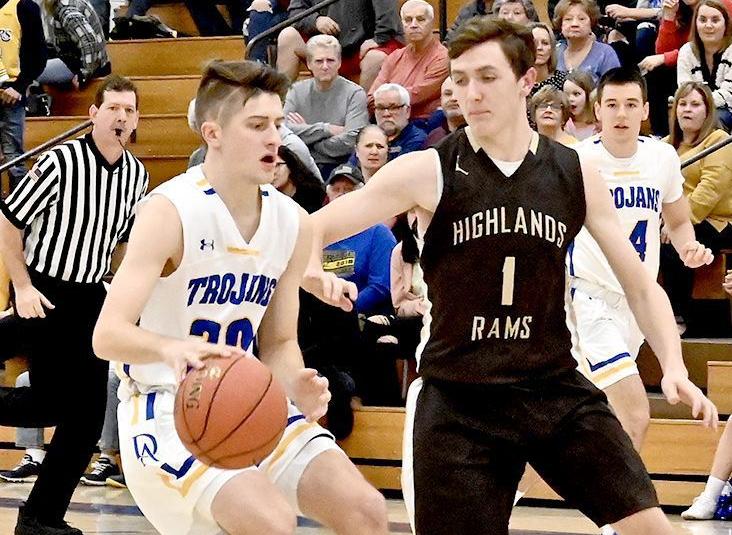 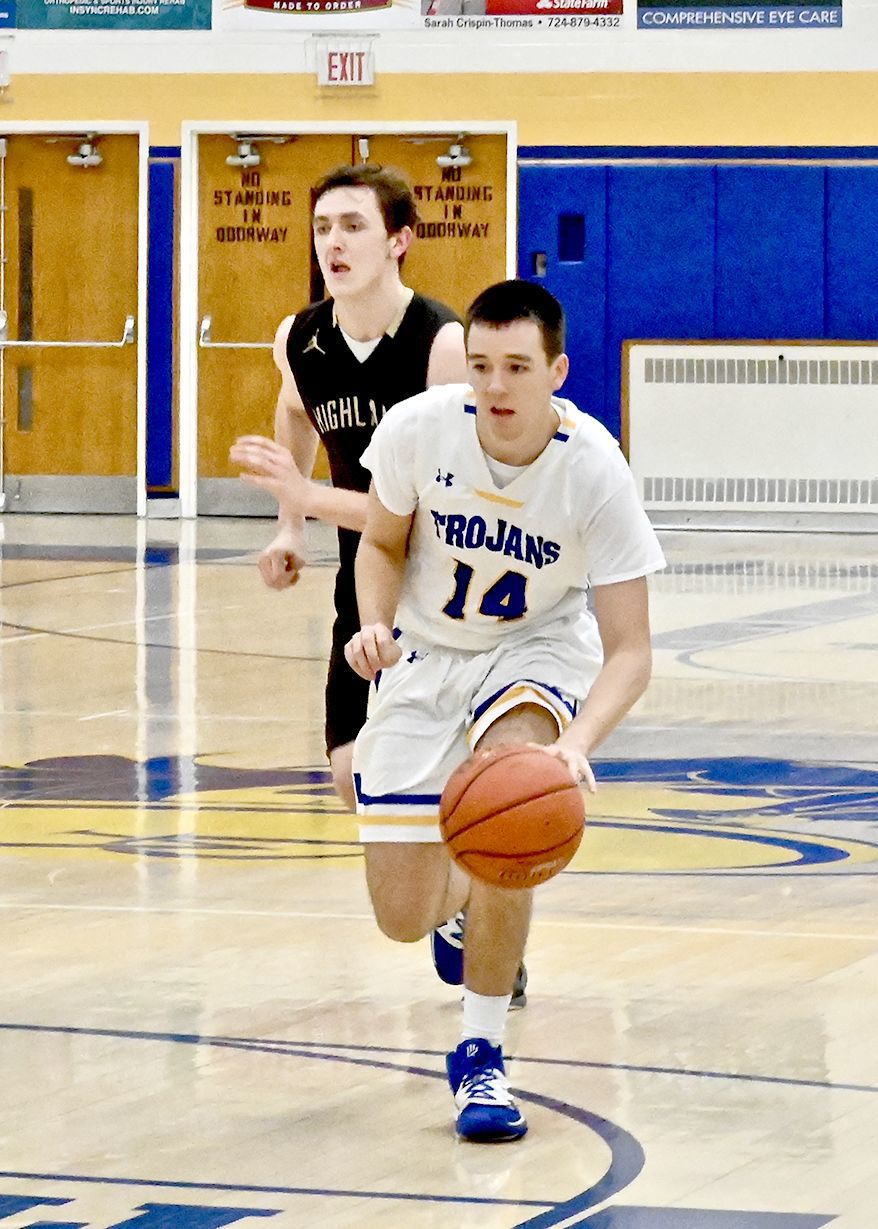 Derry Area’s Tanner Nicely brings the ball down the floor during Tuesday’s WPIAL Class 4A Section 1 game played at Derry Area. Nicely scored 14 points for the Trojans in defeat. 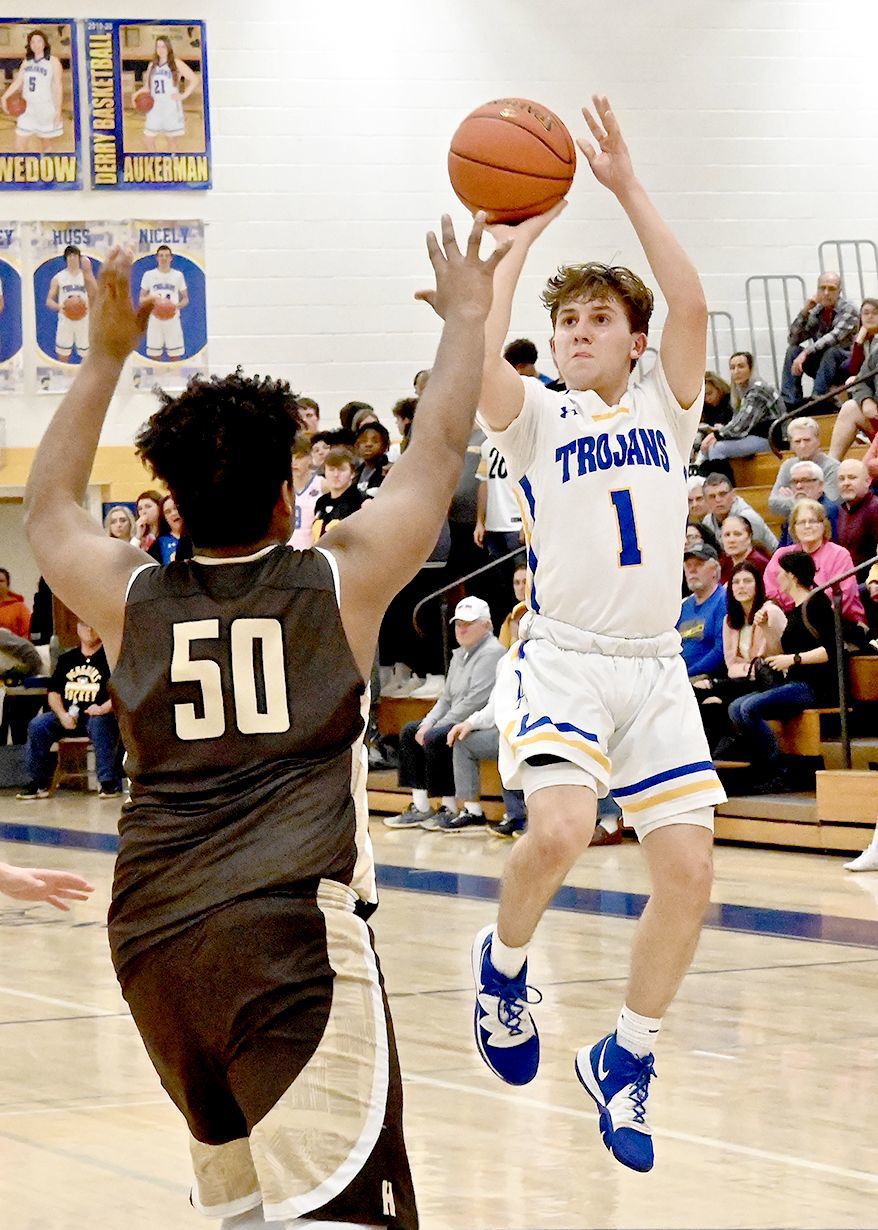 Derry Area’s Tanner Nicely brings the ball down the floor during Tuesday’s WPIAL Class 4A Section 1 game played at Derry Area. Nicely scored 14 points for the Trojans in defeat.

The Derry Area boys’ basketball team fell by 24 points against Highlands on Tuesday night, but the gap was significantly closer.

Highlands eventually pulled away for an 81-57 victory during a WPIAL Class 4A Section 1 game played at Derry Area, but the Trojans had their chances against one of the top teams in the classification.

“The final score isn’t indicative of how much we were in the game,” Derry Area coach Tom Esposito said. “For most of the game, it was a 12- to 14-point difference and we cut it to eight twice and six in the third.”

Derry Area trailed by six in the third quarter, but the Trojans couldn’t get a stop or a bucket to continue cutting into the Rams’ lead.

That dropped Derry Area to 2-3 in section play and 4-9 overall, good for fourth in the section behind Mount Pleasant (3-2, 8-6), which is third. The Vikings, who edged out the Trojans by two points earlier this month, will visit DA on Friday, Jan. 24.

Derry Area travels to Penns Manor Area om Friday (7:30 p.m.) for an exhibition game. The Trojans return to section play at Freeport Area (1-4, 3-8) on Jan. 21 and begin the grind of the second half of section play.

The Trojans edged out Freeport Area, 59-57, on a pair of late Tyson Webb free throws at Derry Area on Dec. 20. It was the same game where the Trojans lost senior standout Justin Huss for the season to a broken leg.

Luke Cochran scored a game-high 24 points to pace Highlands while Korey Myers and Johnny Crise both followed with 21 points.

Esposito feels the competition could benefit his group.

“This was a game against a (potential) WPIAL championship team that is well-coached, has size, good shooters, athletic and quick,” Esposito said. “It’s going to make us a hungry team in the second round of the section.”

The Trojans put together a rally in the third quarter, but it just wasn’t enough.

“Our guys played intense and hard,” Esposito said. “We worked hard to cut the lead to six and eight points, yet we couldn’t get that next stop or bucket.”

Then, Highlands, ahead by 13 points entering the final eight minutes, capitalized in the fourth quarter and pulled away for the eventual win.

No worries from Esposito, though. His group ultimately came up short, but managed to stand toe-to-toe with one of the top teams in the classification.

“A loss is a loss, and we’re very disappointed,” Esposito said. “But I’m proud of our guys’ effort and how they didn’t back down against one of the best 4A teams in the state.”