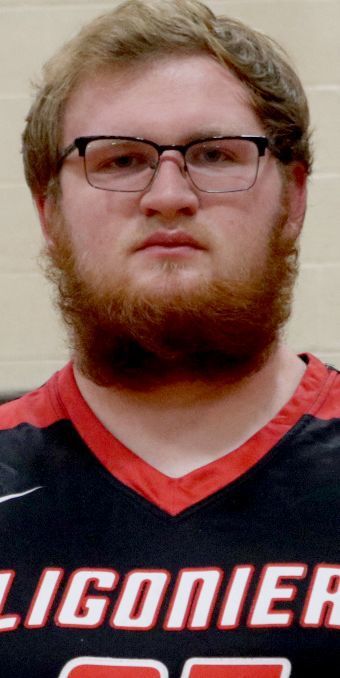 Ligonier Valley boys’ basketball coach Tim Gustin has been preaching defense consistently to his team throughout the past couple weeks.

The Ligonier Valley defense showed up on Wednesday night, as the Rams posted a 69-47 victory against Southmoreland during a WPIAL Class 3A, Section 3 game at Ligonier Valley.

The Rams’ defense forced 26 turnovers, many of which led to easy layups on their end of the court. Gustin said he was proud of the defensive effort his team showed on Wednesday.

“I didn’t know how many turnovers we had but we did a really good job of making them turn it over and pick up the pressure,” Gustin said. “Usually (Southmoreland) is the team that presses people, today we were the ones that pushed the issue on them.”

Gustin said he challenged his team at halftime to turn up the pressure on defense and limit the scoring from the Scotties. The Rams certainly succeeded, holding the Scotties to 22 points total in the second half, and just five points in the fourth quarter.

“We held them under 50 (points) and that was kind of the goal in the second half,” Gustin said. “We wanted to make sure they didn’t get over 50 points in the second half and we did that holding them to only 47.”

It wasn’t just the Ligonier Valley defense that helped lead the Rams to a blowout victory. Ligonier Valley also outrebounded the Scotties 38-20 on the glass. Gustin said he’s told his team that they have to rebound better.

“The last three days after what happened up at Kiski, we worked on defense and rebounding (in practice),” he said. “I am definitely glad to hear (the number of rebounds) we secured. We reached one of the goals we have been striving for the past couple of days.”

Ligonier Valley leading scorer, Matthew Marinchak had another big night on Wednesday. Marinchak came into the game averaging 22.8 points per game and had four 30-point games already this season through nine games.

On Wednesday Marinchak didn’t quite get to 30 points, but he was close. Marinchak ended with a double-double, scoring 25 points, and grabbing 10 rebounds. Seven of those rebounds came in the second half. He also had four assists.

“(Marinchak) does it all, he’s (in the gym) working all the time,” Gustin said. “(Marinchak) has earned all of the accomplishments he has gotten, and he’s worked hard to get there. As a coach it’s easy when you can just say, hey Matt go make a play now, and he makes plays.”

The Rams also got nice production from their other starters as well. Dylan Rhoades joined Marinchak in double figures, as he had 11 points and grabbed five rebounds. Jude Grzywinski added nine points, while grabbing six rebounds.

Jaicob Hollick who has been injured for the last three weeks, returned to the rotation, scoring eight points and grabbing four rebounds off the bench.

“Hollick has been hurt for the last three weeks, so it was nice to get him back in the rotation,” Gustin said. “(Jaicob) is still not 100% yet but it’s always nice to have a three-year starter back in the game.”

Gustin was pleased with other players who came off the bench and gave the Rams quality minutes. Jimmy Pleskovitch and Connor Tunstall combined for five points and five rebounds.

Both teams started out hot offensively in the first quarter, with Scotties holding a slight advantage at 6-5.

From that point on it was all Ligonier Valley. The Rams went on a 14-0 run to get the score to 19-6, forcing Southmoreland to call a timeout with 2:53 left in the quarter. The Rams continued to apply defensive pressure as they held an 11-point advantage, 24-13, heading into the second quarter.

In the second quarter, the Scotties fought back. They went on a quick 10-4 run to cut the Ligonier Valley lead to just five points at 28-23, but that’s the closest they got the rest of the game. The Rams ended the half on an 8-2 run, including a couple of layups from Grzywinski to take a 36-25 lead into the halftime break.

The Rams scored the first four points of the third quarter to take a 40-25 lead, all four points coming from Joey Kondisko. But the Scotties bounced back, playing the Rams even the rest of the quarter. Ligonier Valley maintained an 11-point lead, 53-42, heading into the final quarter.

“Like every coach does, we said new year, new season,” Gustin said. “We kind of took that away, we did a lot of good (before the new year), we just didn’t finish out games. This week we said we had to come out and execute and get a win and we did that tonight.”

The Rams return to action, 7:15 p.m. Friday with a home section game against Valley. Ligonier Valley already met Valley once this year at the Plum tip-off tournament in early December. Ligonier Valley defeated Valley, 78-72, in double overtime, as Marinchak became the 13th player in school history to score 1,000 points in that game.