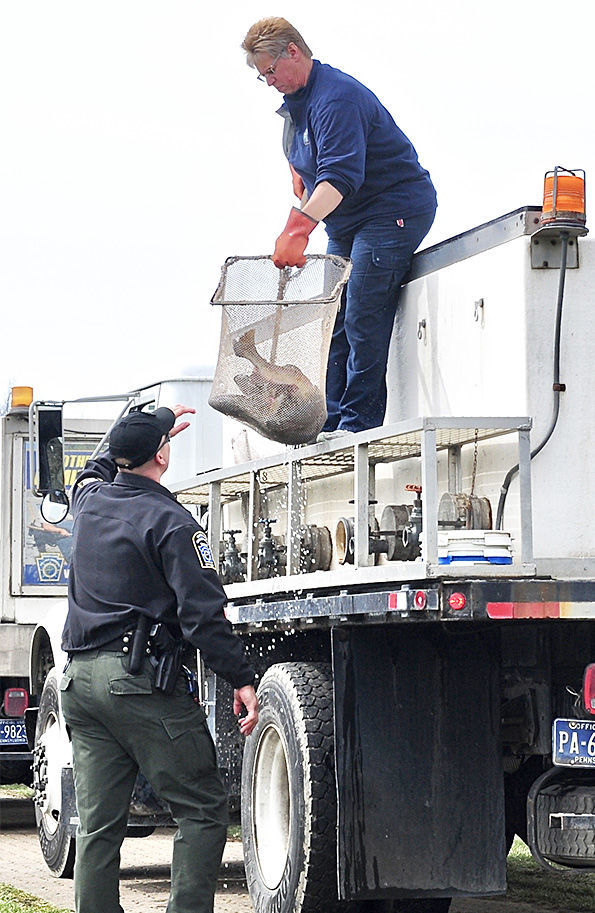 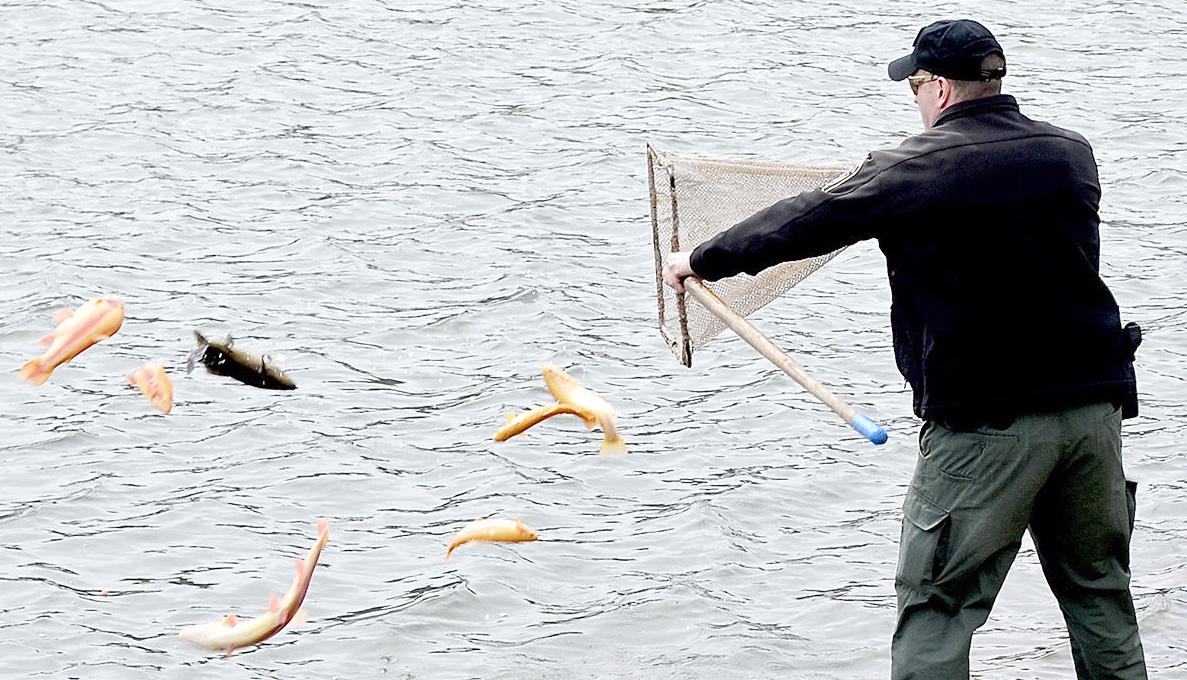 Waterways Conservation Officer Sgt. Matthew Kaufman puts a net of fish, including palomino, into Mammoth Lake on Wednesday. The organization is doing its work early in order to empty their runs in case the coronavirus outbreak gets worse and conditions prevent the stockings.

Waterways Conservation Officer Sgt. Matthew Kaufman puts a net of fish, including palomino, into Mammoth Lake on Wednesday. The organization is doing its work early in order to empty their runs in case the coronavirus outbreak gets worse and conditions prevent the stockings.

When Derry Township’s Mike Ruby tied on a Leland’s Crappie Magnet to his line and let it drop in the water and sink to the bottom, he just let it lie.

It didn’t take long for a trout, searching the depths, to suck up that white-colored plastic shaped like a minnow. This wasn’t a one-time event.

No sooner did he repeat his tactic that he pulled in a rainbow followed by a 10-inch brown trout.

Such a procedure had to be named. It was identified as “Doing the Mike.”

He wasn’t the only fisher who used this tactic. Last year, an angler from Pittsburgh used a similar approach.

He tied on a plastic minnow and cast it out to the deep from the shore to the right side of the handicap pier. Every time he projected it out a good 30 to 40 feet and allowed the minnow imitation to hit bottom, he got not only trout and bass but even large perch. Both he and Mike threw the catch back into the waters.

Both gentlemen were perplexed that simplistic maneuvers added pleasure to their outing as there was no work entailed as some may think.

Bait fishermen will tell passersby that fishing with powerbait of every size and description is easy and requires minimal tasking. Just hook the roundballs or paste formed into little balls onto hooks along one’s line, casted in the rippling waters of a stream or under the calmness of lake waters, and trout will find them a treat at best.

I devised a three-loop rig of which I only use one at a time. I use a No. 6 double hook and slid it into place, allowing it to dangle in place.

I then put a waxworm on the two hooks. When I drop the line over the boat’s bow, I just allow it to sink naturally.

Remember, hooks are weights in and of themselves. One can add a small split-shot onto his line.

Be cautious, however, for too much weight will cause an unnatural presentation that fish can detect. It is better to have less weight on one’s line than too much. Fish can detect that which isn’t normal or ordinary.

The reason I like double hooks is that I don’t have to thread my line through the eyelets of the hooks, which takes more time than I wish to admit. With a double hook, all I do is slide it on, stick the bait on the spikes of the hooks and toss my line outward to the required depths.

If a person is going to use nightcrawlers, I firmly suggest to not use the whole creature. A piece one and one-half to two and one-half inches is all one needs.

Too much worm may turn a fish off rather than invite it for a welcome meal. Wear plastic gloves so fish don’t detect the odor of your person.

When I think of simplicity, I don’t pack up my little box of lures with more than I’ll ever use.

I know a gent from Latrobe who fishes with the same lure on every trip out.

I’ve seen sportsmen and women come to lakes toking boxes of lures and everything imageable, never use the contents, and cart them back home. All one is doing is burdening himself with stress. Keep it simplistic.

One more thing. Keep in mind, initially, that a lighter line will enable the bait to go farther.

One Latrobe fisher told me he uses nothing but two-pound test. Before he nets his catch, he just tires the fish out before bringing it in.

Otherwise, stick with a good four-pound test line, for now.

Keep in mind. If there is evidence of swirls in one’s line now, change it. You want all your tools in best condition possible.

Before you head out to the wonderful commonwealth waters, put some thought into what you may be taking. Keep you lures to a minimum.

And while you are at it, grab something to sit on. Taking a load off your feet may be just what the doctor ordered!