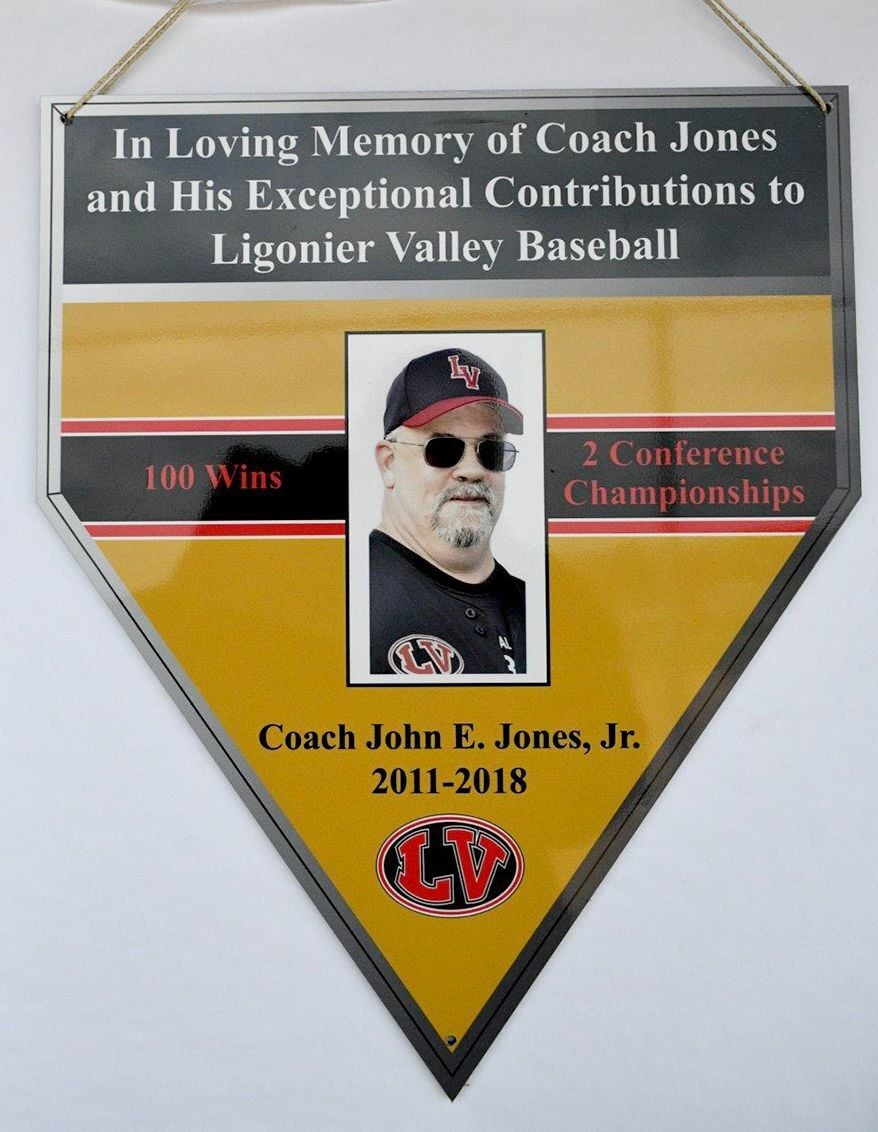 This game wasn’t about the Rams’ on-field performance. The Rams spent Friday afternoon on the diamond honoring the memory of an old friend and leader of the program.

Prior to the game, the Ligonier Valley baseball program dedicated a metal plaque to its former coach John E. Jones Jr., who passed away in December. The plaque will be mounted in the dugout, as a permanent keepsake and reminder of Jones’ legacy and impact on the program.

“The ceremony, along with coach Jones’ plaque, was a nice tribute to everything he has been able to do for the baseball program here at Ligonier Valley,” Marabito said. “Coach Jones had a love for the game, and even more for his players, and that is what it means to be a coach at the high school level. He cared deeply about the success of his players, even after they were through with their careers at Ligonier Valley.”

Jones was active with the Ligonier Valley high school baseball team from 2011-18, winning 100 games and two conference championships. He coached his three sons, John Jones, Jordan Jones, and Hunter Jones, on their Ligonier recreation teams, and through their high school years.

“It was special for myself to be able to share the moment with his son, John, who I played with through high school and also AAABA for seven years,” Marabito said. “His other sons, Jordan and Hunter, were also very appreciative of the program paying tribute to their father, who really meant a lot to the success we’ve had over the years.”

Jones last coached at Ligonier Valley during the 2018 season. He led the Rams to an 11-8 record, including an 8-4 mark in District 6 Heritage Conference play. Ligonier Valley fell to Penn Cambria in the District 6 Class 3A quarterfinals that season. The Rams were a perennial playoff team in Jones’ eight-year tenure as head coach.

Current assistant Tim Caldwell was also an assistant with that team.

“It was special for my assistant, Tim Caldwell, to pay one last tribute to the man who got him involved with the program, and has been a tremendous help to me over my short career here,” Marabito said.

The two teams combined for 29 runs on 17 hits in the game.

“We’re a young team all around without much experience, so we’re going to take our lumps,” Marabito said. “But, we have to be willing to keep building, as the inexperience card only lasts for so long.”

Ligonier Valley is 5-5 overall. The Rams won their first four games of the season, including two section games against East Allegheny, the Rams’ first since returning to the WPIAL.

Ligonier Valley has lost five times in the last six games. The Rams dropped back-to-back games against Somerset Area and Deer Lakes, and routed Leechburg Area, prior to consecutive defeats against Derry Area, and now Friday’s home setback to Steel Valley. The Rams have been outscored, 66-41 in their last six games.

Ligonier Valley, which is 2-3 in section play, is scheduled to visit Valley, 4 p.m. Monday before hosting the Vikings the following day. The Vikings are currently second in the section with a 3-1 record and a 7-2 overall mark.

“I’m confident we’re going to bounce back,” Marabito said. “We have a great group of kids who put in the work. We just have to put it all together.”

Lucas Mills guided Ligonier Valley at the plate with two hits, including a double and three runs scored. Connor Tunstall posted two hits, including a double and a RBI, while Haden Sierocky also doubled, scored and drove in two. Mason Seftas singled and scored, while Grant Dowden had a triple and three RBI. George Golden also scored two runs and drove in three, while Nick Beitel crossed three times for the Rams, who posted 11 runs on seven hits.

Ligonier Valley used five pitchers, who combined to give up 18 earned runs on 10 hits with eight strikeouts and 12 walks.

“We just have to get better on the mound,” Marabito said. “When you score 11 runs, you should be able to come out with a win, but we give up too many free passes on the bases right now.”

Joey McMahon led Steel Valley at the plate with three singles, a run and four RBI, while Noah Donis singled twice and scored three times. Roman Donis and Ayden Varhola both had a hit and two runs, while Zack Woolheater doubled and crossed twice. Tony Salopek and Jimmy Auberzinsky singled and scored, while Michael Twigg scored three runs and Aidan Good two for the Ironmen, who pounded out 18 runs on 10 hits.

Auberzinsky was the winning pitcher. He allowed five runs on three hits with seven strikeouts and five walks in three innings.

Varhola drew a four-pitch walk for the first run of the game, while consecutive sacrifice flies and a stolen base gave Steel Valley a 4-0 lead. Beitel scored Ligonier Valley’s first run following a dropped third strike, while Golden’s sacrifice fly plated Mills, as the Rams trailed by two runs.

That changed in the top of the third when Steel Valley put up seven runs. Three walks and two hit batsmen scored five runs, as Steel Valley took a 9-2 lead. A Noah Donis single scored a pair to make it, 11-2.

But the Rams fought back with three runs in the bottom of the inning. Sierocky doubled home Beitel, while Golden’s sacrifice fly plated Mills. Seftas singled home Sierocky to make it an 11-5 game.

Again, the Ironmen had an answer, this time with three runs in the top of the fifth. Noah Donis drew a four-pitch walk that scored Woolheater, while a single and a sacrifice fly made it, 14-5. The Rams fought back in the bottom of the inning when Tunstall doubled home Golden, who reached on an error. Broderick Schreyer drew a walk that scored Seftas, as the Rams cut the Steel Valley lead in half, 14-7.

The Rams plated two more in the bottom of the sixth when Dowden’s triple scored Mills and Golden to make it a 14-9 game.

Steel Valley capped its scoring with four runs in the top of the seventh. McMahon’s single scored Twigg and Noah Donis, while another single and an error made it 18-9. Ligonier Valley set the final in the bottom of the inning with consecutive walks by Golden and Dowden scored Lanigan McCulty and Beitel.