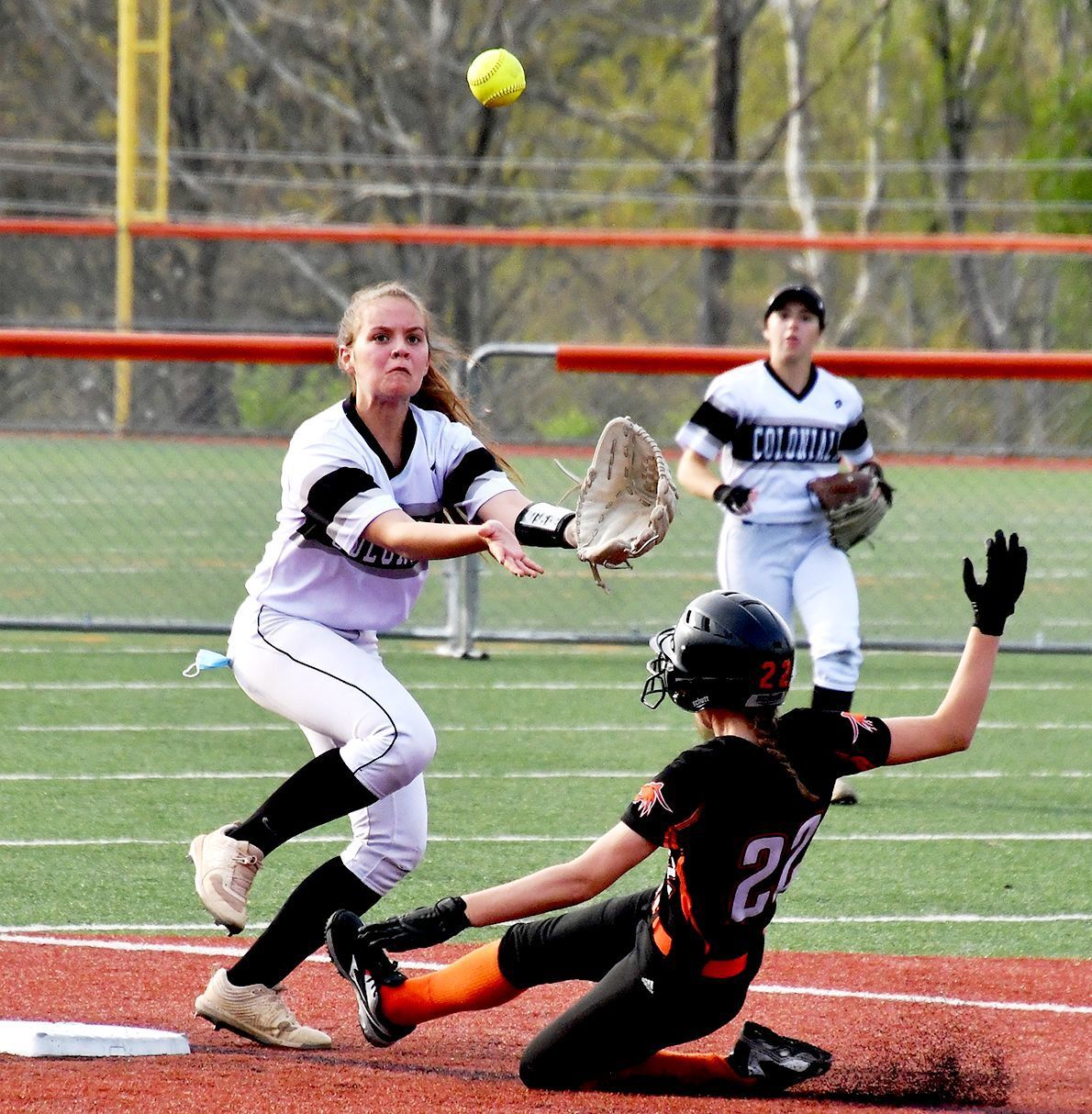 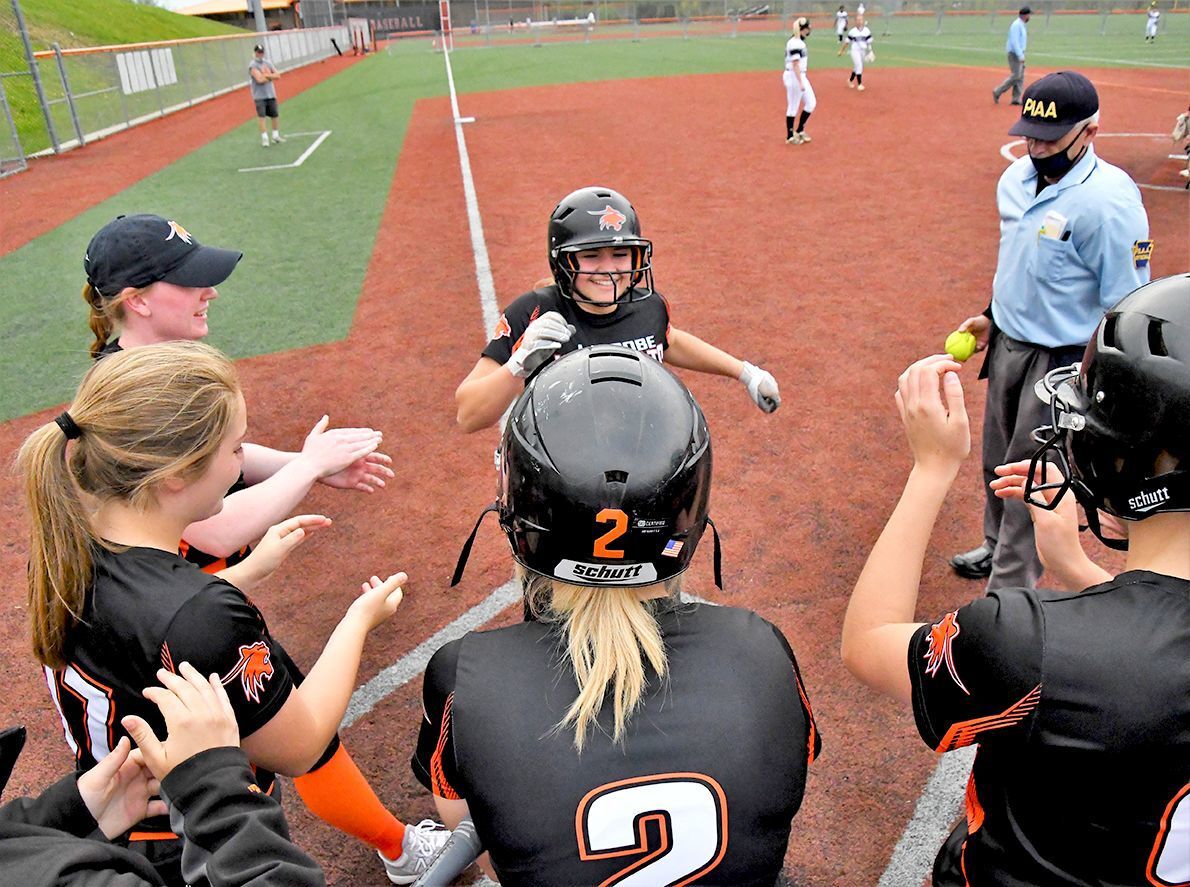 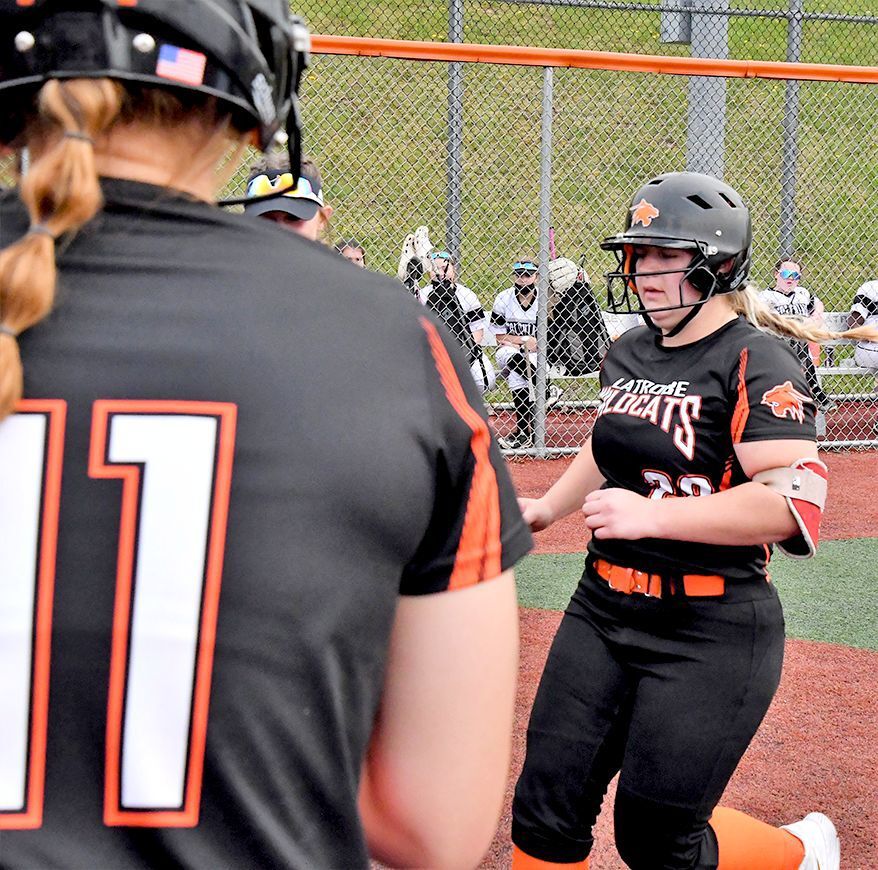 Greater Latrobe’s Jenna Tallman prepares to touch home after belting a home run in the bottom of the third during a WPIAL Class 5A, Section 2 game against Albert Gallatin on Wednesday at Graham-Sobota Field. Tallman helped the Lady Wildcats improve to 2-1 in the section and 4-3 overall following a big 10-0, five-inning, mercy-rule home section win. 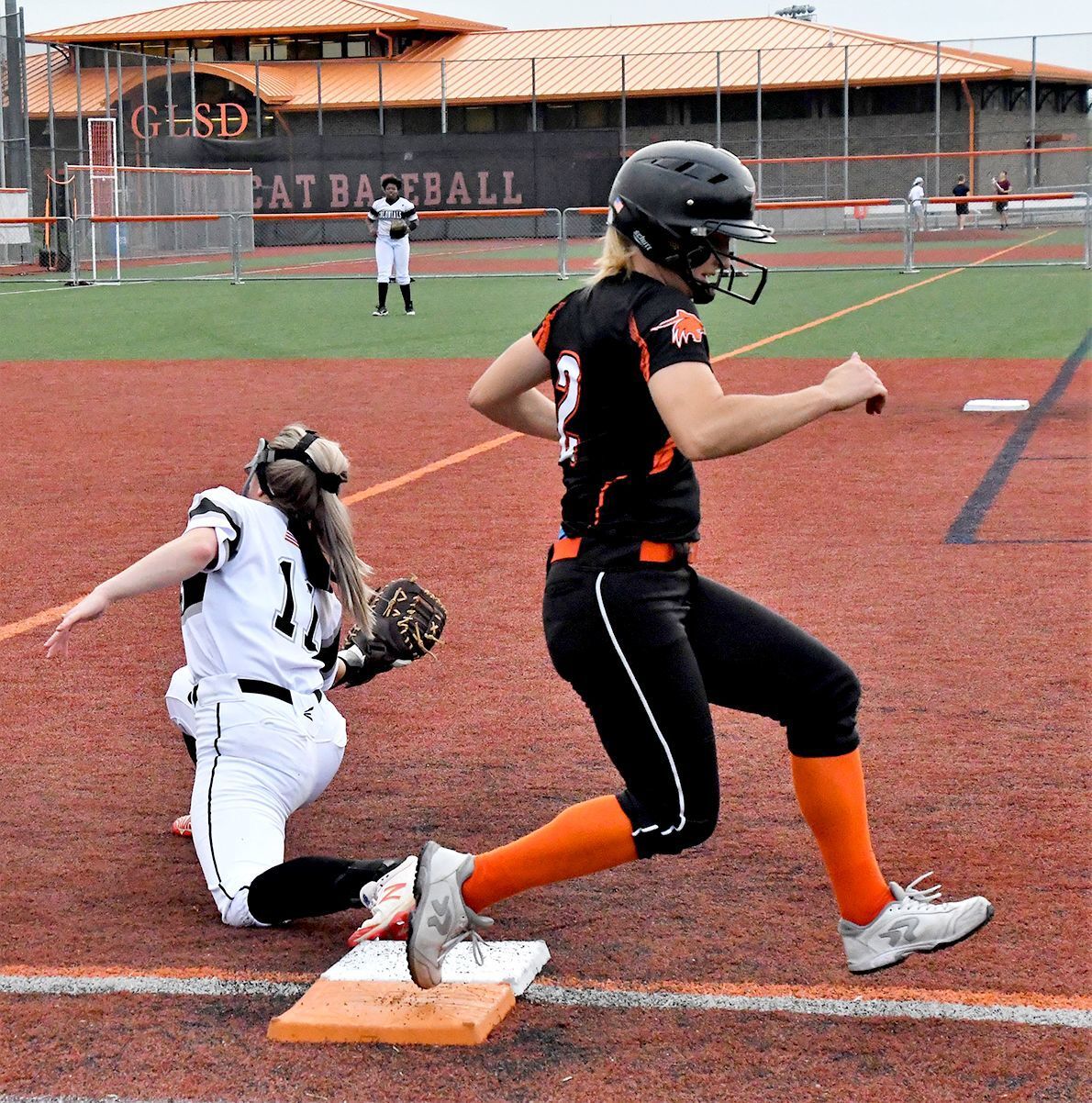 Greater Latrobe’s Jordan Novak is out following a close play at first base during a WPIAL Class 5A, Section 2 game played Wednesday against Albert Gallatin at Graham-Sobota Field. Greater Latrobe scored nine runs in the bottom of the third en route to a 10-0 victory.

Greater Latrobe’s Jenna Tallman prepares to touch home after belting a home run in the bottom of the third during a WPIAL Class 5A, Section 2 game against Albert Gallatin on Wednesday at Graham-Sobota Field. Tallman helped the Lady Wildcats improve to 2-1 in the section and 4-3 overall following a big 10-0, five-inning, mercy-rule home section win.

Greater Latrobe’s Jordan Novak is out following a close play at first base during a WPIAL Class 5A, Section 2 game played Wednesday against Albert Gallatin at Graham-Sobota Field. Greater Latrobe scored nine runs in the bottom of the third en route to a 10-0 victory.

Even if Greater Latrobe did bat just four times, it was nice just to get back on the field after seven days of no girls’ softball games because of two postponements.

And it’s safe to say that the Lady Wildcats sort of made up for lost time.

In only those four at-bats, Greater Latrobe, after somewhat of a slow start, pounded nine hits, including four for extra bases — and two of those out of the park — and got a combined one-hitter from sophomore Josie Straigis and freshman Kayla Williams for a 10-0, five-inning mercy-rule home section win over Albert Gallatin Wednesday night at Graham-Sobota Field.

“We had some strikeouts and didn’t hit the ball too hard there in the beginning,” Greater Latrobe head coach Bob Kovalcin responded. “Then, we started to get on to it.”

The Lady Wildcats are now 2-1 in WPIAL Class 5A Section 2 and 4-3 overall. Albert Gallatin is still winless in the section at 0-5.

Except for the No. 9 batter, it took Greater Latrobe one time though the order to really get its timing down against Albert Gallatin (2-5 overall) freshman pitcher Ashley Metts.

In the bottom of the first, the Lady Wildcats went three-up, three-down. They then squeezed out a run in the bottom of the second on a walk, stolen base, single and a wild pitch before busting it open in scoring nine times in the third.

“The girls have to stay focused on what they’re supposed to do, which is to track the ball to the bat and then drive it. As long as they do that, they’ll be fine.”

As for Straigis and Williams — who will get the ball in the circle for Greater Latrobe for at least as long as it takes senior Jordan Tallman to recover from a wrist injury after being struck by a line drive in the Lady Wildcats’ previous game nine days ago — they also combined for eight strikeouts. In addition, they allowed only one AG runner to make it into scoring position...and only then because of a passed ball and a wild pitch in the first inning.

“They both can pitch,” Kovalcin indicated. “I think they showed that today.

“They can hit their spots. That’s all we need them to do.”

That base-runner for the Lady Colonials was Metts, who — with two outs — reached on an error and advanced on the passed ball and wild pitch. But Metts started home after another wild pitch only to have junior catcher Jenna Tallman get to the ball quickly after it bounced off of the backstop and was thrown out trying to get back into third.

Greater Latrobe and Albert Gallatin then went in order in their subsequent turns at-bat. That’s when the Lady Wildcats scored the game’s first run in the bottom of the second.

Jenna Tallman led off with a walk, and courtesy runner Lauren Weatherton swiped second. Senior third-baseman Alaura McHenry then blooped a single to center, but Weatherton was forced to hold up at third.

With no outs, McHenry stole second. Following a strikeout, a wild pitch brought in Weatherton. However, McHenry was stranded at third when the next two Lady Wildcat batters also struck out.

After Straigis retired the Albert Gallatin side in order in the top of the third — she did so two other times, as well — Greater Latrobe sent 12 batters to the plate in the home half of the inning with nine of them scoring. And it all began when senior first-baseman Grace Revitsky, at the bottom of the lineup, legged out a double that ticked off the glove of AG’s Lilly Wilson down the third-base line.

Back at the top of the order, sophomore designated player Sydney DeGram attempted a sacrifice bunt to third, but a throwing error resulted in Revitsky scoring. On the play, DeGram made it all the way around to third.

Senior shortstop Jordan Novak then grounded out to third, but DeGram came in, and it was 3-0. The next seven batters for the Lady Wildcats then registered hits, four of them driving in runs.

The first of those hits was a single down the third-base line by senior center-fielder Emily Schmucker, who then stole second. Then, on a full count, Jenna Tallman belted one well over the fence in right field.

But Greater Latrobe wasn’t done...not by a long shot.

McHenry singled between short and third, and senior right-fielder Hanna Brewer beat out an infield hit. She was followed by junior left-fielder Bailey Watson, who came through with an RBI-single up the middle, plating McHenry and moving up Brewer to second.

It was senior second-baseman Lauren Bisignani’s turn, and she sent a double over the right-fielder’s head to score Brewer and make it 7-0 with Watson going to third. Batting for the second time in the inning, Revitsky drove a pitch over the fence in left-center for a three-run homer before Metts got a tap back to her and a strikeout to finally end the inning.

The only hit — and just the second base-runner — for Albert Gallatin, meanwhile, came in the fifth when Wilson singled up the middle off of Williams, who took over for Straigis. But Williams then fanned three straight batters to end the game.

“The seniors played well,” Kovalcin noted. “They’ll get another shot to start (today).”

The Lady Wildcats are scheduled to play at Gateway today in another section matchup. However, the forecast is calling for rain and possible thunderstorms.

Kovalcin was also able to get a lot of players into Wednesday’s game. Seven of the 16 accounted for the team’s nine hits, including two — McHenry and Revitsky — with a pair each.

And some of those played in a junior varsity tournament last Saturday at Ligonier Valley that was won by Greater Latrobe. In four games, the Lady Wildcats outscored their opponents, 52-2, including 13-0 in the championship game against the winner of the other pool.

“That’s why some of the younger girls made good contact and hit the ball better today,” Kovalcin reasoned. “As long as we can play defense, put the bat on the ball and the girls keep their heads in the game, we’ll be good.

“But this was just one game. We’ve got a lot more games to play and a lot more to work on.”