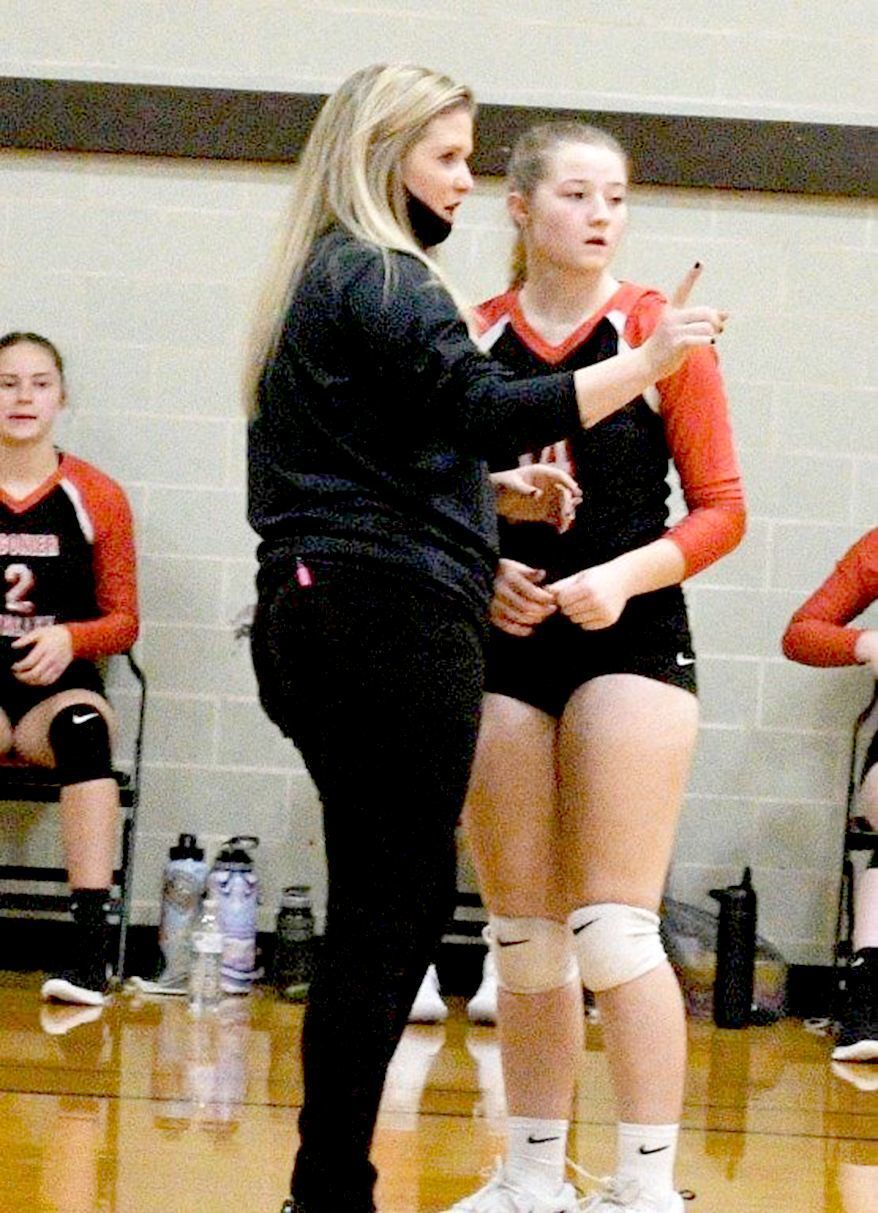 Ligonier Valley girls’ volleyball coach Emily Daugherty discusses strategy with senior Bella Vargulish during the Lady Rams’ first-ever WPIAL playoff match held last month. The Lady Rams won a play-in match against Southmoreland before they were eliminated by No. 2 Ellwood City — the district runners-up — in the first round of the WPIAL Class 2A playoffs. 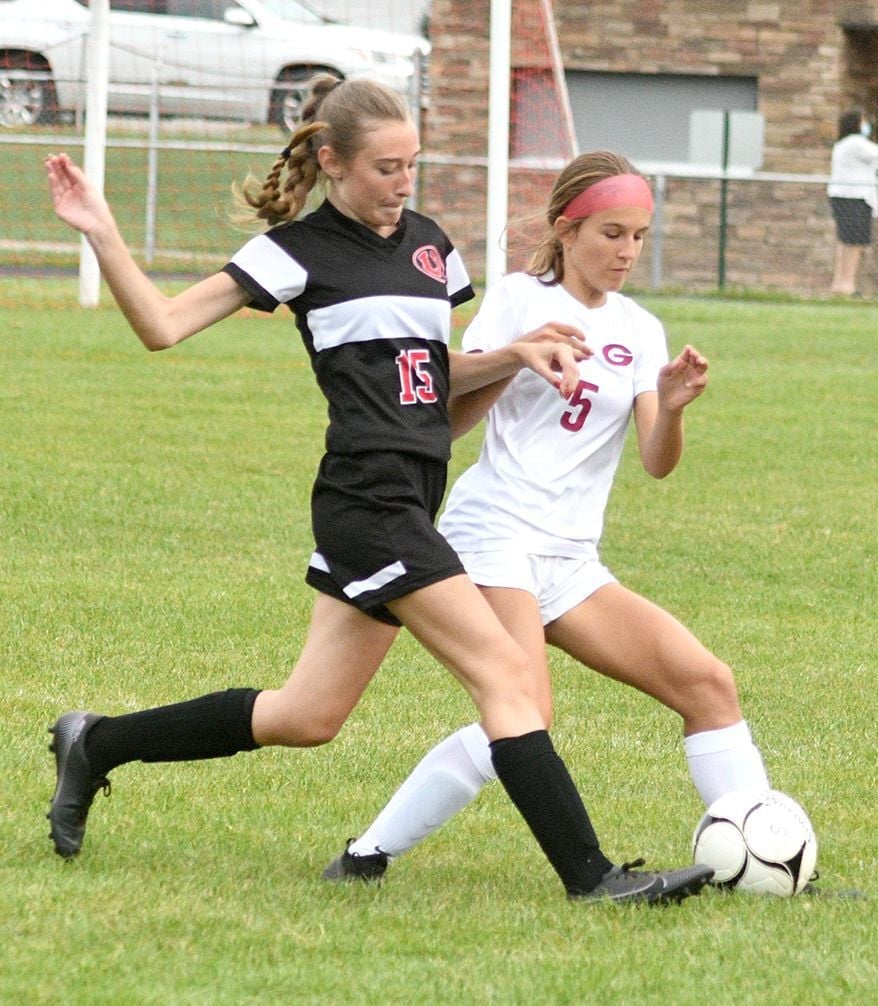 Ligonier Valley’s Emmie Horner and GCC’s Antonia Stickle battle for a ball at midfield during a regular-season game played at Weller Field. The Ligonier Valley girls’ soccer team advanced to the WPIAL Class 1A playoffs, but lost to No. 2-seeded Steel Valley in the opening round. GCC captured the district championship and will play Cambridge Springs in the state semifinals 5 p.m. tonight at Norwin Senior High School.

Ligonier Valley girls’ volleyball coach Emily Daugherty discusses strategy with senior Bella Vargulish during the Lady Rams’ first-ever WPIAL playoff match held last month. The Lady Rams won a play-in match against Southmoreland before they were eliminated by No. 2 Ellwood City — the district runners-up — in the first round of the WPIAL Class 2A playoffs.

Ligonier Valley’s Emmie Horner and GCC’s Antonia Stickle battle for a ball at midfield during a regular-season game played at Weller Field. The Ligonier Valley girls’ soccer team advanced to the WPIAL Class 1A playoffs, but lost to No. 2-seeded Steel Valley in the opening round. GCC captured the district championship and will play Cambridge Springs in the state semifinals 5 p.m. tonight at Norwin Senior High School.

This has already been quite the school year for Wesley Siko, and it just started.

So, too, did Siko. Not only is this his first year as Ligonier Valley’s athletic director, he’s less than six full months in.

First, Siko — and the rest of the school district and it’s coaches, along with those across the state — has had to deal with coronavirus (COVID-19) protocols.

And, as if that wasn’t enough, there was Ligonier Valley’s move back to the WPIAL after more than a half-century in District 6.

At first, those two things kind of conspired against Siko. But with the help of Corey Turcheck, who served as athletic director for four-and-a-half years, fall sports coaches and the higher-ups in the school district and WPIAL, it’s gone maybe better than Siko could’ve expected with a couple of Ligonier Valley’s teams having also qualified for the playoffs.

“It was a challenge, for sure, with me not knowing the (District 6) Heritage Conference and the transition, just because I wasn’t sure where we were and needed some insight as to where we were going to,” Siko explained. “But at the end of the day, it worked out well.

“It was an easy, seamless transition, and Corey was a big part of that. He assisted me as much as he could.”

Ligonier Valley’s athletic director from November of 2015 to June of this year, Turcheck is now a full-time teacher in the district. His classroom is also right down the hall from Siko.

“He been great and understands what it takes to get things done,” Siko expressed. “He’s been very welcoming with any questions I might have.

“I was approved by the school board before my June start, and he agreed to meet with me a couple times before that just to go over some things. Then we met a few more times just to make sure that I was good to go.

“But I can’t stress enough how great he was with the transition. If it wasn’t for him, it would’ve been a lot more difficult.”

After graduating from Greensburg Salem High School in 2006, the 32-year-old Siko earned his bachelor’s degree in accounting and business administration at Thiel College in Greenville, where he also played basketball for four years. He then earned a masters degree in sports management from Indiana University of Pennsylvania in 2014.

“It was one of those things where that’s what I thought I wanted to do,” Siko said of his first choice of studies. “But I decided later to go back and pursue something that I really enjoy, and that is athletics.”

Siko then served as an assistant varsity basketball coach at Indiana Area High School, and worked in the athletic departments at Carnegie Mellon University in Pittsburgh and Misericordia in Dallas, Pennsylvania. From there, he was an operations manager at Towson (Md.) and with the Oak View Group at Robert Morris University in Pittsburgh prior to being hired at Ligonier Valley.

“It was really great to have the support of the administration to go through this. I couldn’t have done it any other way,” Siko stated.

“When you add COVID into the equation, it was more of a challenge that way, just because of all of the protocols and guidelines and things like that. But everyone’s been great, including those at the WPIAL office.

“And our fall coaches have been wonderful in helping me get to where we needed to be. It was just such a team effort from top to bottom.”

Speaking of that, two of Ligonier Valley’s fall sports teams were able to make the playoffs in their first year in the WPIAL. That’s not lost on Siko or the coaches of those teams, either.

“We’re pleased with the move,” said head girls’ soccer coach Eric Vogelsang. “It was more challenging, but it’s where we need to be.

“It’s going to make our teams better. Even as a coach who lost a lot of games this season, I’m thrilled with the decision.”

This was Vogelsang’s 19th season, but the first in the WPIAL. And even though the Rams went 2-7 in Section 1-A (4-12 overall), they did advance to the district playoffs as the fourth-place team — after starting the season 0-7 — and all of their losses were to teams with winning records.

Now consider this. They did so with roster of a grand total of 18 players, finished the season with 17, only 11 of whom had soccer experience, and played three games with 12 and one with 11.

“We were putting in girls who had never played in a varsity game before,” Vogelsang indicated. “With that being said, I was not at all upset with the way things went. I was pleased with the way they played and handled things.”

There’s more. Ligonier Valley was only able to play five junior varsity games, and those were seven-on-seven — and not 11 — with a lot of girls who were pressed into varsity duty.

“We picked it up in the second half of the season, which is a testament to the character of the kids,” Vogelsang offered. “It was still a great experience.

“I think the kids realize that. To make the playoffs in the WPIAL is that much more of a bigger deal.”

The Rams were seeded No. 15 in the 16-team field. They lost in the first round against No. 2 Steel Valley.

“It’s all good,” Vogelsang reiterated. “I knew this wasn’t going to be the best team we’ve had, but the girls had a goal and they reached it.

“There was an entirely different atmosphere for our playoff game. I think it was good for our younger kids and a nice sendoff for the seniors.”

Emily Daugherty feels the same way for the girls’ volleyball team. And she also realizes it’s only going to be that much more difficult in the WPIAL.

“It’s a great league to be in,” remarked Daugherty, who was in her second season as head coach. “The Heritage Conference in District 6 was very tough, as well, because there are some teams (West Shamokin, Northern Cambria) that make state playoff runs just about every year.

However, that was only part of it. Once the Lady Rams got past that, they wanted to see how far they could go in the playoffs.

“It was a very exciting time for the girls and the program,” Daugherty continued. “We wanted to go in, see how we did, and if we made the playoffs, even better. We wanted to make a name for our program, and I think the girls did that.”

Ligonier Valley finished third in its section and was seeded No. 15 for the WPIAL Class 2A playoffs. Not only that, the Lady Rams won a play-in match vs. Southmoreland and were eliminated by No. 2 Ellwood City in the first round.

“That was exciting,” Daugherty said of the playoff victory. “It was a good experience in general.

“We really didn’t know how we would do once we got out of our section. I think being able to win a match will help us in the WPIAL going forward.

“Now that the season is over, they want to know what the next step is. They want to put in the work and understand that they’re going to have to.”

Four other Ligonier Valley fall sports participated in their first WPIAL seasons, as well. They were football, boys’ soccer, golf and cross-country. The football team finished the regular season with a 4-3 record and ended with a non-losing record for the sixth consecutive season, a school record.

“I’ve been blown away by the competitive spirit of our athletes and the drive by our coaches to be better, and it truly makes everyone want to work that much harder,” Siko added. “It was truly fun to watch our first season in the WPIAL.”