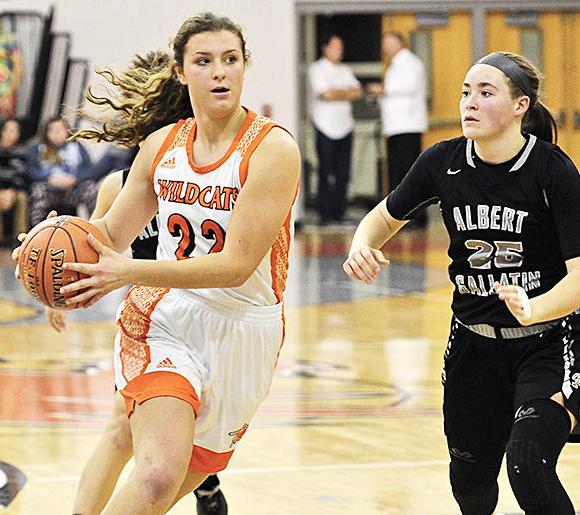 Greater Latrobe’s Anna Rafferty drives past Abby King of Albert Gallatin (left) for two of her 21 points during Thursday night’s WPIAL Class 5A Section 3 opener. Rafferty also had 10 rebounds, but exited the game with 39 seconds left with what appeared to be a serious ankle injury as the Lady Wildcats squandered a 12-point lead late in the third quarter and suffered a 58-57 setback. In photo at right, Rachel Ridilla of GL gets out on a fast-break for a layup. Ridilla finished with 17 points, four rebounds, three steals and two blocked shots. 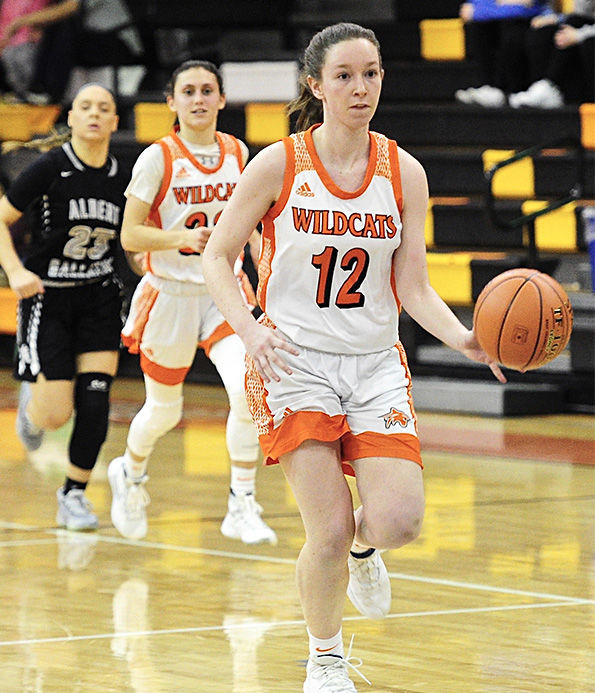 Rachel Ridilla of GL gets out on a fast-break for a layup. Ridilla finished with 17 points, four rebounds, three steals and two blocked shots. 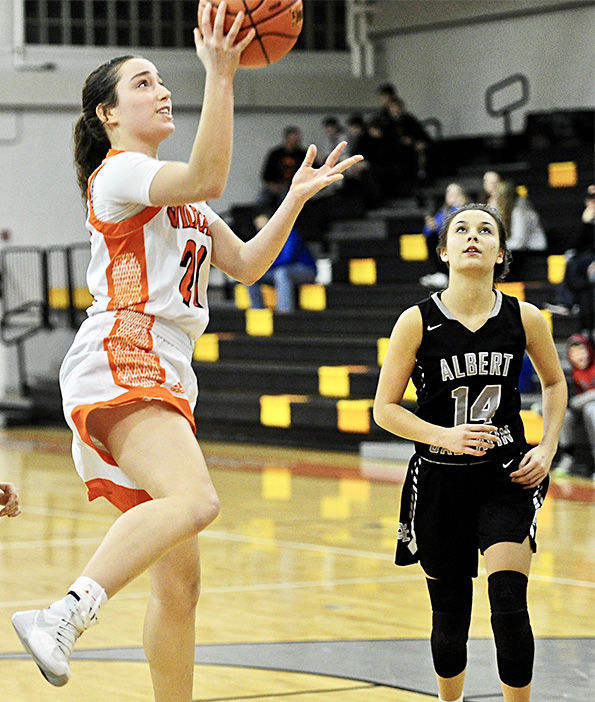 Greater Latrobe’s Lex Pynos goes up for a lay-in as Olivia Miller trails the play for Albert Gallatin. Pynos had nine points and five rebounds.

Greater Latrobe’s Anna Rafferty drives past Abby King of Albert Gallatin (left) for two of her 21 points during Thursday night’s WPIAL Class 5A Section 3 opener. Rafferty also had 10 rebounds, but exited the game with 39 seconds left with what appeared to be a serious ankle injury as the Lady Wildcats squandered a 12-point lead late in the third quarter and suffered a 58-57 setback. In photo at right, Rachel Ridilla of GL gets out on a fast-break for a layup. Ridilla finished with 17 points, four rebounds, three steals and two blocked shots.

Rachel Ridilla of GL gets out on a fast-break for a layup. Ridilla finished with 17 points, four rebounds, three steals and two blocked shots.

Greater Latrobe’s Lex Pynos goes up for a lay-in as Olivia Miller trails the play for Albert Gallatin. Pynos had nine points and five rebounds.

It’s early...only one week into the season.

But, it was a section game for Greater Latrobe and Albert Gallatin since there are so many teams — eight — in said section (WPIAL Class 5A Section 3) in girls’ basketball.

“That doesn’t bother me. Everybody’s in the same situation,” Greater Latrobe head coach Mark Burkardt said of having to play section games this soon.

It was also a section game involving two teams that are going to contend for a playoff spot.

That said, Thursday night’s gut-wrenching, one-point home loss to much-improved Albert Gallatin — after leading by 12 in the final minute of the third quarter and nine midway through the fourth — could come into play when it’s time to decide the teams that go to the playoffs and the ones that don’t.

And that 58-57 defeat could prove costly in another way.

That’s because the Lady Wildcats may have lost — at least for the time being — one of their top players, and one of just two starters back from last season, to injury.

Adding injury to insult, GL’s Anna Rafferty — a 6-foot-1 sophomore forward — twisted an ankle to the point where she couldn’t put any weight on it at all afterward. When she went out, with 39 seconds left and the Wildcats clinging to a three-point margin, Rafferty had a double-double of 21 points and 10 rebounds.

“That can mean a lot of things,” Burkardt said after being told that Rafferty’s injury was initially diagnosed as a severe sprain.

AG’s Bryn Bezjak, a junior guard who was getting to the rim a lot — way too much to suit Burkardt — in the fourth quarter, made the front end of a one-and-one with GL’s Rachel Ridilla rebounding the subsequent miss. Ridilla, by the way — a 5-foot-9 junior guard — is the Wildcats’ other returning starter.

And just when it looked like Ridilla was about to be tied up, Burkardt got a timeout with 35.2 seconds to play. But Greater Latrobe turned the ball over, and the Lady Colonials called their final timeout with 26.9 ticks left.

Albert Gallatin then got a three-point play from 6-foot freshman center Courtlyn Turner at :19.7 for its first lead (56-55) since the 2:56-mark of the second quarter. However, the Lady Wildcats quickly got the ball inbounds to Ridilla — probably the team’s best free-throw shooter — and she calmly stepped to the line after being fouled and converted the bonus to put GL back in front at 57-56 with the clock reading :18.8.

“She made some clutch free throws to put us ahead there toward the end,” Burkardt said of Ridilla, who made all six of her free-throw attempts and finished with 17 points, four rebounds, three steals and two blocks.

Albert Gallatin missed the first shot on its next possession, but Turner scored on a putback. That forced Burkardt to get another timeout with 9.8 seconds remaining.

Senior forward Lex Pynos rebounded a miss, and the ball was eventually knocked out of bounds. But with only nine-tenths of a second left, the Wildcats couldn’t get off a shot as time expired.

It wasn’t too long before that, that GL seemed to have things in hand. After leading by as many as 12 on two occasions late in the third quarter (43-31 and 45-33) and nine halfway through the fourth, it began to unravel for the Wildcats.

And that goes for both ends of the floor. Greater Latrobe seemed to be in a big hurry when it had the ball, and couldn’t stop the Colonials — Bezjak in particular — from going down the lane right to the basket.

“We just made bad decisions in the final four minutes,” Burkardt simplified. “We didn’t take care of the ball, and that was the difference. They did a better job at it.

“We played like we were the team that was behind. We were forcing things that we didn’t need to.

“We wanted to get a few extended possessions, and we weren’t able to do it.

“The other problem was our defense in the fourth quarter,” Burkardt continued. “We didn’t help when Bezjak would beat the first screen. The weak side didn’t come to help, and she was able to get to the basket and score or get fouled...or both.

Burkardt also wanted his team to pull the ball out if it didn’t score in transition. That’s when he wants Rafferty and Emma Blair, a 6-foot freshman, to go to work on the blocks and in a high-low, half-court set.

“They do a pretty good job together for a freshman and sophomore,” Burkardt said, referring to Blair and Rafferty. “We weren’t patient enough to get them the ball enough. When we don’t get an easy basket, we want to be a little more patient to try and open up the post play.

“Not only are we young in certain positions, some of the ones who are out there are inexperienced. It’s just not having been in that situation very many times before.”

The Wildcats did beat Albert Gallatin up the court quite a bit in the first half. GL put up 19 points in the first period that ended with a 7-2 run to go on top by five.

But the Colonials regained a one-point edge following three straight threes, two of those from Albert Gallatin, to make it 27-26.

However, the Lady Wildcats netted the last five points of the second quarter and the first four of the third for a 35-27 advantage — their largest up to then — bringing about a timeout from AG coach Ellen Hildebrand.

After the Colonials cut it to six, Greater Latrobe extended it to 12 twice in the latter stages of the third frame on a three by Ridilla and a hoop from sophomore guard Bailey Watson. It was still double digits (51-40) at the five-minute mark of the fourth when Albert Gallatin made its comeback, outscoring the Wildcats, 22-12, in the final period.

“It was a game of runs,” Burkardt noted. “They got the last one, unfortunately.

Following Rafferty and Ridilla for the Lady Wildcats was Pynos with nine points and five rebounds. No one else had more than two points.

“Tomorrow’s another day,” Burkardt concluded. “We’ll practice and come back and play.”

The Wildcats step back out of section action Saturday (3:30 p.m.) in hosting Ringgold, which is coached by former GL player Lindsy Muchnock. They then travel to Oakland Catholic on Monday (7:30 p.m.) for a section matchup.

GL’s junior varsity improved to 2-0 with a 45-23 victory over Albert Gallatin. Jose Straigis tossed in 22 points, and Abby Shearer 12 for the Lady Wildcats.