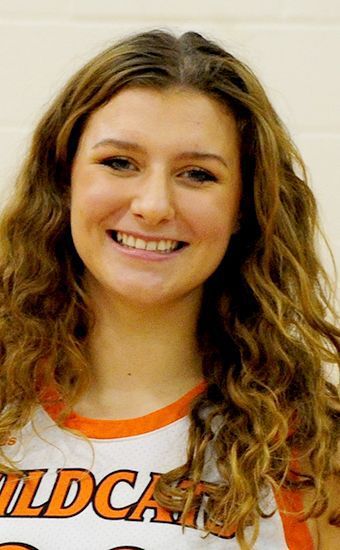 Learning how to handle that pressure will be key to the Lady Wildcats’ success in conference play. So far, throughout most of its first two section games, Greater Latrobe has shown it can do just that.

And while McKeesport Area’s press troubled the Lady Wildcats at times, Greater Latrobe managed 28 fast-break points to fend off a fast Lady Tigers squad, 58-53, at home on Monday.

Greater Latrobe seemed to have overcome McKeesport Area’s defensive tactics in the fourth quarter, taking a 14-point lead when freshman Elle Snyder splashed a baseline jumper for two of her team-high 22 points.

But with fewer than four minutes to play, the Lady Tigers came storming back and cut the deficit to four (54-40) after causing six Greater Latrobe turnovers.

However, Greater Latrobe’s players found their composure down the stretch, as senior Rachel Ridilla went 4-for-4 at the free throw line to ice a five-point victory.

“Rachel made those four free throws and those were big,” Burkardt said.

Greater Latrobe’s forwards once again controlled the rebounding battle, as they did in Friday’s 51-38 win against Franklin Regional. Anna Rafferty (12 points, 15 rebounds) and Emma Blair (12 points, 18 rebounds) each posted double-doubles for a second consecutive game.

Handling McKeesport Area’s full-court press was Burkardt’s goal heading into Monday’s game, but it was also to control the glass.

“We wanted to handle the pressure, which is what we were hoping to do, but I thought rebounding again — there were very few second shots,” he said. “We did a good job on the boards overall.”

Snyder got hot early on, hitting a 3-pointer off a Rafferty assist to pull within two (7-5), but McKeesport led 12-11 after the first quarter.

However, the Lady Wildcats used a 10-0 run to pull ahead to start the second quarter and never trailed again.

“We changed up some players. We brought three players off the bench, and they gave us a real spark,” Burkardt said. “Elle who had 22 points as a freshman — that was only her second varsity action. She played like a senior most of the night. I can’t say enough about how well she played.”

Lexi Weatherton’s trey off an inbound play put Greater Latrobe ahead 34-26 in the third.

A few plays later, the Lady Wildcats maneuvered past McKeesport Area’s press with smooth passing as Rafferty hit Snyder with a bounce pass for an easy layup to make it 36-27.

While Greater Latrobe had two dozen turnovers, they made McKeesport Area pay by capitalizing on the fast break.

“When you press, you’re gambling. … We did get easy baskets. We had 28 fast break points that was off of the press,” Burkardt said.

Each team scored 18 points in the fourth, as the Lady Wildcats secured a five-point win.

“Most of the teams in the section, their full-court press is what they want to do,” he said.

But after starting the season off with back-to-back wins, Burkardt and the Lady Wildcats are thrilled.

“I told the girls, I’d rather play a little sloppy and lose than play perfect and win,” Burkardt said. “I’m really happy where we are.”