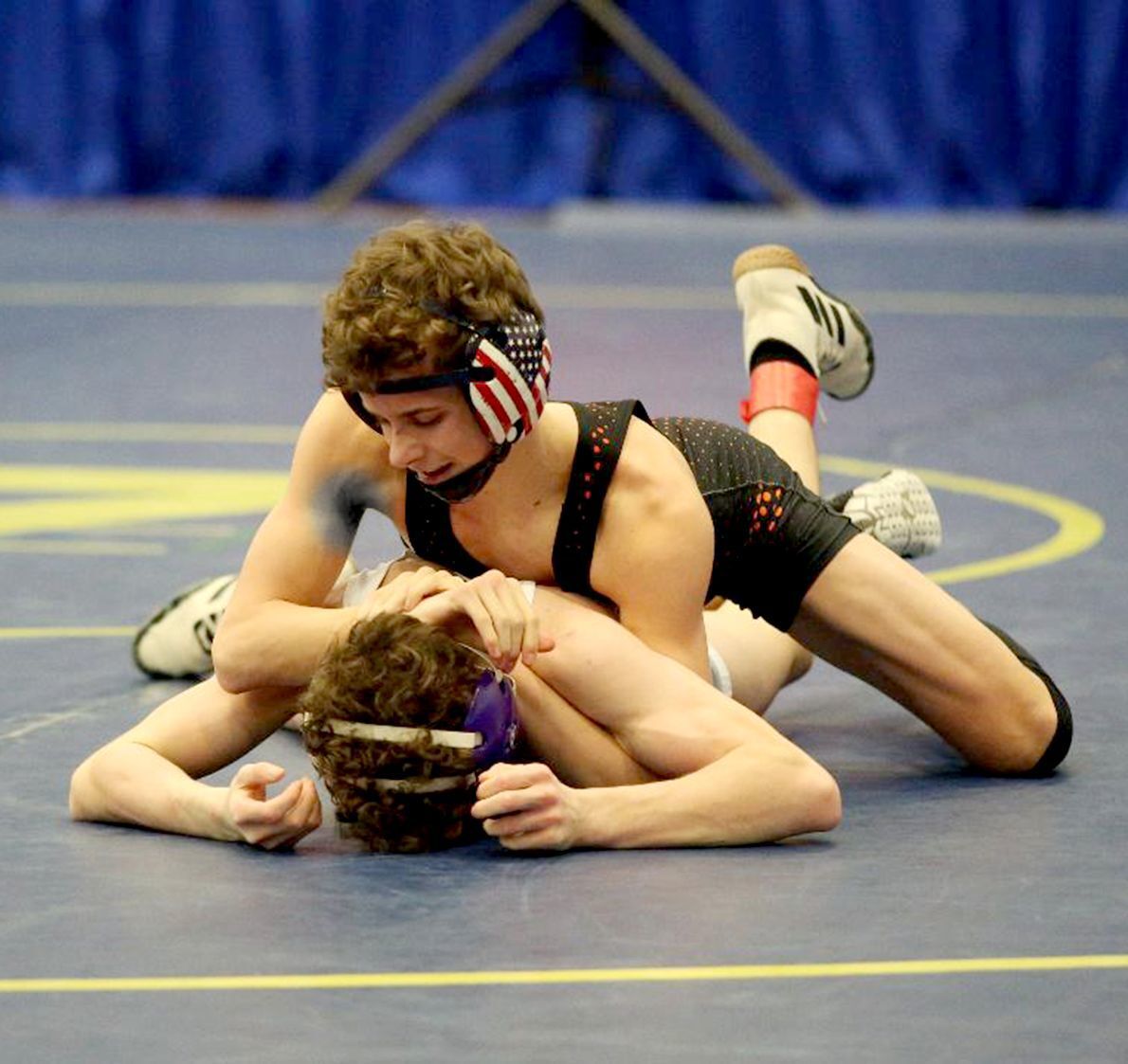 Greater Latrobe’s Jacob Braun qualified for the WPIAL Class 3A Championships during Saturday’s WPIAL Class 3A, Section 2 Championships at Hempfield Area High School. He defeated Baldwin’s Owen Klodowski, 6-2, in the semifinals, but suffered a 5-0 defeat against Jake Layton of Connellsville Area in the 106-pound match for the section title. 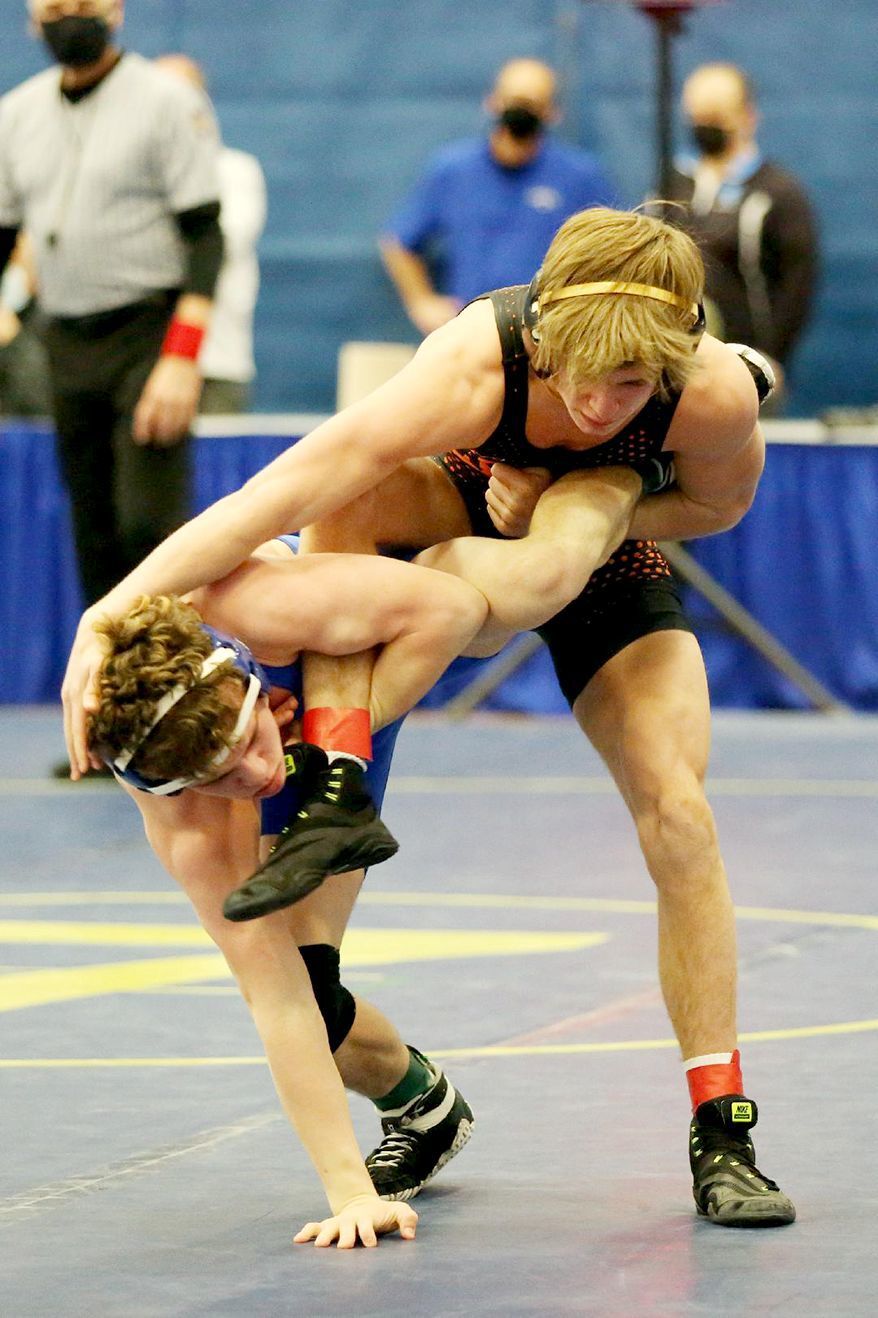 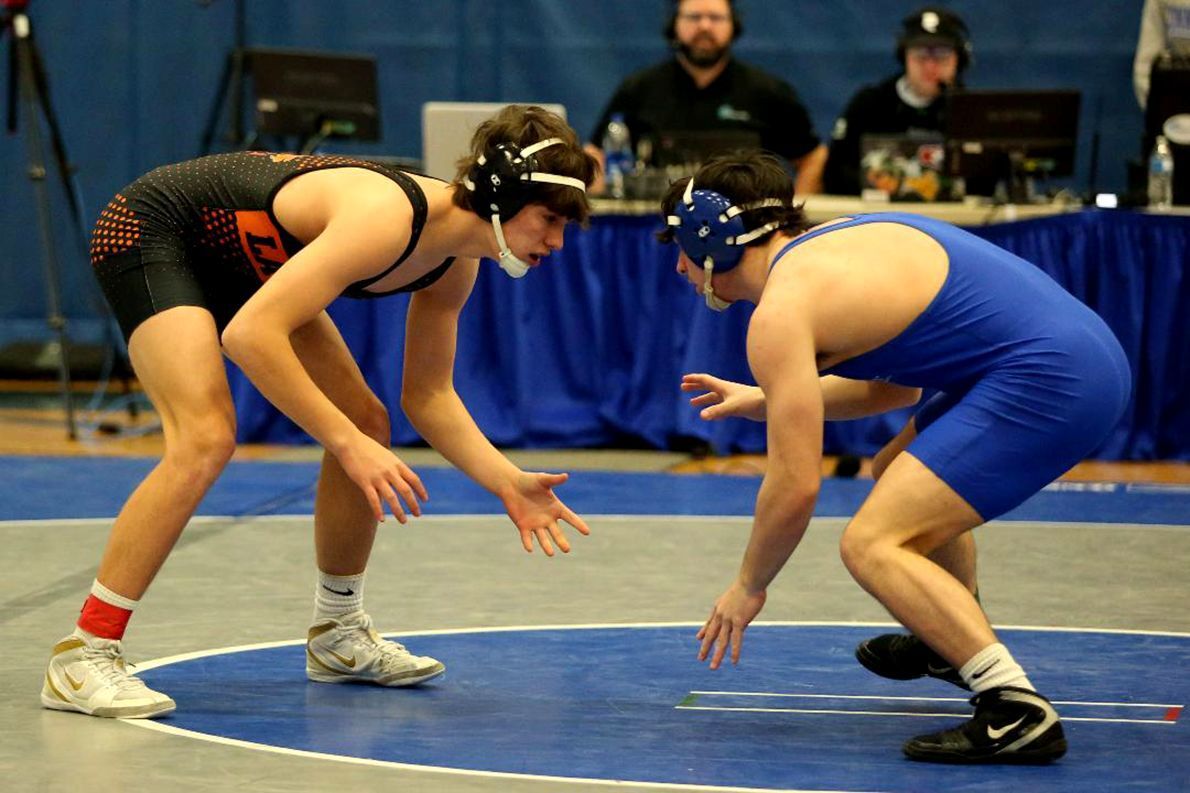 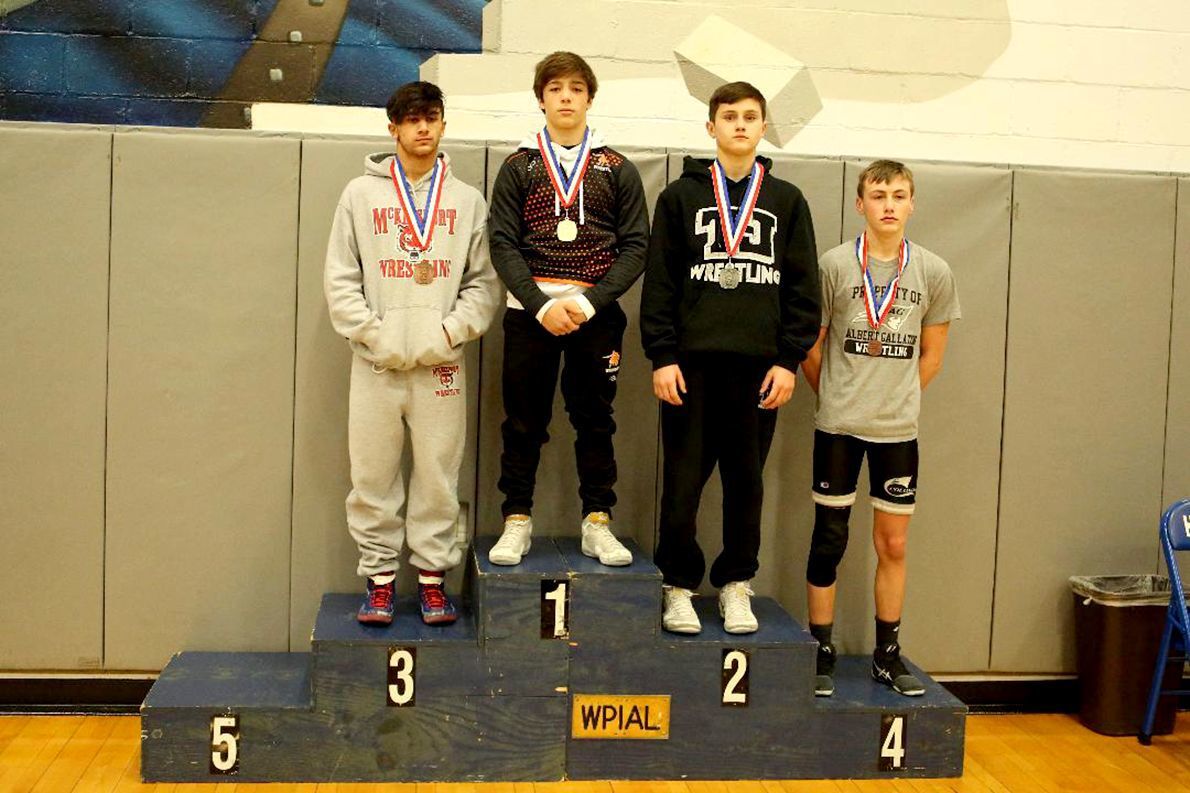 Greater Latrobe’s Jacob Braun qualified for the WPIAL Class 3A Championships during Saturday’s WPIAL Class 3A, Section 2 Championships at Hempfield Area High School. He defeated Baldwin’s Owen Klodowski, 6-2, in the semifinals, but suffered a 5-0 defeat against Jake Layton of Connellsville Area in the 106-pound match for the section title.

Mears also recognizes that the crop of four talented Wildcats headed to the WPIAL Class 3A Championships later this week are all underclassmen and they have a good chance to return to Hershey next season under normal qualifying circumstances.

But that doesn’t mean the remaining Wildcats can’t make it to Hershey this season.

“Everyone wrestling comes back next year,” Mears said. “In my heart, these four kids, and even a couple who lost (on Saturday), they’re all going to states next year. But don’t count out this year, and don’t sell yourself short just because you’re young, or just because you have a little less experience.

“There’s only eight guys left and three of them go. Don’t be so sure you can’t be one of those three.”

The next step to Hershey will take place on Saturday during the WPIAL Class 3A Championships at Canon-McMillan High School. The top three from there advance to the PIAA Class 3A Super Regional Tournament at Altoona High School on March 6.

Kilkeary, a sophomore, captured a PIAA Class 3A Individual State Championship last season as a freshman. He’s well on his way to defending his state title with two quick pinfalls on Saturday.

Kilkeary spent just 2:19 on the mat on Saturday, as he pinned Alex Simon of Albert Gallatin in 1:17 and followed it up with a fall against Thomas Jefferson’s Gabe Galioto in 1:02 to clinch the section championship.

“What I enjoy about Vinny, like I’ve said so many times, is that he wrestles every match the same,” Mears said. “Sometimes you get caught up watching your athlete, but you have to remember to keep coaching your athlete because you don’t want to go to the corner and assume you’re going to win. He’s so consistent and it’s just a pleasure to watch him wrestle.”

Braun, a freshman, has seen plenty of Kilkeary this season, as the two are frequent workout partners. The Wildcats have their team broken down into pods of four to protect against coronavirus, as a positive test or exposure would shut down a pod instead of the entire team.

Braun has learned much from Kilkeary, the defending state champion.

“He benefits greatly from having to wrestle Vinny Kilkeary every day in practice,” Mears said. “In a tournament, you’re just happy you get to wrestle someone else. He’s had to grow up fast just because of the situation.”

Braun is only 6-1 this season with five matches wrestled and two wins via forfeit. Braun defeated Baldwin’s Owen Klodowski, 6-2, in the semifinals, but suffered a 5-0 defeat against Jake Layton of Connellsville Area in the 106-pound match for the section title.

“I’m happy for Jacob,” Mears said. “Our staff talked three weeks ago and we felt if he could make it to 108, I honestly believed he was going to (the WPIAL Class 3A Championship) and he believed that, too.

“He’s performing really well for the limited amount of time he’s been able to go on the mat and wrestle.”

Roth faced a familiar opponent on his way to this weekend’s WPIAL Class 3A Championship.

Roth, a sophomore, squared off against Hempfield Area’s Briar Priest for the fourth time in the 132-pound section championship.

Roth edged out Gabe Ruggieri of Connellsville Area, 2-0, in the semifinals to set up the rematch with Priest. Priest got the better of Roth for the fourth time this season in the section championship match with a 3-1 decision.

Priest has defeated Roth four times by a total of six points. He edged out Roth, 6-5, during a January dual and again, 2-0, at the Westmoreland County Tournament. Priest defeated Roth, 2-0, at Thursday’s sub-section tournament before Saturday’s victory against the Greater Latrobe 132-pounder.

On Saturday, Roth led 1-0 entering the third period before Priest scored his three points in the deciding two minutes.

“I saw a different match this time,” Mears said of Saturday’s clash. “I just keep telling Nate that you only have to beat him one time. They’re probably going to wrestle a fifth time this week and maybe a sixth at Altoona. As a coach, you have to throw out a new game plan because they’re watching the same tape. You have to throw something at them that they’re not expecting.”

Boerio, a sophomore, also fell in the 189-pound match for the section title.

Boerio narrowly defeated Dennis Nichelson of Connellsville Area, 4-3, in the semifinals before he suffered a 4-3 setback against Logan Hoffman of Belle Vernon Area in the section championship match. It was Hoffman’s second win against Boerio this season, the other one a 5-2 victory at the Westmoreland County Tournament.

Hoffman led 4-1 early in the match on Saturday before a pair of Boerio escapes cut it to 4-2 through two periods and the eventual final margin. Boerio had a chance at a takedown in the final seconds, which would’ve provided the win.

“He had his leg up, so if he finishes that takedown, he wins,” Mears said. “Instead of wrestling not to lose, this time, he was wrestling to win. Corey is starting to find himself and realize that he’s pretty good. He’s starting to believe.”

Lynch suffered a pinfall defeat in the semifinals against Cole Weightman of Belle Vernon Area in 2:31 and the fell by major decision, 9-0, against Greensburg Salem’s Caleb Chismar.

“Tyler worked so hard this year,” Mears said. “To lose with one match away from going, I felt terrible for him.”

Henry, the Wildcats’ lone senior, fell by pinfall against Ethan Ansell of Connellsville Area in 4:23. He didn’t wrestle a second match because West Mifflin Area pulled out of the tournament following a COVID-19 issue, leaving Henry without an opponent.

“I think Payton is a kid who worked very hard this year,” Mears said. “He got a lot better and I wish we had one more year to coach him.”

Pletcher, a junior, suffered a pinfall defeat in the semifinals against Michael Zacur of Thomas Jefferson in 3:18. But he rebounded with a 9-1 major decision against Nolan Daerr of Hempfield Area to finish third in the section.

“Jack just made one mistake and unfortunately, the style of tournaments they’re running with (COVID-19) this year, there’s no room for a mistake,” Mears said.

Mears was proud of the way Pletcher rebounded in the third-place match with his major decision victory.

“I thought he showed an extreme amount of character and class to come back and win his last match of the season,” Mears said. “He’s one of the leaders on our team and he set the example of what you’re supposed to do. I thought that was important to our whole program because he could’ve easily tanked it, but he didn’t, and that’s why he’s the leader.”