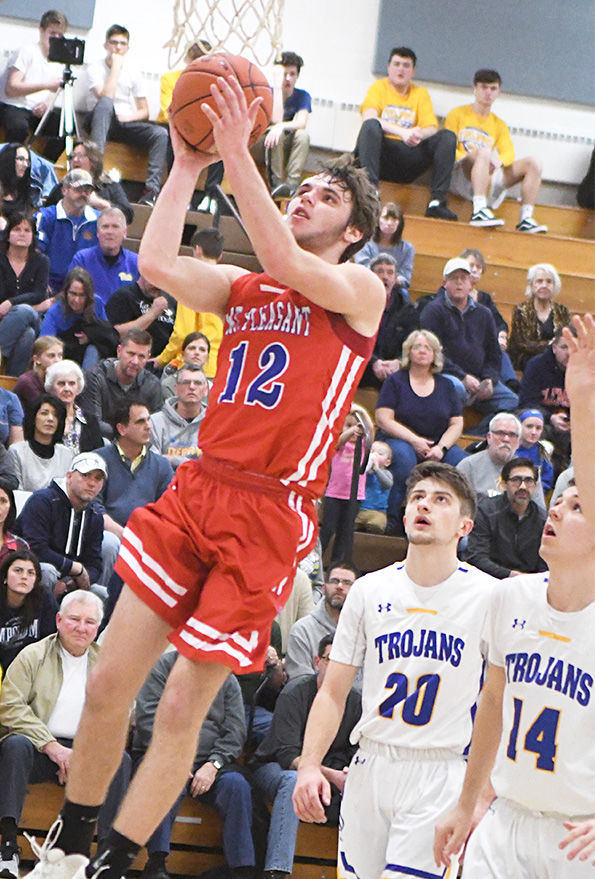 Mount Pleasant’s Jacob Johnson goes in for a layup (left) against Derry Area during Friday night’s WPIAL Section 1-AAAA game. Johnson, a senior guard, went over 1,000 points for his career in the contest. He finished with 43 points in the Vikings’ 72-68 overtime win and now has 1,029. In photo at right, Aidan Bushey of DA pulls up for a jumper over Mount Pleasant’s Jonas King. Bushey had 29 points. 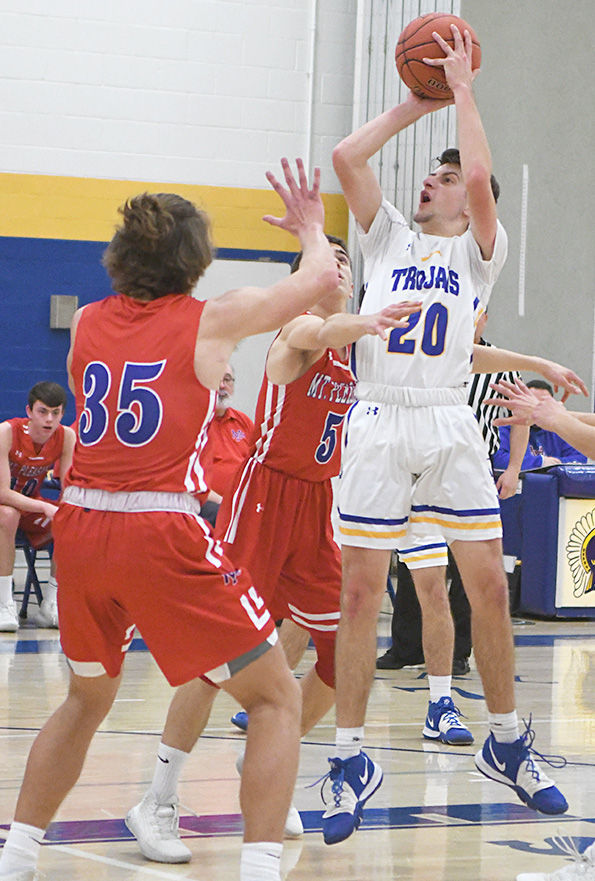 In photo at right, Aidan Bushey of Derry Area pulls up for a jumper over Mount Pleasant's Jonas King. Bushey had 29 points, but the Trojans suffered a 72-68 overtime setback. 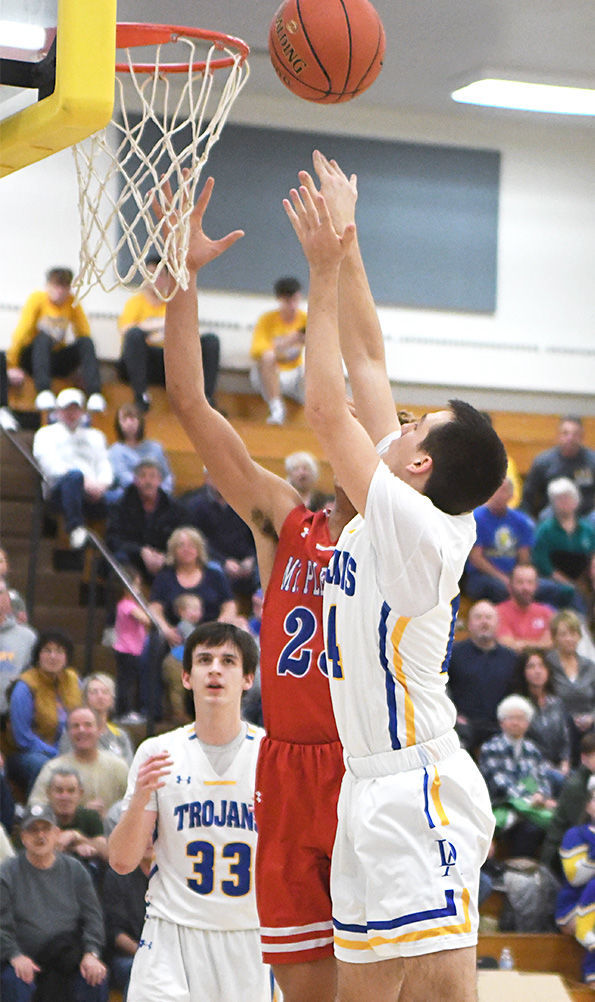 Derry Area’s Tanner Nicely puts up a shot over a Mount Pleasant defender during Friday night’s WPIAL Section 1-AAAA game. Nicely had nine points for the Trojans in their 72-68 overtime defeat to the Vikings.

Mount Pleasant’s Jacob Johnson goes in for a layup (left) against Derry Area during Friday night’s WPIAL Section 1-AAAA game. Johnson, a senior guard, went over 1,000 points for his career in the contest. He finished with 43 points in the Vikings’ 72-68 overtime win and now has 1,029. In photo at right, Aidan Bushey of DA pulls up for a jumper over Mount Pleasant’s Jonas King. Bushey had 29 points.

In photo at right, Aidan Bushey of Derry Area pulls up for a jumper over Mount Pleasant's Jonas King. Bushey had 29 points, but the Trojans suffered a 72-68 overtime setback.

Derry Area’s Tanner Nicely puts up a shot over a Mount Pleasant defender during Friday night’s WPIAL Section 1-AAAA game. Nicely had nine points for the Trojans in their 72-68 overtime defeat to the Vikings.

With a prior meeting decided by two points just three weeks ago and identical WPIAL Class 4A Section 1 records, most in attendance for Friday night’s game between Derry Area and Mount Pleasant were anticipating a tight game.

The matchup met expectations in that regard, extending into overtime before the visiting Vikings managed to pull out a 72-68 win and take over sole possession of third place in the section standings.

Derry Area (3-4, 6-10) had an uphill battle to reach the overtime period after falling behind over the first two quarters.

The Trojans trailed for most of the first half, but Mount Pleasant’s lead really grew in the second quarter as the Vikings (4-3, 10-7) stretched a 15-10 lead into a 38-27 margin. Derry Area rallied with a strong third quarter and held the lead in both the fourth quarter and overtime, but couldn’t hold on for the win.

“I wish we would have gotten to the line just a few more times, which I thought we could have and should have. But you tip your hat to them. They did what they had to do to score a few more points than us.”

Mount Pleasant senior Jake Johnson was a big reason the Vikings managed to outscore the Trojans. He entered the contest needing 14 points to hit the 1,000-point milestone and accomplished the feat on a second-quarter jumper.

“It’s been something I’m working at since I was in second or third grade,” Johnson said of reaching 1,000 points. “It’s something I’ve always wanted. Putting all the work in over the years, the work that no one sees, just makes it a lot more special.”

Johnson kept right on rolling after hitting the mark, finishing with a game-high 43.

“We were trying to contain J.J. (Johnson) as best we can,” Esposito said. “He’s a heck of a player and I respect him very much. We just didn’t force their other players to beat us, and that was our goal.”

DA started the second half with a more aggressive defensive strategy to good success. The Trojans opened the third quarter with an 8-3 run and collected four steals within the first four minutes of the second half.

“We were down 11 at halftime and we made an adjustment,” Esposito said. “I told the guys in the locker room, ‘Let’s get it to six within three minutes,’ and they did. (Mount Pleasant) called a timeout and it was a six-point game.”

The comeback effort was also aided by hot shooting as the Trojans drained four three-pointers in the third quarter.

Derry Area needed to find success from beyond the arc due in part to strong defensive play from MP’s Jonas King in the paint. King blocked 11 shots in the game and pulled in a game-high 13 rebounds to go with 10 points.

“Jonas has been playing phenomenal defense the last couple games,” Vikings’ head coach Allan Bilinsky said. “I don’t know who the leader in the WPIAL in blocks is, but he’s got to be close.

Aidan Bushey knocked down treys on his team’s first two possessions of the fourth to give DA its first lead, 46-45, and extend it to 49-45.

But the Trojans couldn’t contain Johnson in the end. Johnson kept slashing through defenders to get to the rim, the foul line, or both, and kept Mount Pleasant within striking distance as he posted 14 of the Vikings’ 17 fourth-quarter points.

“We got down, we showed some character and some maturity,” Bilinsky said. “We came back, we played and we got it. We got it.”

Derry Area built a 65-62 edge at the midway point of overtime, but came up empty on too many possessions down the stretch to pull out the victory.

Luke Brandner hit a pair of foul shots to give Mount Pleasant its first overtime points and, after the Trojans were called for a travel on their next possession, Lucas Toohey’s layup put the Vikings ahead, 66-65, with 1:01 to play. Derry Area couldn’t find the long-range accuracy that had helped erase the halftime deficit, going one-and-done with misses from three-point range on two straight possessions and being forced to foul.

“They were hitting threes and we were making twos. Eventually, you’re going to make more twos than threes,” Bilinsky said.

“Aidan Bushey played a (heck) of a game. I think he hit three shots from the volleyball line with a hand in his face. I don’t care who you are, if he’s making those, that’s it. They came out and they did what they needed to do.”

Mount Pleasant closed things out at the line, going six of six in the final minute — four of those foul shots coming from Johnson — to protect the lead despite Ryan Bushey’s late three-pointer.

“I expected a dog-fight, but we really gave it up there in the third quarter for sure. We let them back in,” Johnson said. “It is what it is, but we learned how to finish the game. We didn’t stop fighting.”

Aidan Bushey led Derry Area with 29 points, 18 of them coming from beyond the arc. He also finished with six steals and five rebounds Ryan Bushey added 13, five of which came during overtime, and dished out six assists to go along with five rebounds.

Derry Area is scheduled to travel to take on Greensburg Central Catholic on Sunday at 5 p.m. in the Westmoreland Sports Network Shootout at Seton Hill University before traveling to Yough for a conference tilt on Tuesday.