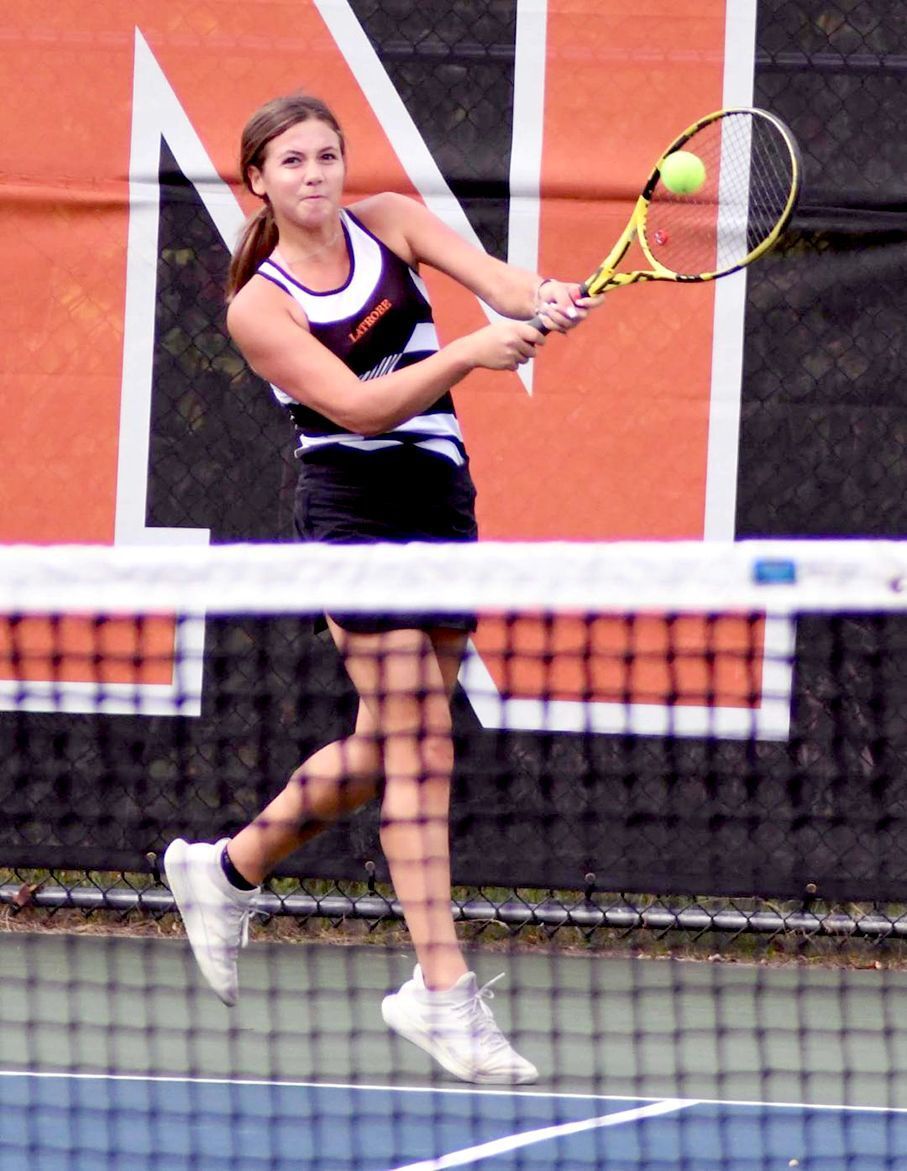 Greater Latrobe’s Addison Kemerer cruised to a 6-2, 6-2 victory against Shady Side Academy’s Nichole Poltinnikov during a WPIAL Class 3A quarterfinal-round matchup Thursday at Greater Latrobe. The Lady Wildcats advanced to Monday’s WPIAL Class 3A semifinal with a 4-1 victory. 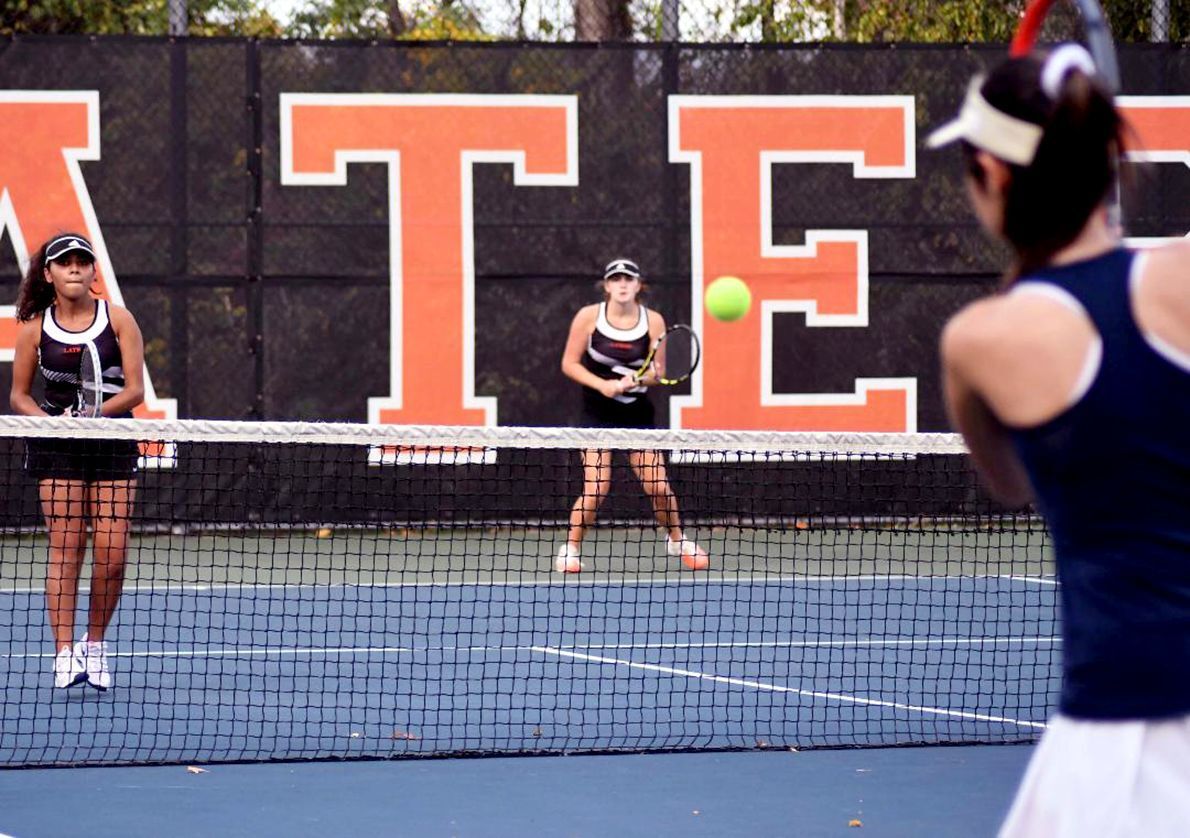 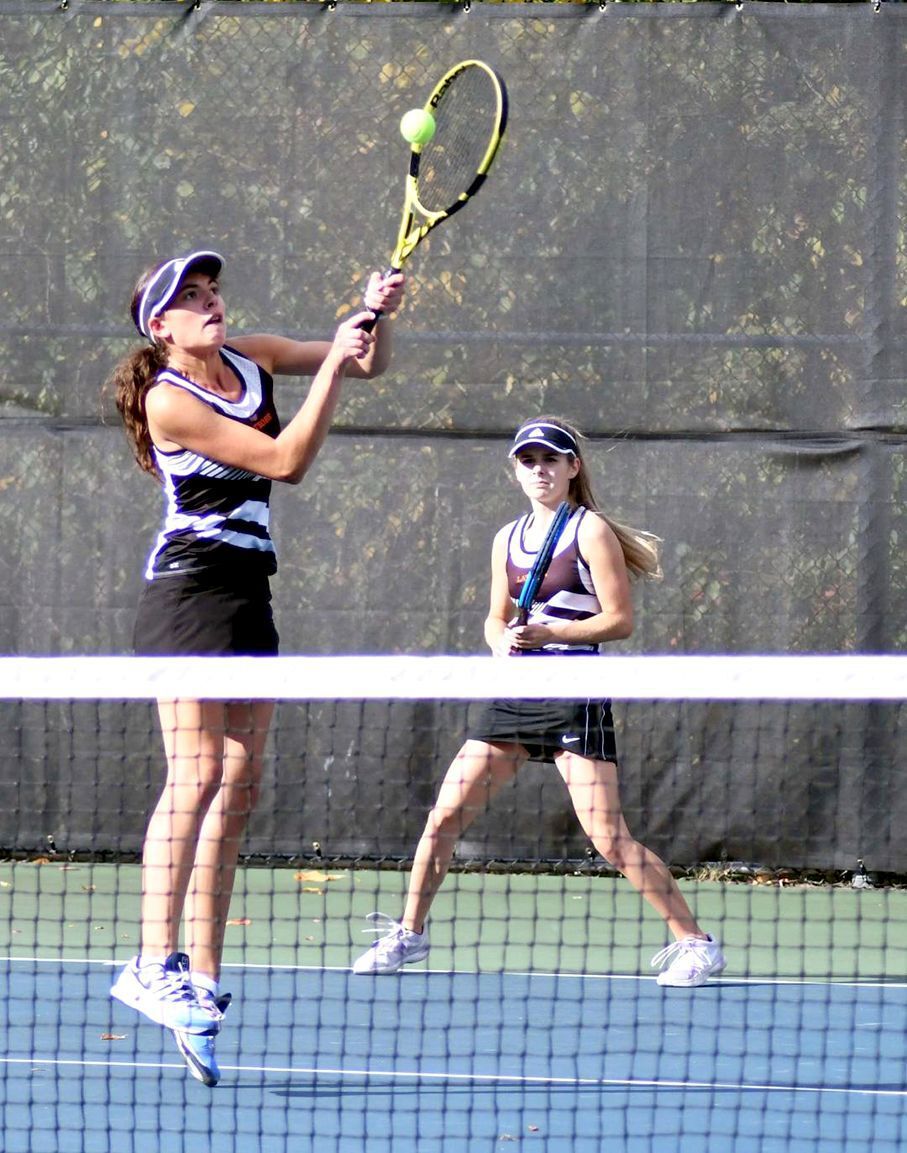 Greater Latrobe’s Avery Massaro jumps to connect with a return, while teammate Emily Pierce watches the play during Thursday’s WPIAL Class 3A quarterfinal-round match against Shady Side Academy. Massaro and Pierce picked up a 4-6, 7-6 (5), 6-4 win, helping the Lady Wildcats score a 4-1 victory and advance to the WPIAL Class 3A semifinals. 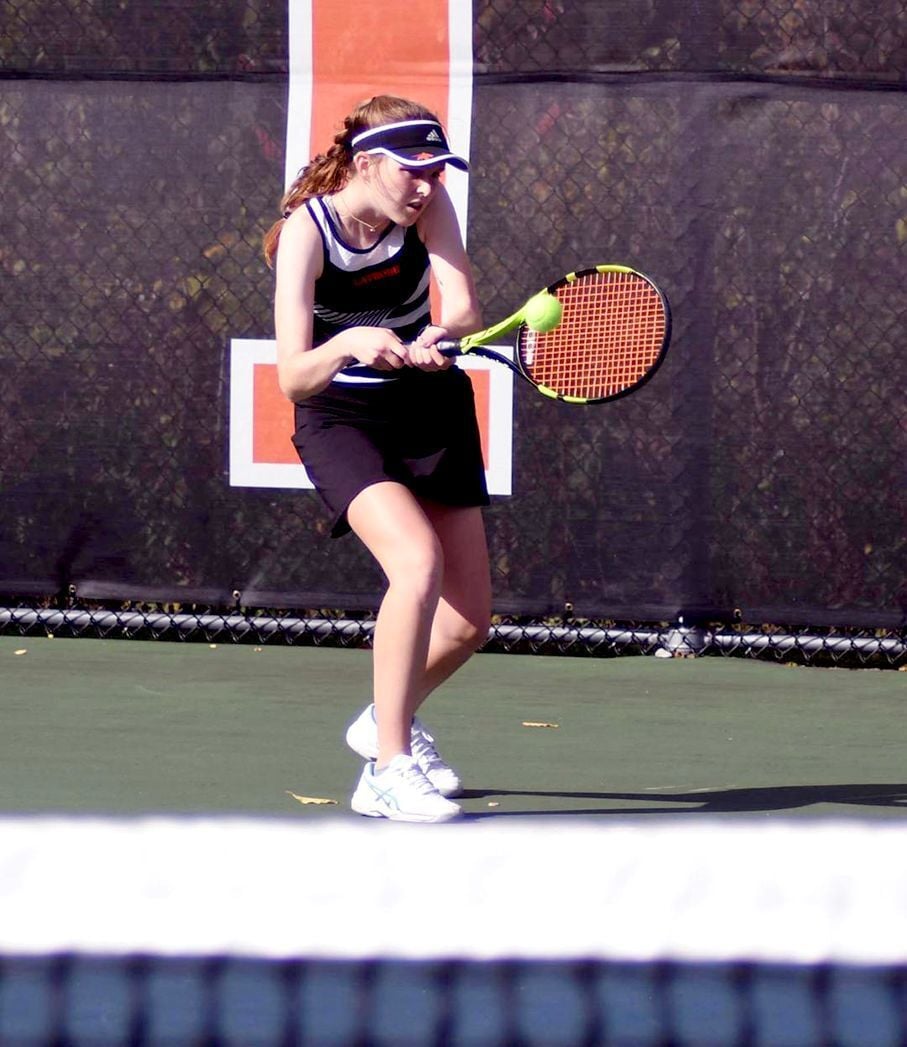 Greater Latrobe’s Addison Kemerer cruised to a 6-2, 6-2 victory against Shady Side Academy’s Nichole Poltinnikov during a WPIAL Class 3A quarterfinal-round matchup Thursday at Greater Latrobe. The Lady Wildcats advanced to Monday’s WPIAL Class 3A semifinal with a 4-1 victory.

Greater Latrobe’s Avery Massaro jumps to connect with a return, while teammate Emily Pierce watches the play during Thursday’s WPIAL Class 3A quarterfinal-round match against Shady Side Academy. Massaro and Pierce picked up a 4-6, 7-6 (5), 6-4 win, helping the Lady Wildcats score a 4-1 victory and advance to the WPIAL Class 3A semifinals.

As Greater Latrobe head coach Chad Kissell anticipated, his top two singles players cruised to wins on Thursday in the WPIAL Class 3A quarterfinals against Shady Side Academy.

However, Kissell’s No. 3 singles player and both doubles teams dropped their opening sets, putting the No. 4-seeded Lady Wildcats in jeopardy of being upset. As the matches progressed, however, the host Lady Wildcats showed their resolve, and ultimately rebounded to claim a 4-1 win.

“We haven’t played too many tight matches this year, so when you’re put in one and it’s playoffs and there’s a lot more at risk, sometimes you can crack,” Kissell detailed. “But I think they handled the pressure well, because even if they’re not playing the best, they just had to find a way to win, and that’s exactly what they did.”

The No. 2 singles match had a similar result, as senior Addison Kemerer bested Shady Side Academy sophomore Nichole Poltinnikov 6-2, 6-2.

“We won our first two singles pretty handily, which I thought would be the case because they have some young players,” Kissell stated.

Another young player for Shady Side Academy, freshman Rachel Nath, took the opening set 6-4 against Greater Latrobe junior Carolina Walters in the third singles battle, however.

The undefeated Lady Wildcats (12-0) needed to rally in at least one of those matches, as Walters and both doubles tandems claimed the middle sets.

In the decisive third sets, Walters secured the victory with a 6-2 margin, while Massaro and Pierce prevailed 6-4. The No. 1 doubles team, Petrosky and Jain, were ousted in extra points, falling 7-6 (4) to account for the final.

“I think we got off to a slow start for our doubles teams. I think they came out and played very tentative,” Kissell explained. “Luckily, all of my girls calmed down a little bit. I think maybe we played a little bit nervous at the beginning.”

The conditions also played a factor, as unseasonably warm temperatures took a toll and the three-set matches spanned approximately two-and-a-half hours. Walters, in particular, benefited from her advantage in endurance as her match progressed.

“You kind of have to play a little bit smarter with your shots,” Kissell detailed. “You can’t be going too aggressive for winners because the wind will push it in and out. I thought they handled it well.”

Reaching that round is a significant accomplishment in itself, as the Lady Wildcats were bounced in the quarterfinals last year in heartbreaking fashion, losing 3-2 to North Allegheny after having match point on multiple occasions. In 2018, it was Shady Side Academy that bested Greater Latrobe in the quarterfinals.

“For them to come back this year and get over that hump is awesome for them,” Kissell said.

The last time Greater Latrobe reached the semifinals was in 2005, when the Lady Wildcats claimed the WPIAL crown and advanced to the quarterfinals of the state tournament.

And while Lady Indians will be on their home court and provide a massive challenge next week, Kissell believes his team has a chance to prevail.

“I know they have a really good No. 1 and No. 2 and the rest of their team is solid.,” he said of Peters Township. “(But) I think we match up well against them. We’re also kind of strong at the top, and I think if we can pull out a couple of these singles wins, we’d have a great shot at winning the match.”

The other semifinals match will pit Upper St. Clair against Pine-Richland. The No. 2 Panthers defeated Fox Chapel Area 4-1 on Thursday, while the Lady Rams outlasted Mount Lebanon 3-2.

The WPIAL Class 3A Team Championship will be held on Wednesday.