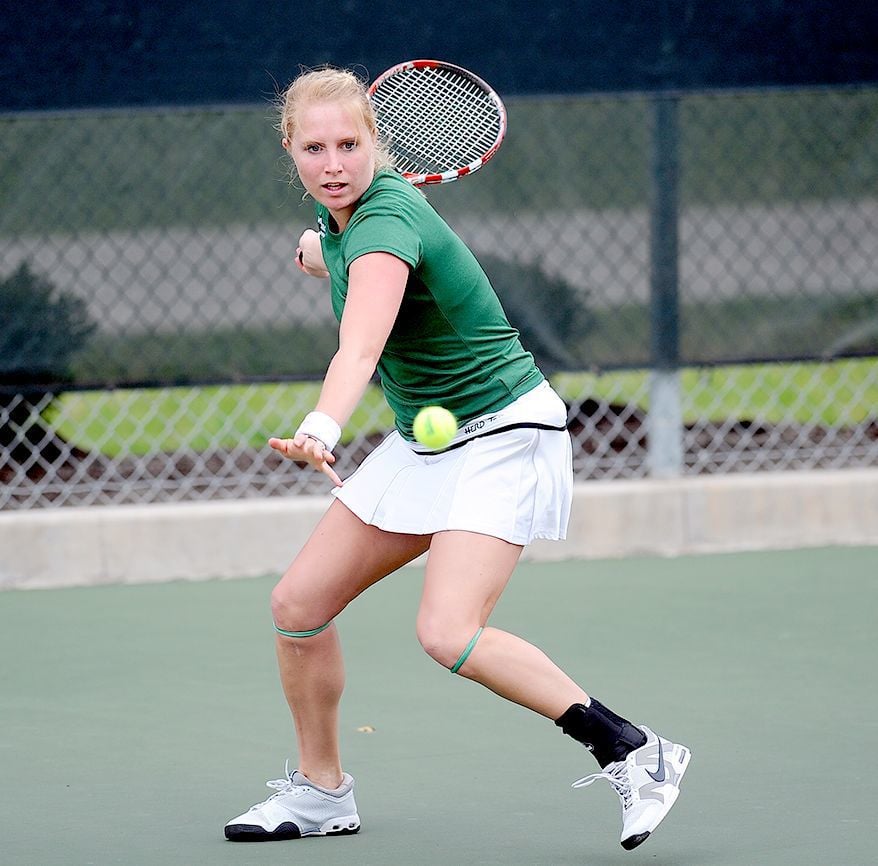 Former Greater Latrobe standout Michaela Kissell-Eddins was selected as part of the latest class of the WPIAL Hall of Fame. Greater Latrobe cross-country and track and field standout Natalie Bower Toman and Derry Area wrestling star Jimmy Gulibon are also part of the class. After a stop at the University of Miami, Kissell-Eddins went 110-41 during her college career at Marshall University. 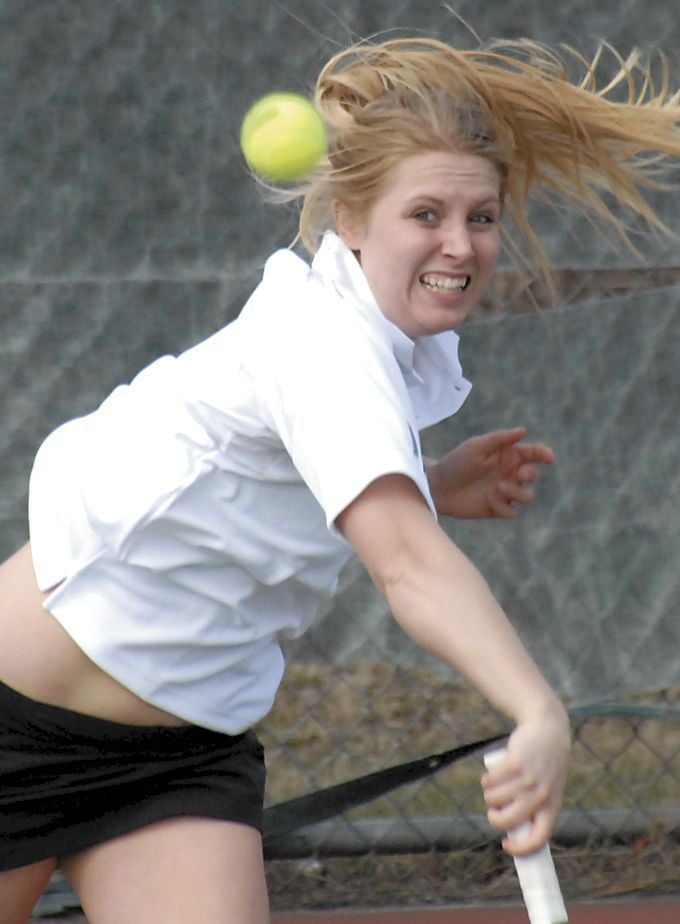 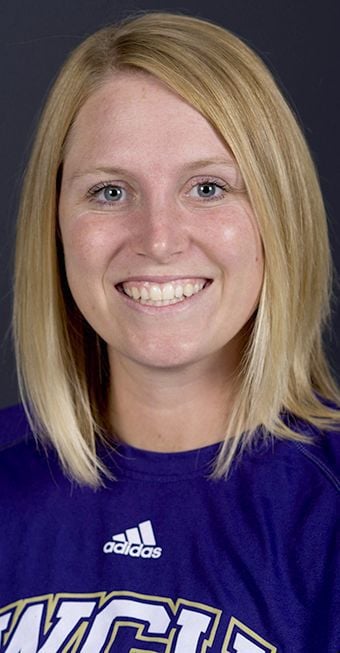 Former Greater Latrobe standout Michaela Kissell-Eddins was selected as part of the latest class of the WPIAL Hall of Fame. Greater Latrobe cross-country and track and field standout Natalie Bower Toman and Derry Area wrestling star Jimmy Gulibon are also part of the class. After a stop at the University of Miami, Kissell-Eddins went 110-41 during her college career at Marshall University.

When it comes to high school tennis, it’s hard to find anyone who had a more impressive, and unique, career than Greater Latrobe’s Michaela Kissell.

As a result of her incredible accomplishments, she was selected as part of the latest class of the WPIAL Hall of Fame. Because of the current coronavirus (COVID-19) pandemic, she and her fellow inductees will be honored as the Class of 2021, and their ceremony will be held next spring. Greater Latrobe cross-country and track and field standout Natalie Bower Toman and Derry Area wrestling star Jimmy Gulibon are also part of the class.

Michaela Kissell is now known as Kissell-Eddins. She learned that she was under consideration for the WPIAL honor several months ago, and was officially notified of her inclusion in April.

“I was really proud, not only for myself and my family, but mainly for my school,” she said. “I thought how cool it was to be able to represent them one more time. I was very grateful for what Greater Latrobe did for me when I was in high school.”

What she did for Greater Latrobe, in return, was significant.

The 2007 graduate dominated her first three years on the court, never losing a match. As a freshman in 2003, Kissell-Eddins produced an incredible debut season, claiming the section, WPIAL, and PIAA singles championships in Class AAA.

“I really stepped into my own at the right time,” she noted. “Not that I surprised myself, because I always felt that I had a really good chance of winning anytime I stepped on the court, but I think that year, the most impressive thing was holding my composure while being so young.”

She repeated that success in both her sophomore and junior campaigns, claiming three district and state crowns, and remaining unblemished. Her ability to not only maintain her level of play, but also handle added expectations as a sophomore and junior represented key factors in Kissell-Eddins’ achievements.

It seemed as though nothing could stop Kissell-Eddins for winning her fourth singles titles, but a severe injury posed an unexpected hurdle. Competing as an amateur in a pro event in Texas, Kissell-Eddins tore her right ACL, an injury that required nine months of recovery, eliminating any chance for her to play in the fall of her senior year.

“That was probably the worst news at the time that I had ever gotten. I was the type of kid who didn’t like to take two days off in a row, let alone months,” she revealed.

While the girls season was out of the equation, Kissell-Eddins learned of an unconventional alternative. Another WPIAL girls player, Quaker Valley’s Annie Houghton, encountered a similar situation in the previous season, and elected to play for the boys team in the spring after she recovered from injury.

After a discussion with then-Greater Latrobe tennis coach, John Mains, Kissell-Eddins decided to attempt the same route for her senior year.

“As it turned out, I was healthy enough to play, and it was great practice for going into college,” she said.

Kissell-Eddins did just fine against male competition, as she went undefeated in the regular season, and reached the WPIAL Class AAA quarterfinals before finally suffering a loss.

Kissell-Eddins wasn’t just limited to individual success during her time with the Wildcats, however, as Greater Latrobe girls won the section title in each of her three seasons, and she was also the headliner on the 2005 WPIAL Class AAA Championship team.

“I loved the bus rides with my team. I love driving to the tournaments with coach,” she said of her favorite memories from Greater Latrobe. “When you play the final point in the state final and you realize you’re the state champion and the last one standing, that moment is pretty awesome, as well.”

While her spot in Greater Latrobe athletics history was already solidified well before the time Kissell-Eddins graduated, she never had a long-term outlook to her success while it was happening. Instead, her laser focus on the moment proved to be an asset.

“Every chance I got to play, I really just was focused on that one match. By doing so, I was able to accomplish a lot of things in my high-school career,” she stated. “I wasn’t thinking into the future at that point.

“Being able to look back, I’m really proud at what I was able to do.”

From there, Kissell-Eddins went to the University of Miami, where she played for the Hurricanes’ tennis team for two years. During her time in the Sunshine State, Kissell-Eddins learned the value of weight training and nutrition.

Although she played a significant role with the team, Kissell-Eddins sought a new destination after her sophomore year, and she transferred to Marshall University in Huntingdon, West Virginia.

“I really wanted to go somewhere where it was more about the team and more about just giving your all, as opposed to be result oriented,” she explained.

The results for Kissell-Eddins at Marshall were certainly not an afterthought, however, as she posted a record of 110-41 between singles and doubles. She also learned aspects that would prove invaluable in her future career as a coach, as she gained knowledge about recruiting and scheduling, among other things.

“It was there that I really fell in love with coaching, and just college tennis in general,” she said.

She also fell in love in a much different way, as she met her future husband, Jacob Eddins, while he was working at a tennis club in Huntingdon.

After she concluded her decorated career that included two First-Team All-Conference USA honors, Kissell-Eddins joined the coaching ranks as an assistant at Cornell University in 2011-12.

The following year, she was part of the staff at the University of Pittsburgh, and ascended to the role of interim head coach for the spring portion of the 2012-13 school year. in the process, she helped guide Pitt to the quarterfinals of the Big East Tournament for the first time in program history.

In 2013, she became the head coach at Western Carolina University, a position she held for five years. Her husband also served as her assistant during that time with the Catamounts.

After the 2017-18 campaign, Kissell-Eddins’ husband took a position as an assistant at Auburn University, and with her family growing, she stepped away from the coaching ranks for a year.

Jacob Eddins took another assistant coaching role this past school year, with West Virginia University. After the family relocated to Morgantown, Kissell-Eddins took a position working with junior players at the Summit Tennis Academy, and she’s expecting her fourth child in June.

Kissell-Eddins still has significant ties to Greater Latrobe, as her parents and sister reside in the area, while her younger brother, Chad, serves as the current Wildcats’ tennis coach.

“I just thought how cool Latrobe has two people in there,” Kissell-Eddins stated. “She was really quick to reach out to me and say congratulations.”