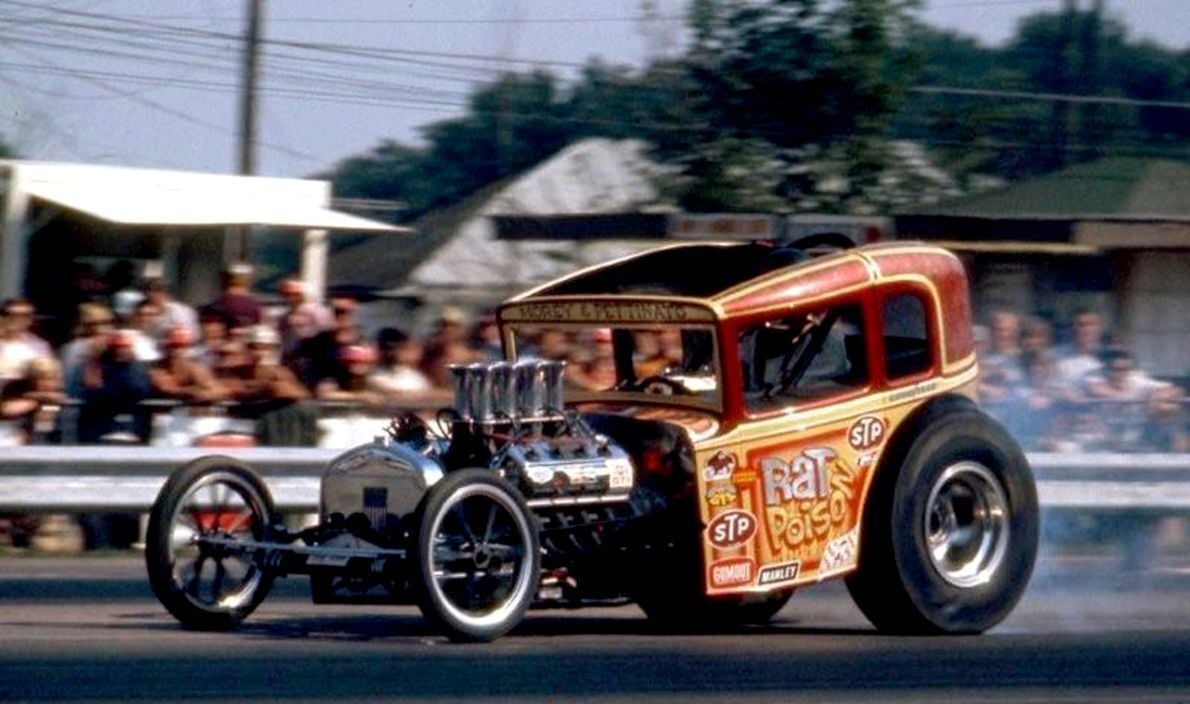 Dan Pettinato’s family history of racing at Keystone Raceway Park dates back to the early 1970s when he father drove the Morey and Pettinato fuel altered based in Maryland. Pettinato will drive Rat Poison on Saturday and the above car is the one that ran at the track in the 1970s. 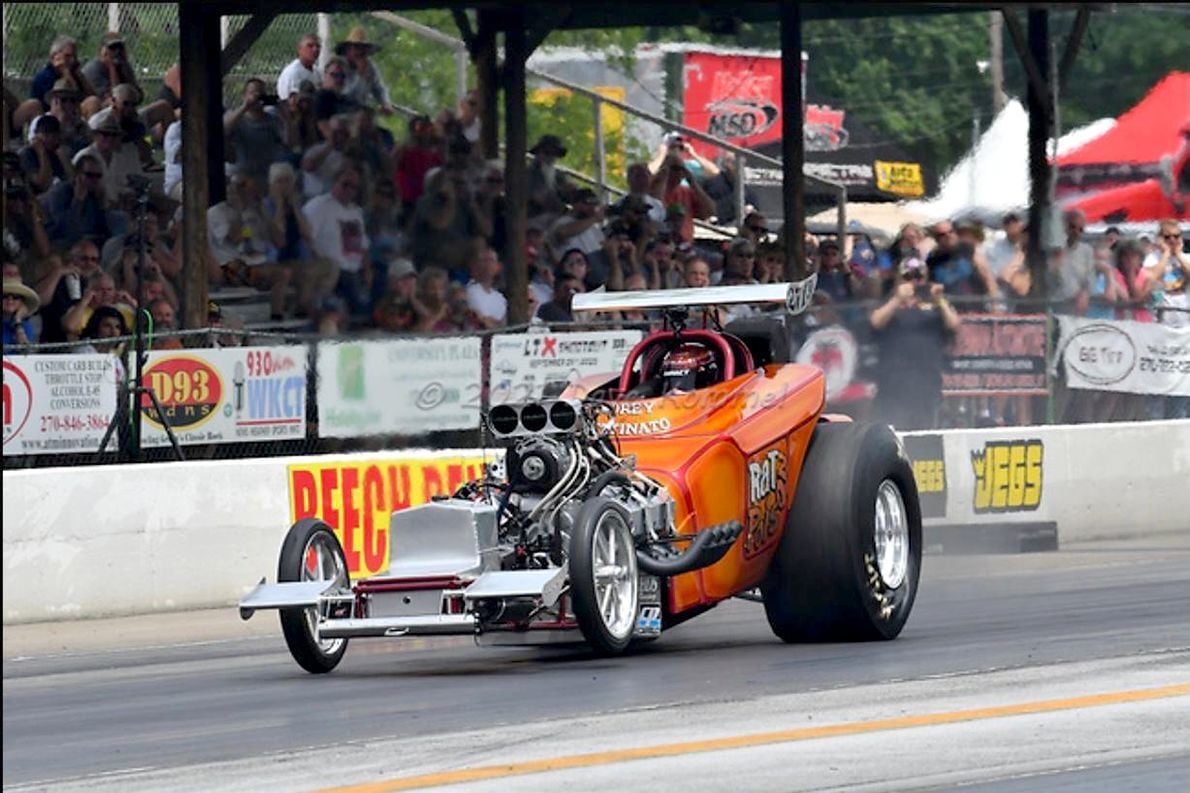 Dan Pettinato’s Rat Poison will be making an appearance at Keystone Raceway Park in New Alexandria on Saturday. This vehicle is a variation of the one driven by his father at the same track in the 1970s.

Dan Pettinato’s family history of racing at Keystone Raceway Park dates back to the early 1970s when he father drove the Morey and Pettinato fuel altered based in Maryland. Pettinato will drive Rat Poison on Saturday and the above car is the one that ran at the track in the 1970s.

Dan Pettinato’s Rat Poison will be making an appearance at Keystone Raceway Park in New Alexandria on Saturday. This vehicle is a variation of the one driven by his father at the same track in the 1970s.

As the racing season winds down, several local tracks are hoping for good weather this weekend.

Friday is a test and tune, and Saturday’s program kicks off at 10 a.m. with time trials. The show cars: the Southern Slingshots, AA Gassers, Nostalgia Funny Cars, and AA Fuel Altereds run at 5 and 8 p.m.

The program concludes on Sunday with time trials at 10 a.m. and all show cars at 1:30 p.m.

One of the featured Nitro Fuel Altereds will be Dan Pettinato’s Rat Poison.

Pettinato’s family history of racing at PID and Keystone goes back to the early ‘70s when his father drove the Morey and Pettinato fuel altered based in Maryland.

Frank Pettinato raced on the Fuel Altereds Unlimited circuit up and down the east coast until they raced at the first Fuel Altered Nationals in Tucson.

The Pettinato’s love the west so much, they moved to California. Dan Pettinato has raced everything from Front Engine Fuel Dragsters to Funny Cars, but he is passionate about Nitro Fuel Altereds.

The Rat Poison altered will be Scott Gaulter’s Nitro Madness, the Bad Habit, and the Time Bandit.

The Bulletin will be LIVE on Facebook Saturday afternoon at KRP.

For more information on the event, check out Keystone Raceway Park on Facebook.

LERNERVILLE — On Saturday, the stars and cars of the World of Outlaws NOS Energy Drink Sprint Car Series make their triumphant return to the ‘The Action Track’ for the $10,000 to-win ‘Commonwealth Clash’ that has become a staple on the Lernerville schedule since 2010.

Over the past decade, the “Big Three” in the NOS Energy Drink Sprint Car Series is undoubtedly Donny Schatz, Brad Sweet, and David Gravel. Those three are the rulers of Lernerville’s Commonwealth Clash, as the only drivers with multiple scores since the date was moved to the fall in 2010.

Schatz, who owns nine wins at Lernerville, is trying to make the Sarver oval his eighth track with 10-plus World of Outlaws wins. He and the Tony Stewart/Curb-Agajanian Racing No. 15 topped the Commonwealth Clash in 2010 and 2016.

Sweet is in rarified air when it comes to the Commonwealth Clash, becoming only the second driver to win back-to-back titles along with Steve Kinser. He and the Kasey Kahne Racing No. 49 owned the fall event in 2018 and 2019.

Gravel is the defending Commonwealth Clash champion, winning the 2020 race with the Jason Johnson Racing No. 41 crew. He also topped the 2017 race with CJB Motorsports and now eyes a score in the Big Game Motorsports No. 2.

In the 4-Cylinders, Bob Pease took the win with Tiffani McElhose in second, followed by Paul Koffler III, Jeremy Grubbs, and Jeff Vasos.

The E-Mod feature was dominated by Mike Potosky, followed by Bruce Dreistadt, with Nolan Dolton finishing third, Greg Hauger, and Royce Stanley rounding out the top-five.

In the Pure Stocks, Anthony Monteparte collected his 13th win of the regular season. Steven Hazlett finished second with Dennis Collins in third, Jason Morrison was fourth, followed by Mike Peters in fifth.

The focus is now on the bonus money for the Hot Summer Nights Series (Crate Late Models, Pro Stock, Pure Stock, 4-Cylinders, and E-Mods), which will be awarded on Saturday.

DOG HOLLOW SPEEDWAY — Linden, Virginia’s Kyle Hardy was victorious in the ULMS Late Model portion of the Inaugural Tom Smith Memorial at Dog Hollow Speedway. Shawn Shoemaker took a narrow win in the Limited Late Model feature while Michael Duritsky pulled off his third straight in the RUSH Late Models. Tim Laughard of Nanty Glo, and Brad Benton, of Duncansville shared the RUSH Stock Car and Pure Stocks. McIntyre’s Dylan Young came away with his second checker of the season in the 4-Cylinders. Drivers from six states competed in the final race of the 2021 season.

Welcome, Maryland driver Chuck Bowie led the first three laps of the 20-lap RUSH Late Model feature. He gave way to Michael Duritsky, who led the next seven laps in a race that was plagued with yellows. Joe Martin was next in line to take the lead on lap 11. Caution flew with two to go. On the restart, Martin led and took the white flag but going into turn one, Duritsky went low, and Martin pushed up in turn two. Duritsky scored his third straight win and fourth overall on the season. Martin held on for second over Joe Moyer, Chuck Bowie, Levi Crowl.

Dan Angelicchio and Kyle Hardy led the ULMS field to the green; Hardy used his outside starting spot to gain the lead going down the back straight. Hardy and Angelicchio exchanged slide jobs for the top spot for a few laps before Hardy began to pull away. As Hardy started to check out, Angelicchio had his hands full with challenges from Michael Lake, Chad McClellan, and Jason Miller. Numerous drivers were exchanging positions through the field, with Hardy still setting a torrid pace. Hardy led all 30 laps to earn his first win of the year in the Super Lates at the Dog Hollow. Angelicchio was second, followed closely by Jason Miller, Ryan Montgomery, Chad McClellan. Angelicchio set fast time, won the Scramble and the first heat race. Angelicchio set a new track record of 15.513.

The 20-lap 358 Limited Late Model feature saw Paul Ivory set the pace at the drop of the green. He appeared to be on his way to victory, leading the first 16 laps of the event. Mt. Union’s Shawn Shoemaker had other ideas and was able to drive by on the next lap. It was quite a battle going on from third back up to this point. Shoemaker led the final four laps but held off Greg Moore by a couple of door panels to claim the $1,500 win. Moore was second ahead of Chris Hackett, Kyle Lear, Clinton Hersh, Bryan Benton, Rob Marhefka, Austin Stover, Paul Ivory, and Eric Lucas.

In the 15-lap RUSH Stock Cars and Pure Stocks, it was all Brad Benton. Rich Anderson chased Benton for 14 laps before he suffered a problem. Benton coasted home to his second win this season. Ron Benton, Dennis Collins, Tim Laughard, Jeremy Zufall. Tim Laughard’s fourth-place finish earned him the win in the RUSH Stock class over Zufall, Torquato, and Argent.

It was a family affair in the 12-lap 4-Cylinder main. Mike Phillipson led lap one but was passed by his nephew Dylan Young. Dylan held off Phillipson and his young brother Cody lap after lap. Dylan Young was able to bring his machine home for his second win of the season. Mike Phillipson, Cody Young, Ashton Daughenbaugh, Noah Swank.