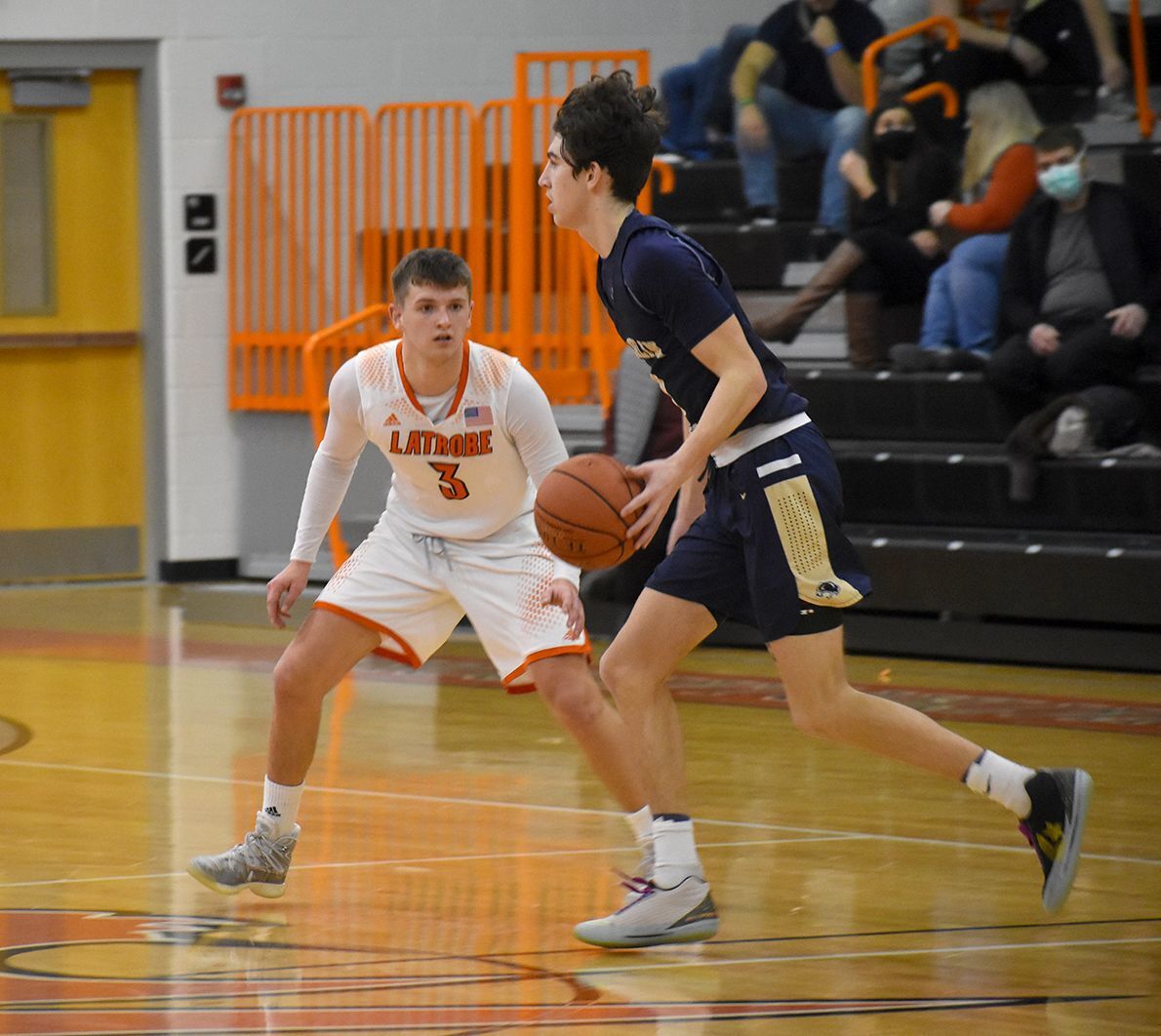 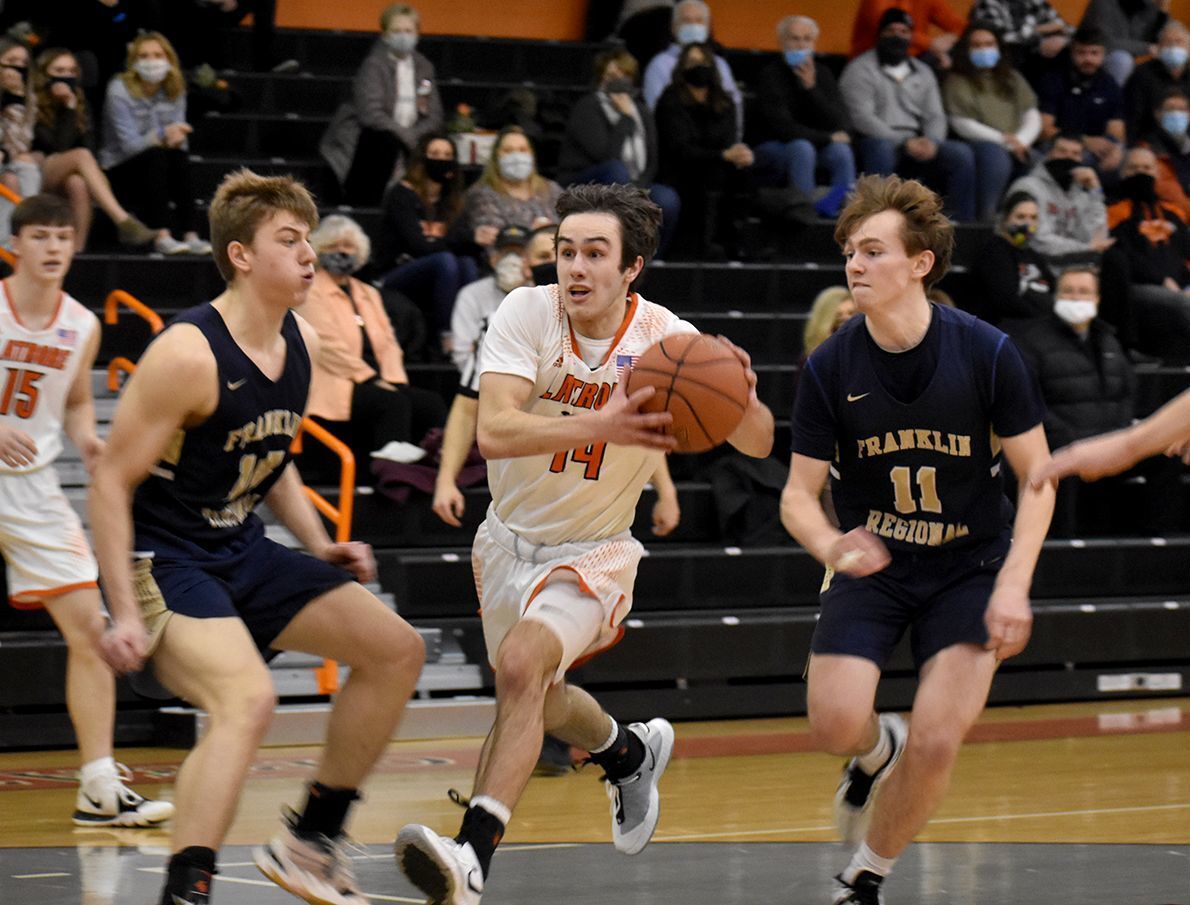 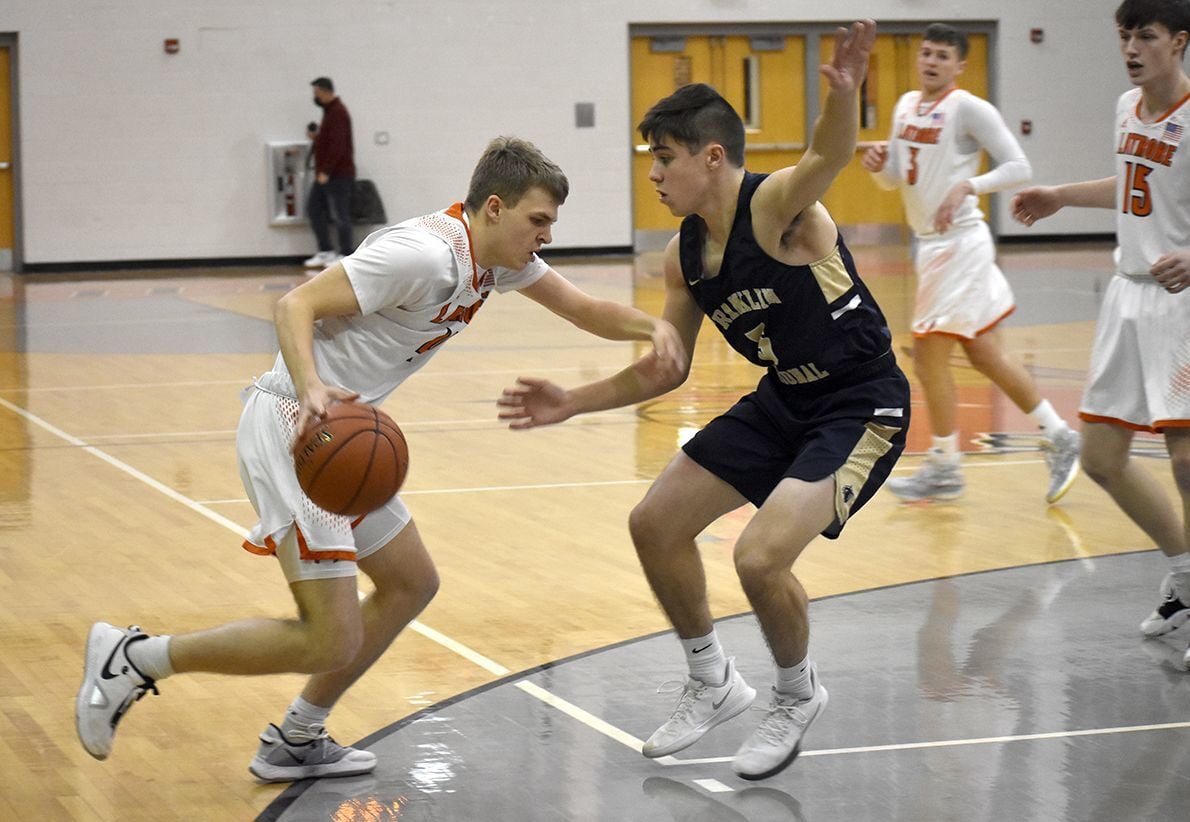 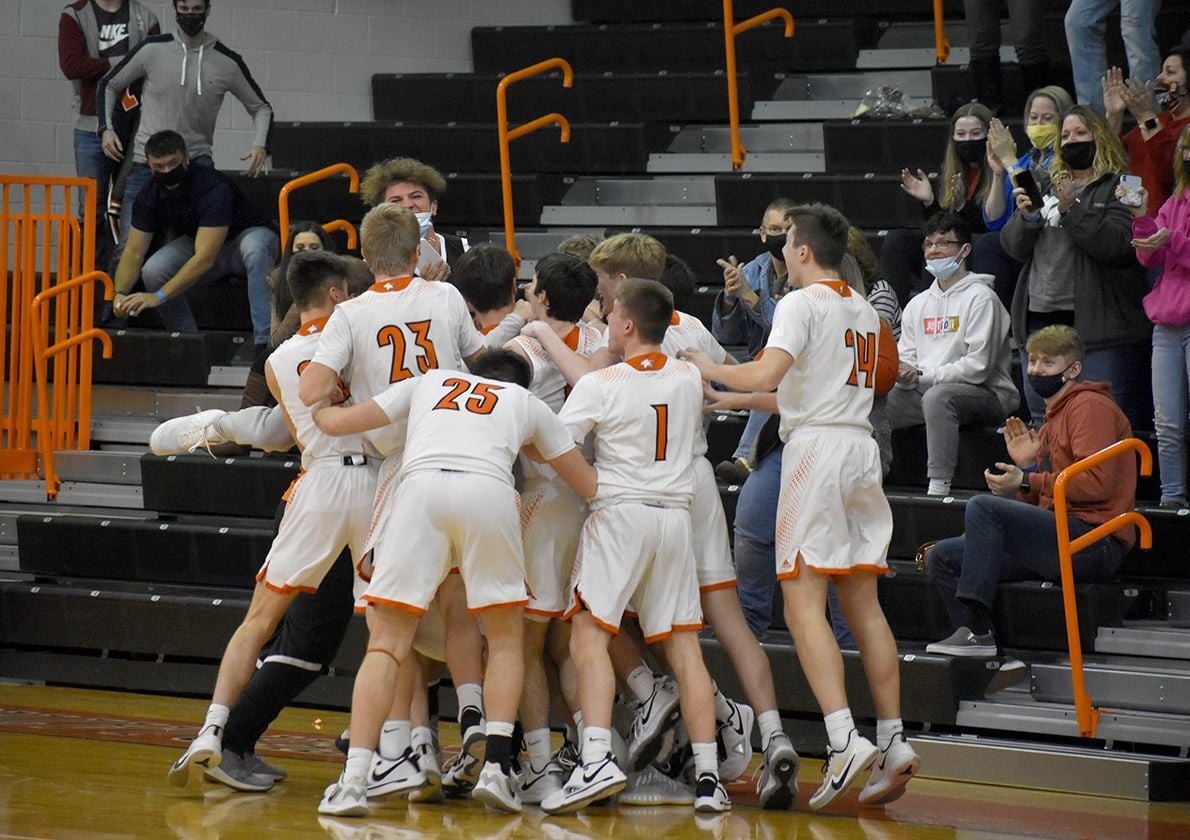 There’s something synonymous with the name “Sickenberger” and game-winning, three-point shots this season for the Greater Latrobe basketball team.

“It’s in the blood, I guess,” responded Chase Sickenberger, a 6-foot junior guard.

There have now been — not one, not two, but — three of those... shots in the final seconds that have won section games, that is. And two of those were buzzer-beaters.

Just a week and a half ago, it was Chase Sickenberger hitting a three-pointer as time expired to beat McKeesport Area. Earlier this season, senior point guard Ryan Sickenberger did it against Woodland Hills with eight seconds left.

In a section game that featured six ties and 10 lead changes, the last being the most important one right at the end, it was Ryan Sickenberger’s trey at the buzzer from near the top of the key — after a double-clutch, no less — that staked Greater Latrobe to a 56-53 home victory over Franklin Regional on Senior Night.

Back on Jan. 8, following a 27-day layoff because of the coronavirus (COVID-19) pandemic, the Wildcats lost at Franklin Regional by 30 points, 68-38.

The win assures Greater Latrobe (6-3, 6-5) of finishing in third place in the seven-team WPIAL Class 5A Section 3 standings. Three of the Wildcats’ section games have been canceled, including their last two — Friday at Woodland Hills and next Tuesday at home vs. Penn Hills — for one reason or another related to the virus.

“These seniors have gone through the program, and tonight, I thought it was their will and resolve,” expressed Greater Latrobe head coach Brad Wetzel. “I just thought they wouldn’t be denied.”

The Wildcats, who handed Franklin Regional only its second section loss, have six seniors on this season’s roster, three of them in the starting lineup while guards Michael Shoemaker and Patrick Shimko gave Greater Latrobe some quality minutes. This time against Franklin Regional (5-2, 5-4), they accounted for 37 of the team’s points.

It was Ryan Sickenberger getting a game-high 17 points while sophomore guard Landon Butler was right behind with 16. Senior guards Drew Clair and Frank Newill had nine and seven, respectively, and senior guard Nick Rauco four off the bench, including two huge free throws coming down the stretch — both of them in a one-and-one — that gave Greater Latrobe a three-point lead at the time.

Because the Wildcats needed them.

“The pressure was definitely on to make it a three-point game. I just had to hit them,” remarked Rauco, who’s counted on more for his defense.

Right before those free throws, Clair fouled out. In fact, Greater Latrobe played through foul trouble from the second quarter on as Newill and Butler finished the game with four, and Chase Sickenberger and Rauco three.

“I know there’s guys on the bench to pick me up,” Clair stated. “I trust them that I can play hard.

“It’s never good when the game is on the line and you can’t be there to help the team. But I just tried to do my part on the bench, still.”

Clair’s fifth foul put Franklin Regional senior guard Luke Kimmich on the line for a one-and-one. But Kimmich, who finished with 11 points for the Panthers, missed the front end before Rauco converted both of his to give the Wildcats a 52-49 edge.

Good thing, too, because Franklin Regional went right down the floor and got a three from Kimmich to tie it at 52. Greater Latrobe then ran off some clock and, when Ryan Sickenberger got trapped along the baseline, Wetzel called a timeout with 1:16 left.

However, the Wildcats did commit a turnover, and Kimmich made the front end of another one-and-one, and the Panthers were up by one with 25.5 seconds to play. But Greater Latrobe’s Newill was fouled rebounding Kimmich’s miss on the second attempt, and — with the Wildcats now in the double-bonus — he made one of two free throws, and it was deadlocked again, 53-53.

Franklin Regional called a timeout with 19 seconds to go, but a turnover gave the ball back to Greater Latrobe at :06.6. That’s when Ryan Sickenberger did his thing, weaving his way around an Franklin Regional defender and just to the left of the top of the key, where he let fly with the three-pointer that went through the net as the buzzer sounded.

“Frank (Newill) set a good screen and got me open,” Ryan Sickenberger recalled. “I knew I had six seconds. I was counting in my head.

“(The shot) got a little contested, so I had to improvise,” he said, referring to the double-clutch.

“We had a lot of guys step up, as usual,” Newill offered. “We have such good team chemistry.

“We just always have those guys, no matter what. If someone’s having an off night, we’re right behind them to pick it up.”

Not to be overlooked was Chase Sickenberger. Although he had only three points, he drew the assignment of defending Franklin Regional’s Kadyn Hannah and held the high-scoring 6-foot-4 senior forward to 14.

“He had one heck of a challenge defensively,” was how Wetzel put it.

“Coach gave me a job tonight...to guard (Hannah), and I did as best I could,” Chase Sickenberger responded.

“(Chase Sickenberger) got us that win,” Newill added. “If he doesn’t do what he did tonight, we don’t walk away with (a win).”

In the first half, one team led by seven in the first quarter, and the other by eight in the second.

Successive field goals by Ryan Sickenberger, the second a floater, put the Wildcats ahead, 15-8. But the Panthers scored the last eight points of the opening period, with junior guard Caden Smith and Kimmich combining on five of seven free throws.

Greater Latrobe went back in front, 20-18, on the first of Ryan Sickenberger’s two threes and a basket by Newill before Franklin Regional pulled even and then forged into the lead by as many as eight points 30-22 and 32-24. The Wildcats had it down to 32-29 following a three-point play and a pair of free throws from Butler, but the Panthers got the last bucket of the half for a 34-29 lead.

And it was tight the entire second half with seven being the biggest lead by either team. That was Franklin Regional midway through the third quarter, 40-33.

But two threes by Clair, one from beyond the arc and the other a conventional play, made it a one-point game, 42-41. Newill then closed out the frame with a field goal to regain the lead for Greater Latrobe going into the fourth.

And the Wildcats had it up to five, 47-42, to begin the fourth. However, Franklin Regional worked it way back into the lead at 49-48, and it changed hands three more times, the last on Ryan Sickenberger’s heroics for Greater Latrobe’s sixth section win in nine games.

“It’s been a good run the whole way through,” Newill concluded. “To be (third) in the section, I think it just a testament to how hard we work and how much we’ve pushed through.”

The top scorer for Franklin Regional was Smith with 15 points. Following Hannah’s 14 points was Kimmich with 11, and senior guard Jeffrey Downs with eight.

With the Wildcats’ final two section games postponed, they will take the court once more before entering the WPIAL Class 5A playoffs. Greater Latrobe is scheduled to host Class 3A Ligonier Valley, 7:30 p.m. Wednesday.

Even though 10 players scored, Greater Latrobe’s junior varsity was nearly doubled up in a 62-32 defeat to Franklin Regional. Ben Hamaty had seven points, and Zach Marucco five for the Wildcats, who fell to 1-10.