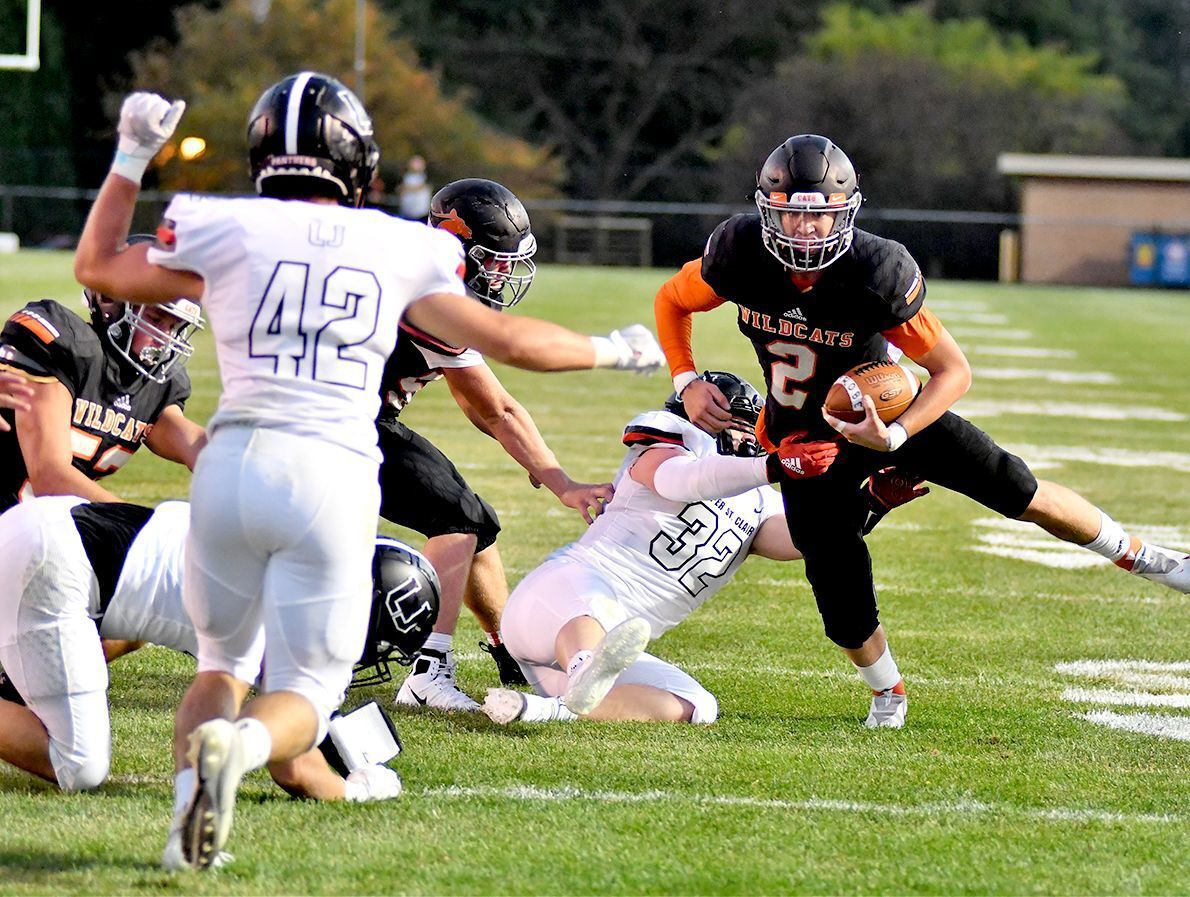 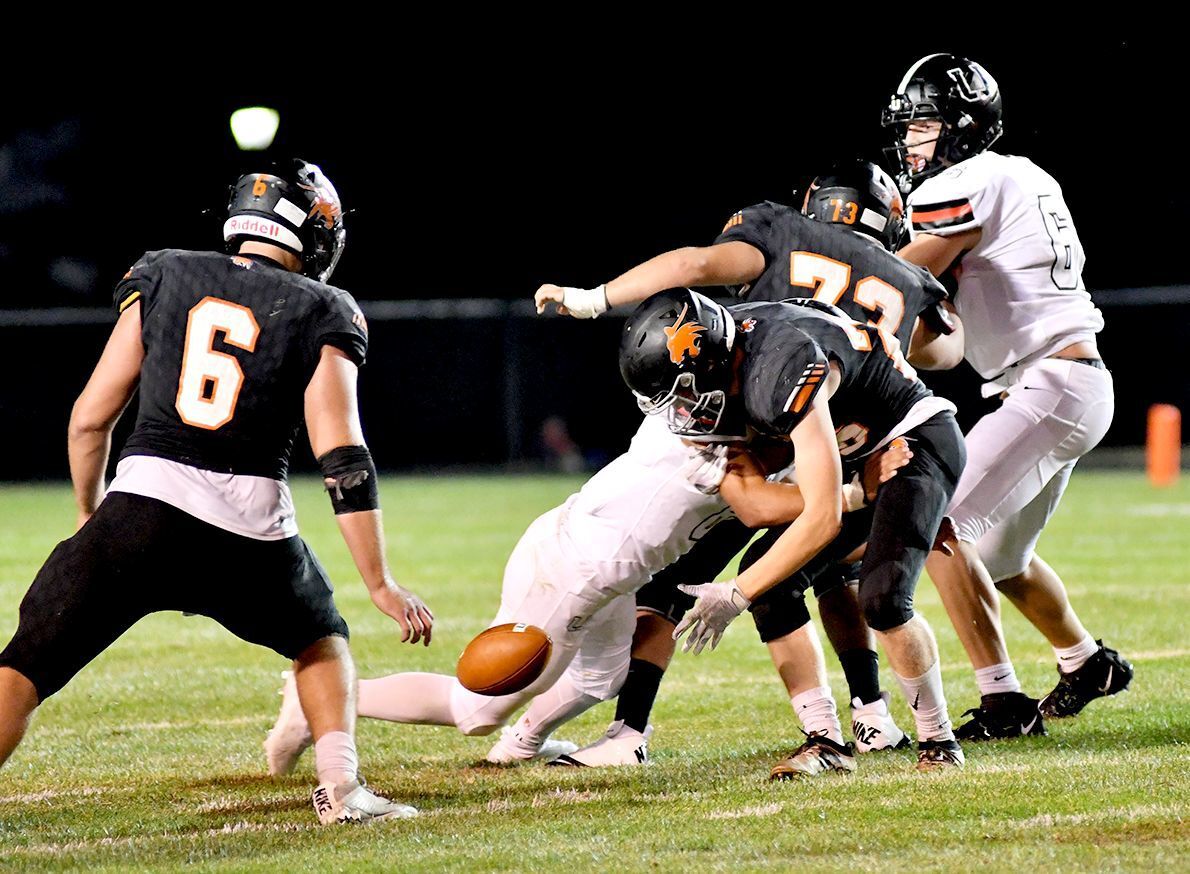 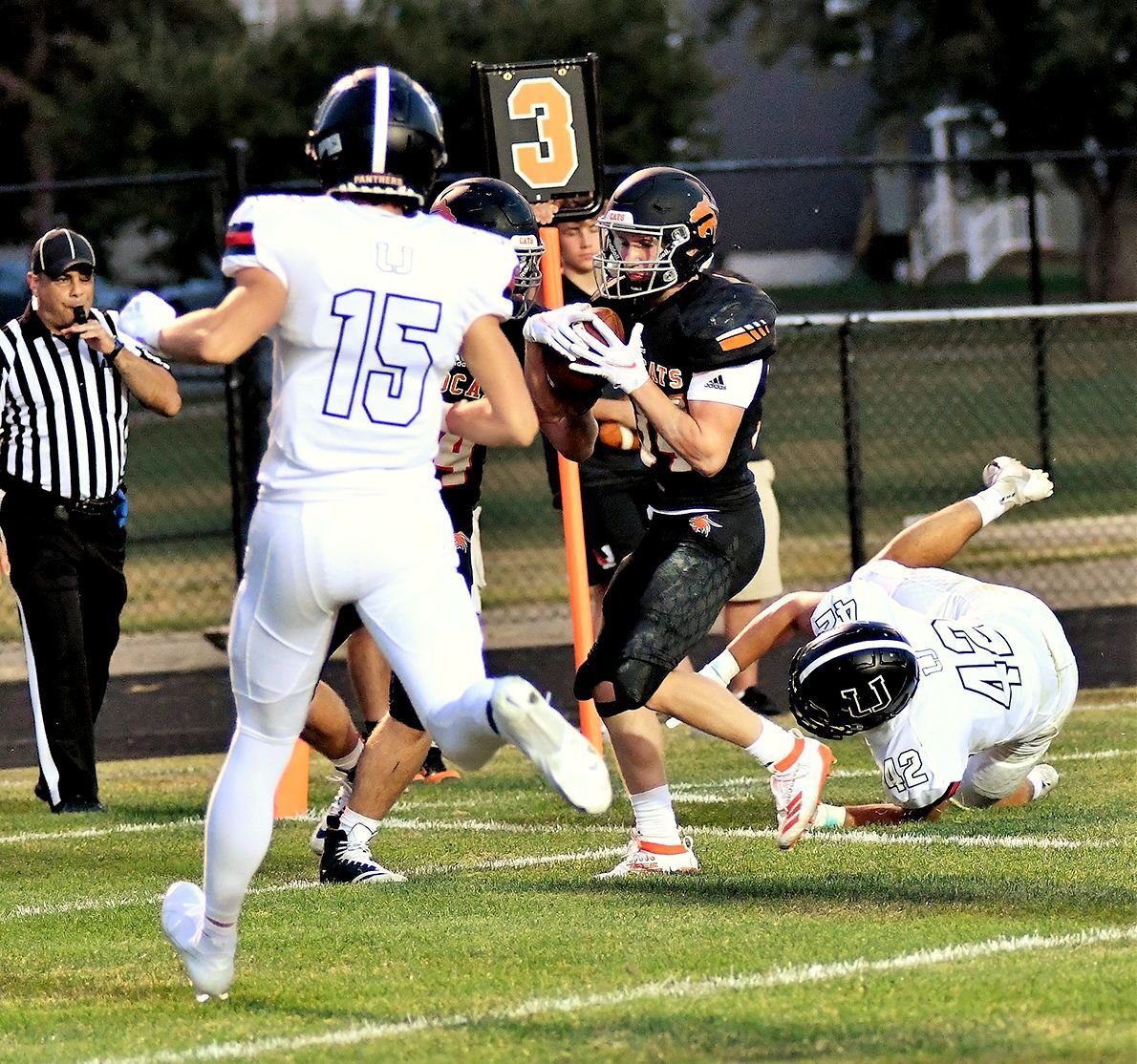 Greater Latrobe’s Nate Stemmerich slips into the end zone on a two-yard run in the first quarter during an exhibition game played Friday against Upper St. Clair at Latrobe’s Memorial Stadium. Stemmerich had four receptions for 71 yards and his rushing touchdown, the first of six scores for the Wildcats during a 52-44 setback. 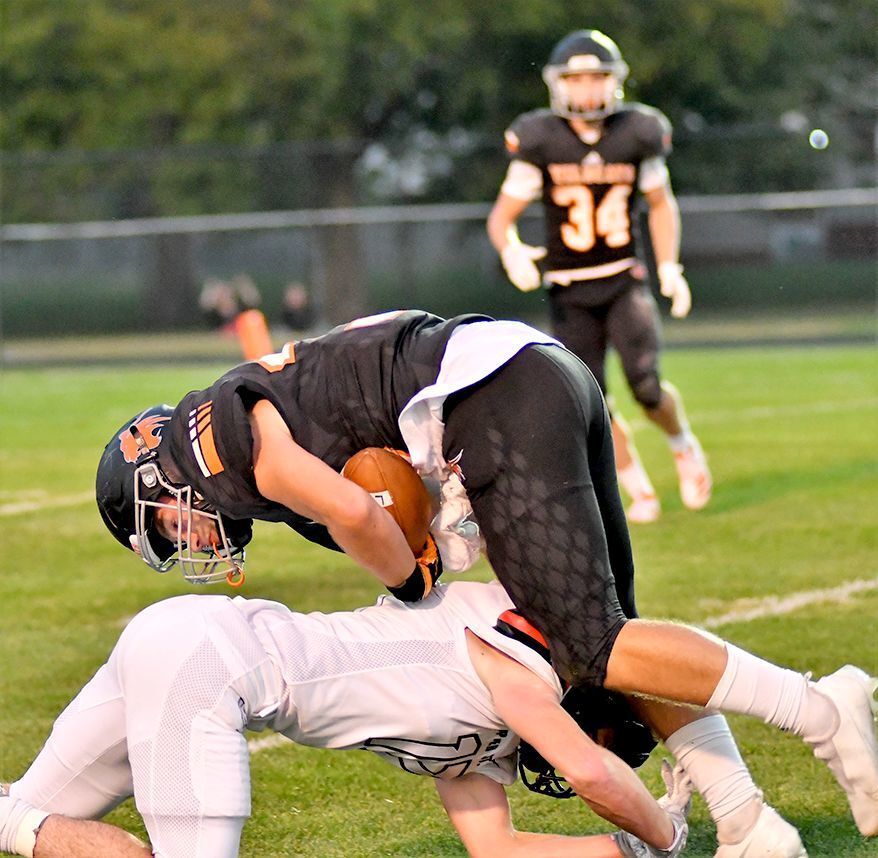 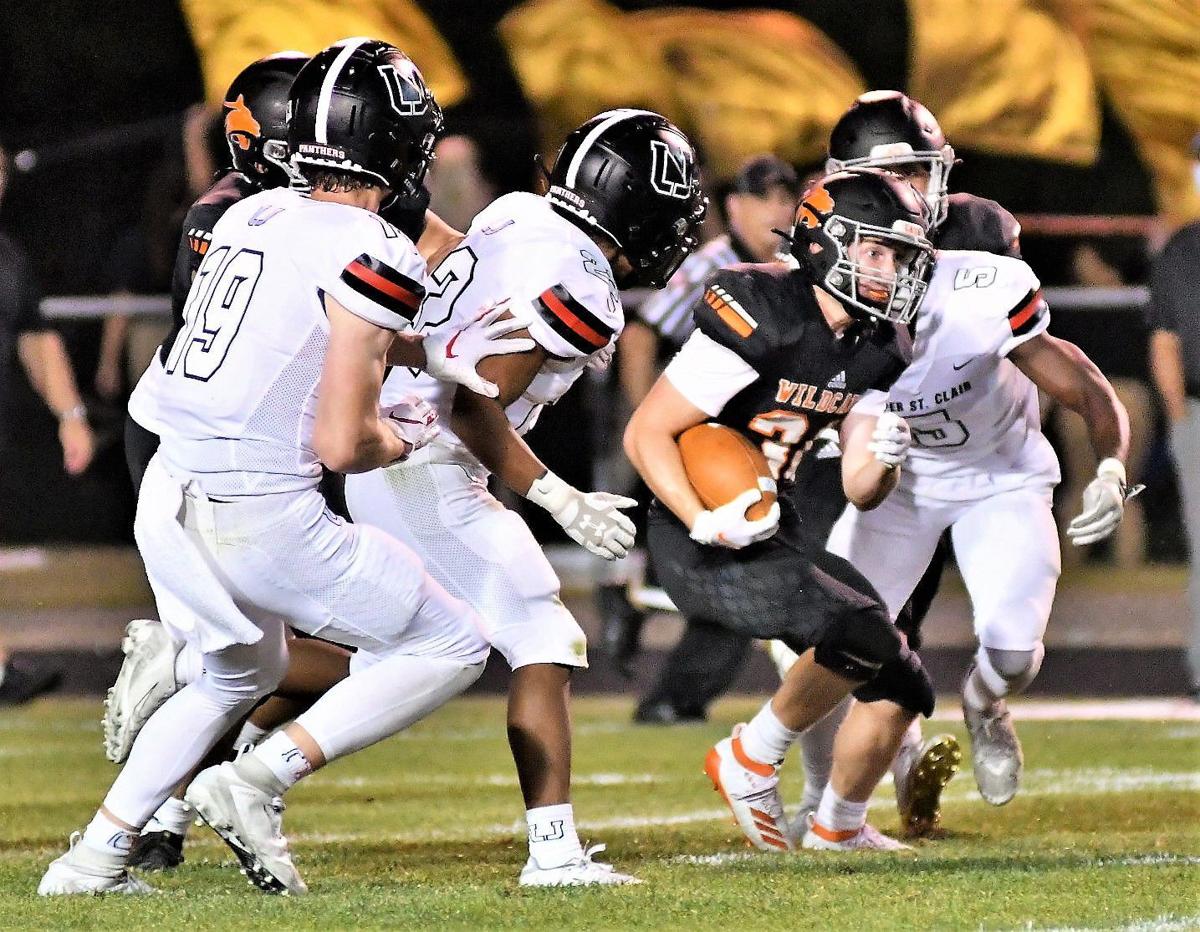 Greater Latrobe’s Nate Stemmerich slips into the end zone on a two-yard run in the first quarter during an exhibition game played Friday against Upper St. Clair at Latrobe’s Memorial Stadium. Stemmerich had four receptions for 71 yards and his rushing touchdown, the first of six scores for the Wildcats during a 52-44 setback.

The Greater Latrobe football team, trailing by 12 points in the first half, and 23 points in the fourth quarter, could’ve easily rolled over and mailed it in against Upper St. Clair, the No. 5-ranked team in Class 5A.

Not these Wildcats. Not on this night.

Greater Latrobe threw a serious scare into one of the top teams in Class 5A and took Upper St. Clair to the limit, but the Wildcats’ comeback bid fell just short, as the Panthers escaped with a 52-44 victory during a back-and-forth, high-scoring non-conference affair Friday at Latrobe’s Memorial Stadium.

“I’m proud of every single one of those guys,” Greater Latrobe coach Jason Marucco said. “We recognize that we need to beat teams like Upper St. Clair if we want to get this program in the next direction. They stepped it up and I think we got some respect around the WPIAL.”

The two teams combined for 96 points and 1,076 yards of total offense, as both attacks eclipsed 500 total yards. It was Greater Latrobe’s highest scoring output since a 48-0 rout against Albert Gallatin on Oct. 19, 2018. The teams scored on eight of 12 possessions in the first half and seven of 13 in the second half.

Greater Latrobe’s Landan Carns completed 19 of 35 passes for 363 yards with four touchdown passes and one interception. Tucker Knupp caught six passes for 107 yards and two scores for the Wildcats, while Dylan Gustafson finished with 101 yards receiving, two touchdown receptions and a rushing score. Luke Zylka caught five passes for 80 yards, while Nate Stemmerich had four receptions for 71 yards and a rushing touchdown.

Upper St. Clair did most of its damage on the ground, rushing 41 times for 452 yards, while Greater Latrobe attacked through the air, completing 20 of 38 passes for four touchdowns, two interceptions and 408 yards. The Wildcats ended with 525 yards, while Upper St. Clair racked up 551 yards of total offense.

“Obviously, with stats like that, you would think you’d win the football game,” Marucco said. “They just made a couple more plays than us.”

Greater Latrobe trailed by 12 points, 29-17, late in the second quarter, but made it a one-score game, 29-23, by halftime. The Wildcats fell into a deeper second-half hole, as Upper St. Clair led by 23 points in the fourth quarter, 46-23. But Greater Latrobe battled back and put itself in position for the potential tie, 52-52, late in the fourth quarter before ultimately coming up short.

“It’s the effort and resolve of our football team,” Marucco said. “We talk about winning every play, and playing for the next play, and we’re doing that on Friday nights. That’s how we’re keeping ourselves in the game and giving us a chance to win or tie in the end.”

Then, the Wildcats started their comeback.

Carns tossed his second touchdown of the game, this one a 30-yarder to Knupp to give Greater Latrobe early fourth-quarter momentum. A two-point pass failed and Upper St. Clair led 46-29 in the first minute of the fourth.

An ensuing Upper St. Clair punt forced Greater Latrobe to drive 85 yards. The Wildcats came through with three first downs before Carns tossed his third touchdown of the game to Gustafson, a 49-yarder on second-and-10 to make it a 46-36 game with less than seven minutes to play.

Upper St. Clair returned the kickoff to Greater Latrobe’s 30-yard line, and Hiester added a key insurance score two plays later with a 15-yard run, his third touchdown of the game, to give the Panthers a 52-36 lead with 6:22 left.

Still, the Wildcats nearly rallied from the 16-point hole in the final six minutes. Carns hit Zylka on back-to-back first-down passes three plays before a 30-yard touchdown pass to Knupp. Kyle Brewer’s two-point run made it a 52-44 game with 5:11 to play.

Then, the Greater Latrobe defense came through with its biggest stand of the game when the Wildcats picked off Dahlem on the next possession. Knupp stepped in front of a screen pass, giving Greater Latrobe life, and the opportunity to tie the game with 2:46 to play.

And the Wildcats nearly reached the end zone again, but a Carns pass on second-and-10 from the Upper St. Clair 30-yard line was a touch too far for a wide-open Stemmerich. Two more incomplete passes gave possession back to Upper St. Clair, which picked up a first down on third-and-3 before running out the clock.

“I think we saw throughout the ebbs and flows of the game, the crowd was behind us,” Marucco said, referring to parents of football, band and cheer, which were allowed in the stadium.

“You certainly saw our kids feeding off of it.”

John McHenry opened the scoring with a career-long 38-yard field goal, which was set up by Bobby Fetter’s 45-yard halfback pass to Stemmerich on the second play of the game.

The Wildcats managed a 10-0 lead after an Upper St. Clair punt, one of just two in the game. Carns connected on three passes longer than 18 yards to set up Stemmerich’s 2-yard touchdown run on a jet sweep.

Brown scored his first touchdown from 44 yards out, as a two-point pass put Upper St. Clair on the board, 10-8. The Panthers scored their second touchdown less than a minute after a Greater Latrobe interception, as Hiester’s 16-yard run gave Upper St. Clair a 15-10 lead.

A punt attempted sailed over Gustafson’s head, leading to Upper St. Clair’s next score, Brown’s run from 10-yards out, which gave the Panthers a 29-17 edge. But the Wildcats had the final score of the half, 29-23, as Gustafson hauled in a 52-yard touchdown along the sideline on a fourth-and-4.

Upper St. Clair sought to put the game out of reach with a 17-point third period and a 23-point fourth-quarter lead. Abelardo Sobarzo kicked a 30-yard field goal and Brown added touchdown runs of 48 and 61 yards, as the Panthers opened a 46-23 advantage.

The Wildcats turned the ball over on downs and threw an interception during their lone possessions of the third quarter. But they regrouped in the fourth quarter and nearly pulled off the seemingly improbable 23-point rally against the No. 5 Class 5A team in the WPIAL with three touchdowns in the final 12 minutes.

“It was the resolve of our kids and the back-and-forth nature of that game,” Marucco said. “Even defensively when we were struggling, we got a couple stops when we needed them, and we were able to answer offensively.

“We said coming into this game, we weren’t going to leave anything in the bag, and I think we threw it all at them. To their credit, they made a couple more plays than us.”