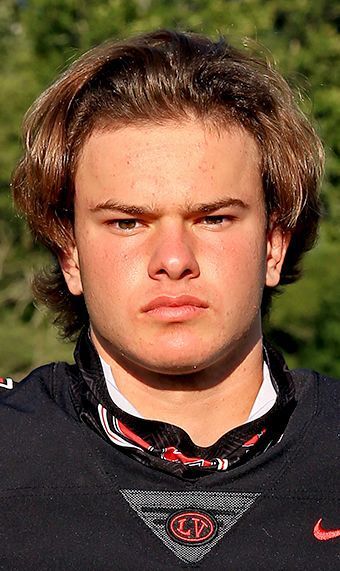 WAYNESBURG — It was an old-fashioned Ligonier Valley rout.

Ligonier Valley is six games into its switch to the WPIAL with a young football team, but the visiting Rams went back to their roots during a 42-6 non-conference rout against Waynesburg Central on Friday.

“Ultimately, in the end, it’s nice to come down here and get a victory,” Ligonier Valley coach Roger Beitel said.

Ligonier Valley enjoyed a dominant District 6 run the previous four seasons before the school board voted last year to move to the WPIAL for all athletics beginning in the 2020-21 season. The Rams won 51 of 55 football games, appeared in four PIAA District 6 Class 2A title games — winning two of them — they reached the state semifinals and quarterfinals, and won four consecutive Appalachian Bowl and District 6 Heritage Conference championships.

Ligonier Valley hasn’t steamrolled the competition with the same regularity after this season’s move to the WPIAL. But no doubt, the Rams have more than held their own in a season rife with challenge and adversity.

For starters, Ligonier Valley graduated 17 seniors, including 11 who continued their careers in college. The nomadic Rams have played five of six games on the road in six different counties this season — Armstrong, Fayette, Beaver, Westmoreland, Allegheny and Greene, on Friday. Ligonier Valley, with just 30 players on its roster, has also battled regular hardships associated with a football season in the middle of the current coronavirus (COVID-19) pandemic, as well.

“Each week, we’re growing and we’re getting better,” Beitel said. “I can’t say enough about the job our assistant coaches have done this season, with this team and under these conditions. It’s one of the best coaching jobs that we’ve done around here in a long time and all the credit goes to my assistant coaches.”

Friday’s game against Waynesburg Central was supposed to be one of two weeks in which the Rams did not have a game scheduled. An odd number of teams in Class 2A, prompted several to have an open week, while Summit Academy — Ligonier Valley’s original opponent on Friday — opted out of the season because of the pandemic.

The Rams went back to basics against Waynesburg Central.

Ligonier Valley scored the first five touchdowns and triggered the mercy rule by the third quarter. The Rams racked up 412 yards of total offense, while limiting Waynesburg Central (0-5, 0-6) to just 186 yards defensively. Ligonier Valley carried 40 times for 337 yards, led by a pair of 100-yard rushers in senior Nick Beitel and sophomore Haden Sierocky. The Rams didn’t punt all night, as Ligonier Valley converted six of seven drives into touchdowns.

That helped the Rams improve to 3-3 overall. Beitel is happy to see his team at .500, but he’s looking for more in next week’s regular-season finale, 7 p.m. Friday against Shady Side Academy at Weller Field.

“I kind of broke my rule and I told the kids that next week is a game that I really want to win,” Beitel said.

Beitel and this year’s Rams have an opportunity to make history. If Ligonier Valley defeats Shady Side Academy (1-2, 1-3) next Friday, the Rams will end the regular-season at 4-3 overall and finish with a non-losing record for the sixth consecutive season, a school record.

The current school record is five consecutive years with a non-losing record, shared by J.D. Jones once and Beitel twice in 17 seasons. A win against Shady Side Academy gives Beitel the outright record at six straight seasons.

“I never really talk about it,” Beitel said. “Ask my guys, forever and always, we always focus on other things and winning takes care of itself. But this is the one that we want to break. To be able to say that we broke a record next week, and to us to possibly finish 4-3 with this football team would be fantastic. I couldn’t be more proud.”

Friday’s rout of Waynesburg Central put the Rams in position to break the record.

Sierocky led the charge, as he figured in on five of the Rams’ six touchdowns. Sierocky had three rushing touchdowns, two passing scores and a two-point conversion throw.

Sierocky threw an interception on his first pass, but he settled to complete his next six, and final three, as the sophomore finished 9-of-10 for 75 yards with two touchdowns and the one pick. Sierocky also rushed 14 times for 118 yards, as he ended with 193 all-purpose yards.

Beitel led the ground game with 23 carries for 172 yards and a touchdown. He caught one pass for 14 yards and finished with 186 all-purpose yards. Grant Dowden added 47 yards rushing on three carries and Matthew Marinchak caught five passes for 44 yards, while adding a touchdown and a two-point conversion.

“To see our offensive line come out and control the line of scrimmage was great to see, especially with a new starter, Ty Wilkins, at left tackle,” Beitel said. “We got a lot of contributions from a lot of guys. Grant stretches the field horizontally, and Nick and Haden hit it vertically.

“We had a lot of things working. We really spread the wealth, so that was good to see.”

It took three plays and less than two minutes for the Rams to open the scoring. Beitel ripped off a 38-yard gain on the first play of the game and Sierocky scored on a 12-yard run two plays later to make it a 7-0 game.

“We got off to a real good start,” Roger Beitel said. “That first rush for Nick ... it was a big rush and it really flipped the field in a hurry. It all started with those guys up front. They really opened the holes.”

Ligonier Valley scored again before the end of the period. The Rams gained five first downs on a 12-play, 85-yard touchdown drive. Sierocky tossed his first touchdown to Miles Higgins, a two-yard dump off over the middle with eight seconds to play in the first quarter.

The Rams scored their third touchdown following a defensive stand.

Ligonier Valley overcame a block-in-the-back penalty and picked up four first downs on a 12-play, 77-yard series that started at its own 23-yard line. Sierocky figured in on his third touchdown with a five-yard run.

Sierocky orchestrated perhaps his finest series of the game when Ligonier Valley scored on the final play of the first half after holding Waynesburg Central to a quick three-and-out.

The Rams got the ball back with 56.1 seconds remaining, and Sierocky drove Ligonier Valley 39 yards in six plays with just one timeout. Sierocky connected with Marinchak on a 15-yard fade and George Golden’s extra point cleared the bar as time expired, giving Ligonier Valley a 28-0 halftime lead.

“We managed that two-minute offense with one timeout,” Beitel said. “We work on that every week and it was nice to actually see us get a chance to use it.”

Ligonier Valley gained 276 yards in the first half. The Rams’ defense limited Waynesburg Central to just 43 yards in the opening half.

The Ligonier Valley offense struck again after a defensive stand forced a turnover on downs to start the second half. The unit overcame a false start and a holding call, picking up five first downs on the nine-play, 68-yard series. Beitel scored from one-yard out and Sierocky connected with Marinchak for the two-point conversion to trigger the mercy rule.

Waynesburg Central’s Darnell Johnson spoiled the Ligonier Valley shutout bid with a 10-yard touchdown run in the fourth quarter, but the Rams closed it out with a score in their final possession. Beitel broke off a 31-yard run and Sierocky scored his fifth touchdown on the next play from 12 yards out.

That set the Rams up with a chance to make history in next week’s regular-season finale against Shady Side Academy.

“It was an all-around great team effort,” Beitel said. “Now, we’re 3-3 and it’s fantastic. We have an opportunity to set a school record with the most consecutive non-losing seasons in a row. That would be awesome to break that one.”