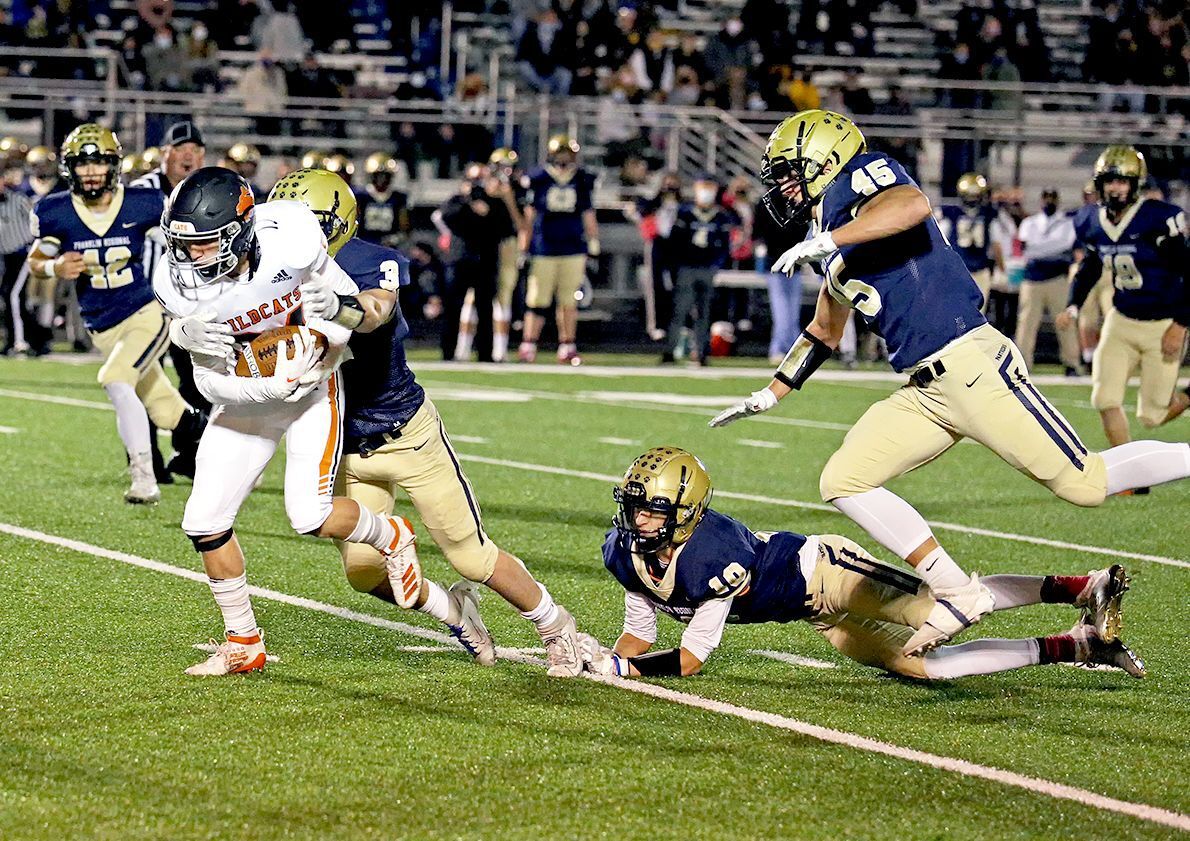 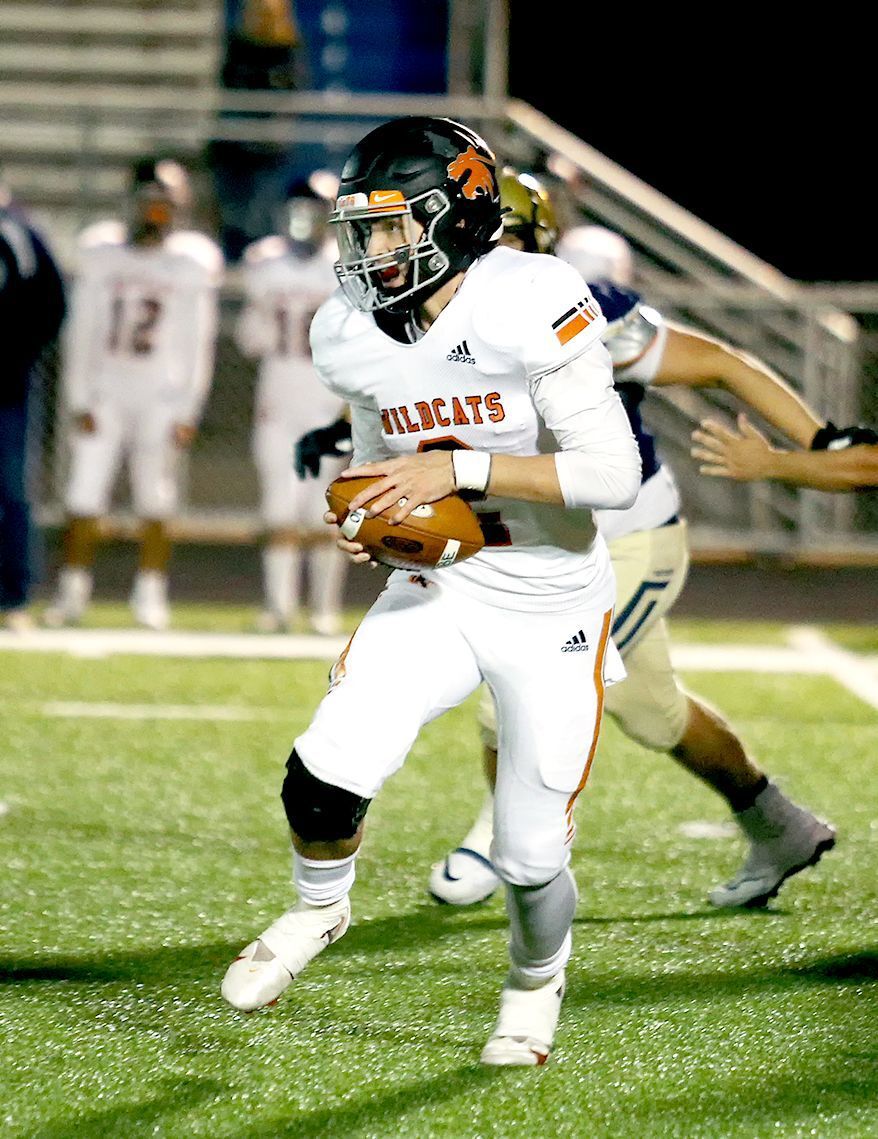 Greater Latrobe quarterback Landan Carns is able to escape the pressure in the backfield and turn it into a big gain up the middle during a WPIAL Class 5A Big East Conference game played Friday at Franklin Regional. Carns finished 9 of 17 for 148 yards and an interception. 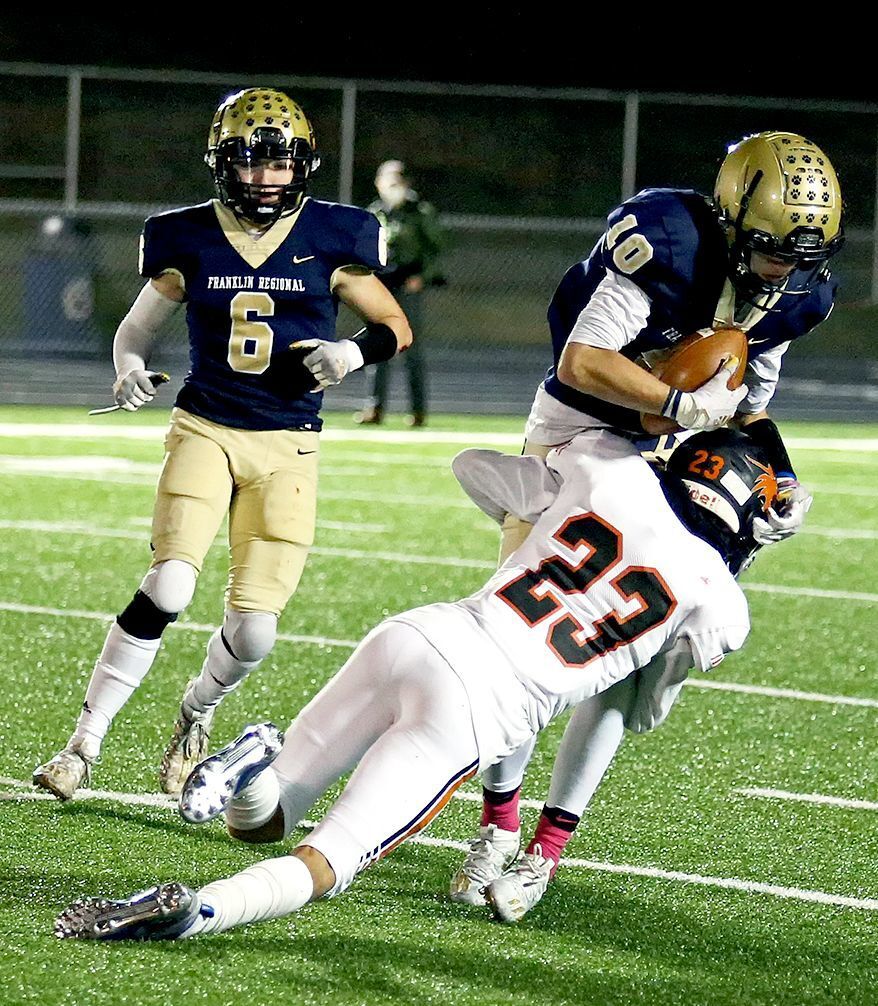 Greater Latrobe’s Marco Mongelluzzo is tight on punt coverage, as he gets to Franklin Regional’s Jeffrey Downs, as he catches the ball, while teammate Mario Sarnic is unable to block for the return, which didn’t net any yardage. 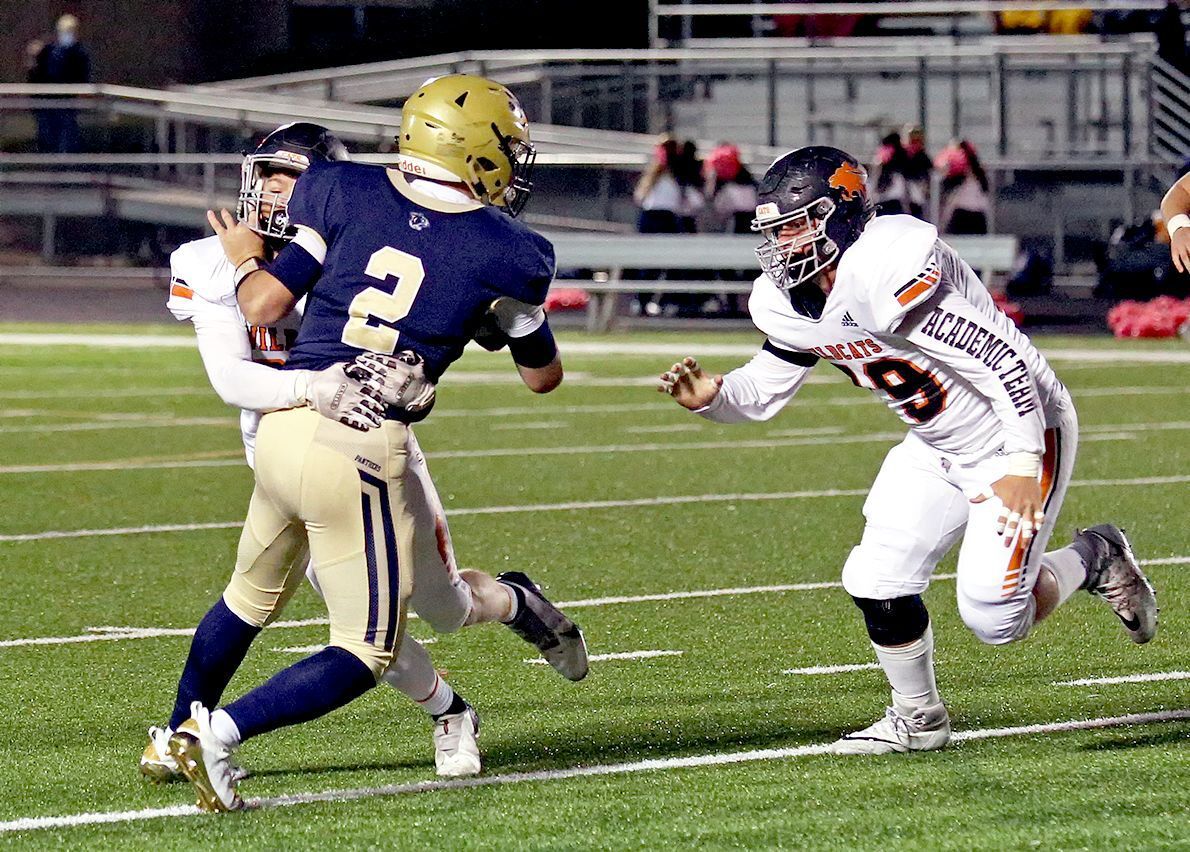 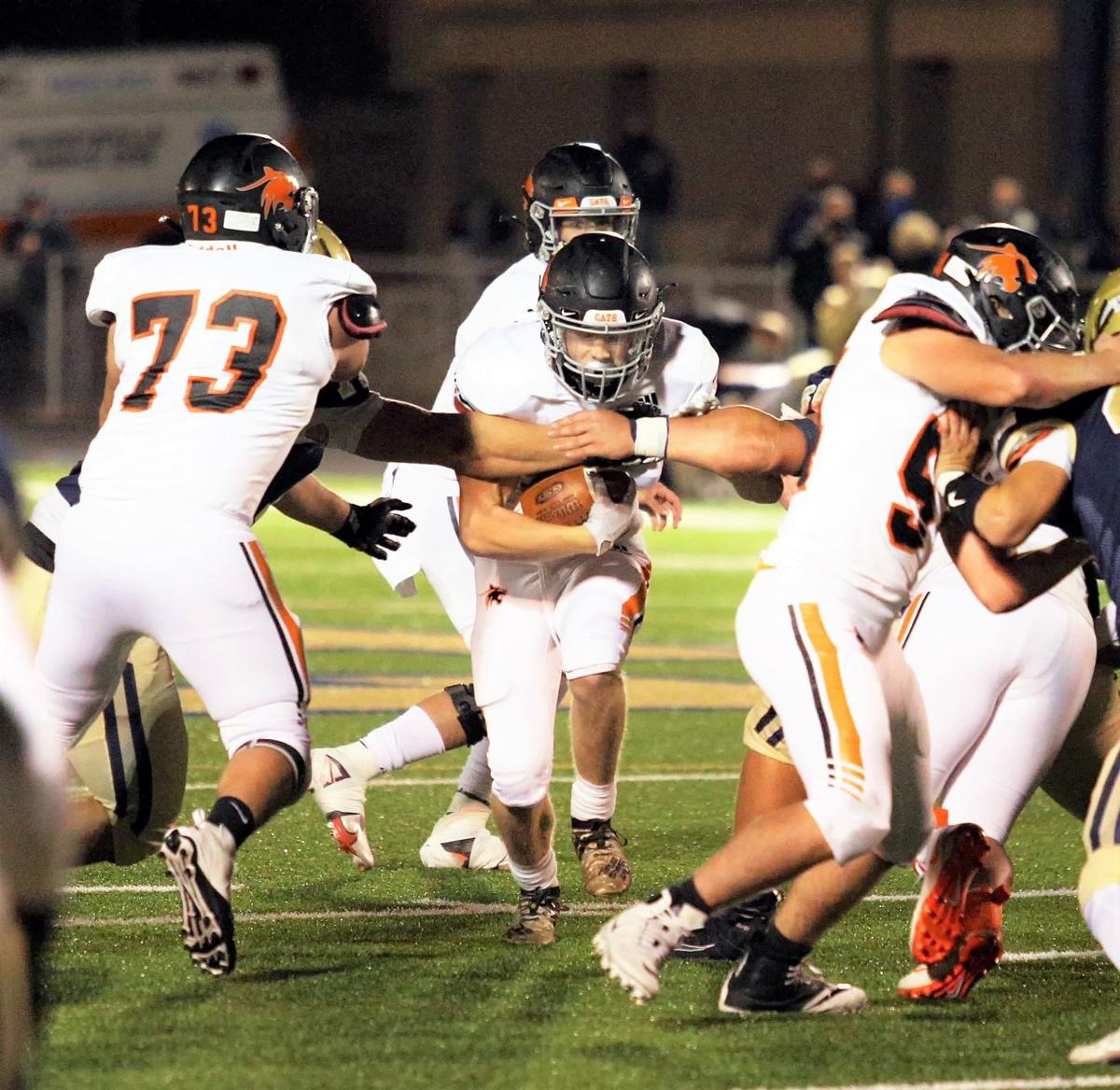 Greater Latrobe running back Dylan Gustafson finds a hole up the middle during the first quarter of Friday's WPIAL Class 5A Big East Conference game against host Franklin Regional. The Panthers edged the Wildcats for a 27-14 victory.

Greater Latrobe quarterback Landan Carns is able to escape the pressure in the backfield and turn it into a big gain up the middle during a WPIAL Class 5A Big East Conference game played Friday at Franklin Regional. Carns finished 9 of 17 for 148 yards and an interception.

Greater Latrobe’s Marco Mongelluzzo is tight on punt coverage, as he gets to Franklin Regional’s Jeffrey Downs, as he catches the ball, while teammate Mario Sarnic is unable to block for the return, which didn’t net any yardage.

Greater Latrobe running back Dylan Gustafson finds a hole up the middle during the first quarter of Friday's WPIAL Class 5A Big East Conference game against host Franklin Regional. The Panthers edged the Wildcats for a 27-14 victory.

MURRYSVILLE — A quick start to Friday night’s WPIAL Class 5A Big East game gave host Franklin Regional an early edge over Greater Latrobe. But it was the Wildcats’ struggles to finish red zone drives with points that really tilted the contest.

The Panthers took the lead on the game’s first possession and never trailed on their way to a 27-14 win.

Franklin Regional (2-1, 4-2) got the jump on the Wildcats early as Caden Smith booted the opening kickoff into a vacant area along the Panthers’ sideline and Mario Sarnic hustled downfield to cover the loose ball at the Greater Latrobe 28-yard-line.

The Wildcats (1-2, 2-3) had a chance to respond quickly after Luke Zylka’s kickoff return set his team up at midfield and a conversion on fourth down kept the drive alive. Greater Latrobe reached the red zone, but the Panthers stuffed quarterback Landan Carns on fourth-and-3 from the 18 to end the threat.

It was the first of three empty red zone trips for the Wildcats, the other two coming in the fourth quarter.

“I thought our defense really stepped up tonight and did a nice job of getting stops when we needed them to keep us in the game,” Greater Latrobe coach Jason Marucco said. “We got ourselves down in the red zone and offensively, we just didn’t finish tonight.”

Franklin Regional extended its lead in the second quarter when Brncic hit Sarnic slanting over the middle and the senior receiver hurdled a defender on his way to a 35-yard score.

Greater Latrobe cracked the scoreboard on its next possession. Carns threw for 49 yards on the drive and Dylan Gustafson notched his longest run of the night — a 20-yarder — to set up Drake Clayton’s four-yard touchdown run with 1:11 remaining in the first half.

The Panthers regained a two-touchdown edge almost immediately, as Jerraine Turner took the ensuing kickoff, found a seam and sprinted for an 84-yard score. Turner also hauled in an interception in the contest.

“A couple of the big points in the game were the (opening) kickoff, getting that ball down there in good field position and scoring,” Franklin Regional coach Greg Botta said, “and another one was our return after they scored. It kind of broke that momentum.”

Greater Latrobe ramped up the pressure on Brncic in the second half, timing up the snap count and bringing extra defenders off the edges to try to disrupt Franklin Regional’s offense.

The blitz-heavy scheme employed by the Wildcats contributed to costly penalties against Franklin Regional. The Panthers were flagged 12 times for 108 yards in penalties. Many of those came in the form of pre-snap offensive penalties or holding infractions.

“When you play a team like that that’s very aggressive and very physical, kids want to get off the ball first,” Botta said. “Our offensive line is very young. There’s only one senior on that offensive line. It’s something we’ve got to get better at if we’re going to play P-T (Penn-Trafford) next week and be able to compete with them.”

The Panthers, after a failed fourth-down conversion attempt on their opening drive of the second half, spotted an opportunity to use the Wildcats’ aggressiveness against them during the next possession.

Brncic dropped back to pass and offered a convincing pump fake that left Downs wide open downfield for a 38-yard touchdown to put the Panthers ahead 27-7. Brncic handled the Wildcats’ pressure well, finishing 16-of-26 through the air for 220 yards and three scores.

Just as Franklin Regional had done in the first half, Greater Latrobe matched the score on special teams. After initially mishandling a kickoff around his own 18-yard line, Greater Latrobe’s Kyle Brewer scooped up the loose ball, made a few Panthers miss and burst free for an 80-yard touchdown.

That was it for the scoring. The Wildcats reached the red zone on their final two drives before turning the ball over on downs both times.

Gustafson, who entered the game fresh off a 171-yard, three-touchdown rushing performance last week at Connellsville Area, had a tough time finding running lanes against the Panthers.

“I’m sure that was a focal point for them coming off last week and the night he had,” Marucco said of the Panthers limiting Gustafson’s inside running success. “I thought at times we ran it good enough. We understood coming into the game that we were going to have to hit some big plays in the passing game to either flip the field or get scores. We had a couple opportunities to get that, we just didn’t finish.”

Greater Latrobe got its biggest play in the passing game to start its final drive, as Carns found Nathan Stemmerich open behind the coverage for a 70-yard gain down to the Franklin Regional 15. But Greater Latrobe lost yardage on two of its next three plays and turned the ball back over to the Panthers after a fourth-down pass completion came up well short of the sticks.

“It was just missed opportunities,” Marucco said. “There were some self-inflicted things with the penalties, especially in the first half when we’d get some things going and not be able to sustain it because we got behind the sticks. We had been very good about not doing that all year.”

Colton Johns posted a game-high 104 rushing yards on 14 carries for the Panthers, while Sarnic had six catches for 105 yards and a score and Downs added four grabs for 81 yards and a pair of touchdowns.

Stemmerich led the Wildcats in receiving with three grabs for 96 yards.