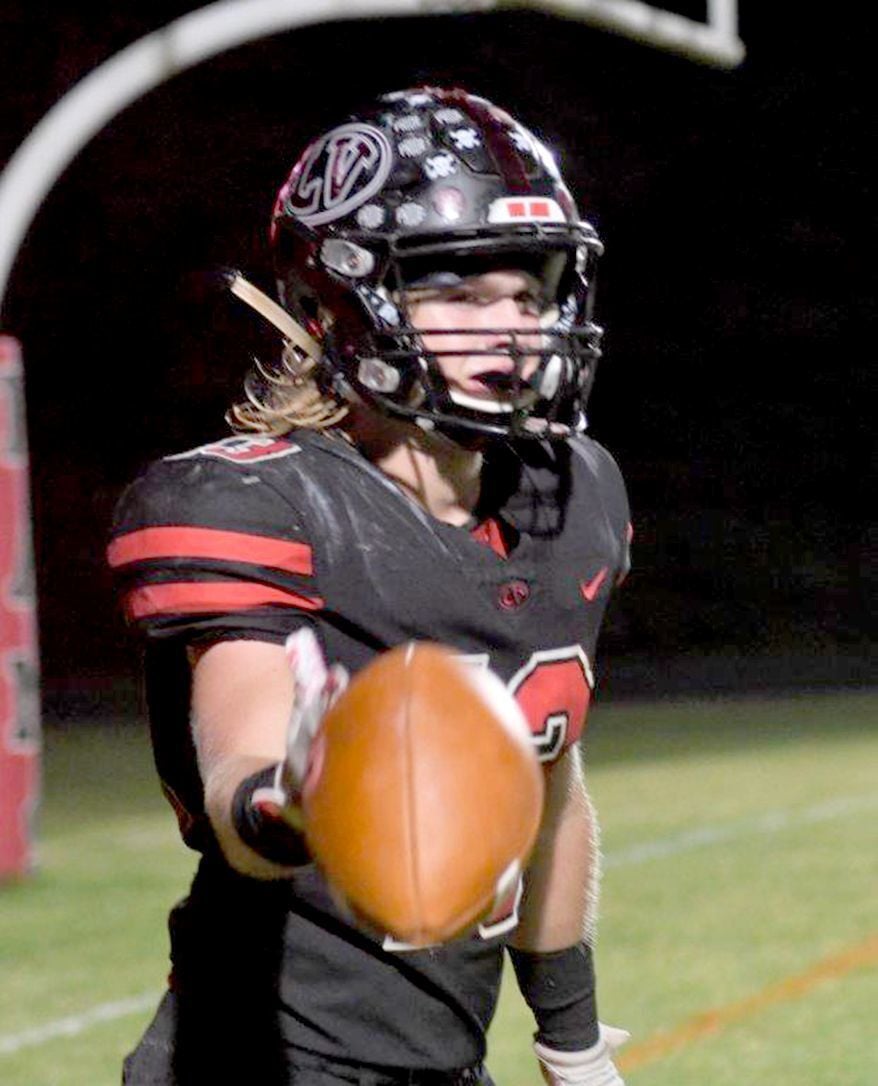 Ligonier Valley’s Grant Dowden hands the ball off after scoring a touchdown during a 62-12 rout of Carrick in a non-conference game Friday at Weller Field. Dowden scored on a 19-yard run, as he had 35 yards rushing on just two carries. 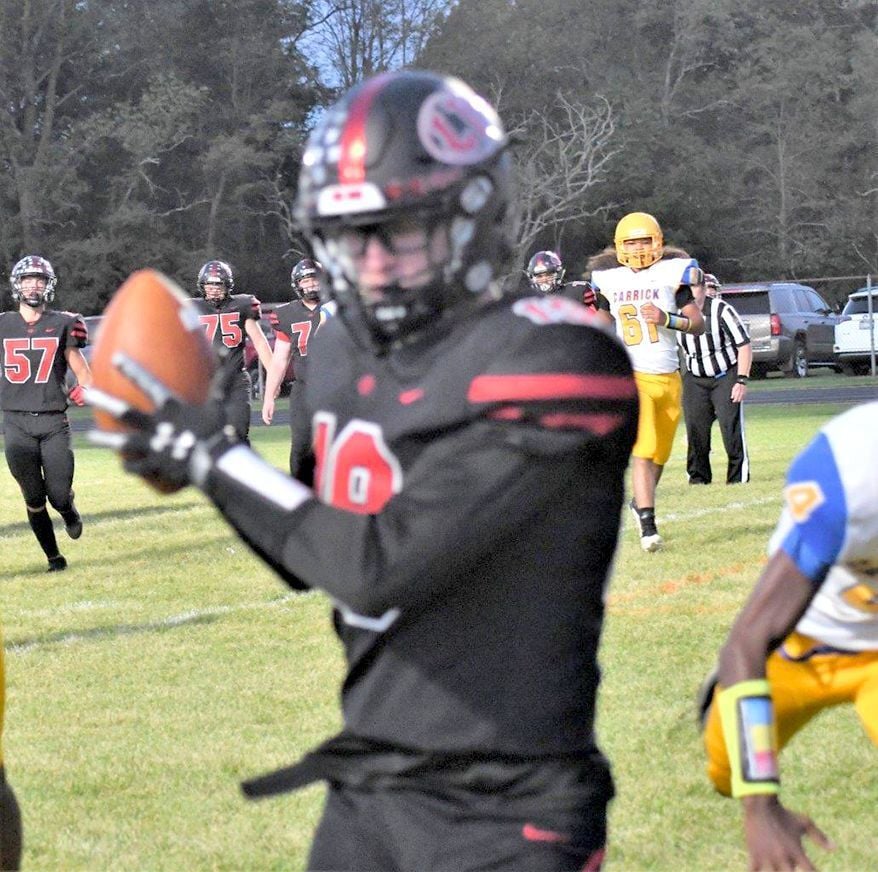 Ligonier Valley’s Matthew Marinchak concentrates in the end zone, as he hauls in a touchdown pass during a non-conference game against Carrick on Friday at Weller Field. Marinchak had just two catches for 13 yards, but they were both touchdowns, the first of the game for Ligonier Valley, which routed Carrick, 62-12. 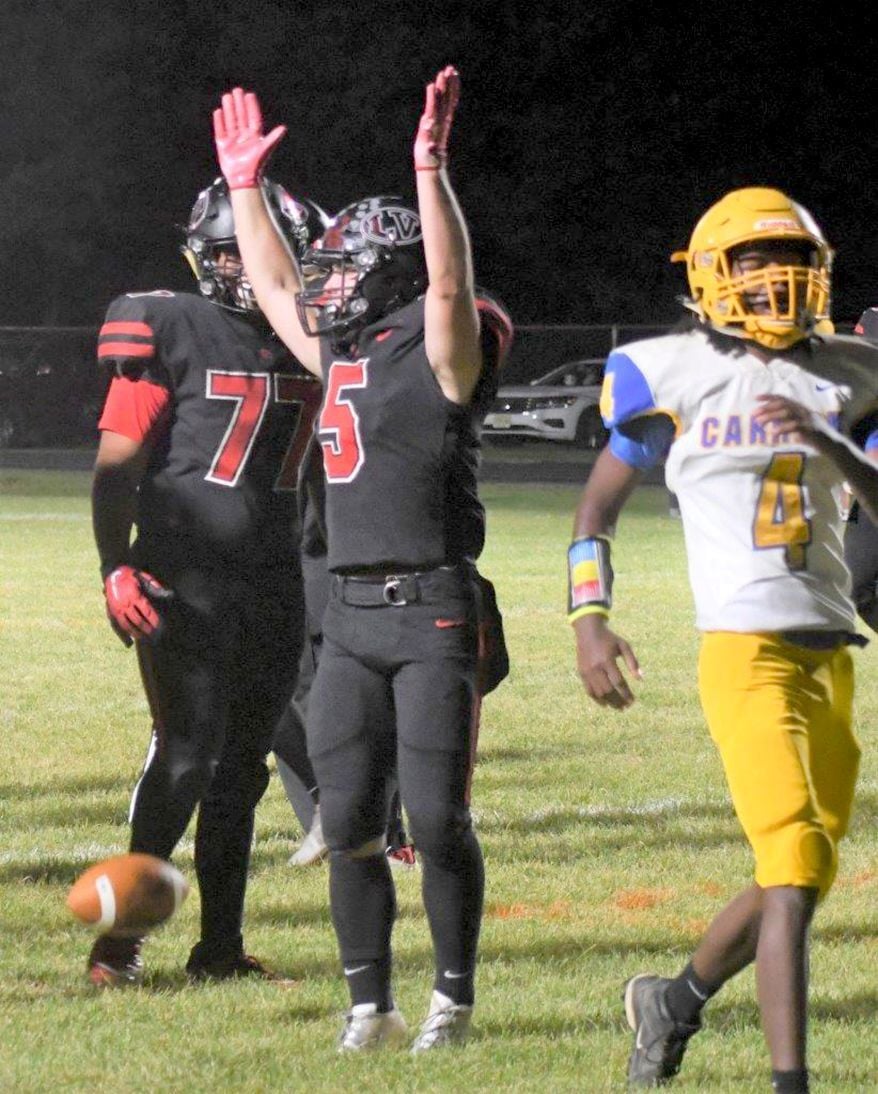 Ligonier Valley’s Grant Dowden hands the ball off after scoring a touchdown during a 62-12 rout of Carrick in a non-conference game Friday at Weller Field. Dowden scored on a 19-yard run, as he had 35 yards rushing on just two carries.

Ligonier Valley’s Matthew Marinchak concentrates in the end zone, as he hauls in a touchdown pass during a non-conference game against Carrick on Friday at Weller Field. Marinchak had just two catches for 13 yards, but they were both touchdowns, the first of the game for Ligonier Valley, which routed Carrick, 62-12.

The Ligonier Valley football team won big in its final non-conference game of the year, but it came with a price.

Ligonier Valley defeated Carrick, 62-12, on Friday at Weller Field, but the already-ailing Rams lost another key player to injury.

Senior defensive back, Ryan Harbert suffered an upper body injury in the first half and he did not return. The Rams were already without a pair of starters, quarterback Haden Sierocky and linebacker/tight end Miles Higgins. Sierocky the All-Conference quarterback, missed last week with a cast on his left arm, while Higgins sustained a leg injury a week ago and exited the field on crutches.

Add Harbert to the list on Friday against Carrick.

“We didn’t stay healthy unfortunately,” Ligonier Valley Coach Roger Beitel said. “Yet again we lost another guy, and it’s unbelievable, it has been happening every week.”

Despite the injury to Harbert, the Rams made history against Carrick.

Ligonier Valley stayed perfect, as the Rams upped their record to 5-0 overall. That broke a school record for consecutive non-losing seasons at seven. Ligonier Valley, playing its second season back in the WPIAL, previously set the mark for consecutive non-losing seasons at six in the abbreviated 2020 season, during the Rams’ first year back in the WPIAL. That surpassed the previous mark held twice by Beitel in addition to J.D. Jones.

The Rams broke the record on Friday against Carrick.

“Other than (the injuries) it was good effort by our kids,” Beitel said. “A lot of kids stepped up, and it’s the next man up mentality. But these first five victories have been extremely costly to us, in terms of losing quality players. Now we limp into conference play with not our best team, but it is what it is.”

The Ligonier Valley defense also helped the Rams to a 5-0 start and the trend continued on Friday against Carrick. The Rams had 15 tackles for loss and seven sacks on Friday, holding Carrick to just 37 total yards of offense.

Beitel was happy with the group.

“Those (defensive ends) we have, they are beasts,” Beitel said. “The ends apply a lot of pressure, and those guys have been playing really well. Our linebackers were really physical too, and our secondary is solid. We are still trying to find that right mix and moving forward we have to find the right guys.”

Senior defensive end Jacob Hay enjoyed a big night with two sacks and a pair of fumble recoveries. He took one of the pickups to the end zone for a 25-yard touchdown, which gave the Rams a 35-0 lead with 7:55 to play in the first half.

“How about Jacob Hay’s play tonight,” Beitel said with a smile on his face. “Jacob was a kid that started really strong last year for us and then kind of cooled off, so we hope he can continue to stay strong for us.”

Junior linebacker Jesse Turner had a big game, too. He had six tackles, including three for loss and two sacks. Juniors Billy Sugden and Bruce Kreiger had six tackles as well. Sugden had two tackles for loss.

“Those guys have been playing really well,” Beitel said. “(Sugden) has really emerged and he has been phenomenal for us.”

The game started 10 minutes later than the original 7 p.m. kick because the Carrick bus was stuck in traffic. The Rams started fast, though with 21 first-quarter points.

Backup quarterback Broderick Schreyer made his second straight start in place of Sierocky and he found Matthew Marinchak for a pair of early scores. The first was a six-yard grab, while Marinchak’s second touchdown was a seven-yarder, both followed by George Golden extra points.

After a defensive stop, Nick Beitel ran it in from seven yards out, his first of three scores, as Ligonier Valley took a three-touchdown lead.

Schreyer went 4-of-6 for 46 yards and two touchdowns. Beitel had nine carries for 122 yards and three touchdowns, while Marinchak caught a pair of scores.

It was much of the same in the second quarter. The Rams scored three more touchdowns and went into halftime with a 42-0 lead. Beitel scored his second touchdown from nine yards away and Golden kicked another extra point.

On the ensuing possession, Hay forced and then recovered his own fumble, taking it in for a 25-yard touchdown. After another defensive stop, Grant Dowden scored on a 19-yard run. Golden, who was a perfect 6-for-6, kicked his final extra point to make it 42-0 with 2:09 to play in the half.

Ligonier Valley fumbled the first play from scrimmage in the second half and Carrick capitalized. Brendan Patton-Smothers scooped up the fumble and scored a 45-yard touchdown to give Carrick its first points. The extra point was blocked, as Ligonier Valley held a 42-6 lead.

Beitel answered the Carrick score with his third rushing touchdown of the game. This one was a 49-yard run, followed by a successful extra point from backup kicker Hunter Carr, which increased the Ligonier Valley lead to 49-6.

Carrick scored another defensive touchdown. A Carrick defender hit the arm of Duncan Foust – Ligonier Valley’s backup quarterback behind Schreyer – while he was throwing and Patton-Smothers picked off the pass. He returned the interception 45 yards for his second touchdown of the game. The extra point was blocked again and Ligonier Valley held a 49-12 lead late in the third quarter.

Ligonier Valley responded 1:13 later. Foust orchestrated a scoring drive, capped off by his 3-yard rushing touchdown, and Carr’s extra point. Ligonier Valley’s John Jablunovsky scored the lone touchdown of the fourth quarter on a 13-yard run to complete the scoring.

The Rams seek to continue their undefeated season, as they start WPIAL Class 2A Allegheny Conference play, 7 p.m. Friday at Steel Valley. Steel Valley is also undefeated at a perfect 4-0, as the Ironmen routed Brentwood, 42-6, on Friday. Steel Valley has outscored the opposition 122-31 in four games with victories against Clairton, East Allegheny and Keystone Oaks, in addition to Friday’s blowout win.

The Rams had a blowout win of their own on Friday against Carrick.

“This game was a good opportunity to get a lot of guys to play,” Beitel said. “Our goal was to come in and get win, but to also come out healthy. So, obviously I am a little disappointed in that because we didn’t. It’s all about those kids and congratulations to those guys.”