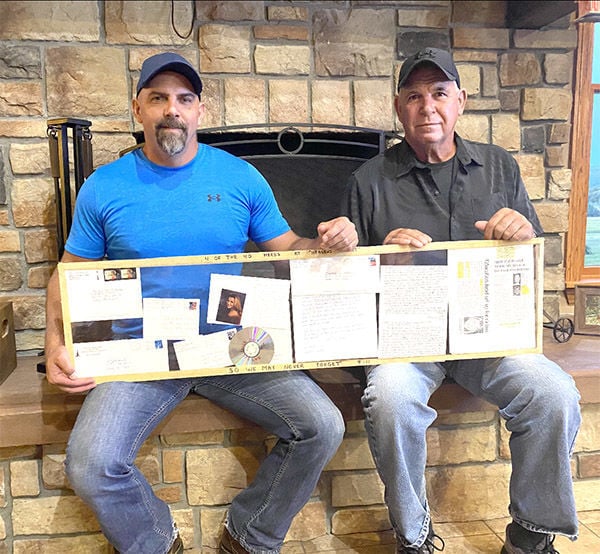 Wade and Ed Marts show off items they received, including a number of letters and photos of Flight 93 victims, after the father-son duo joined forces to write and record songs to honor the heroes of Flight 93. 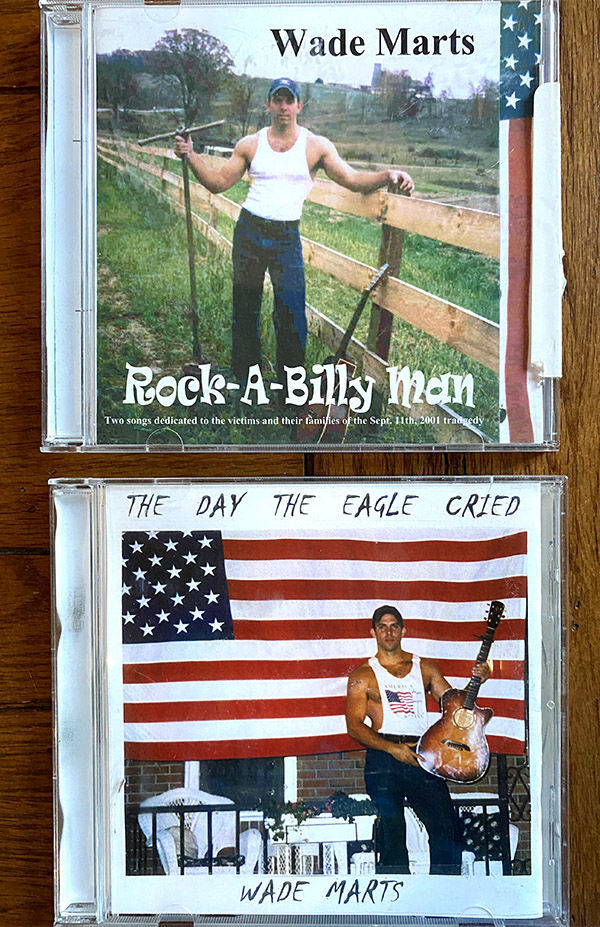 Ed Marts of Derry Township wrote a pair of songs in the aftermath of the 9/11 terrorist attacks that he shared with his son Wade, a musician who at the time played in the area.

Wade and Ed Marts show off items they received, including a number of letters and photos of Flight 93 victims, after the father-son duo joined forces to write and record songs to honor the heroes of Flight 93.

Ed Marts of Derry Township wrote a pair of songs in the aftermath of the 9/11 terrorist attacks that he shared with his son Wade, a musician who at the time played in the area.

Ed Marts of Derry Township was at work in a machine shop on Sept. 11, 2001, when people from the office came out to share the news about the beginnings of the terrorist attack on America.

First, two planes flew into the Twin Towers in the World Trade Center in New York City, then a plane slammed into the Pentagon.

United Flight 93 plunged down into a field near Shanksville in Someset County about an hour later. It was soon learned that the passengers had unsuccessfully tried to overpower the four hijackers and gain control of the plane. The 40 passengers and crew were killed instantly, along with the terrorists.

In the aftermath of those tragedies, Marts saw a picture of an eagle crying. The machine he was operating had a long running time on the project, so he started writing a song. And then there were two songs.

Marts plays guitar and, he told the Bulletin, every now and then he writes songs. These two came to him easily. The one he called “Heaven’s Airport” was about the people aboard Flight 93.

“The other one, ‘The Day the Eagle Cried,’ is sort of a revenge song about Osama bin Laden,” he said.

One of the lines warns, “You better hide.”

Marts showed his songs to his son Wade, a musician who at the time played out around the area. He asked him to record them so that they could get CDs of “Heaven’s Airport” to the families of the Flight 93 victims.

Wade Marts had the recording done within days. They sent the CDs to the Red Cross to forward to the victims’ loved ones, and four people responded back.

“Flight 93 was very close to home for us and it seemed as though it did not get as much media attention as the two planes that struck the towers,” Wade Marts said. “We both felt that they gave their lives to save others. We mailed the CDs to the families simply to let them know that their loved ones were not forgotten. We were surprised and honored to get responses back from four of them.”

On Thursday, the father and son got out those CDs to listen again, and looked again at the letters and photos that the families had sent. They came from California, Hawaii and Doylestown, Pennsylvania. Ed Marts stores them under Plexiglas and treasures them. It’s been 20 years, and he’s still touched by them.

“It was heart wrenching to see pictures of those young women,” his wife Nancy said. “One person sent us a two-page letter all about the woman who was aboard the plane.”

Wade Marts sings in a country style and laid all the musical tracks for the CDs. “Heaven’s Airport” begins with the passenger in Seat B5 calling home and saying that there are people on the plane with knives and bombs, and “it looks like the captain’s gone, from what I see, so me and some others are going to rush them. I’ll say goodbye, and say a prayer for me.”

The chorus is, “Dear God, we’re flying into Heaven’s Airport, 40 brave souls on board for you to see. They gave their lives so they could save some others. I’m an angel bringing in Flight 93.”

Ed Marts played the song at work and, he said, “It brought tears to a lot of people’s eyes.”

His son played the song at the one-year anniversary observance at The Palace Theatre in Greensburg.

“The announcer introduced me as a local musician who recorded a few patriotic songs about September 11th, and then I went out and sang in front of a packed theatre,” he said. “You could have heard a pin drop when I began singing about Flight 93 and when I was finished, there was a standing ovation. That moment meant a lot to me and I was honored to share it with everyone.”

Wade Marts donated some of his band cover charges, and they sold CDs and all together raised more than $3,500 to donate to a fund for the victims’ families.

Ed Marts was at the Flight 93 crash site before it was developed into a memorial.

“I have not been back,” he said. “I wanted to remember that place as it was when nothing else was put up”

Wade Marts has been there since it’s been developed.

“I’m glad that it will be there forever to remind people of what happened and also to honor those who lost their lives,” he said.

A year later the father and son wrote and recorded songs about the rescue in July 2002 at Quecreek Mine in Somerset County, where nine miners were trapped for 77 hours. The CDs they sold raised money for the Red Cross.

Wade Marts later landed a minor part in a documentary that was made about the mine disaster.