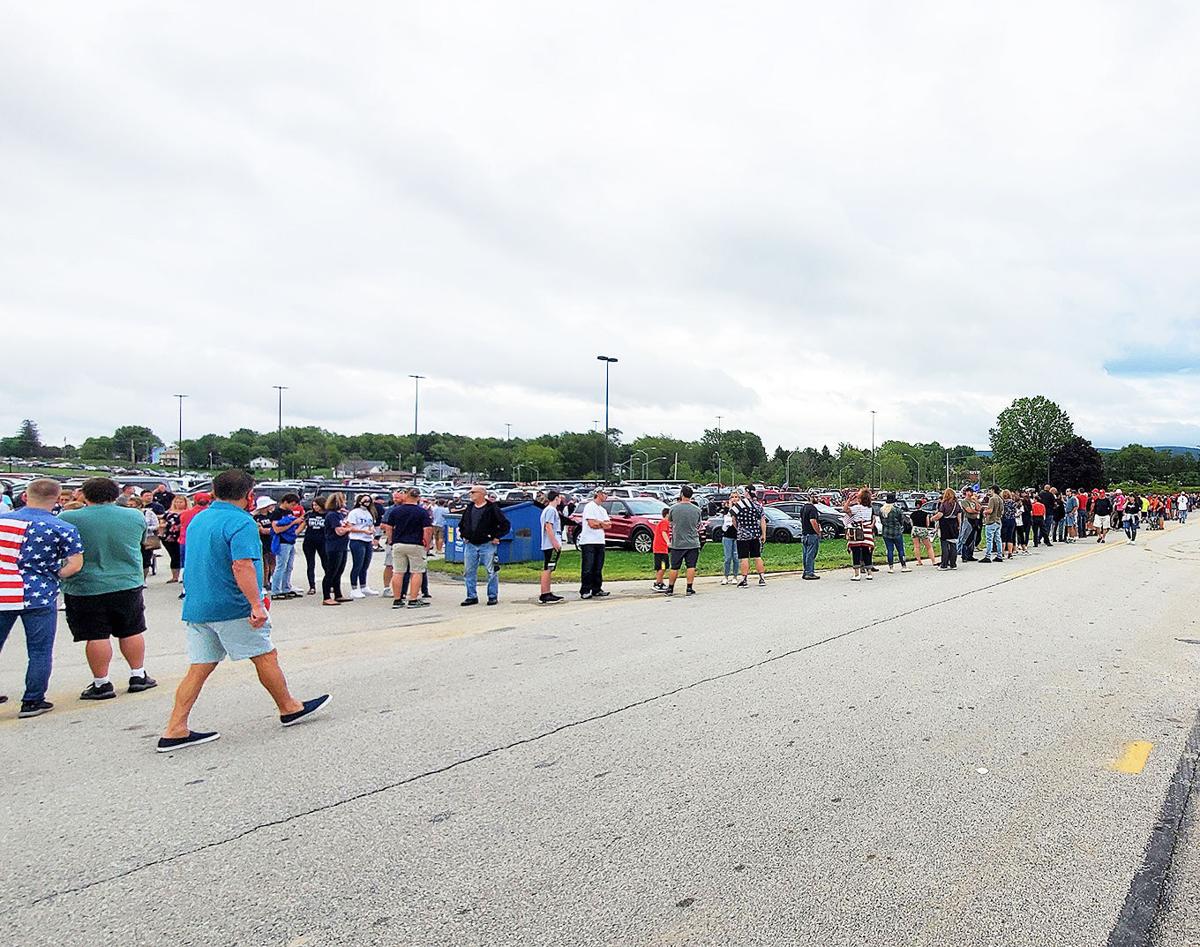 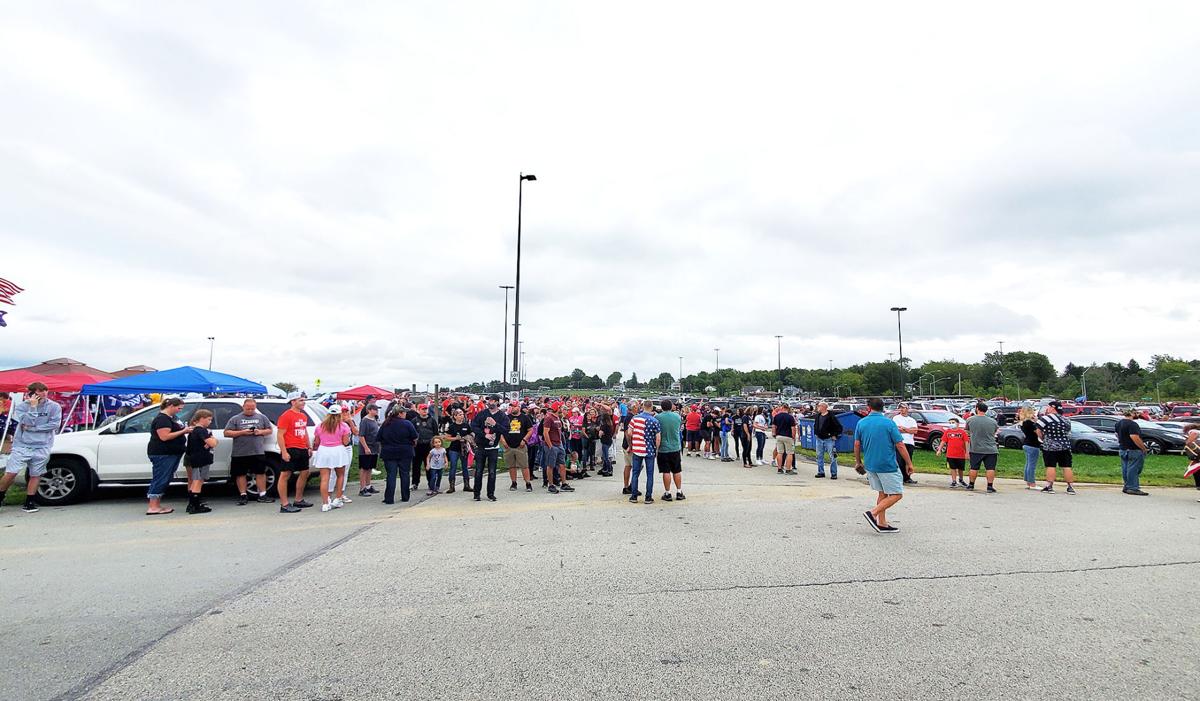 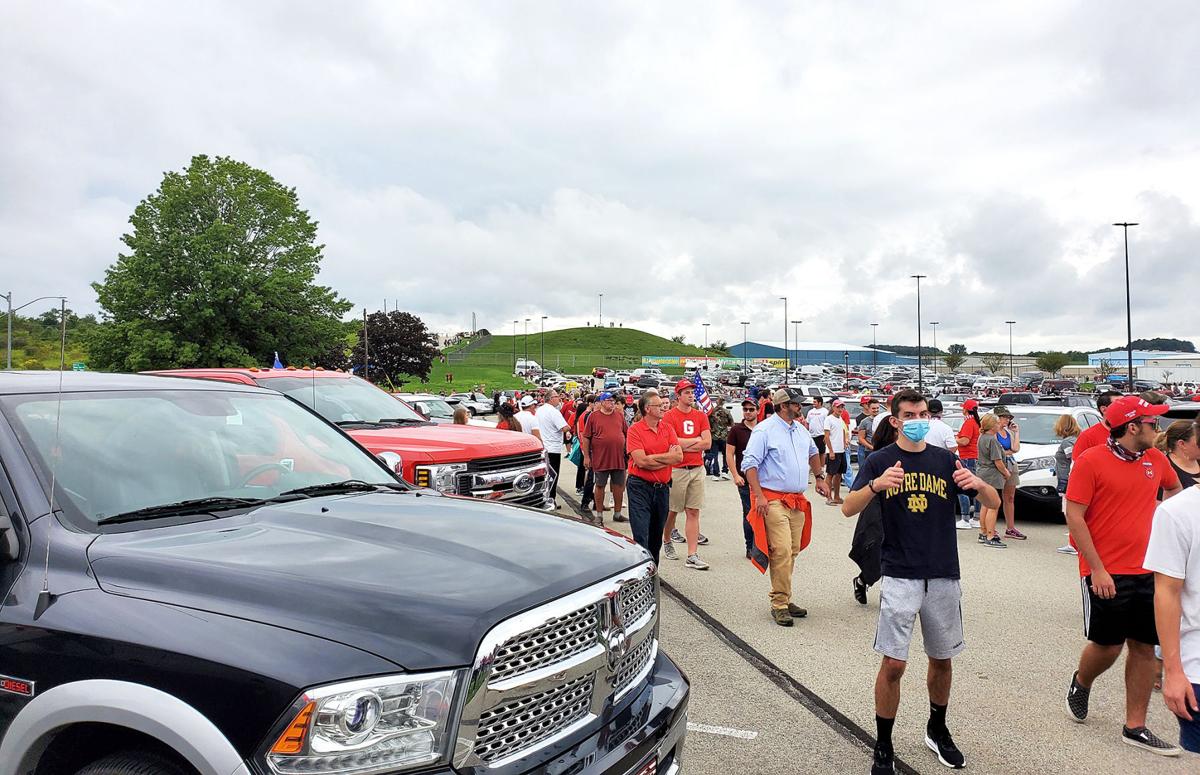 Marnell, who got to the airport around 5 a.m., said the suit signifies his “support for border barriers.”

“Sometimes (it’s) called the ‘wall suit,’ but really it’s just about president Trump’s strongest policies that I identify with, which are about America first,” Marnell said. “And part of that is having strong border control. I don’t support border walls as a tool to reduce immigration, I support its ability to reduce drug trafficking and human smuggling.”

Marnell said the president’s stop in Unity marked the 11th Trump rally that he’s been to. “All the rallies are a little bit different, and I’m here to hear whatever he has to say. I think he may go on the attack against Joe (Biden), and I think that’s warranted,” he said.

“Joe’s kind of hanging out in his basement lately, not really being responsive. And I think we’ll see some action on that front.”

Scores of Trump supporters waited in long lines snaking through the airport parking lots for shuttles to transport them to witness the president speak in-person or on a viewing screen outside a hangar at L.J. Aviation where Trump spoke shortly after 7 p.m.

Ken Toy of Kittanning was in the overflow area around 6 p.m., but decided to leave before Trump’s arrival.

Toy and his wife boarded a shuttle from the overflow crowd area back to the parking lot around 6 p.m. to head back to Kittanning. They were unable to enter the hangar to see Trump speak in-person.

They arrived at the airport at 3 o’clock. He said he was “not disappointed” that he was unable to hear the president speak in person.

“I enjoy supporting Trump in any way I can. Since we got here hours ago, all we’ve been around is positive people,” Toy said.

Many more supporters parked along Route 981 to watch Trump’s aircraft fly into the airport from their parked cars, setting up lawn chairs to witness the event.

Sam and Carol Windows drove from McDonald with the sole intention of seeing Trump’s aircraft land. They sat in lawn chairs in Parking Lot C at the airport to view the landing.

“If that plane comes through those clouds right there,” Windows said, pointing in the direction from which Trump’s aircraft arrived, “I’ll be in this car and out that gate in a minute.”

Supporters inside the hangar where the president spoke purchased merchandise such as “Make America Great Again” hats and “Peaceful Protester” shirts before Trump’s arrival.

A family from Brookville purchased Trump-themed gear to wear during the president’s campaign stop.

“We love President Trump,” said Andrea Shaffer of Brookville. “We’re out here to support the best president in the history of the United States.”

Shaffer said she and her family were “very excited” to wear their newly-purchased merchandise. Shaffer said it’s her first time seeing Trump, adding that she attended Vice President Mike Pence’s “Cops for Trump” rally in Greensburg on July 30.

One Trump supporter, Ron Jurysta, came to see the “spectacle of it all.”

“He’s doing great things for America, and I just wanted to be a part of that,” Jurysta of Butler said.

John Demby of Leechburg said he had been to a previous Trump rally in Erie, but it was his first time seeing President Trump.

Ahead of hearing the president speak in person Thursday, Demby said, “I’m sure he’s going to talk about what he always does, ‘Making America great again.’ It’s not a statement; it’s what he’s done.”

During his speech, the president voiced his support for the police and law and order.

“I’ve been a Trump supporter from the beginning,” said Jeff Mollohan, who had just purchased two “Make America Great Again” hats from a vendor inside the L.J. Aviation hangar.

Mollohan, who’s from Derry but lives in Cranberry Township, said he supports Trump because “he’s for law and order, and the original way of American life.”

Likewise, Kim Jacobs of Mount Pleasant said she supports Trump because he is vocal about preserving law and order in the United States.

“He wants law and order, and so do I. Our cities are being burned down,” Jacobs said. “We live right here... we’re not seeing it. And people will say to me, ‘Why do you care about it?’ And I say, “That’s my city. This is my country. And I’m tired of it.”

Jacobs said she’s a lifelong Republican and that Thursday was the first time she’d seen a president in person.

“I’m more interested in this election, and the last election, than I’ve ever been,” she said. “He supports the middle class. (Trump) is for the working man. He says what he means, and means what he says. He made promises and he kept them.”

Richard March, a Greater Latrobe High School graduate, said it was his first time seeing Trump at a rally, as well.

“It’s great to see a president up close and personal; I have never done it before,” he said. “I never voted for anyone until Trump. It’s just the realization of the moment, to see the president up front.”

March, who lives in North Hills, was looking forward to hearing the president talk about jobs, the economy and anti-corruption.

“There’s so many things. I like when he talks about the economy and jobs... that affects everybody,” March said. “And the fact that he’s not a politician and he speaks his mind.”

Debbie and Dale Anderson of Penn Hills and Pat Giles of Plum Borough said they planned on seeing Trump speak in person, but were unable due to backed-up traffic entering the airport.

They parked along Route 982 and walked about two miles to watch Trump’s aircraft land from the parking lot. It didn’t put a damper on their evening, however.

“We walked two miles because we wanted to be here to see the president,” Debbie Anderson said. “...We are so glad to come and support our president, even if we didn’t get in.”

A few anti-Trump supporters were walking near the roundabout on Route 981 near the airport during the president’s speech around 7:30 p.m.

Sydney of Scottdale, who did not provide her last name, carried two signs — one which read “Black Lives Matter” and “Say their names,” and another saying, “No Trump. No KKK. No Facist USA.” She said she came out to the airport to show that “just one person can make a difference.”

As traffic was backed up along Route 981, a truck sponsored by Move On Political Action displayed an electronic sign criticizing the president’s response to the COVID-19 pandemic by listing the number of coronavirus cases and deaths in Pennsylvania above a Trump quote which states, “I don’t take responsibility at all.”

According to its website, MoveOn.org Political Action is, “A federal political action committee (PAC) which primarily helps members elect candidates who reflect our member’s values through a variety of activities aimed at influencing the outcome of elections. We are focused on running powerful progressive advocacy campaigns and demonstrating MoveOn members’ power at the ballot box.”

“We commissioned a mobile billboard today to not let Trump off the hook for his lies. We can’t let Trump parade around the country without holding him accountable for what he’s done,” Rahna Epting, Executive Director of MoveOn Political Action, said in a statement. “This pandemic has fundamentally changed our society, from daily life to public opinion. We need a president who will reflect those changes, instead of someone who has built an entire platform on living in the past.”

“When President Trump speaks in Westmoreland County today, you almost certainly won’t hear him take responsibility for the economic hardship his presidency has caused Pennsylvanians. President Trump’s mishandling of the economy and the coronavirus pandemic has caused millions of people across the Commonwealth to file for unemployment since March, has led to a staggering unemployment rate of 13.5% in Westmoreland County, and caused nearly 8,000 Pennsylvanians to lose their lives from the virus,” Biden said. “But even before this crisis began, President Trump’s reckless economic policies and tariff wars shipped jobs overseas and lined the pockets of CEOs, while leaving Western Pennsylvania workers and families behind. Wall Street didn’t build this country, the middle class built this country. As President, I will fight for hardworking Pennsylvanians, bring our economy back from the brink, and create good-paying, manufacturing and union jobs.”

“In 2016, whenever the president was campaigning for office the first time, he made big promises. He promised to bring back jobs. He promised to raise wages. [But] even before coronavirus even hit our shores, half of Americans were living paycheck to paycheck worrying every single day if they were going to be able to pay their bills,” Cerilli said.

“And you don’t have to look any further than Trump’s tax scam to realize Trump doesn’t care about the working middle class and unions. Trump only cares about his wealthy friends and donors. He created loopholes, which rewarded corporations from moving their operations and assets overseas. He made it easier, not harder, to outsource Pennsylvania jobs. And let’s not forget to mention the failed trade war with China.”

“No matter where you go [in Pennsylvania], you’re going to be in a county which has — if not a record high level of unemployment — very close to a record,” Casey said. “We haven’t seen unemployment like this since the early 1980s. Even during the last recession of a decade ago, the unemployment rate did not go as high as it is now….

As far as the Democrats stating Westmoreland County unemployment is higher than its ever been. Well look at our Governor who shut down businesses forcing furloughs. Oh yeah, is he not a Democrat?

Sorry, there are no recent results for popular articles.

Sorry, there are no recent results for popular images.