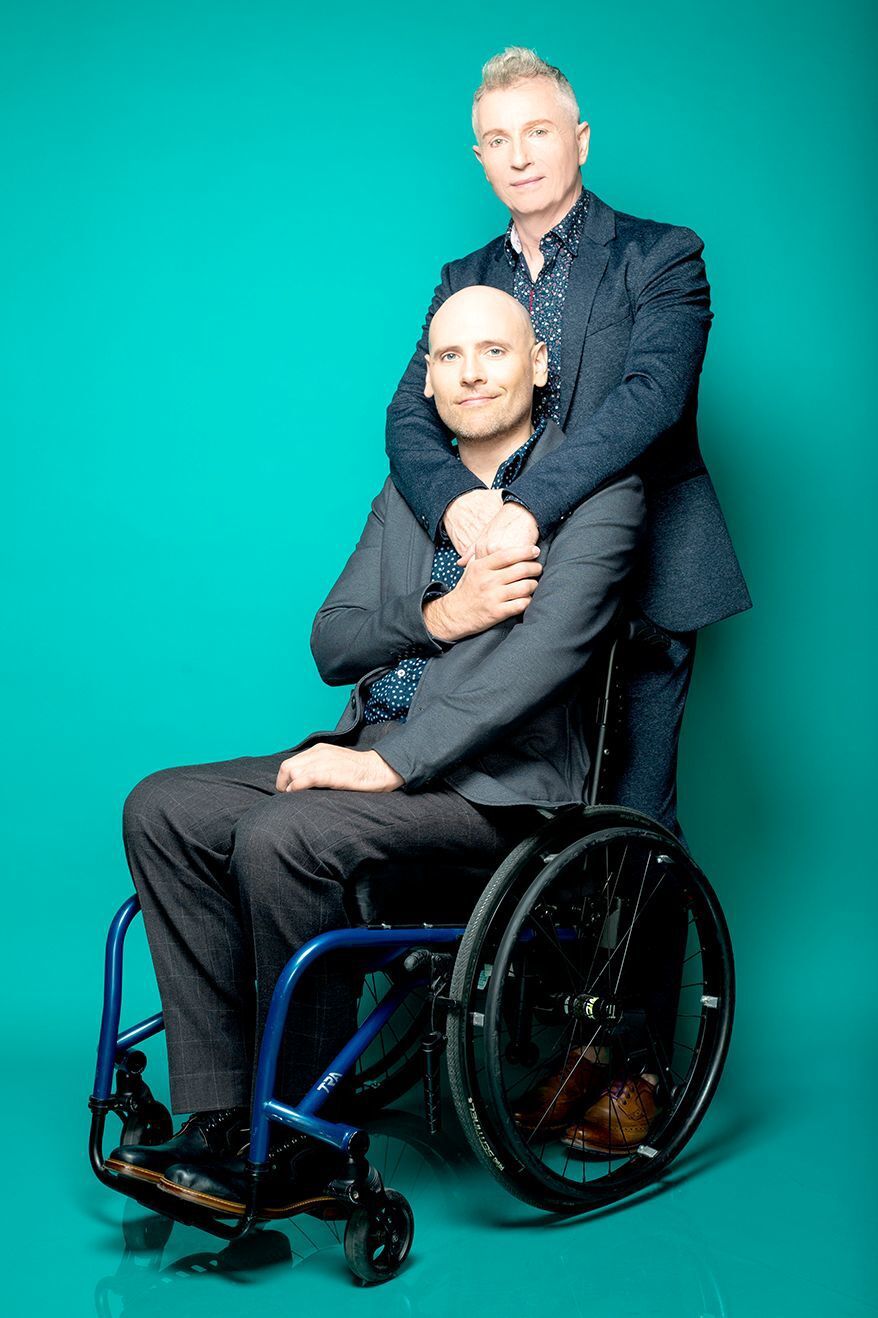 Unity Township native and former Broadway star Jerad Bortz (left) and his partner Steven Skeels were involved in a car crash in February 2018 that left Bortz in a wheelchair. Skeels recently wrote 22 original songs for a benefit album, “THANKFUL: An Album for Jerad Bortz,” to help raise funds for his partner’s ongoing medical expenses. 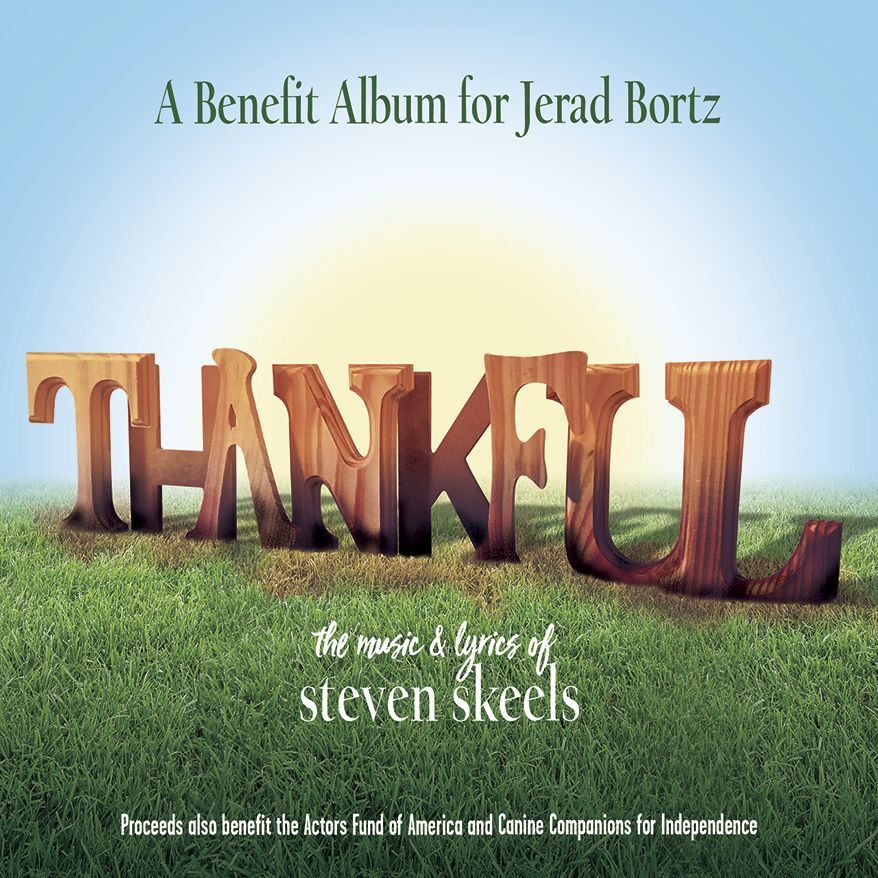 The album is available on Apple Music, Amazon and Spotify.

Unity Township native and former Broadway star Jerad Bortz (left) and his partner Steven Skeels were involved in a car crash in February 2018 that left Bortz in a wheelchair. Skeels recently wrote 22 original songs for a benefit album, “THANKFUL: An Album for Jerad Bortz,” to help raise funds for his partner’s ongoing medical expenses.

The album is available on Apple Music, Amazon and Spotify.

“I’m so thankful for this life and all it brings,” powerfully sings Unity Township native and former Broadway star Jerad Bortz on the closing track of a new album co-produced by his husband, Steven Skeels.

Bortz’s acting career was upended after he was involved in a car crash nearly three years ago, leaving him paralyzed from the chest down and Skeels badly injured. Bortz sustained a cervical spinal cord injury, while Skeels suffered a sprained wrist and concussion during the crash in February 2018.

“There’s still a lot of things in our lives that we are still figuring out, even almost after three years,” Bortz said. “There’s a huge learning curve to this new life we find ourselves in.”

For Bortz, that includes rehabilitation and adjusting to life in a wheelchair.

So, the couple who currently resides in New York City has decided to give back with, “THANKFUL: An Album for Jerad Bortz,” which includes 22 original songs written by singer, songwriter Skeels, featuring a lineup of award-winning singers, arrangers, orchestrators and musicians.

Album sales aim to help raise funds for Bortz’s ongoing medical needs, and a portion of proceeds will go to The Actors Fund of America and Canine Companions for Independence (CCI) — two organizations that supported Bortz after the accident.

And just like the theme of the closing track, “Thankful,” the album has provided the Bortz and Skeels with a renewed reason to be grateful for life.

“A big part of our relationship is collaborating on different projects. So, there was something about this album that felt like our normal life, as opposed to everything we were facing because of the accident that was anything but normal,” Bortz said. “The album gave us a sense of normalcy and something to focus on that wasn’t just this traumatic thing to happen to us.”

For Jerad’s mother, Beverly Bortz, the album “encapsulates everything. They are still here, they are thankful for each day.”

“Working on the album has been healing in so many ways,” added Skeels in a press release. “I’m so proud of what we were able to create and for the generosity of so many artists.”

The album was co-produced by Lynn Pinto and was recorded prior to the coronavirus pandemic. It features the best of Broadway including Stephanie J. Block, Shoshana Bean, Ben Vereen and more.

Bortz suggested to Skeels they enlist Pinto to help produce the album with the extensive connections she has within New York’s theater community.

“Pinto was where it really took off,” Bortz said. “She funded the whole venture. All the artists donated their time. We still had to pay for the studios.”

The album was recorded by February, taking just over a year to complete. It was released Nov. 27 and is available on Apple Music, Spotify and Amazon, or if you’d like a hard copy you can email Bortz and Skeels at Thankfulbenefitalbum@gmail.com.

“On each track, there are one or two vocalists. But there’s anywhere from four to 14 musicians that played on each track,” Bortz said. “The time the musicians gave to us was hugely instrumental, and (Pinto) was a big part of pulling those musicians in.”

Bortz grew up in the Lawson Heights neighborhood of Unity Township and graduated from Greater Latrobe Senior High School in 1997. He got involved in theater during junior high, participating in Greensburg Civic Theatre’s Greasepaint Players and Laurel Ballet. He also performed at Idlewild and Soakzone’s Hillside Theater and Diamond Theatre of Ligonier, in addition to Greater Latrobe’s theater groups.

His only job outside of theater, Bortz believes, was as a Bulletin paper carrier in high school.

It’s only fitting that he delivered newspapers on...Theatre Street.

Bortz attended Ithaca College in New York, graduating in 2001 with a Bachelor of Fine Arts in musical theater.

He starred in the cast of “Wicked” for more than 12 years, and made his Broadway debut in “Mamma Mia!” in June 2002. Skeels has starred in Andrew Lloyd Webber’s “Starlight Express.”

Not only does Bortz hope the album raises money, “But beyond that raise awareness, as well. I’m still new to this world, but as much as I can shine a light on spinal cord injury and disability in general (the better).”

“Spinal cord injuries really are like snowflakes. … Depending on how severely it was hit, what direction it was hit, which side of it was hit — it can be totally different from person to person,” he said.

Following a show at “Wicked,” Bortz and Skeels were involved in the crash which occurred along Interstate 80 as the couple was en route to their cabin in the Pocono Mountains.

“I only got one day off a week, and I really needed to make that day off feel like a vacation every week, because I worked so hard in the city during those six days,” Bortz said. “We routinely headed to that home before the car accident happened.”

Bortz was transferred to a trauma center in Allentown for surgery, and a few days after the crash to the Kessler Institute for Spinal Research and Rehabilitation in New Jersey where his doctor echoed the surgeon’s assessment that he will be wheelchair-bound for life. He currently does outpatient therapy in New York City.

But each day in his Big Apple apartment, Bortz perseveres, “Trying to be brave and push myself to see how far I can push my new body, my new physicality,” he said.

His mother, Beverly, calls him an inspiration — and his ability to still sing: “A miracle.”

She recalled when Jerad performed at a school in which many children were also wheelchair-bound.

“He has no idea the ripple effect he has on people. After he sang, he got calls from faculty and parents saying, ‘You have no idea what impact that you had on my child — that there’s hope that we can continue,” she said.

The couple sings on the benefit album’s closing track, “I’m amazed. I am grateful. I feel love, and I feel joy. I’m in awe, and I’m so thankful for this life and all it brings.”