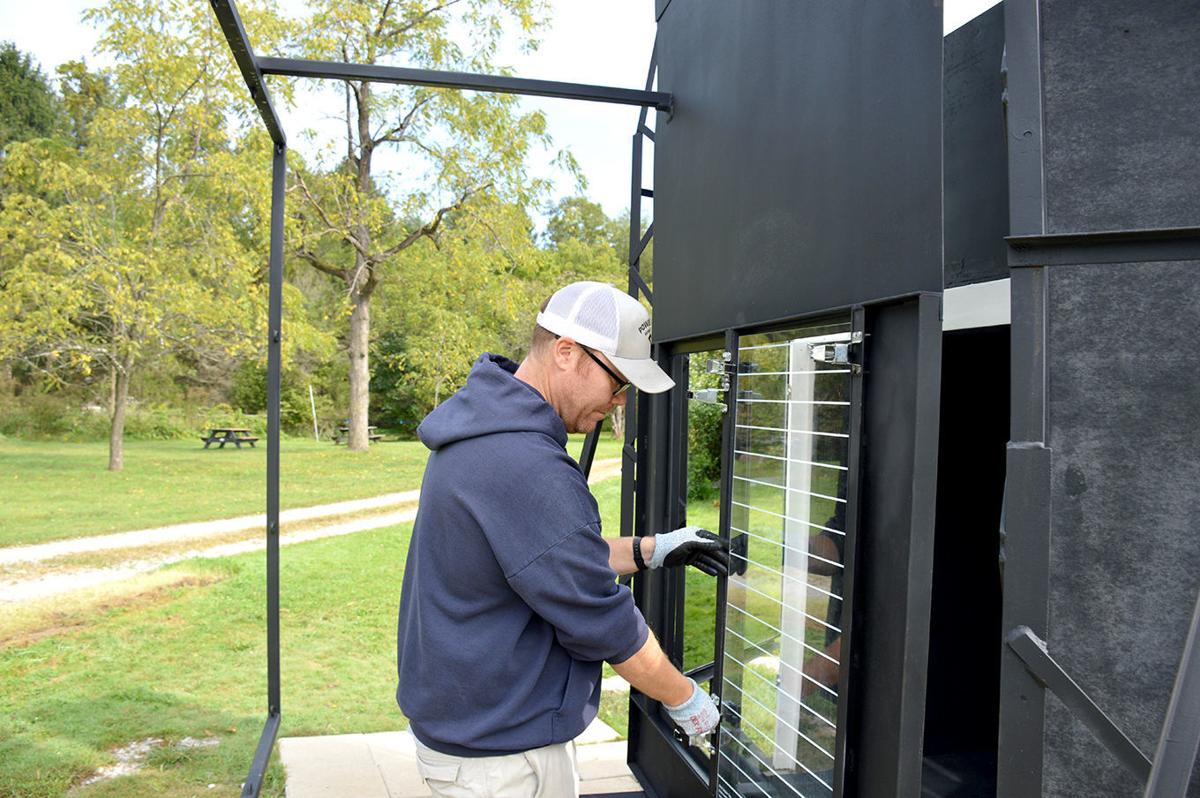 Luke DeGroote, avian research coordinator at the Powdermill Nature Reserve in Cook Township, puts a patterned piece of glass into a tunnel. Researchers are tracking which pieces of glass birds in the tunnel avoid in hopes of reducing glass collisions, the second-leading cause of early deaths in birds. 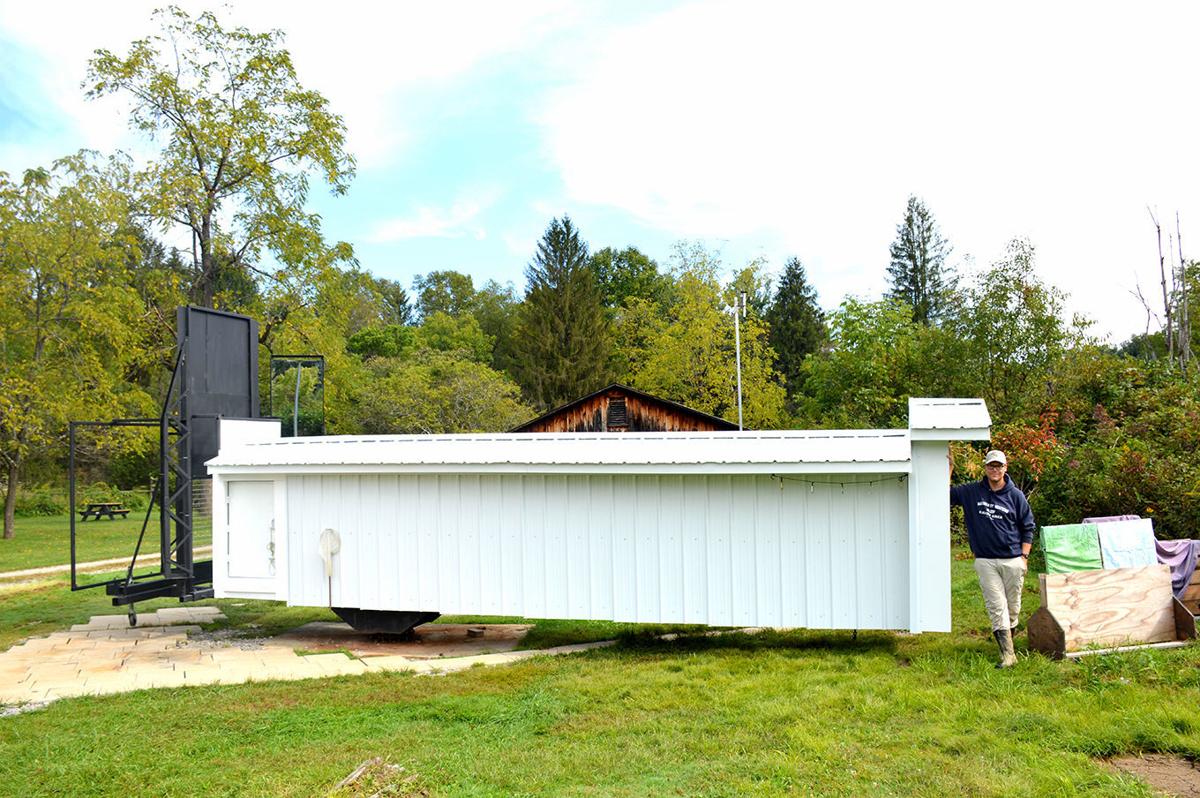 Luke DeGroote, avian research coordinator at the Powdermill Nature Reserve in Cook Township, puts a patterned piece of glass into a tunnel. Researchers are tracking which pieces of glass birds in the tunnel avoid in hopes of reducing glass collisions, the second-leading cause of early deaths in birds.

There are many reasons why birds die before their short natural life spans are up. They get hit on the road, fly into cell phone towers and windmills, get eaten by predators and every year in the United States, an estimated 1.5 to 3 billion birds are killed by cats.

Glass collision—when birds fly into windows—is the second-leading cause of their early demise, and the staff at Powdermill Nature Reserve in Rector is researching solutions to cutting down those numbers.

The project is a partnership with American Bird Conservancy (ABC) based in New York City.

Luke DeGroote, avian research coordinator at Powdermill, oversees the operations on the reserve.

“There are 300 million to a billion — and probably closer to a billion — of those incidents just in the United States every year,” said Dr. Christine Sheppard, director of ABC’s glass collisions program.

The research goal is to determine if coated glass or windows fitted with patterns will deter birds from flying into reflected images. And what better way to conduct the research than to turn the project over to people who literally have their hands on hundreds of song birds a day during fall and spring migrations?

That’s how the project ended up at Powdermill, which is operated under Carnegie Museums of Natural History in Pittsburgh.

Local and migrating song birds that stop over at the reserve are caught in fine nets that are nearly invisible to them. The staff removes them from the nets, examines them for weight, health and other characteristics that they record, then put tiny bands on their legs that will help to track them if they’re caught again.

The collision project added another step to the research.

“We get from 100 to 250 birds a day on average in the fall migration and about two thirds of them go through the tunnel,” DeGroote said.

The 25-foot tunnel is a simple structure that has samples of glass at the end. Birds are put into the other end and are observed to see if they will fly towards certain panels of glass — which are protected by nets — or avoid them. They are released when they get to the end of the tunnel.

“The goal of the project is to find affordable glass and window films that can be easily put up so that birds will see it and therefore not die,” DeGroote said.

The project began in 2008 after ABC became aware of the magnitude of birds being killed by colliding with windows. There was an initial one-year grant, then additional funding to partner with Powdermill.

“I was interested in doing this for a couple of reasons,” Sheppard said. “One was to get people to build bird-friendly buildings. I was managing a monitoring program for a new building that was designed to incorporate a lot of bird friendly gestures, but the problem I discovered was that most of the things didn’t work.”

Many cities across the country have volunteers who keep track of collision fatalities by picking up dead birds.

“Volunteers from Bird Safe Pittsburgh travel around downtown and in other commercial areas looking for birds that hit windows so that we can understand where they hit and how many are dying,” DeGroote said. “Some cities have more dead birds than others. Volunteers in Cleveland found 3,000 dead birds last year, and I think we found 3,000 in five years in Pittsburgh. Cleveland has a higher count because they are along the lake shore and when birds are migrating, they are flying all night long and then looking for some place to land and stop and refill. If they’re traveling across Ohio and day is breaking, they’re going to fly towards land if they’re over Lake Erie.”

They’re looking for green urban parks and unfortunately, thousands of them crash into buildings instead.

“Pittsburgh has a lot of green areas in the city, and we are very forested in suburban areas,” DeGroote said. “So we have more options for the birds.”

In residential collisions, birds who land in backyards might fly into a window when they take off, especially if the reflecting window gives the illusion that it’s just another part of the backyard. The incidents are even higher if a feeder is located too close to windows.

The research will be applied to developing bird friendly glass for new or replacement installations. Meanwhile, there are a number of films on the market that can be applied to windows to help prevent bird collisions. There are patterned films that can be left on, and films that can be pressed on and removed, leaving behind patterns that birds can see. People can even paint patterns with removable tempera paints.

“Right now the project is open ended and we still have a lot of questions,” DeGroote said. “We know that vertical and horizontal lines work, but how does diagonal work? What about UV spectrum and UV patterns? We are analyzing the data and coming up with different questions. If we can understand by looking at the pieces of glass that the birds are avoiding, if we come up with a general trend, we can provide recommendations to glass manufacturers.”

Birds have an important role in the overall environment. They eat insects, pollinate certain plants and disseminate seeds that generate new plant growth. They are both predators and prey on the food chain.

“There’s a lot of economic value on birds, too, with the tremendous amount of money that people spend,” DeGroote said. “They buy bird seed and feeding supplies, binoculars and cameras and many people travel all over the country for bird watching. But beyond being a reason to spend money, birds are interesting and they enrich our lives.”