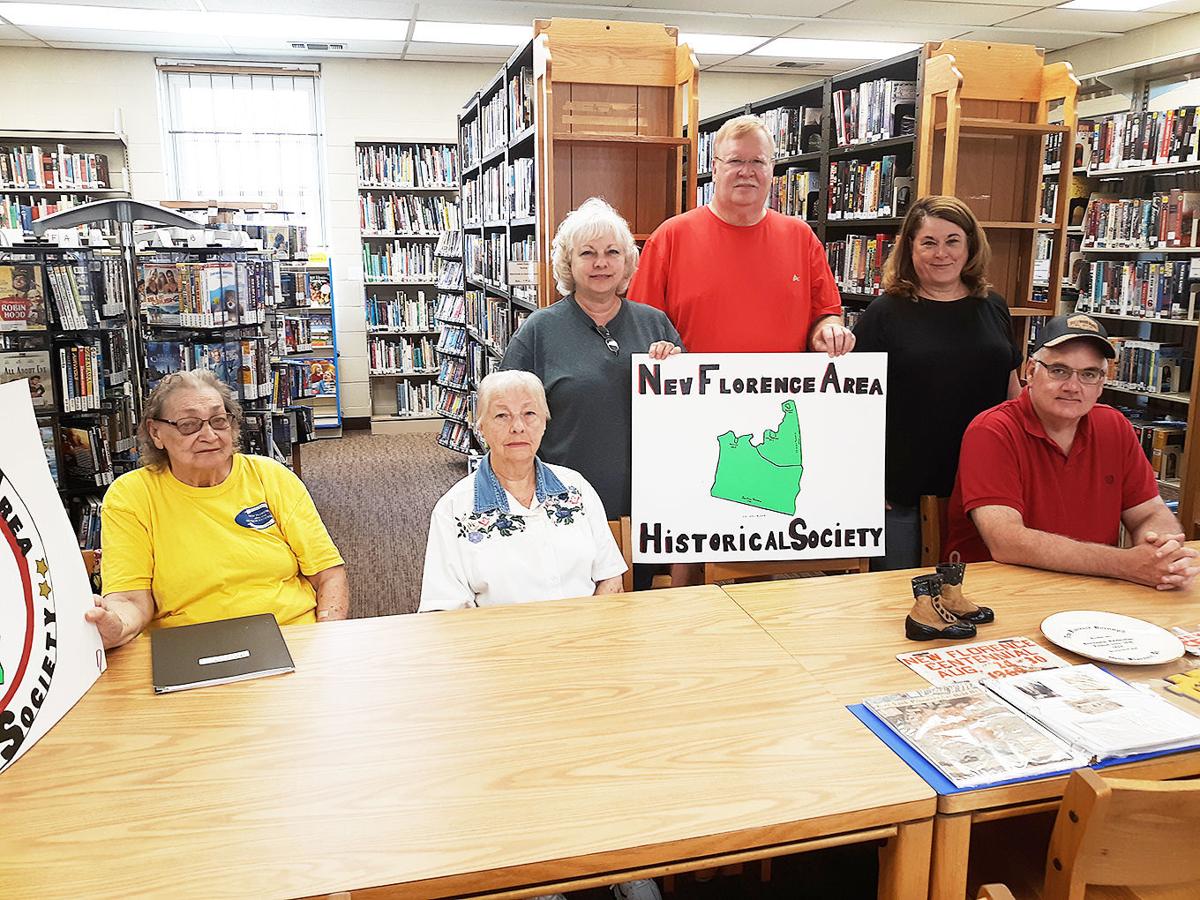 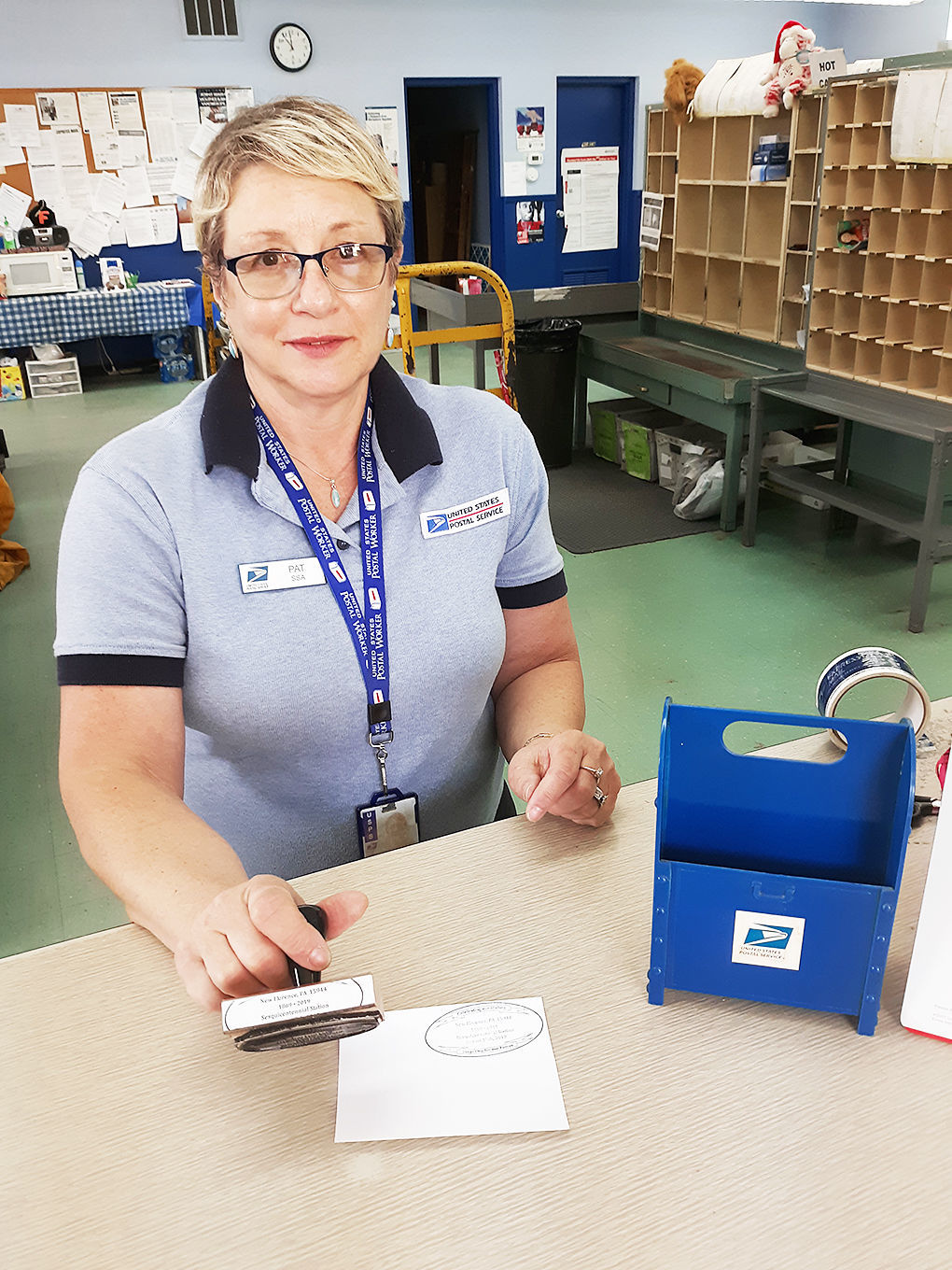 New Florence postal clerk Pat O’Shell inks a copy of the cancellation stamp made for the 150th anniversary celebration. Visitors may have the special stamp placed on all mail sent out on Aug. 17. 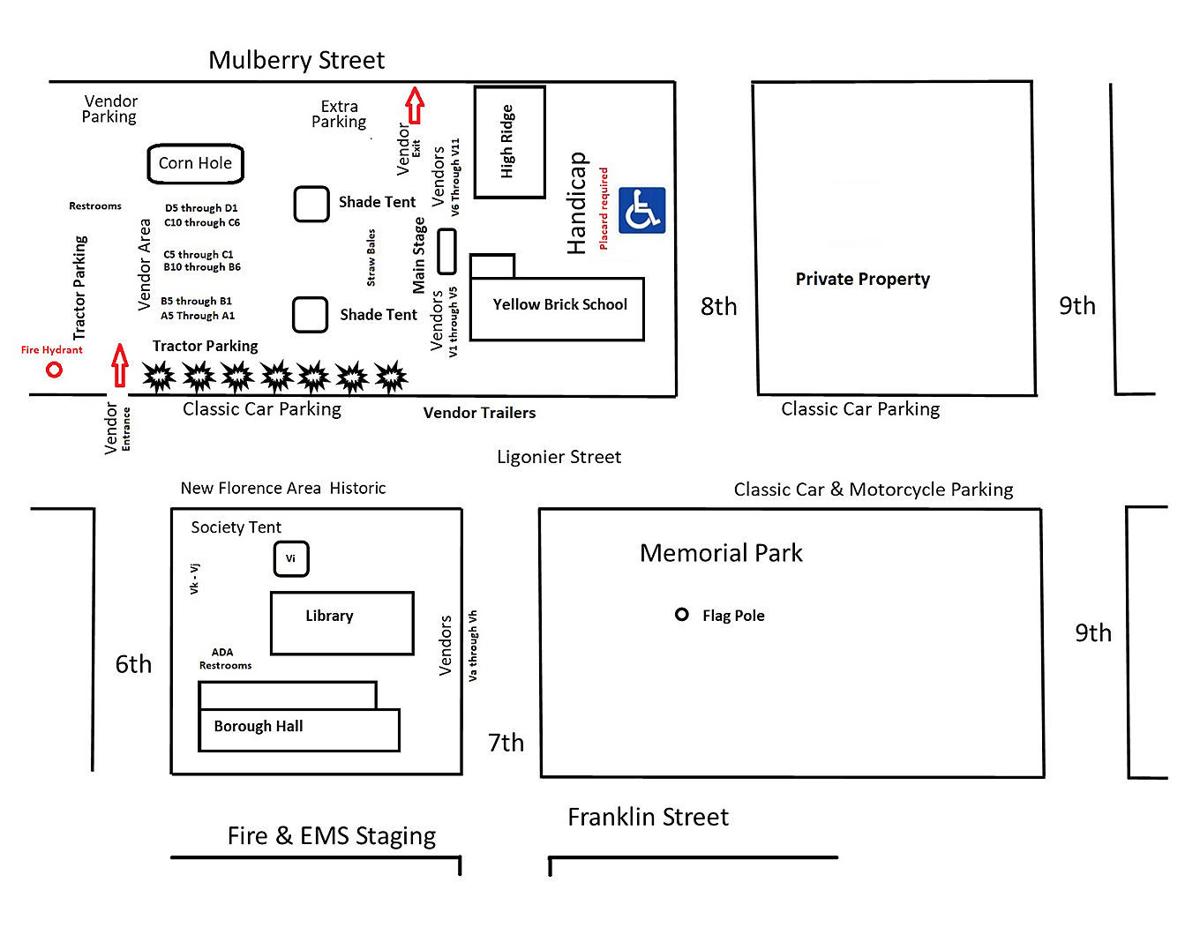 New Florence postal clerk Pat O’Shell inks a copy of the cancellation stamp made for the 150th anniversary celebration. Visitors may have the special stamp placed on all mail sent out on Aug. 17.

The newly formed New Florence Historical Society will take on a major milestone when it leads a celebration for the borough’s sesquicentennial this weekend. On Saturday, Aug. 17, New Florence will mark its 150th anniversary with a full lineup of activities and entertainment.

“We started the historical society last April. That is when we realized that it was going to be our sesquicentennial this year,” said Kathy Mack, president of the society.

Most of the members of the committee were young children when the borough celebrated its centennial in 1969.

“I remember the ladies wearing period dress and the men grew their beards for the event,” said committee member Richard Stuart.

“You only get to live life once, but you will only witness at least two events like this,” said committee member Todd Gable. “We all were here for the 1969 event and now we are here for the 150th event.”

The historical society was started by a group of citizens with an interest in the history of the area.

‘We decided we needed to do something to preserve the artifacts and the knowledge that is soon going to be done with all of our senior citizens,” said Mack. “In my auction business, I see a lot of things being thrown away. It was really getting to me. I knew others in the community were interested in the history and I contact them about starting an historical society.”

Mack said people have been enthusiastic and generous about offering items or information because they would like to see their family history reserved. Items include a letter from a prisoner of war, a Civil War diary from a Bolivar solider, a pair of children’s shoes from a store in Lockport, and a newspaper clipping and a 24-page newspaper insert from the 100th anniversary.

“If I am at an auction preview and I just mention that we are trying to do something in town for the 150th anniversary, they offer items to take for the event,” Mack said.

A historical display tent will be set up in front of New Florence Community Library displaying the many artifacts already collected by the historical society, including historical books, photographs and memorabilia from the centennial celebration.

Historical society member Twila Boring will use her expertise in genealogy to research families from the area and create family histories. She will be at the display tent to talk with residents about the history of New Florence’s early residents.

“I went back to the 1870 census and I’ve been creating profiles on the names of families that are still here that I recognized,” Boring said. “I am looking forward to seeing how many families from back in the 1870s are still around and to see where they have been from then until now.”

New Florence was originally established as a railroad town.

“When the Pennsylvania Canal closed, the Pennsylvania Rail Road (PRR) moved the track to this side of the river in 1852. It was known as Florence until 1859 when it became New Florence,” said Richard Stuart.

They have some old photos and one ticket stub, so far. They would love to locate some additional PRR artifacts for the display tent. Anyone wishing to submit items should contact the historical society at 724-235-2000.

The society hopes to one day establish a museum in the borough. The group has 731 members following its Facebook page.

Member Doug Hull is putting together a commemorative yearbook for the 150th celebration. The committee will be taking orders during the celebration or at the library. Photographs and information from the 150th anniversary will be included in the book.

The committee will offer a unique keepsake, a commemorative coin featuring the 150th anniversary logo.

“As some may recall, during the centennial — yes, 50 years ago so you’re old if you attended — there was a New Florence commemorative coin available,” said Greg Csehoski. “Those of us that have been around a while remember when the Pennsylvania Rail Road had four sets of tracks going through town instead of the two sets today. As kids, my siblings and I would squish coins on the tracks. It was something to do. Well the committee has contracted with The Penny Men to have squished pennies as souvenirs for the event.”

A special commemorative cancel stamp has been designed for the New Florence Post Office to be used on Aug. 17 outgoing mail. A pre-stamped post card will be available at the post office or at the historical society tent to those who wish to mail or keep it as a memento of the day’s event.

The day’s celebration will kick off with a parade at 10 a.m., followed by a full day of activities for all ages and a full lineup of entertainment.

“Our main events are the parade and fireworks. We just booked that and everything else in between just came together,” Stuart said.

The event will be held in and around the library and the football field across the street.

“We wanted a day full of events for adults and kids alike that would be enjoyable and free,” said Carol Henderson, chairwoman of the 150th celebration.

“The senior citizens center will have a king and queen riding in the parade in an open-top car,” said Henderson. “Two young ladies, Grace Morris and Zayva McCachran, both about 15 months old, will be our grand marshals.”

“Shannon Creek Baptist Church will provide face-painting, cotton candy and all kinds of activities for kids. The local cyber school has also put together a bunch of games for the kids,” said Henderson. “This will be going on all day for the children and everything is free.”

There will be a tractor pedal-car pull by the Brush Valley Tractors group at 1:15 p.m.; a cornhole tournament at 2:05 p.m., and a magic show by Steve Haberman of 13th Hour Entertainment at 3:05 p.m. on the football field.

A pie-eating contest will be held at the main stage, set up on Ligonier Street in front of the football field, at 12:30 p.m. followed by a milk-chugging contest at 12:45 p.m. Bigginz Restaurant is helping to provide the chocolate cream pies for the contest.

“We wanted pies that would make the biggest mess you can make,” said Stuart.

A street square dance, led by Dunmire, will begin at 8 p.m. on Seventh Street on the side of the library, and the fireworks display conducted by B&D Fireworks begins at 10:15 p.m. This event is sponsored by Somerset Trust Co.

The New Florence Area Historical Society booth will be set up at the library throughout the event. Also on display all day on the library grounds will be an arrowhead display, a military show and a Civil War living history display.

“A local fellow, Rick Nesmith, will display his father’s collection of arrowheads he discovered at an historical Native American village site near the river,” Henderson said.

Lodestar Bus Lines is donating free bus shuttle service to the fairgrounds. The shuttle will run all day, from 9 a.m. to 10:30 p.m., from the New Florence VFW and the playground to New Florence Community Library.

A Ligonier Valley Endowment grant provided funding for much of the event.

“The Ligonier Valley Endowment was incredibly generous to provide not only money for the event but for the borough to also do some sprucing up, sidewalk replacements and other things for the event,” said Henderson. “We could not do this without the generosity of the Endowment and local businesses and small donations in memory of family members. Our goal was to be able to give something to the community that would be free that day.”

The group is hoping local families will invite out-of-town family members to come home for the weekend and celebrate with their community. They also want new residents to join in the fun and meet other citizens from the borough.

“For me, growing up here, to see this group come together and still have this devotion to a community that is constantly changing, is rewarding. We hope this brings the new people in and helps make them feel a little more part of the community,” Henderson said.

Grace’s last name is spelled Morus. Please correct and don’t assume in the future you have a name spelled correctly. Let her enjoy the honor bestowed on her. And check and make sure the other young lady is properly identified. Thank you.