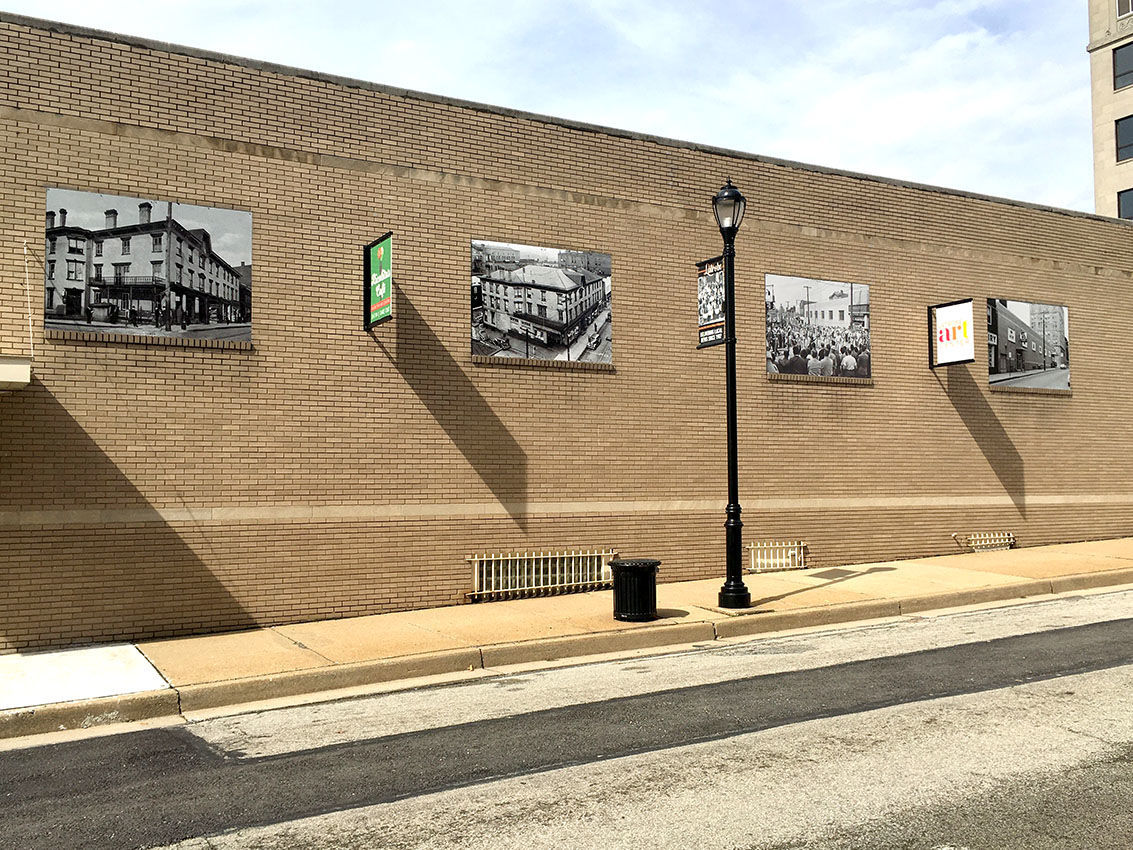 A series of new decals on the side of the Rogers Building in downtown Latrobe offers a look back at the city’s history and past businesses at the location. 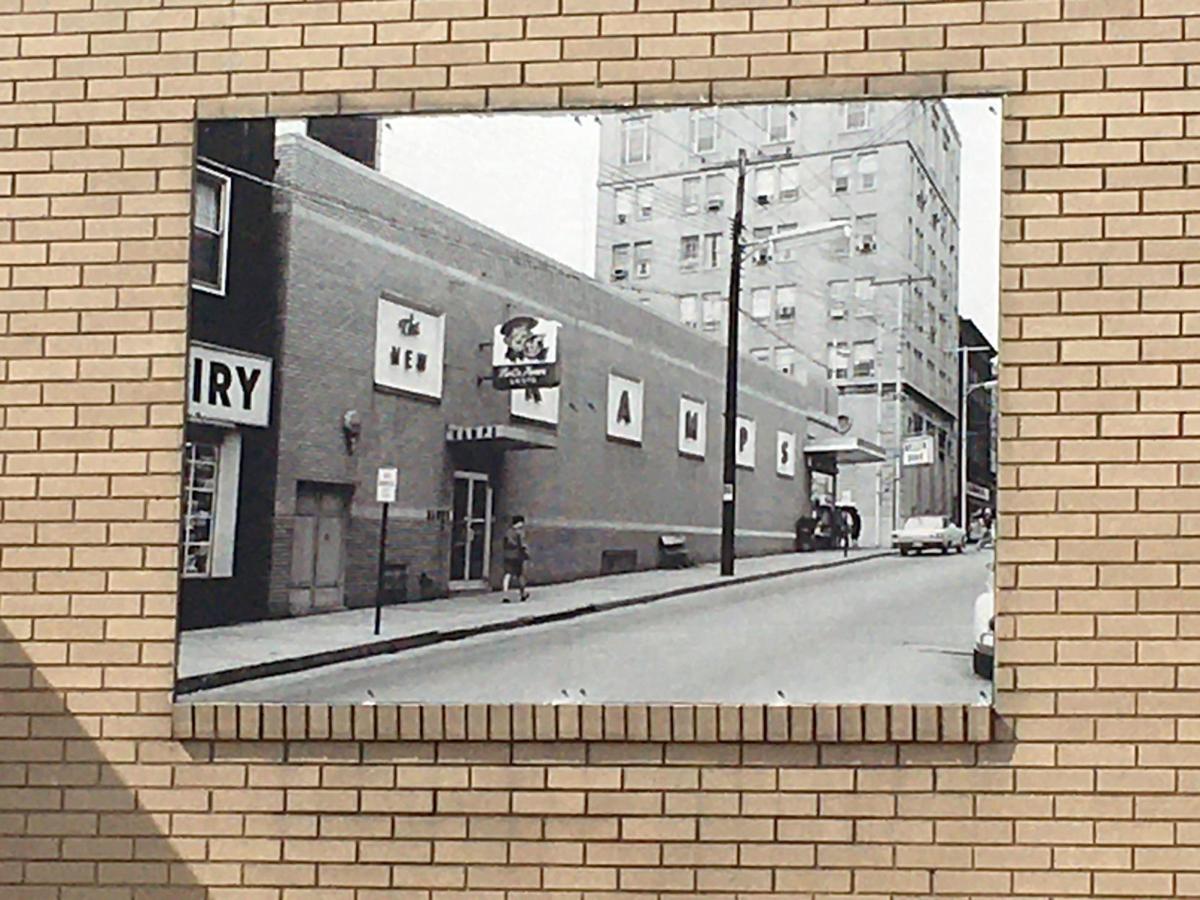 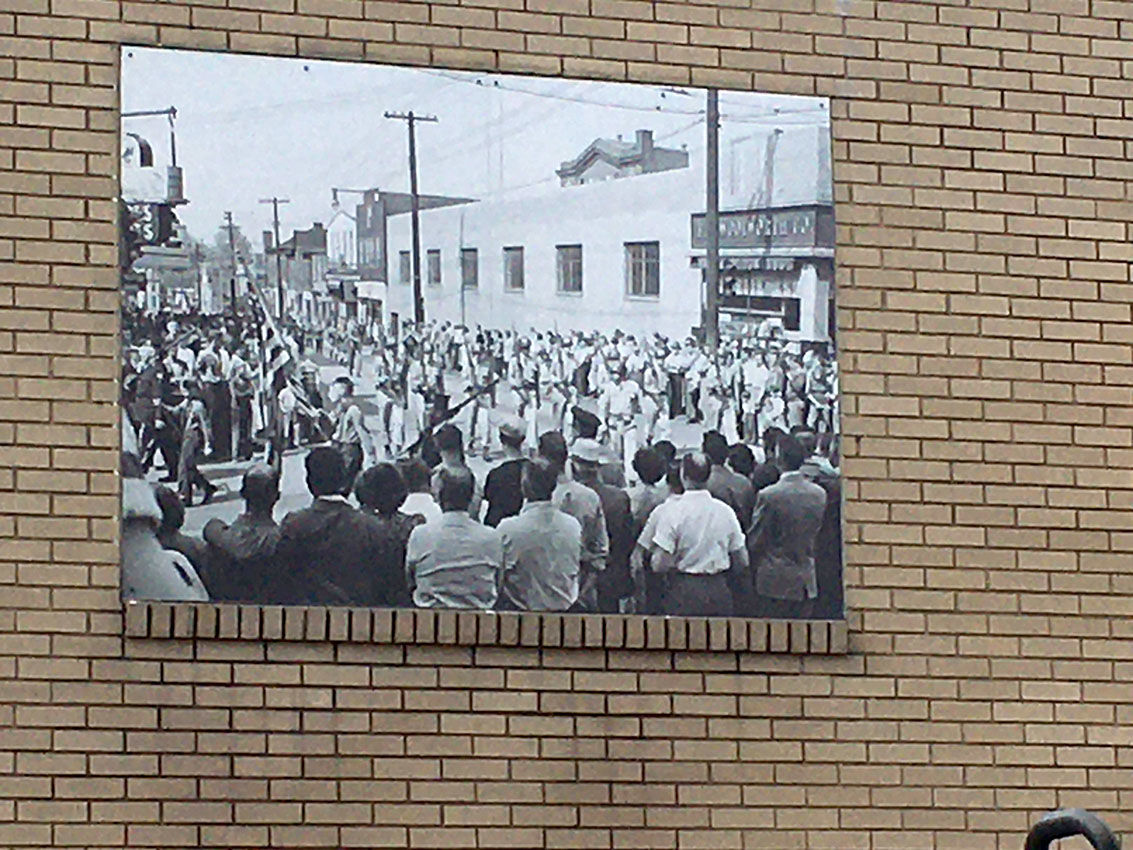 This decal shows a parade through downtown Latrobe near the Rogers Building sometime in the middle of the 20th century. 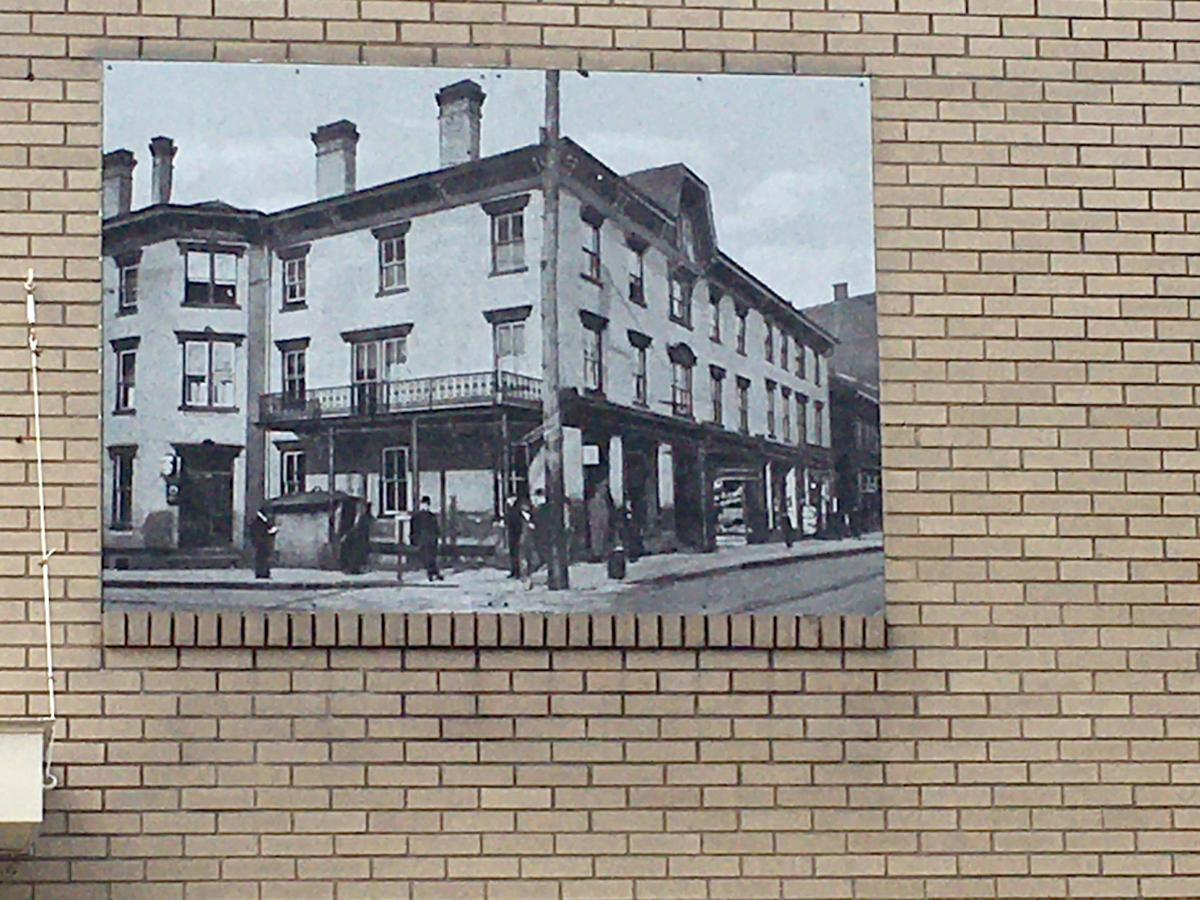 One of the decals shows the Parker House hotel, which opened in 1868 and was a hub of downtown activity for years until it was demolished in the late 1930s.

A series of new decals on the side of the Rogers Building in downtown Latrobe offers a look back at the city’s history and past businesses at the location.

This decal shows a parade through downtown Latrobe near the Rogers Building sometime in the middle of the 20th century.

One of the decals shows the Parker House hotel, which opened in 1868 and was a hub of downtown activity for years until it was demolished in the late 1930s.

A series of new decals on a prominent Latrobe building offers a look back to simpler times, when a large hotel sat in the middle of downtown and busy department stores helped shape consumer tastes.

The Rogers Building — which currently houses Latrobe Art Center, the Greater Latrobe-Laurel Valley Regional Chamber of Commerce and an Excela Health QuikDraw — recently had Greensburg-based Blue Sky Sign Co. install the new decals on the side of the building, located at the corner of Main and Ligonier streets.

Latrobe Art Center Executive Director Lauren Buches said the addition of the decals was spearheaded by the McFeely-Rogers Foundation, which owns the building.

“It harkens back to Latrobe’s past,” she said of the decals, which went up last week.

In all, there are four decals: The one on the far left, closest to nearby James H. Rogers Memorial Park, shows the Williams hotel, which dates back to the 1850s; the second to the left is the Parker House hotel, which eventually replaced the Williams hotel; the third is current building, which once housed a Woolworth’s department and was later the location of Kamps Shoes until the art center moved into the building in June 2002. The sign for the shoe store still sits in the building’s basement, Buches said.

“Some people know about (the building’s past), but a lot of people don’t,” she said.

It’s doubtful that anyone knows more about the building than Mary Lou Townsend, president of the Latrobe Area Historical Society.

Lots for the future building were initially purchased in the mid-1800s by David Williams, who had possible local railroad ties, she said.

Townsend said Williams built the hotel and later bought the entire block between Walnut and Chestnut streets. He donated that space to the Catholic Church, she noted, including an area where Holy Family Catholic Church now sits along Ligonier Street.

Williams operated the hotel for more than a decade before selling it in the mid-1860s, she said. It then became the Parker House hotel in 1868 and was a hub of downtown activity for years.

“It was in the center of town and being just a block-and-a-half away from the railroad, that’s where a lot of the actors and actresses came in and performed at the Showalter Theatre that was on Depot Street,” Townsend said. “It was really just kind of the activity center for the whole town.”

And not all that activity was the good kind, she noted.

“It had its share of scandals,” Townsend said. “The first murder in Latrobe was at the Parker House.”

Over the years, the Parker House hotel made significant upgrades. The hotel was initially two stories, but Townsend said a third story was later added, along with another wing that went clear out to an alley where the Rogers Building is now.

“They built a balcony from the second floor that faced Main Street and the Latrobe Cornet Band, which was a very big thing at the turn of the last century, would do concerts from that balcony,” she said.

Townsend said the Parker House hotel was torn down in the late 1930s when James H. Rogers and his wife, Nancy, purchased the property and built the Rogers building in 1940. The first store to land in the new building was a Woolworth’s department store, which did business there during the 1940s and ‘50s, she noted.

“That was back when Latrobe had three department stores. It had Woolworth’s, it had Reed’s and it had Lowenstein’s,” Townsend said. “Reed’s was on the same street as Woolworth’s, but had different price levels as far as the merchandise they carried. Woolworth’s was kind of like the Kmart (of the time).”

After Woolworth’s closed, she said stores “kind of cycled in and out” of the Rogers Building. Noteworthy businesses that, at one time or another, used the space included Kamps Shoes, Latrobe Newsstand and The Hub men’s clothing store.

“I can’t really keep track of all the stores that were in there,” Townsend said. “But Kamps was there on the corner for a long time.”

Townsend said Latrobe’s downtown business district “kind of got shaken up” in the late 1960s and early ‘70s as a result of federal government-run urban renewal projects taking place across the country.

Pittsburgh was the first major U.S. city to move forward with an urban renewal program more than a half-century ago, as a large portion of downtown was demolished, converted to parks, office buildings and other uses. That section is now known as the Golden Triangle.

“The federal government would give millions of dollars for urban renewal,” Townsend said. “There were some strings — there had to be some low-income housing — but their plan for Latrobe was to tear down 160 of the 200 buildings downtown.

“It just really made a change in the whole downtown look, because a lot of the older buildings were torn down. Then the federal government ran out of money and pulled back on (urban renewal plans). There were supposedly two phases and Latrobe was in the middle of phase 1 when the government announced there wouldn’t be any more money beyond what they had already given (Latrobe), so they didn’t finish tearing down all of those buildings.”

Many of the demolished buildings, she said, were located on Weldon, Jefferson and Depot streets.

While no plans have been finalized, Buches said groups involved with the project may replace the decals periodically. Those replacements could include additional decals of the city’s past or the swapping of decals during the holiday season; Buches said images of a Latrobe Christmas in the 1950s or ‘60s may be a possibility.

“My first love is history and I love that this is happening with the building,” she said.

“It’s a great idea,” Townsend said, adding that the Latrobe Community Revitalization Program and McFeely-Rogers Foundation deserve kudos for continuing to highlight the city’s storied past. “Their whole goal is to build on Latrobe’s past, bring back some of that pride that’s been here all along, and move toward the future.”