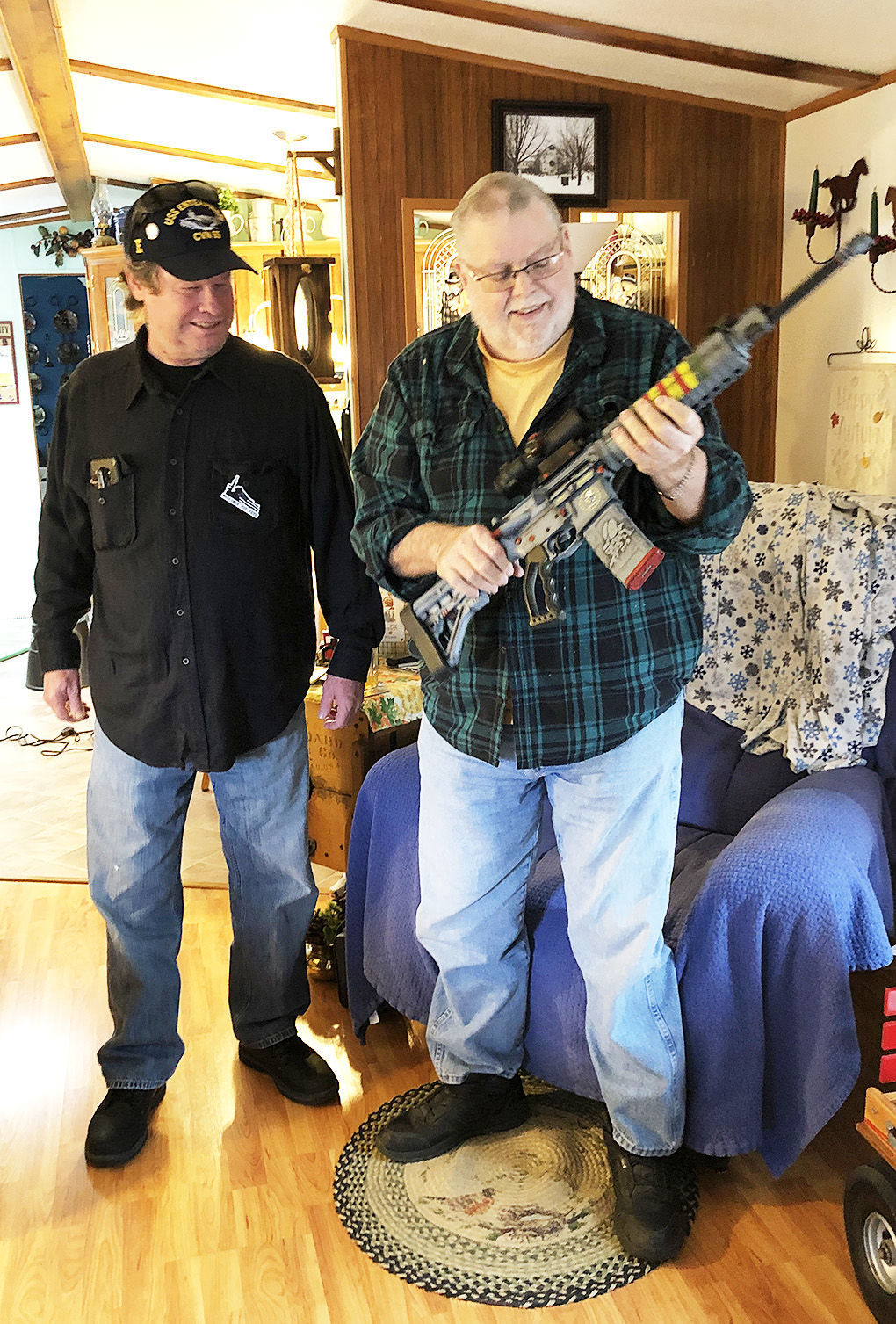 Russ Jackson of Greensburg, as part of nonprofit Marksmen For Vets’ mission to provide unique firearms for veterans to honor their military service, built this custom-made and personalized AR-15 for Ed Queer, 69, who spent most of his life in the Latrobe area and now lives in Ridgway. Queer and Jackson are both veterans of the U.S. Navy. 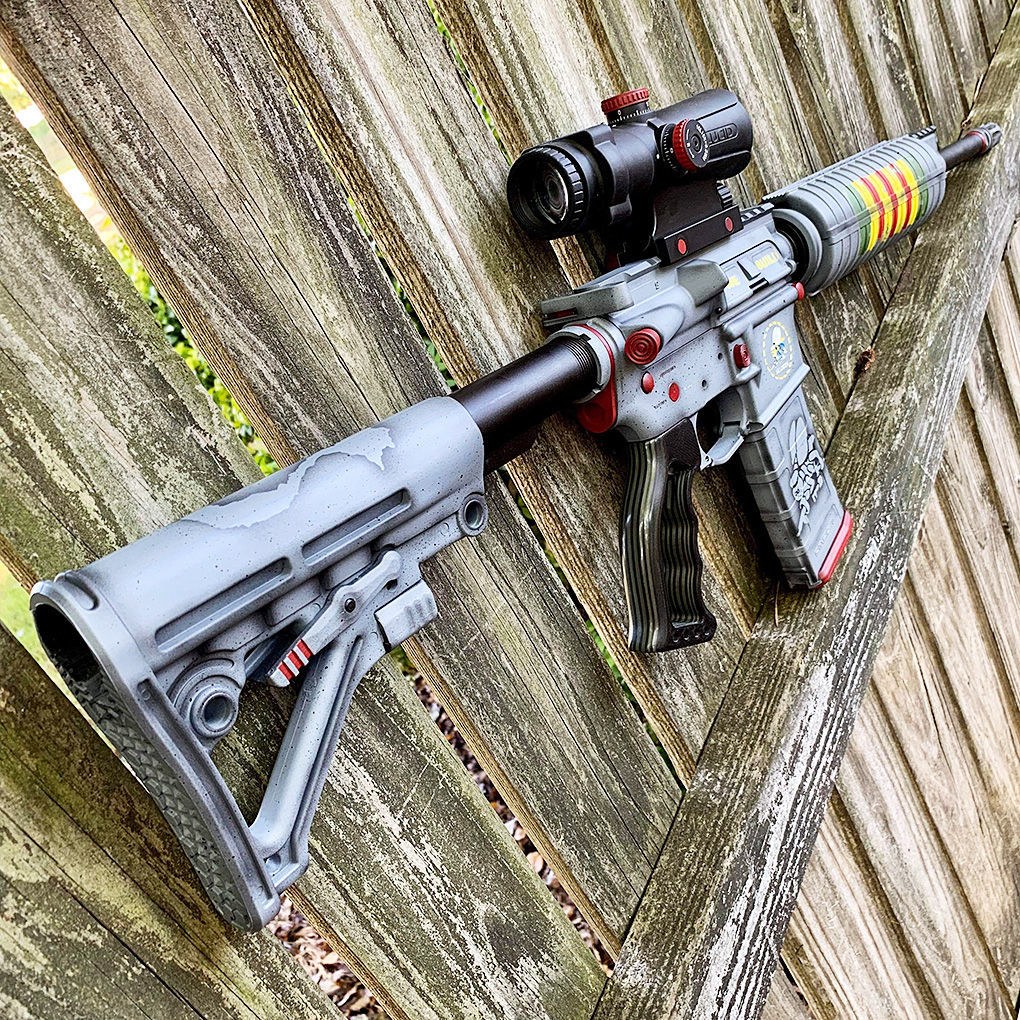 Russ Jackson of Greensburg, as part of nonprofit Marksmen For Vets’ mission to provide unique firearms for veterans to honor their military service, built this custom-made and personalized AR-15 for Ed Queer, 69, who spent most of his life in the Latrobe area and now lives in Ridgway. Queer and Jackson are both veterans of the U.S. Navy.

Ed Queer went hunting last weekend with his son, son-in-law and four of his grandchildren, but he didn’t use the new rifle that he recently received as a gift.

That one is locked up in his gun safe for now because it’s not legal to use an AR-15 for deer hunting in Pennsylvania.

Queer, 69, who spent most of his life in the Latrobe area and now lives in Ridgway, was the recipient of a specially designed rifle that was built by Russ Jackson of Greensburg, founder of Marksmen For Vets. The nonprofit organization selects a recipient from nominated honorably discharged military veterans who are in need, and who can legally own firearms. They are given to these veterans to honor their military service.

“We present them as a surprise,” Jackson said.

Queer had no idea what his longtime friend James Baum of Cook Township was up to when he arrived last month to visit Queer at his home in Elk County.

“He talked about coming up to visit me and bringing my cousin, and when I saw him pull up and they got out, that wasn’t my cousin,” Queer said. “I didn’t know who it was.”

It was Jackson who was with Baum, and they casually went into the house to visit. Then Baum went out to the truck and brought in a case, opened it and took out the rifle. Queer remarked about “how beautiful” it was and said, “I would love to have something like that.”

Jackson told him, “It’s yours.”

The look on his friend’s face is something that Baum will never forget. “It was priceless,” he said. “Ed just sat there admiring it in disbelief. He just could not believe it.”

In the past couple of years, Jackson has built eight AR-15s for veterans and also for law enforcement officers. Each one is personalized relevant to the veteran’s military service, for instance, with their unit’s insignia.

“When I found out about it a couple of years ago, I told Russ that I had a very close friend who was a disabled veteran,” Baum said. “I said that with as many bad things that have happened to Ed over the years, it would be really nice to put this thing together for him.”

Queer, part of the U.S. Navy Seabees, was exposed to Agent Orange when he served in the Vietnam War from 1970 to 1972. As a result, he developed cancer in the liver, kidney and spleen, and one kidney was removed. The remaining kidney is failing. He was put on the transplant list on Oct. 15, and is undergoing dialysis three times a week at a Veterans Affairs facility in DuBois.

Jackson is a veteran of the U.S. Navy. He joined in 1982, served as a machinist on the U.S.S. Acadia and U.S.S. Enterprise, and was honorably discharged four and half years later at the rank of E5. He’s originally from San Diego and, like Baum, he’s a machinist.

Baum is not a veteran. He had his shots and was heading for Vietnam when it was discovered that he had a heart murmur. That put him on hold, and by the time he had a follow up exam, the war was winding down and he didn’t have to go.

Baum and Queer had both lived around Pleasant Unity but didn’t know each other when they were growing up. But Queer’s future wife Vicky was in Baum’s homeroom in junior high school.

Baum lived in Florida for a time, then came back to the area and bought a house in Pleasant Unity. He ran into Vicky at a community event about 30 years ago and she invited him to come out to the family farm to meet her husband Ed.

“We have been the best of friends ever since,” Baum said. “Ed and I hit it off like brothers, and he tells people that I am the brother that he never had. He’s the kind of guy who would give you the shirt off his back.”

He was the kind of guy that Baum thought deserved to have one of the custom-built and personalized rifles.

Jackson started building AR-15s to help a disabled friend who was unable to build one himself.

“We were out shooting and he had his guns and I had my AR, and he said, ‘Russ, I gotta get me one of these,’” he said.

Jackson networked with friends for parts, got donations from businesses and someone volunteered to paint the rifle that he assembled. It turned out to be therapeutic for his friend.

“He has Parkinson’s disease and when I first gave it to him, he had just had an electro-stimulator implant put into his brain to calm the tremors. He still has tremors but when you get him behind the rifle, the concentration and focus that it takes for him to shoot calms him down and he shoots really well. He can’t walk but he can sit still, so there’s a lot of therapeutic value in marksmanship for him.”

AR-15s are considered a modern sporting rifle. AR stands for ArmaLite Rifle, the company that in the 1950s originated the design that somewhat resembles a military M-16, and 15 is the model number. They are now produced by several different firearms manufacturers.

The rifles are easily customized, including for caliber, and gained popularity for target shooting and competitive shooting. The National Shooting Sports Foundation calls them “the most common firearm in the country” and in 2018, estimated that there were 16 million of them. Some states, not including Pennsylvania, permit them for medium and big game hunting.

Jackson assembles the rifles from parts donated by corporate and private donors, and a volunteer paints them to personalize them. Queer’s rifle has the Seabees insignia, his name and rank, and an outline of a map of Vietnam.

“That gun is almost like what I carried over there, except that it’s not fully automatic,” Queer said. “It was a shock for me to get it, and I’m glad I was sitting down. It was a total surprise, a very nice surprise.”

For information about the project, go to Marksmen For Vets on Facebook.