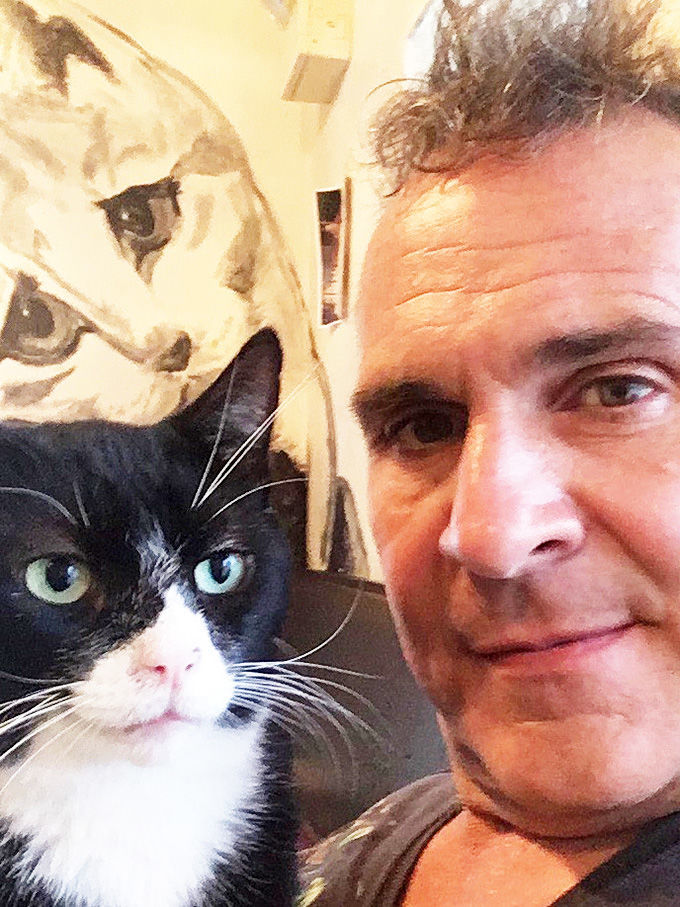 “Benjamin” the cat and Raphael Pantalone at Frankie’s Friends in New Kensington. 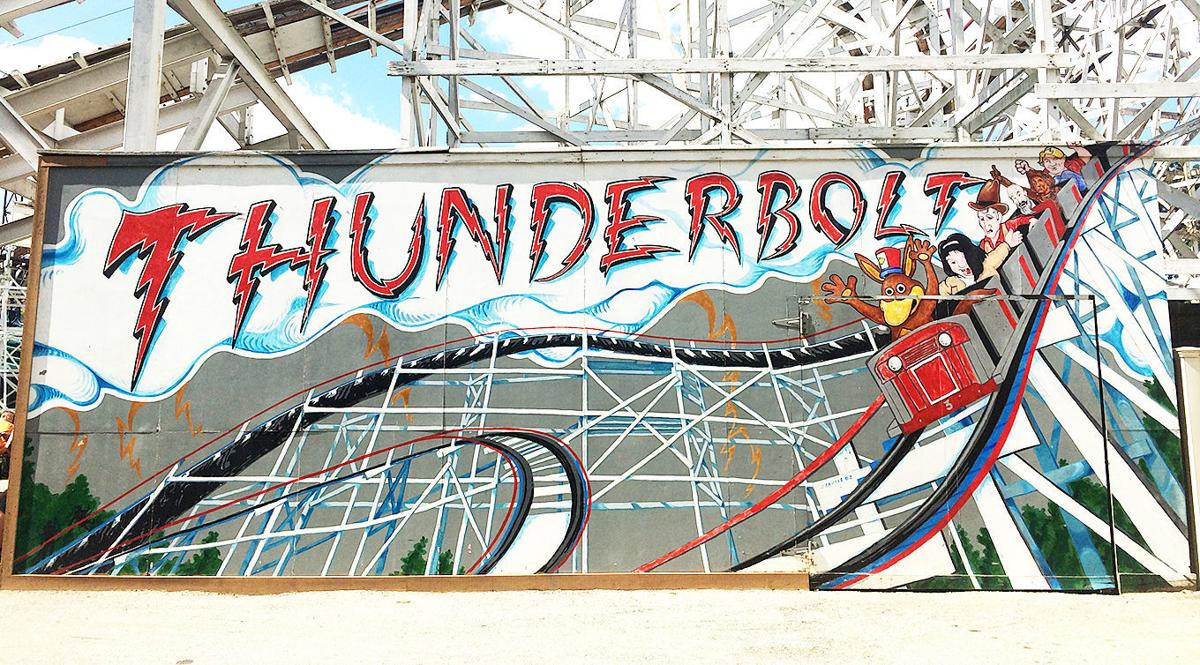 The Thunderbolt mural at Kennywood Park in West Mifflin. 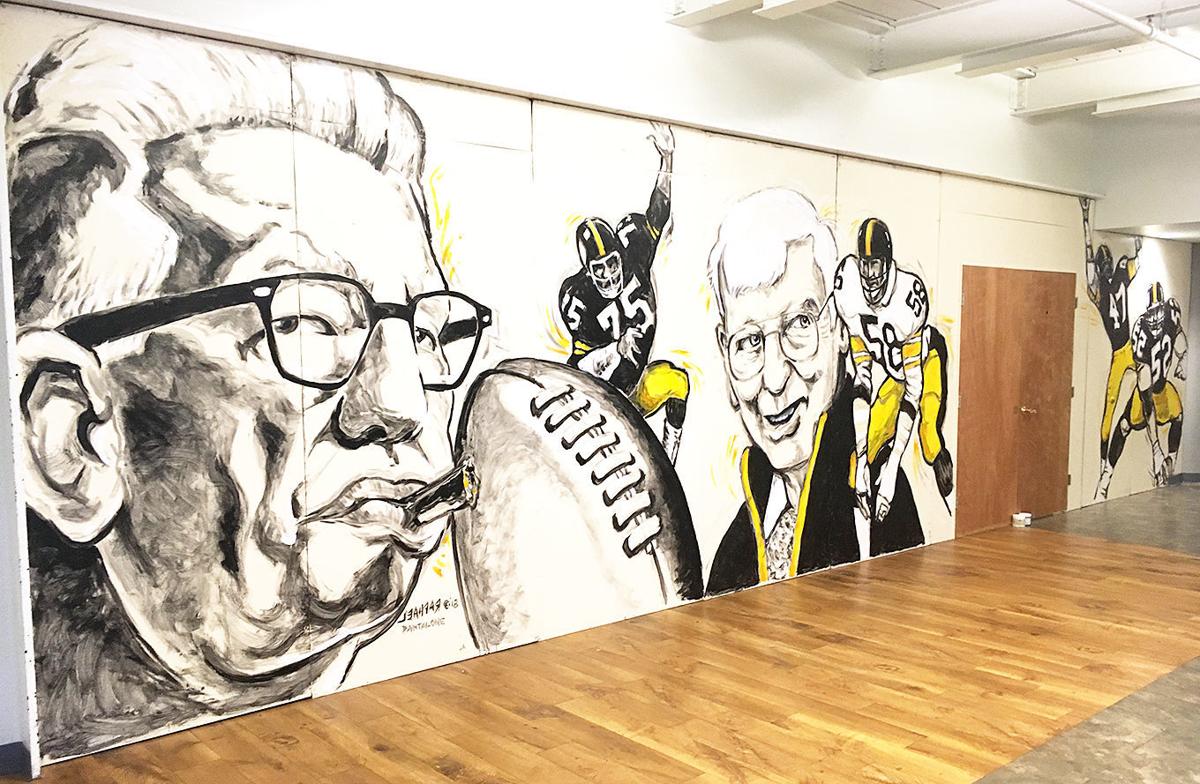 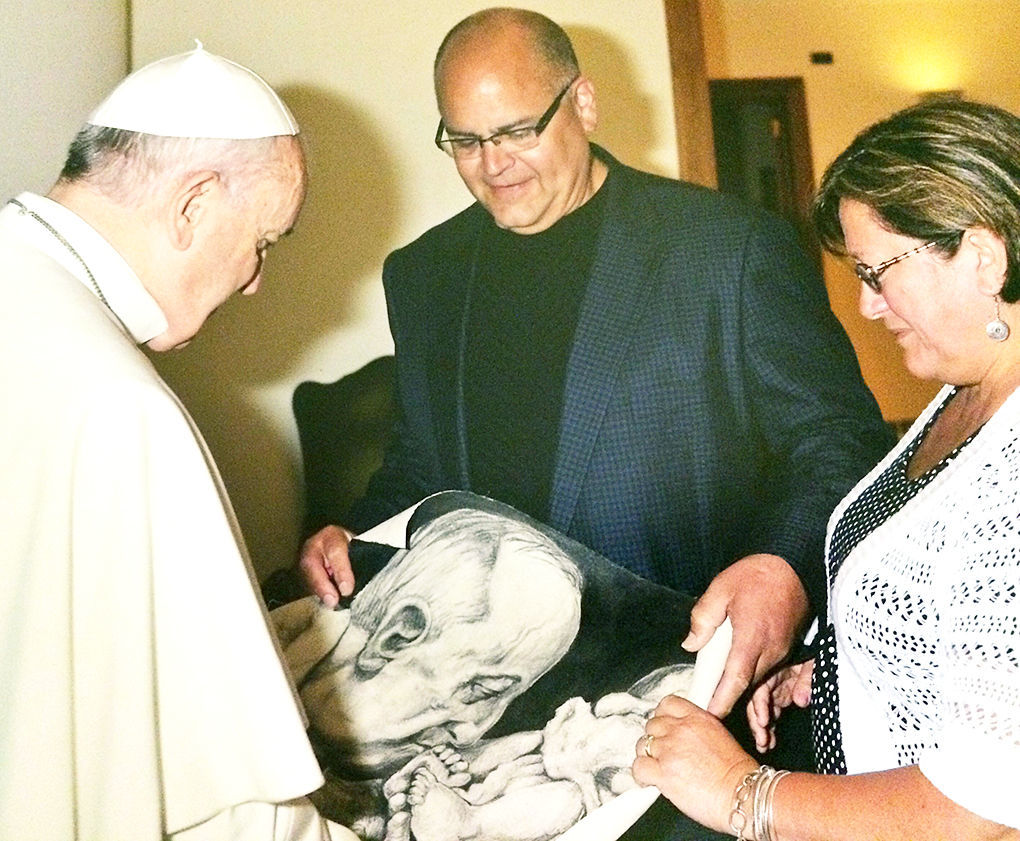 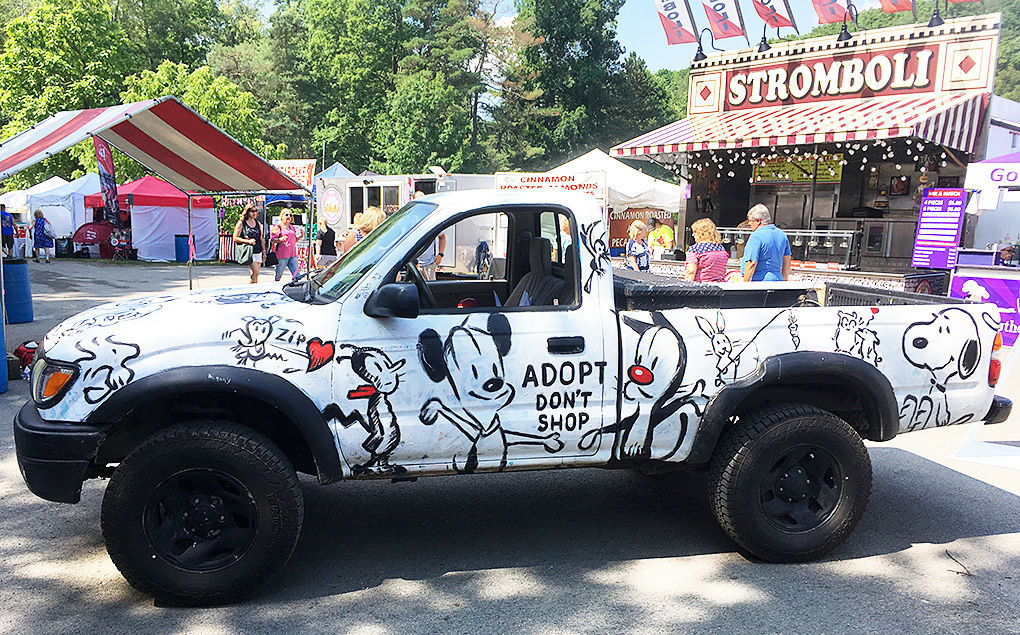 Raphael Pantalone painted characters from the Mutts comic strip on his truck for the Westmoreland Arts & Heritage Festival at Twin Lakes Park last summer as part of a fundraising effort for animal shelters. The lower photo shows The Thunderbolt mural at Kennywood Park in West Mifflin that he painted. 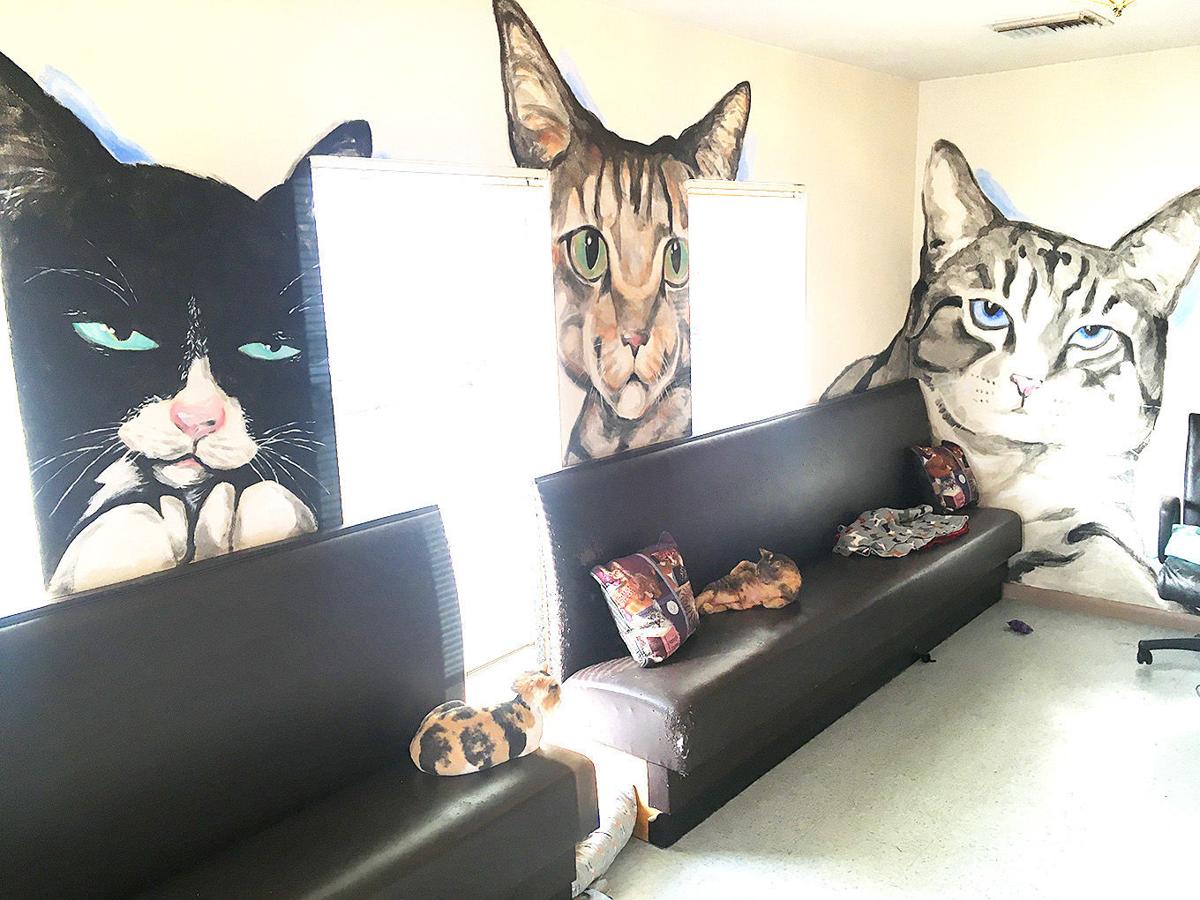 Raphael Pantalone created this cat mural at Frankie’s Friends, an animal rescue organization in New Kensington, in December, and it received national attention after it was featured on the website of the popular comic strip Mutts.

“Benjamin” the cat and Raphael Pantalone at Frankie’s Friends in New Kensington.

The Thunderbolt mural at Kennywood Park in West Mifflin.

Raphael Pantalone painted characters from the Mutts comic strip on his truck for the Westmoreland Arts & Heritage Festival at Twin Lakes Park last summer as part of a fundraising effort for animal shelters. The lower photo shows The Thunderbolt mural at Kennywood Park in West Mifflin that he painted.

Raphael Pantalone created this cat mural at Frankie’s Friends, an animal rescue organization in New Kensington, in December, and it received national attention after it was featured on the website of the popular comic strip Mutts.

Raphael Pantalone painted murals on all seven continents and throughout Crabtree and Greensburg. He arranged for his portraits to be presented to two popes, he inspired his students to care about people and pets, and he donated his time and talents to benefit animal shelters.

A project that he completed in December recently caught national attention when it was featured on the website of the popular comic strip Mutts.

Pantalone, who lives in Crabtree, completed that mural for Frankie’s Friends, a low-cost veterinary cat clinic and sanctuary in New Kensington. He did it to observe The Gift of Nothing Day, which was founded in 2017 by Mutts creator Patrick McDonnell. The day (observed on Dec. 15) promotes the gifts of time, creativity and friendship.

“That was pretty exciting,” Pantalone said about the recognition.

Pantalone retired last year after teaching for more than 33 years. A native of Greensburg, he first taught in Baltimore then returned in 1997 to teach art at Metzgar, Nicely and Hutchinson elementary schools and at the middle school in the Greensburg Salem School District.

Along the way, he painted around the world.

“The first time I went out of the country was to visit family in Naples, Italy,” he said. “We went to the original pizzeria, the first one in the world. I drew a picture on a plate and showed it to the owner, who asked if I could paint that on the wall.”

He completed about 15 murals in a train station and restaurants when he taught for one year in Japan. In South Africa, he painted the outline of a mural in a seafood restaurant, leaving it for local artists to finish. The South American project was in a restaurant in Colombia.

Pantalone and his wife Kathleen have been to Australia three times. He did one painting in an Italian restaurant, exchanged art with an aboriginal artist and his ended up displayed at a small museum in the aboriginal community.

He went to Antarctica on a Russian icebreaker and painted a mural on the wall of an Argentinian research center.

“I got to spend some time checking out all the penguins,” he said. “The animals there don’t fear people because they’re not hunted. A penguin was pecking at my foot because I was in its path. I moved and the penguin just kept going.”

Two of his portraits of popes ended up in the Vatican, but he didn’t paint them there. His brother Nat, a funeral director in Greensburg, was friends with a nun who personally knew the late Pope John Paul II. She arranged for Nat and his wife to present Pantalone’s portrait in a private audience with the pope.

Nat later returned to Italy where he met Pope Francis and presented him with a portrait that his brother had painted of the pontiff kissing the feet of a child.

Many of his other murals are visible around the area. There are murals on Long’s Catering and Greensburg Hempfield Motors, both on Route 119 south of Crabtree. In Greensburg, a building overlooking a parking lot has a mural of Gen. Nathaniel Greene. Other paintings are inside buildings. Keystone Kitchen Restaurant in New Alexandria has a mural of Keystone Lake and he’s painted on or in numerous restaurants in Greensburg.

He’ll be painting an auto service business in Latrobe later this year, and a restaurant in Murrysville. Two weeks ago he painted at Pizza Parma in Pittsburgh.

Pantalone loves animals and is a fan of the Mutts comic strip and books. About 10 years ago, his art students drew pictures of animals that he presented when he met McConnell at an event in Baltimore. Pantalone took student drawings again two years ago when he and his wife attended the musical version of McConnell’s “Me Jane.” It was performed at the Kennedy Center in Washington, D.C., where he met anthropologist Jane Goodall.

He was hooked when McConnell released the charming book “The Gift of Nothing,” in which Mooch the curious cat and Earl the ever-trusting dog discover that an empty box is the finest gift because what really counts is the presence of their friendship.

McConnell has written and illustrated a number of books, all centered on his Mutts characters and other animals. He donates a portion of the profits to benefit animals.

“I love how he connects a little humor and tries to get people to have empathy for animals and other people,” Pantalone said.

In 2017, Pantalone and his students celebrated the first Gift of Nothing Day by decorating empty gift boxes at Barnes & Noble Bookstore in Hempfield Township. Last summer, he painted Mutts characters on his pickup truck and took it to the Westmoreland Arts & Heritage Festival at Twin Lakes Park. People were invited to draw their own pets on the truck and to purchase raffle tickets for Pantalone’s pet portraits. He raised more than $1,000 that he donated to shelters.

In December, he took his paint and brushes to Frankie’s Friends, an organization that was founded after veterinarian Dr. Becky Morrow and a group of volunteers took in dozens of cats that survived a horrific hoarding situation. He heard about them through the local Copycat Sanctuary when he asked for assistance to take care of a colony of feral cats.

“I took walks behind the school when I taught at Metzgar and there were a lot of cats running around a barn,” he said. “Somebody needed to take care of them.”

He got in touch with Copycat Sanctuary, which arranged for them to be trapped, neutered/spayed and released. That’s how he learned about Frankie’s Friends.

The sanctuary was named after a special blue-eyed cat that Dr. Morrow called Frankie. Pantalone painted the late cat’s portrait in a prominent place at the shelter and added portraits of other cats that he met.

“Each one has a story,” he said. “One, named Charlene, is so cute and she would greet me when I was there. I put her portrait right by the door.”

Pantalone goes back every week to feed the feral cats behind the school. And he has his own formerly feral cat named Blue that his wife, who is director of events at the Fred Rogers Center at St. Vincent College, found by a loading dock.

Pantalone credits his mother VaLaria and his late father, Clement L. Pantalone, for teaching their children by their own examples the importance of volunteering and giving back to their communities.

“My father, being a funeral director, cared for people in need and my mother volunteered for years at the hospital,” he said. “My brother Nat does a lot for the community and for his church, Blessed Sacrament Cathedral. I learned that everybody has something to give. For me, that’s being able to draw and paint.”