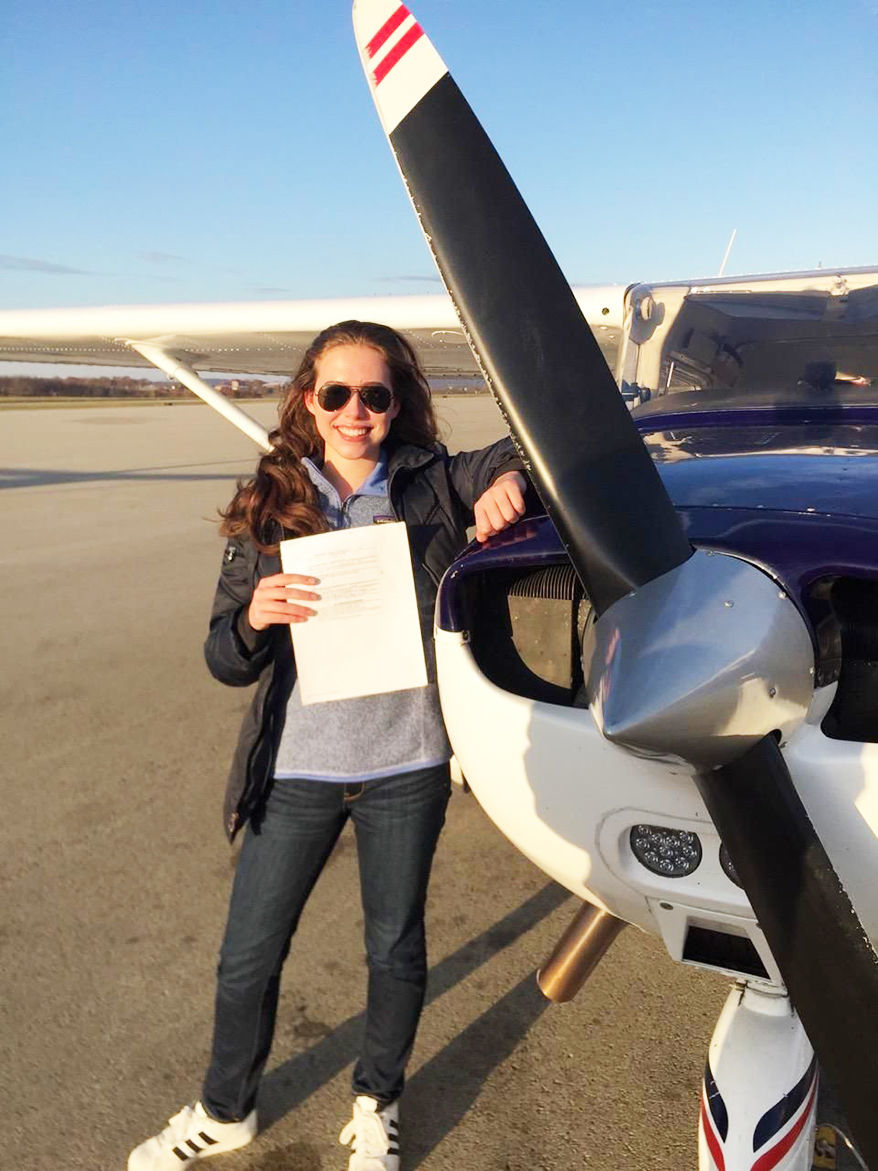 Brynne Barr proudly displays her private pilot’s license in front of the Higgins Airways Cessna 172N in which she completed her flight training and testing. 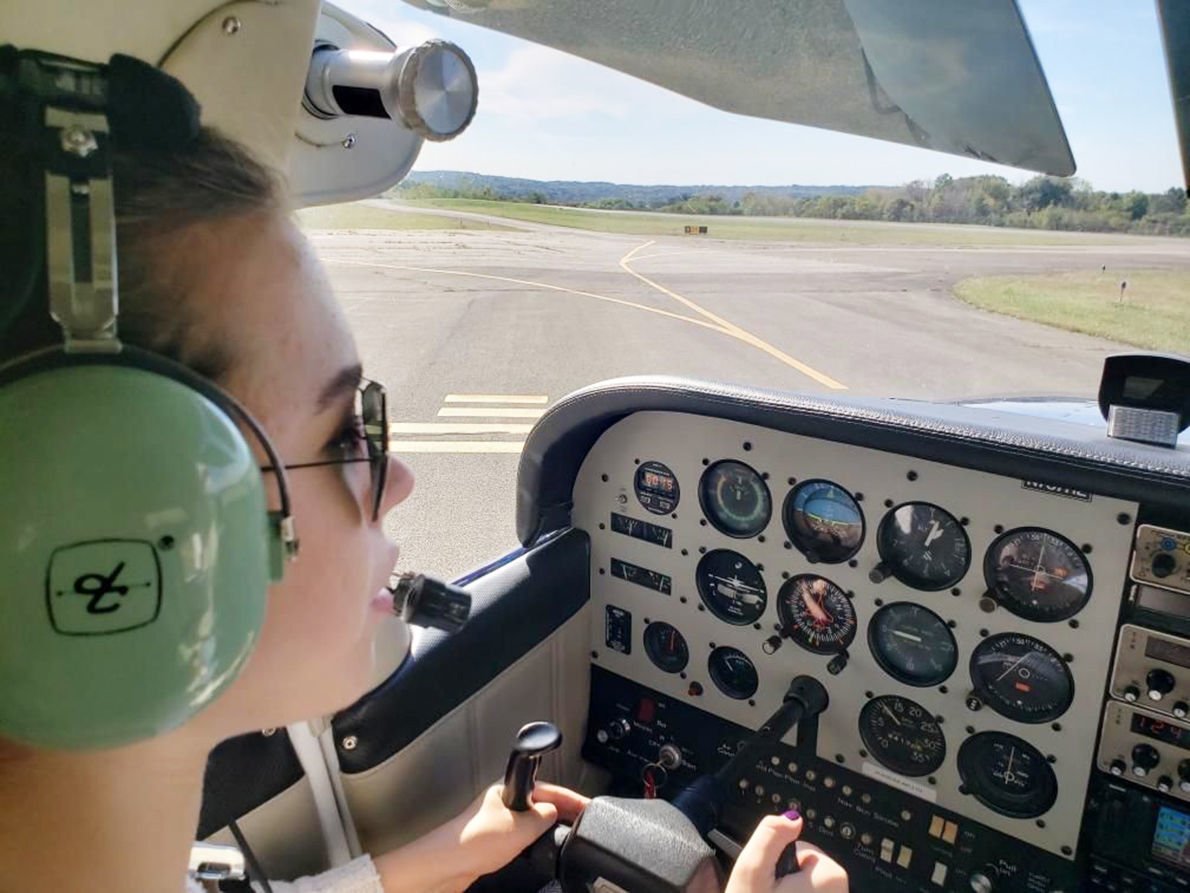 Brynne Barr, 17, of Ligonier Borough at the controls of the Higgins Airways Cessna 172N in which she completed her flight training and testing.

Brynne Barr proudly displays her private pilot’s license in front of the Higgins Airways Cessna 172N in which she completed her flight training and testing.

Brynne Barr, 17, of Ligonier Borough at the controls of the Higgins Airways Cessna 172N in which she completed her flight training and testing.

Ligonier Borough’s Brynne Barr might give people second thoughts about complaining that today’s teenagers have their heads in the clouds.

Barr, 17, recently earned her private pilot’s license after logging nearly 90 hours of flight time under the instruction of Chris Higgins, who founded Higgins Airways in Ligonier in 2017.

“He took my sister and I up for a bit of a scenic-flight/first lesson and I absolutely loved it and decided it was what I wanted to do,” Barr said.

And with a looming pilot shortage on the horizon, her aspirations of becoming a commercial airline pilot have a pretty down-to-earth rationale.

“In 2022, one pilot will retire in the United States, on average, every 36 minutes,” Higgins said. “We will be retiring pilots five times faster than we’re producing them. By January 2023, it will turn from a pilot shortage to a pilot crisis ... I could teach every kid in Pennsylvania to fly an airplane and it’s still not going to solve the problem.”

“There’s a lot of job security guaranteed going into this career. I loved it so much, but learning that I would be basically guaranteed a position based on the shortage was definitely an upside of learning to do it,” Barr said. “And it definitely made me want to go through and get my licenses as soon as possible rather than waiting.”

An interest in aviation also runs in Barr’s family — her grandfather, Capt. William Barr, was former flight operations vice president for US Airways.

Although her grandfather passed away before Barr was born, stories about him and his career in aviation helped fuel her goal of becoming a pilot.

“We have all of his old flight manuals and logbooks, and a lot of pictures of him, especially at my grandma’s house,” she said. “That’s a frequent topic around our house and I definitely felt inspired more to go for my license because I know he was a pilot.”

Higgins said prospective pilots must first pass a medical examination from a Federal Aviation Administration (FAA)-certified physician, FAA and FBI background checks, a written examination and complete at least 40 hours of flight time, including specified maneuvers and guidelines before testing with an FAA pilot examiner to complete both an oral test and flight test to obtain their private pilot license.

“The flying bug definitely hit this one fair and square,” Higgins said. “I’ve taught over 350 pilots since 1989, I’ve been an instructor for that long, and I would have to tell you she is better than 90% of the men I’ve taught.”

Barr is home-schooled, allowing more flexibility in her schedule to work on her flight training.

“The bookwork is definitely the hardest because there’s just so much of it,” Barr said. “You have to know what absolutely everything is and what to do in every single situation. That definitely took the most time. The flying’s just my favorite part, so I never really felt like that was work. That was the fun part of learning to fly was actually doing it.”

Solo flights were a significant portion of Barr’s work toward her license, including a 260-mile, three-stop solo flight which she completed on her 17th birthday, flying alone from Latrobe to Clarksburg, Parkersburg and Wheeling, West Virginia, and back to Latrobe in a Higgins Airways Cessna 172N.

Barr’s first solo flight came when she was 16, and solo really means solo in the aviation world.

“I was standing by the fuel pump and she flew on by,” Higgins said. “Solo doesn’t mean manipulating the controls while the instructor sits in the back seat, I’m literally sitting on the ground and that kid goes flying off 120 miles per hour by herself.”

“I felt pretty confident in what I was doing. I’d been practicing before I went out solo,” Barr said. “It was a little bit nerve-wracking at first, but I absolutely loved it.”

It’s taken a little longer for Barr’s parents to get past the nerve-wracking part.

“I feel physically sick every time she’s up in the air, but I think any parent would,” her mom, Dr. Lisa Barr, said. “We just want her to be very well trained. She’s only 10 years away from doing this as a profession. You really need a lot of time to become good and competent at something. When you’re doing something that does not have room for error, you need to be well trained. That’s really our goal as parents is to make sure that she has the resources and the time commitment to be well trained.”

Brynne’s passion for flying and her career goal came as a surprise to her parents, who hammered home the amount of commitment going after a career as a pilot would require.

“We never saw it coming, honestly,” Lisa Barr said. “We were pretty surprised when she initially expressed interest, but once we knew she was serious about it, we were just really happy there was such a good instructor here and we told her she could do it as long as this was what she really wanted.

“We realized as parents that it’s not something you allow your child to do casually, so we had a long talk with her about the commitment it was going to take. It’s really something you have to double-down on for her to be competent at it. She puts in not only time behind the controls of the airplane, but on a literally daily basis she studies FAA manuals, does flight courses, video flight courses and is reading different things her instructor gives her. It’s a lot of home study in addition to that, and that, to me, tells me that she’s very dedicated. If she wants to bog through a boring FAA manual, then we saw as parents that this was what she really wanted to do.”

With her private license under her belt, Brynne has already started working toward a career as a commercial pilot, which requires more flight time and testing. She’s in the process of obtaining her instrument rating, which will allow her to fly in a variety of weather conditions.

“For my instrument rating, it’s a little bit less of a time commitment than a full license because it’s just a rating,” she said.

“I expect to have that done sometime in either late winter or early spring, hopefully around February, but that’s so weather-dependent. I’m already working on all the book work for it. Best-case scenario we get it done in January, worst-case scenario it’s like April, it really just depends on the weather.”

After that, she’ll have to wait until her 18th birthday for a commercial license because of age restrictions, even if she’s already met the other requirements. Higgins said he expects Brynne to be certified as a flight instructor well before she turns 19 and well on her way toward her commercial airline pilot career goals.

“I’m very grateful to have extremely supportive parents. Not every parent would be totally OK with their kid flying, but my parents trust me to do that and they support me, which I really appreciate,” she said. “And Chris is a great instructor. He really knows the plane inside and out, and everything about the industry as well. I feel really lucky to have been in this situation where I have the opportunity to follow this career.”