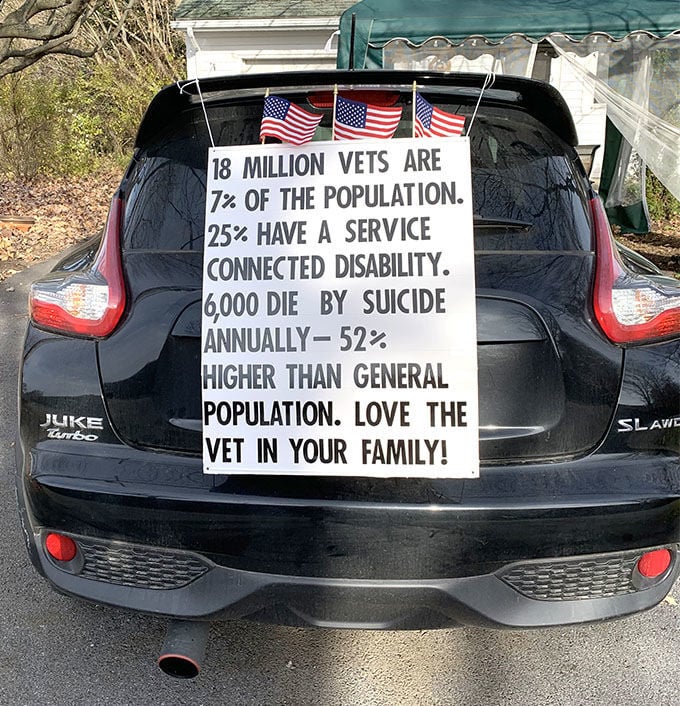 A sign on the back of the car driven by Dave Rogers' sister Mary-Ellen Rogers, who drove slowly behind him for safety during Thursday's walk, notes statistics tied to veteran suicide. 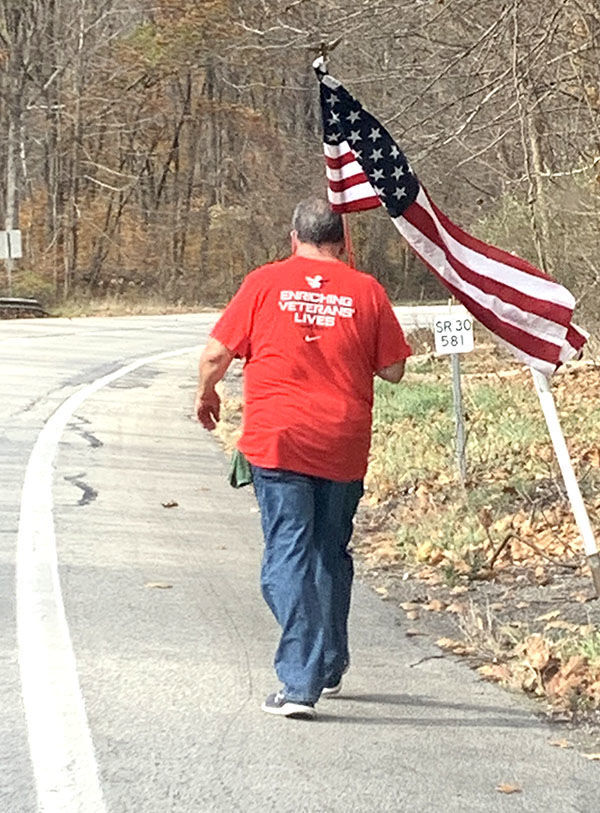 Dave Rogers of Ligonier walked Thursday from Ligonier to Latrobe to raise awareness of the high numbers of veterans who die by suicide.

A sign on the back of the car driven by Dave Rogers' sister Mary-Ellen Rogers, who drove slowly behind him for safety during Thursday's walk, notes statistics tied to veteran suicide.

Dave Rogers of Ligonier walked Thursday from Ligonier to Latrobe to raise awareness of the high numbers of veterans who die by suicide.

It took Dave Rogers of Ligonier three and a half hours Thursday to walk from the veterans memorial at the Diamond in Ligonier to Veterans Memorial Plaza in Latrobe.

He left without ceremony and arrived at his destination without notice. On the 10 miles he traveled on foot, mostly along Route 30, people honked their horns and waved.

They liked his message and his mission to bring awareness to the high numbers of veterans who die by suicide every year.

“There are 18 million veterans in the country and they make up 7 percent of the population,” he said. “About 25 percent of veterans, or 4.5 million, have a service connected disability. About 6,000 die by suicide every year, and that’s 52 percent higher than the general population.”

That was the message on the big sign on the back of the car driven by his sister Mary-Ellen Rogers, who drove slowly behind him for safety. He got those statistics, he said, from the Veterans Administration’s annual report and a Pew Research study.

“I came in right after the Vietnam War and retired at the rank of chief petty officer after the first Gulf War before 9-11,” he said. “I don’t personally have any experience with veterans in this issue, but I’ve done research and it turns out that 38 percent of suicides among veterans occurs in my age group, from 55 to 74 years old.”

So on Veterans Day, he walked to remember them.

Rogers’ brother, Daniel, who lives in their home state of Massachusetts, served 20 years in the U. S. Air Force. Their late father, Edward, served in Korea in post-World War II. Rogers has worked for the U.S. Army Corps of Engineers for 16 years and is now in its emergency management. About 38% of the employees in the corps’ Pittsburgh district are veterans, he said, and three out of four people in his office are retired from military service.

“I’m not sure if the general public is aware that suicide among veterans is really an issue,” Rogers said.

One of the reasons, he noted, is that veterans often don’t talk about their experiences.

According to the 2019 report from the National Institute On Drug Abuse, up to half of Iraq and Afghanistan veterans have mental health disorders that may include depression, PTSD, exposure to trauma, or are suffering the effects of traumatic brain injury. Veterans from other eras are also affected.

Rogers wanted to raise awareness that many veterans are suffering and that there’s help available. He carried a flag in their honor, and at both the beginning and the end of the walk, he and his sister paused to read the names on the monuments and to offer quiet prayers for those served.

Along the way, one couple traveling east saw him, turned around and headed west to catch up with him and to stop and talk.

Rogers works in the federal building in Pittsburgh. There’s a processing station there for men and women who sign up for the military and are heading off to boot camp.

“I’m watching them, all volunteers, going in to sign up,” he said. “They know where they’re going, and yet they come in great numbers. I’m truly amazed at the patriotism and courage that they have. I have all the respect in the world for these young people because they know where they are going to go and they sign up anyway. How can you not admire that?”