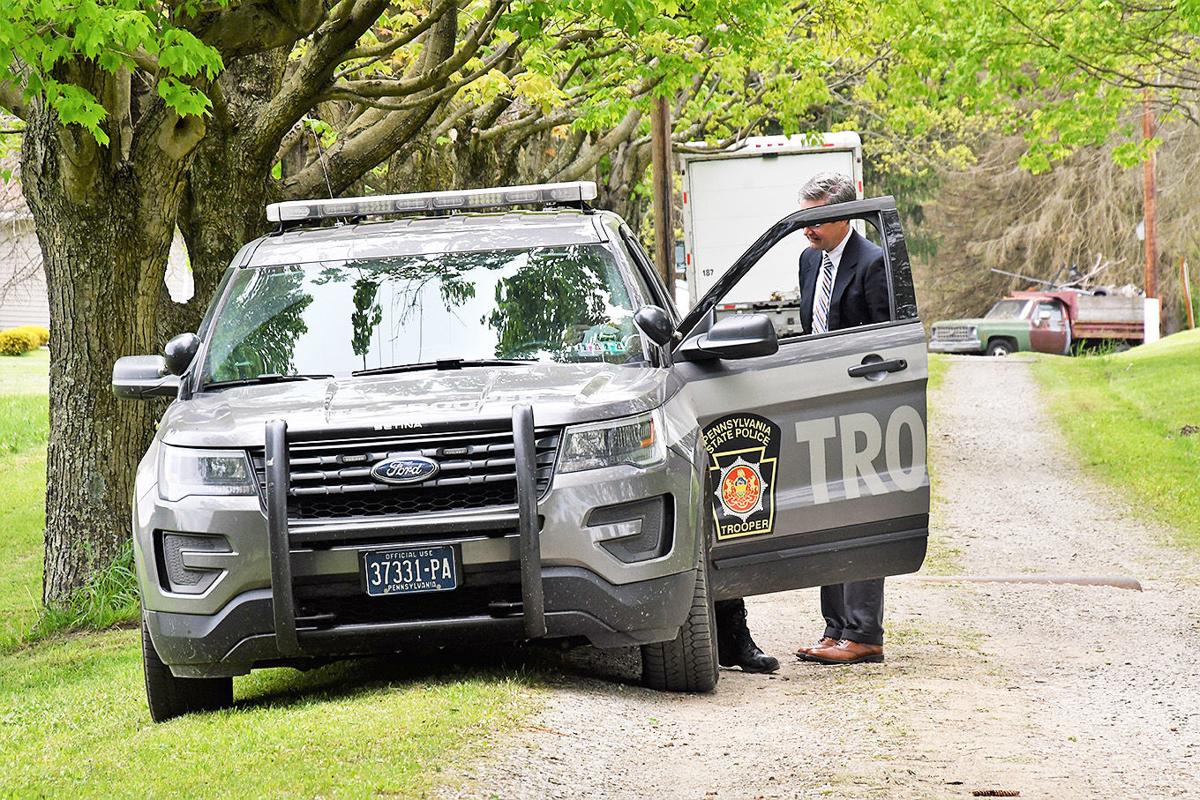 State police block White Fence Lane in Unity Township leading to the property of Almira Stanko as investigators search for evidence in the April 2018 disappearance of Cassandra Gross. 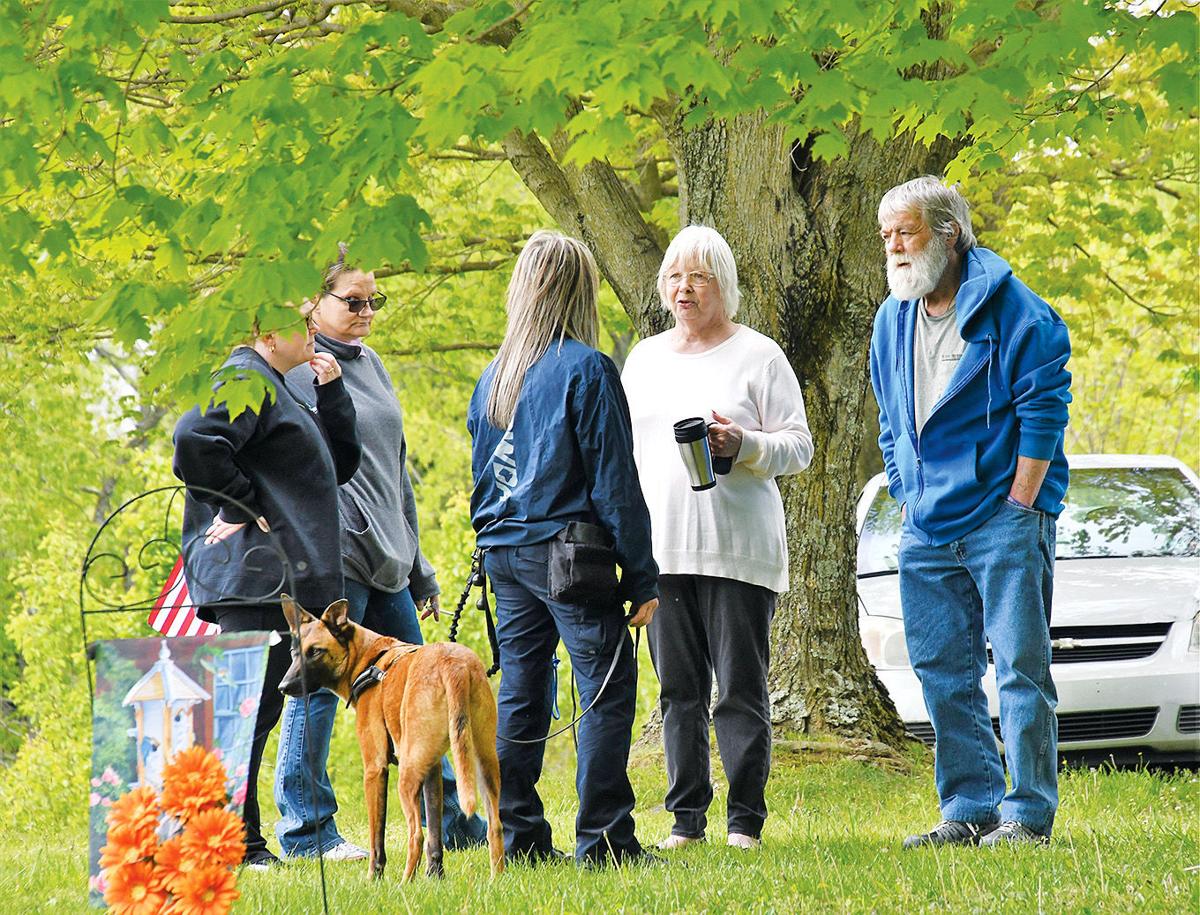 Cassandra Gross’ parents, Kathe and Harry Gross, talk with the handler of a cadaver dog as investigators searched search of a property near Unity Cemetery on Wednesday for evidence in the April 2018 disappearance of their daughter.

State police block White Fence Lane in Unity Township leading to the property of Almira Stanko as investigators search for evidence in the April 2018 disappearance of Cassandra Gross.

Cassandra Gross’ parents, Kathe and Harry Gross, talk with the handler of a cadaver dog as investigators searched search of a property near Unity Cemetery on Wednesday for evidence in the April 2018 disappearance of their daughter.

State police investigators, aided by an excavator and area college professors specializing in biology and anthropology served a search warrant on a Unity Township property owned by the estranged boyfriend of a woman who has been missing for more than two years.

Criminal investigators “during the course of doing their investigation, they felt like they had information and that information was also stamped by a district judge to serve a search warrant on the property,” Tpr. Steven Limani said in a video on the WPXI-TV (Channel 11) website. “We plan on executing the search warrant and staying here until we’re able to search the property for anything that we think might help us to try and give some conclusion of where (Cassandra Gross) went or what exactly happened to her.”

Limani said around 20 troopers and volunteers were focused on a wooded area of the White Fence Lane property to assist with the search, including heavy equipment operators ready to break ground if evidence warranted.

“Search warrants are only good for so long, so we wanted to have all the equipment and everything we need necessary to be here at the property,” Limani said.

State police had previously searched the property, and were at another Unity Township home owned by Stanko to serve a search warrant nearly a year ago. Investigators were seen entering a home on Macey Road near Baggaly and searching the surrounding property throughout the day July 16.

Police did not reveal any additional information about the results of the search at the Macey Road home.

Stanko, 49, has been a person of interest in the disappearance of Cassandra Gross since the days after she went missing on April 7, 2018. He has been in Westmoreland County Prison since shortly after Gross’ disappearance on unrelated charges.

Citing concerns that public disclosure of the details supporting more than a dozen search warrants related to the case could interfere with the ongoing investigation, prosecutors have pushed to keep the records sealed.

The search warrants include “sensitive investigative details not otherwise released to the public,” according to last month’s court filings, as well as the identities of people who have provided information to police.

A Westmoreland County Court of Common Pleas judge in January 2019 declared Cassandra Gross legally dead in response to a request from her son, Brandon Diebold of North Carolina. Judge Chris Scherer ruled Gross the victim of homicide and heard testimony behind closed doors from Tpr. James McKenzie, the state police lead investigator in the case.

Gross would have turned 54 in May.

Family and friends quickly rallied after her disappearance, organizing candlelight vigils, search parties and fundraisers, and offering a $10,000 reward for information leading to a resolution of the case.

Her mother has continued asking anyone with information to contact her at 724-539-9553 and said those providing tips can remain anonymous. She told the Bulletin she has forwarded several tips to state police, but has become frustrated her daughter still hasn’t been found.

The last time Kathe Gross talked to her daughter was around 3:30 p.m. April 7, 2018, as Cassandra was heading home to her apartment in Edgewater Village in Unity Township after having lunch with friends at the Parkwood Inn restaurant in Southwest Greensburg.

Gross was reported missing April 9, the same day her dog Baxter was found walking alone along Beatty County Road near Red Barn Road, heading in the direction of Lloydsville.

Police said it appeared the SUV was taken to the location and set on fire.

In the days that followed Gross’ disappearance, police searched the White Fence Lane and Macey Road properties owned by Stanko.

Stanko has maintained he had no involvement in Gross’ disappearance. He has not been charged in connection with the case.

State police and specialized search teams conducted multiple searches over the spring and summer of 2018 in the area in and around Unity Cemetery, but investigators have remained unable to resolve Gross’ disappearance.

Police have asked anyone with information on Gross’ whereabouts or anyone who saw Gross’ SUV (license plate HLP-1411) in the area of Twin Lakes Park on April 7 to contact lead investigator Tpr. James McKenzie at 724-832-3237.