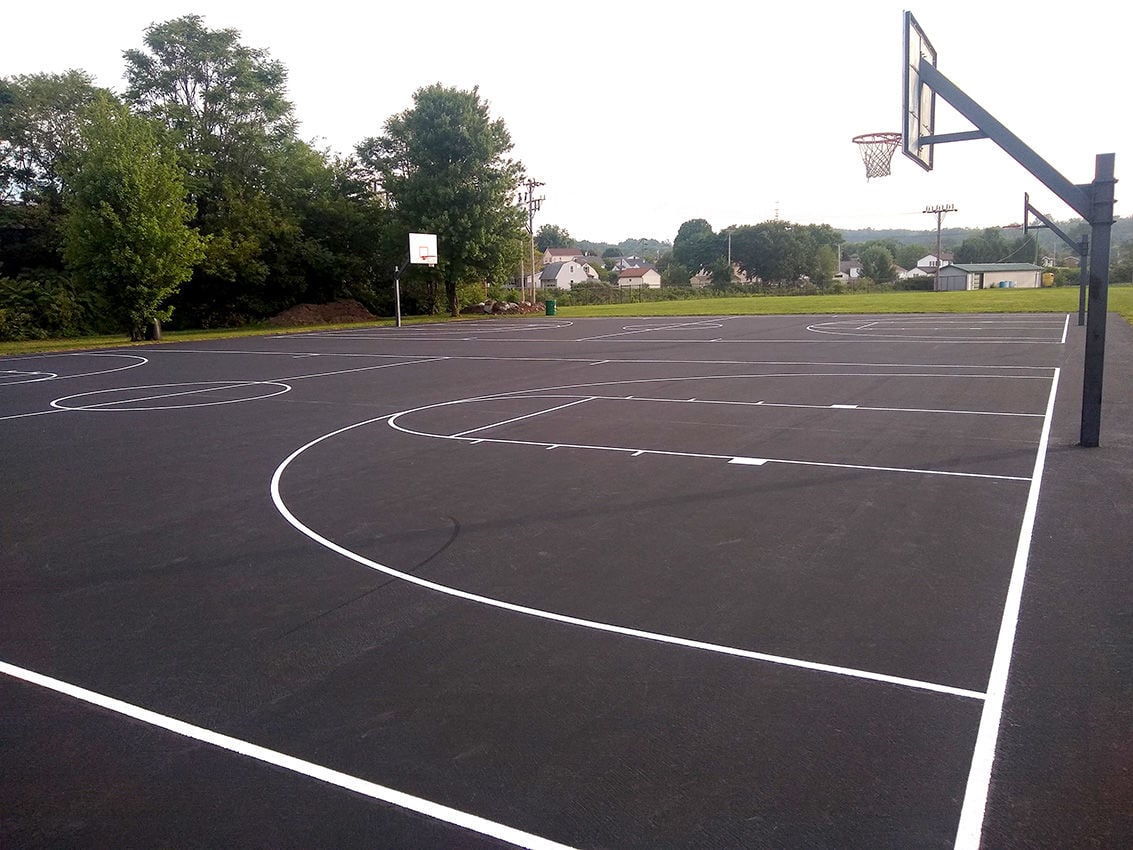 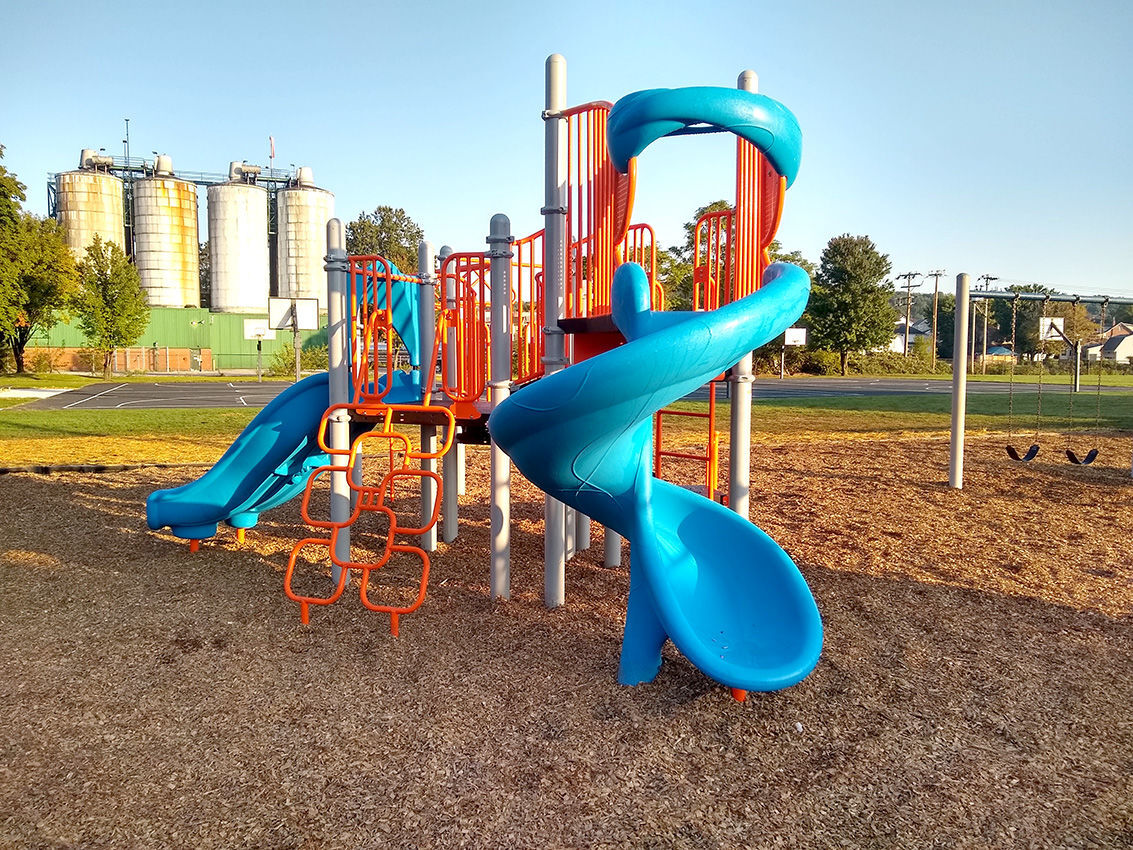 Improvements to the First Ward Playground in Latrobe within the past year was made possible through grant funding from the Pennsylvania Department of Conservation and Natural Resources (DCNR). The grant money was also used for numerous upgrades throughout Legion-Keener Park.

Improvements to the First Ward Playground in Latrobe within the past year was made possible through grant funding from the Pennsylvania Department of Conservation and Natural Resources (DCNR). The grant money was also used for numerous upgrades throughout Legion-Keener Park.

“Really, it’s a revitalization of Legion-Keener Park,” he said.

Efforts to give the downtown park new life began several years ago when Latrobe-GLSD was awarded grant funding through the Pennsylvania Department of Conservation and Natural Resources (DCNR), and has continued in the past year with strong support from the McFeely-Rogers Foundation and Lester Sutton.

The Legion-Keener Park facelift, along with major improvements at First Ward Playground, were the result of a $186,000 grant from the DCNR. Latrobe-GLSD was required to put up a match for the grant — bringing the total amount of the investment to nearly $380,000 — with the funds for the match set to come from the remainder of a pool of $200,000 awarded to the organization by the City of Latrobe from the sale of the Old Athletic Field property on Lincoln Avenue.

The organization said previously that the grant-funded work at the parks included resurfacing tennis courts, refurbishing sand volleyball courts, paving the parking lot and redoing sections of the exercise path.

Grant funding also led to the removal and installation of playground equipment at Memorial Rec Area and First Ward, sealcoating and lining of the First Ward basketball courts and renovations to the First Ward baseball/softball field.

Additionally, the Legion-Keener baseball field used by the Latrobe Jethawks American Legion team was spruced up through grading, adding infield mix, laying crushed brick around the dugouts, renovating the bullpen area and painting the dugouts.

Over the past five years, other parks and recreation upgrades have taken place at Rogers-McFeely Memorial Pool (new pool surface, replacement of the bathhouse roof, new CO2 regulator, upgraded chlorine feeder); at the maintenance building (installation of a high efficiency heating system, exterior painting, replacement of both garage doors, the installation of a rubber), and at the recreation office (new registration software).

Sutton, president/CEO of Aggressive Grinding Service Inc., has also donated $200,000 to the McFeely-Rogers Foundation to be utilized for the parks and rec organization. And along the way, he has provided both hand-ons assistance and in-kind services — tree trimming, lighting repairs, fencing and more — toward recent park improvement projects.

The organization said Sutton, Fred Stynchula and the rest of the Aggressive Grinding team, along with Browns Tree Service, played key roles in the tree trimming and removal work.

“He’s handled a lot of in-kind services and that started last year when he cut several pine trees away from the park’s tennis courts,” Shevchik said of Sutton, who worked with a local lumber company to cut down some trees and de-limb others within the park.

“People just don’t understand how many trees are in Legion-Keener, starting where the gazebo is and all the way down. We maintain all of that,” Shevchik said, noting that the park’s trees have to be pruned and healthy because so many people are taking part in activities underneath.

Another visual change is the area where the gazebo leads to Legion-Keener — a section Shevchik calls “The Point” — that has been entirely cleared out.

“You can actually see the swimming pool, which had been hidden back there,” he said, adding that the area has since been used as a cross-country meeting area, among other uses.

“A lot of people don’t realize a part of the path circles around there — there is a teardrop there,” he said. “So anyone using that part of the path, they feel a little bit safer than walking through the trees. It really opened up the sight lines.”

“Now, when you’re in the park, you can see from one side to the other,” Sutton said of the tree work. “It gave us much greater visibility through the park.”

Sutton also helped provide fencing for the park’s tennis court, with additional help through a grant from the McFeely-Rogers Foundation. He also donated service toward other park upgrades, including: painting light poles and fixtures and repairing lighting at the tennis courts, donating an electric sheds and along with another storage shed for Latrobe Little League.

“That’s the great thing about Lester — he’s not just writing a check and walking away,” Shevchik said. “He’s hands-on, and his guys get a lot of work done in a little bit of time, I can tell you that.”

Added Sutton: “I’ve been able to work with people in the community to donate services whenever we’re doing those projects,” he said. “There’s a debt of gratitude to a lot of people.”

Aside from Sutton, Shevchik said much of the credit Legion-Keener’s resurgence goes to McFeely-Rogers Foundation, which owns the bulk of Latrobe-GLSD’s parks.

“We have a lot of meetings about the vision of the parks department and the vision of the Latrobe Foundation,” he said of the foundation. “Since we are partners, it’s important we’re on the same page and to make sure they understand what we’re trying to accomplish now and in the future. They’re good to work with and the board is excellent and it really keeps the local in mind. Some foundations spend a lot of their time and money elsewhere, not where they’re actually located. They’re focused on what they can do to improve the Greater Latrobe area.”

Shevchik said grant funding was also used to resurface four tennis courts at Legion-Keener, along with the court’s practice wall area. The organization also turned court No. 4 into a pair of dedicated pickleball courts.

“A lot of snowbirds coming back (to Latrobe) from Arizona or Florida had been pounding me for us to get some pickleball courts,” he said with a laugh. Shevchik added that a portion of court No. 3 has been striped for pickleball games but still boasts traditional tennis court netting.

“That’s a multi-use court for tennis and pickle ball,” he said. “So there could be three pickle ball games going on at once.”

A large portion of the grant money — roughly $115,000 — was used to pave the Legion-Keener parking lot and portions of the walking path. Given the condition of the area, along with the walking path’s heavy use, especially between the hours of 5:30 a.m. through lunchtime, Shevchik said the paving simply “had to be done.”

“We repaved a lot of the bad areas and there’s other sections I’d like to get to in the future, like behind the municipal building and those high rises,” he said.

The goal of the grant funding was to tackle high-priority items such as paving and tree removal and spread the rest of the money out to other upgrades throughout the park system.

“I tried to spread it out to get more bang for the buck,” he said. “We hope to make the entire community feel the impact of the grant and not (focus) on just one location. I feel like we’ve done that.”

And what does the future hold for Legion-Keener Park? In the short term, Latrobe-GLSD Parks & Recreation, along with Sutton and the foundation, are working on installing a batting cage near the tennis courts, likely before the end of the year. Sutton said plans are also in the works for a new bathroom facility near volleyball courts, along with adding bathrooms, locker rooms and a concession area near the American Legion baseball field backstop.

A major future project is bringing dek hockey back to the city. While details are being hashed out, both Shevchik and Sutton said the organization is eyeing a vacant all-purpose field near the Little League field and the Latrobe Memorial Stadium parking lot as a potential future dek hockey location.

Overall, Sutton said “there is still work to do” within the city’s park system, and it goes beyond the addition of dek hockey. He mentioned a ambitious long-term goal of bringing an ice skate park to Latrobe.

“My thoughts at the beginning is we needed to spend $1 million at Legion-Keener to bring it to the level it needs to be at,” he said. “And more than likely, that’s what we’ll spend down there before we complete it.

“I tell everybody, sometimes vision is a bit of a curse. It provides you with a lot of work if you want to see it through. Fred Rogers was very much a visionary in our community, and what we have down there was started because of Rogers-McFeely and I guess I caught that same bug.”