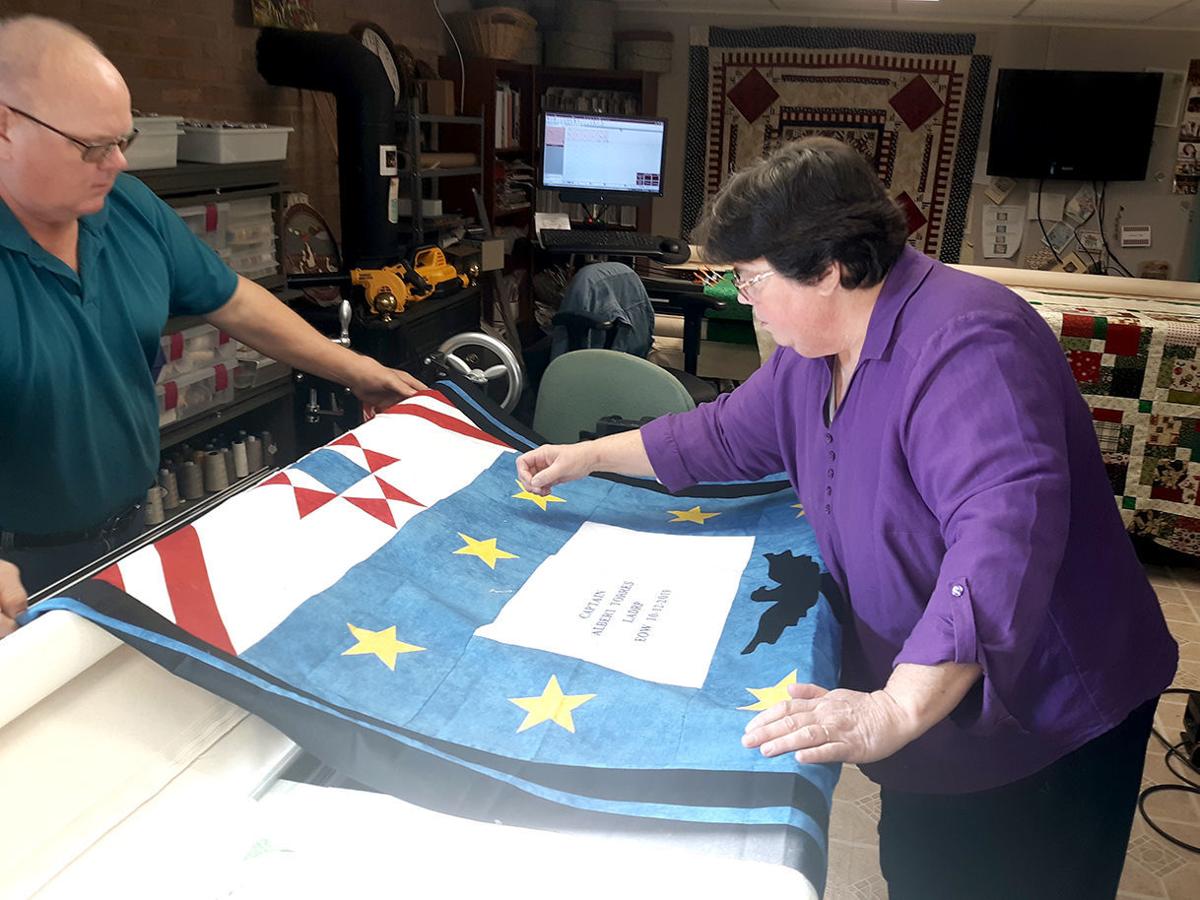 Karen Frye of Blairsville displays a quilt she finished for “A Mother’s Tears,” a national organization that gives quilts to the mothers of fallen police officers. 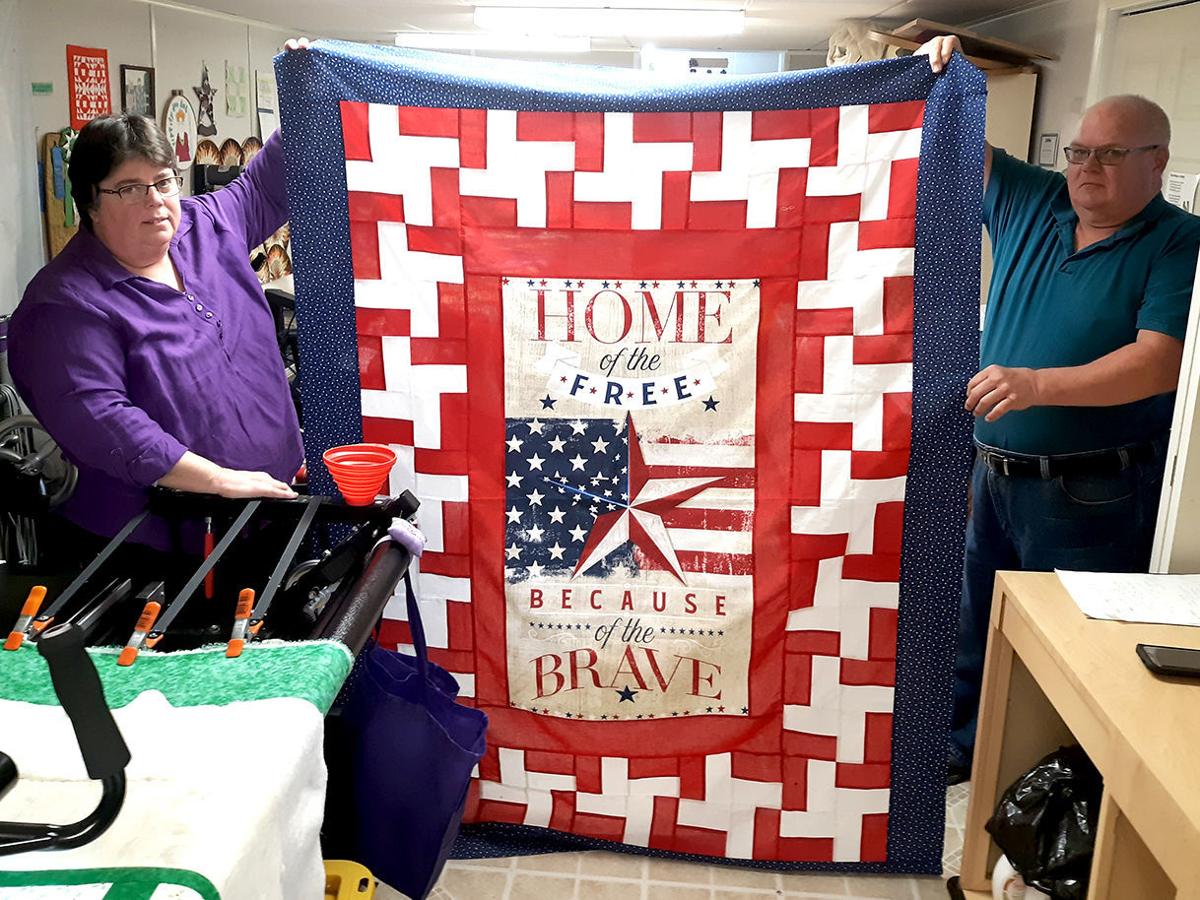 Karen Frye of Blairsville shows one of the “Quilts for Valor” quilts she made recently. “Quilts of Valor” are for anyone who has served during war time. They are red, white and blue in color and display a pattern designed for the individual’s specific involvement and accomplishments during their time of service during a war. 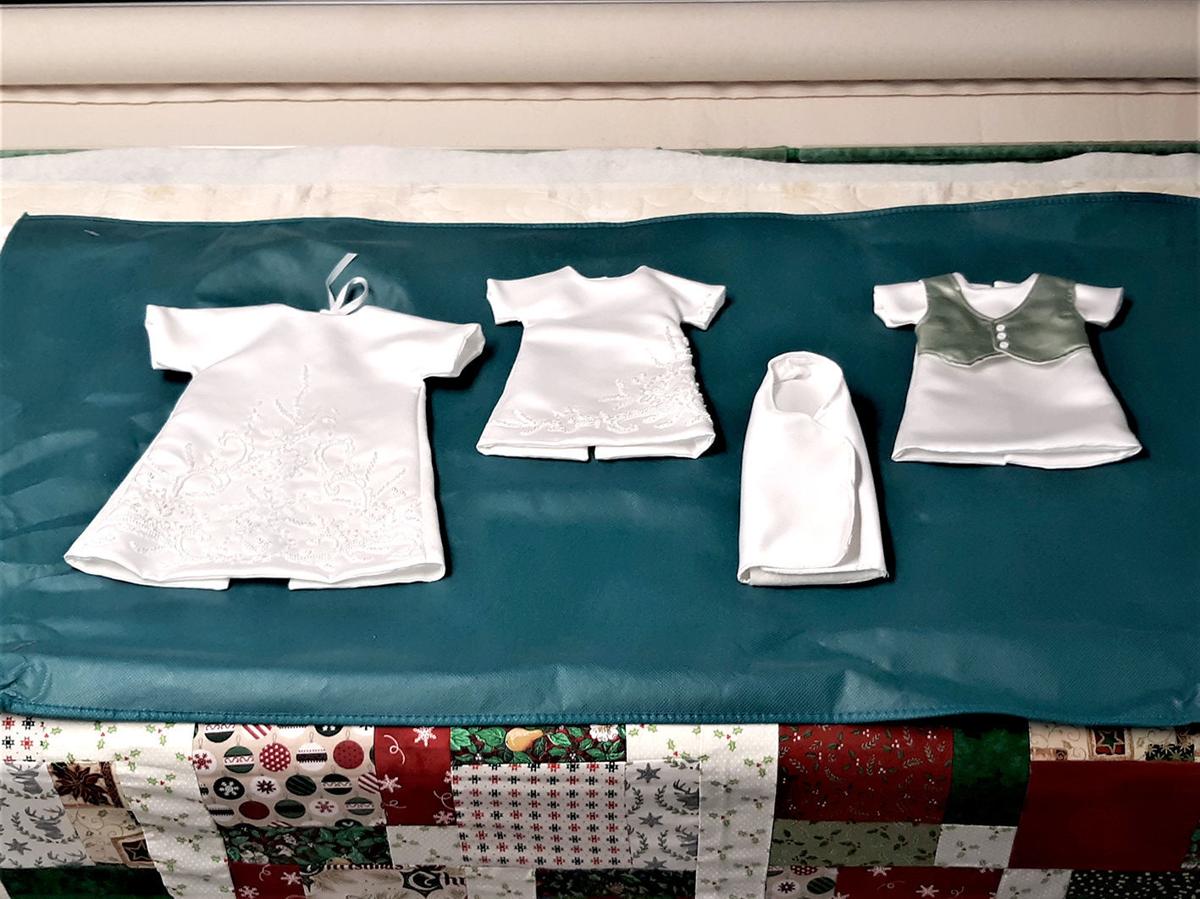 This display of tiny gowns and cocoons for those babies too small and fragile to wear a gown are made from donated wedding gowns. They are made by a Blairsville sewing group for the TEARS Foundation.

Karen Frye of Blairsville displays a quilt she finished for “A Mother’s Tears,” a national organization that gives quilts to the mothers of fallen police officers.

Karen Frye of Blairsville shows one of the “Quilts for Valor” quilts she made recently. “Quilts of Valor” are for anyone who has served during war time. They are red, white and blue in color and display a pattern designed for the individual’s specific involvement and accomplishments during their time of service during a war.

This display of tiny gowns and cocoons for those babies too small and fragile to wear a gown are made from donated wedding gowns. They are made by a Blairsville sewing group for the TEARS Foundation.

Karen Frye’s talent for quilting and her love for her country have led her to a fulfilling hobby that has truly become a labor of love for the Blairsville resident.

She and her husband, Bill, operate Quilting on the Farm out of their basement. In addition to offering quilting services to the public, she donates her talent to helping several organizations including “A Mother’s Tears” and “Quilts of Valor.”

Frye’s interest in quilting began in 1976, shortly after graduation from Derry Area High School. While waiting to enter the U.S. Air Force, she signed up for a quilting class to learn how to hand piece a baby quilt.

After the Air Force, she worked as a police traffic officer in North Carolina for 13 years.

“While I was employed at the police department, we had six officers killed in the line of duty,” Frye said. “That just stuck with me over the years.”

Frye moved back to the Blairsville area in 1997, where she married her husband and helped him manage a 200-acre beef farm.

Bill Frye also graduated from Derry Area High School in 1976 and retired from teaching Earth/Space science at Mount Pleasant Area Junior-High School in 1992. Although they went to the same school and participated in the same activities growing up, they did not begin dating until they attended their 20th high school reunion together in 1996.

“After I moved back here and got married, I started picking up my quilting again. I had a bunch of quilt tops done that needed quilting. But, instead of hand quilting them I looked into machine quilting them,” Frye said.

What began as a hobby when she was a teenager soon blossomed unexpectedly into a business in 2006 when Frye purchased her first piece of quilting equipment, a Statler 14-foot Gammill machine. She now has three Statler long arm machines working non-stop nearly every day in the couple’s basement workshop.

The couple established “Quilting on the Farm” in 2006, after taking a 14-store shop hop through western Pennsylvania.

“Bill and I went on these excursions and we ended up buying the Statler quilter with the Gammill computer,” she said.

After visiting several quilt shops to inspect quilting machines, they decided to purchase a long arm machine, which quilted all on its own with the finesse of a surgeon suturing a wound.

“My thinking was to buy one for Karen and let it quilt while she helped me on the farm,” said Bill Frye. “But two months later, as a new long arm machine owner, Karen had more quilting customers than I could ever have imagined possible — so much for helping me on the farm.”

Frye’s passion for anything quilted soon led her to lending her talent to local charitable causes.

She is a member of the “Loyal Hannahs Quilt Guild” in Saltsburg and voluntarily quilts for “A Mother’s Tears,” a national organization that gives quilts to the mothers of fallen police officers; “Quilts of Valor” for the Armed Forces, and requests from the Red Cross and local animal shelters.

Although she is not a member of “Quilts for Valor” she said she volunteers quilting service for the organization. The “Quilts of Valor” are for anyone who has served during war time. They are red, white and blue in color and display a pattern designed for the individual’s specific involvement and accomplishments during their time of service during a war.

Frye lent her quilting services to “A Mother’s Tears” organization after reading an article in a quilt magazine about a need for quilts for wounded and deceased police officers.

“I look up the fallen officer on line and try to find something special to add to the quilt to honor them,” she said.

Frye said she made quilts for all of the local officers who died in the line of duty, including Ligonier Township police Lt. Eric Eslary.

“I subscribe to the Officer Down Memorial page. They send me alerts every time an officer is killed in the line of duty,” she said. “I get the same alerts through ‘A Mother’s Tears’ and if I see a name from Pennsylvania law enforcement, I will do the quilts for them as well as officers in Winston Salem, North Carolina, where I used to live and work.”

She said most of the time, the quilts are already pre-pieced but she does design her own, if needed.

There is a specific “Mother’s Tears” pattern and a special label with a poem on the back presenting it to the officer’s mother or family member.

The poem, “A quilt to hold a mother’s tears will help to mend her broken heart,” goes on the back of every quilt.

As a former police officer, Frye said when she gets a call to make a fallen officer quilt, she must do her part to honor them.

“After looking up ‘A Mother’s Tears’ group, I thought, ‘Boy this is what I want to do,’” Frye said. “I just feel like I need to do something give to these guys that are out there every day. I know what they are up against, because I have done it. I just want to give back to the families at least and acknowledge their sacrifice.”

Frye has completed at least 20 quilts since 2014 for the group. After she completes the quilting process, the quilts are given to Mim Zubalik in Blairsville to add the binding before returning the quilt to “A Mother’s Tears” group.

“I have a team of volunteers from the Loyal Hannas Quilt Guild group I can rely on to help whenever I need them,” she said.

They are a service guild and make items for fire victims and make quilts for fire departments, dog rescue groups and senior centers to raffle to raise funds. The guild made and donated 20 quilts for a group in Nicaragua and children who are victims of AIDS in Africa.

“I have been so blessed with having the ability to do this. When I bought this machine I said it would be my charity machine. I planned to always have one machine available for charity work,” she said.

In addition to the three Statler Stitchers that now occupy the Frye basement, they also sell the innovative machines to customers.

“Our business dealings give us the opportunity to donate or sell at cost ‘charity’ batting to various nonprofit groups and individuals,” Bill Frye said.

She said she has more than 26,000 patterns to choose from for the designs on the quilts.

In addition to the quilt work, Frye said she recently joined a new service project sewing group in Blairsville.

“We were approached by a group called TEARS, for gowns that lost their babies prematurely at the hospital,” she said. “They asked us if we could make clothing for these infants lost during pregnancy or at birth.”

The tiny gowns and outfits are made from wedding gowns.

“People can donate their wedding dresses and we cut them up to make these tiny dresses and cocoons for the babies too small for a dress,” Frye said.

Paige Green of Latrobe and Cindy Zajdel of Blairsville are the coordinators of the Pennsylvania Chapter of the TEARS Foundation, which serves families who experience pregnancy or infant loss in the state.

“Anywhere I find there is a need for something, I try to meet that need or get people to help me get it accomplished,” Frye said.

For more information about Quilting on the Farm, go to quiltingonthefarm.com.