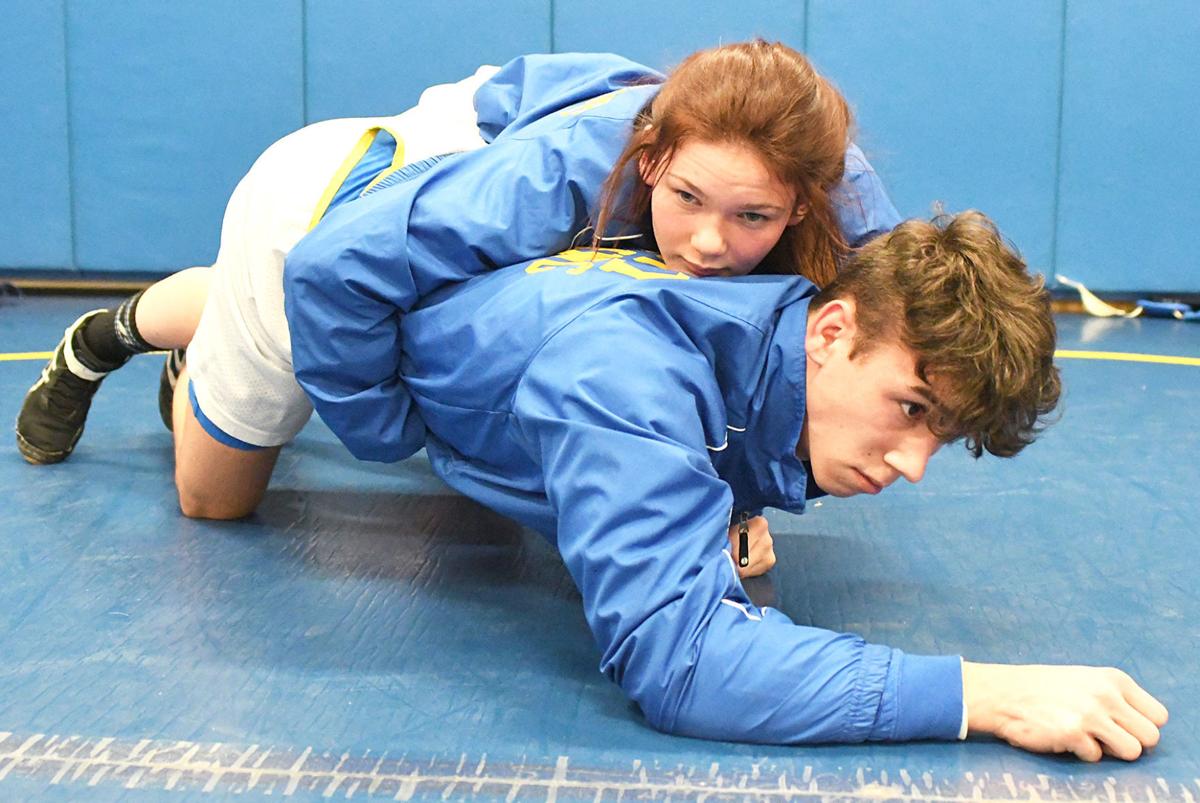 Derry Area’s Bethany Allen breaks down Paul Kuhn, a foreign exchange student from Germany, in warmups prior to a recent wrestling match. A senior, Allen decided to come out for the sport and has wrestled in four matches this season.

At Eastern Westmoreland Career and Technology Center (EWCTC) in Derry Township, Bethany Allen has become one of the guys.

So it should come as no surprise that Allen’s also doing something else that’s associated almost exclusively with males...at least around here.

Allen is a senior at Derry Area High School. And she’s more than just a member of the team.

“She’s already going against the odds in welding, so bringing her into wrestling is nothing different,” explained Derry Area head coach Mike Weinell, who’s also an instructor at EWCTC in another field. “She’s a tough kid.

“She works hard. She’s in the room every day. She doesn’t complain.

“Actually, I think sometimes she’s mentally tougher than the boys, just because she has to be. She knows her back’s against the wall because she’s a girl participating in a predominantly male sport.

“She’s doing all the right things. It’s just unfortunate that she’s a senior and we’ll only have the one year with her.”

This is Allen’s one and only season with the Trojans. And after finally giving it a shot, Allen wishes she had done so earlier.

“I really wish I would’ve joined the program when I was a freshman, or even before that,” Allen expressed. “But I was always too scared.

“I just talked to my coach at (EWCTC), and he encouraged me. So I just said that I was going to do it.”

Allen became interested in the sport watching younger sister Destiny, now a junior, wrestle in seventh and eighth grade. She’s been around the sport ever since, but only decided to come out for wrestling for the first time this season.

“I really like it,” Allen related. “The guys have helped me a lot, so this year, I just thought, ‘Why not?’”

“She’s always followed the team,” Weinell noted. “And there are a few guys on the team who are in her welding class, and we see each other all the time.

“She just felt like she wanted to be a part of it. And since her sister wrestled in middle school, that helped, too.

“What’s the worst that can happen? I just told her to give it a try.”

Well, Allen did this year. She’s also wrestled in four matches this season, and even though they’ve resulted in losses, one of them was by a two-point decision in the first round of the 113-pound consolations at the recent Westmoreland County Coaches Association tournament.

“It’s all about experience. It’s a lot harder than going against girls,” Allen deduced.

“We’re pretty happy with her,” Weinell added. “She battles, and that’s all I can ask from her.

“And she’s actually become a little bit of a leader in the (practice) room, too. I told our guys that that’s what we all have to do.

“I can push her and she doesn’t quit or back down. The only drawback sometimes is I use that against the guys, but it’s all for everyone’s benefit.”

Allen is the first female wrestler in Weinell’s 18 years of coaching at the high school and middle school levels, and believed to be the first ever on the varsity at Derry Area. If he has his way, she might not be the last, either, and that goes for Allen’s sister.

“It’s unfortunate her sister didn’t come out this season,” Weinell remarked. “We could’ve had two years with her (Destiny). And if we had a few more come out, I’d be happy with that, too.

“It’s about recruiting and getting people interested in wrestling. It doesn’t matter whether it’s boys or girls.”

As for the rest of the season, which for Derry Area consists of its final section dual match on Wednesday in an attempt to get into the team playoffs followed by individual competition, Allen’s goals are simple.

“To get better and win,” she responded.

To wit, DA’s Allen isn’t the only girl wrestling on a boys’ team in the area. Riley Stoner is doing so as a senior at Greensburg Salem.

Stoner is wrestling at 120 for the Golden Lions and, as of now, actually has a winning career record against her male counterparts.

Stoner did just that in a match earlier last week when she pinned her opponent from Woodland Hills. Last year, Stoner won a girls’ high school state title at 128 pounds and will be on scholarship in the fall at NCAA Division II Gannon University in Erie.

“She’s going out there with the boys, so when she wrestles a girl, she’s not losing, because she’s much stronger than they are,” Parsley said. “She has the advantage over most girls, because most girls won’t wrestle the boys.”

Except for Allen, that is.