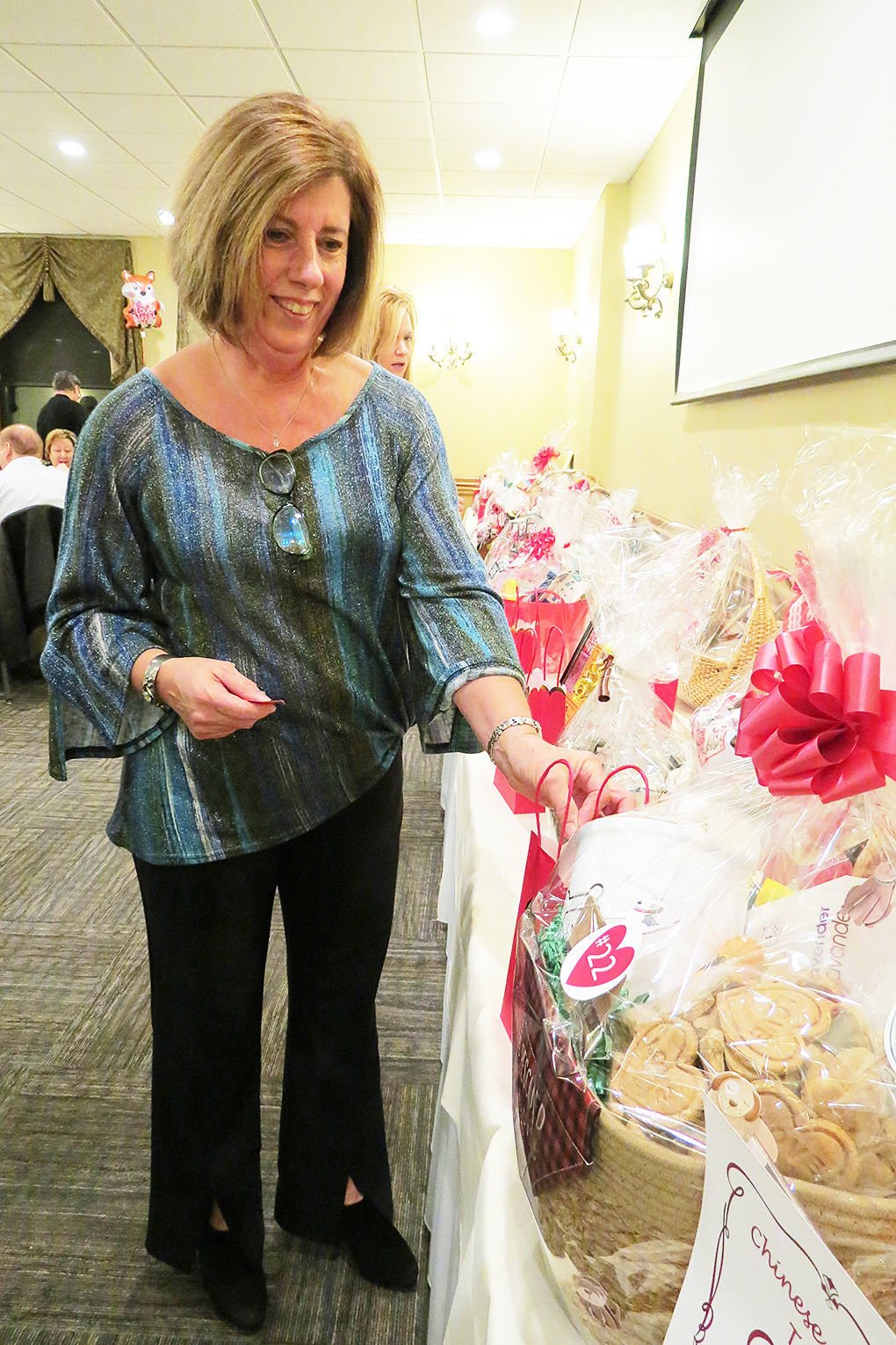 Malinda Sherid distributes tickets for items that she hopes to win in one of the auctions. 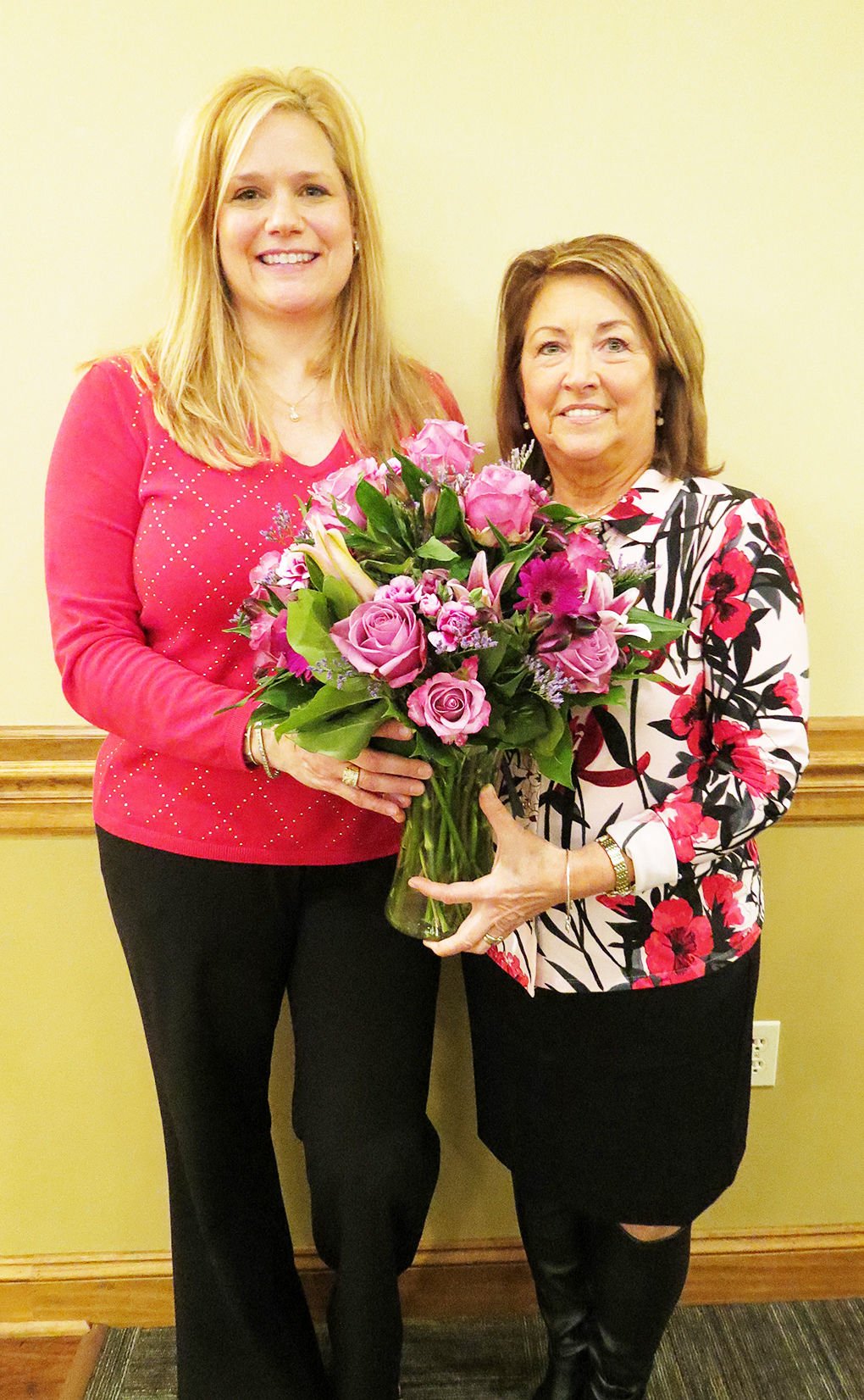 Lisa Marie Corcoran presented Karen Thompson Highlands with a bouquet of flowers and an engraved brick on behalf of AFA’s gratitude for the support that Highlands brings through a fund established in memory of her daughter. 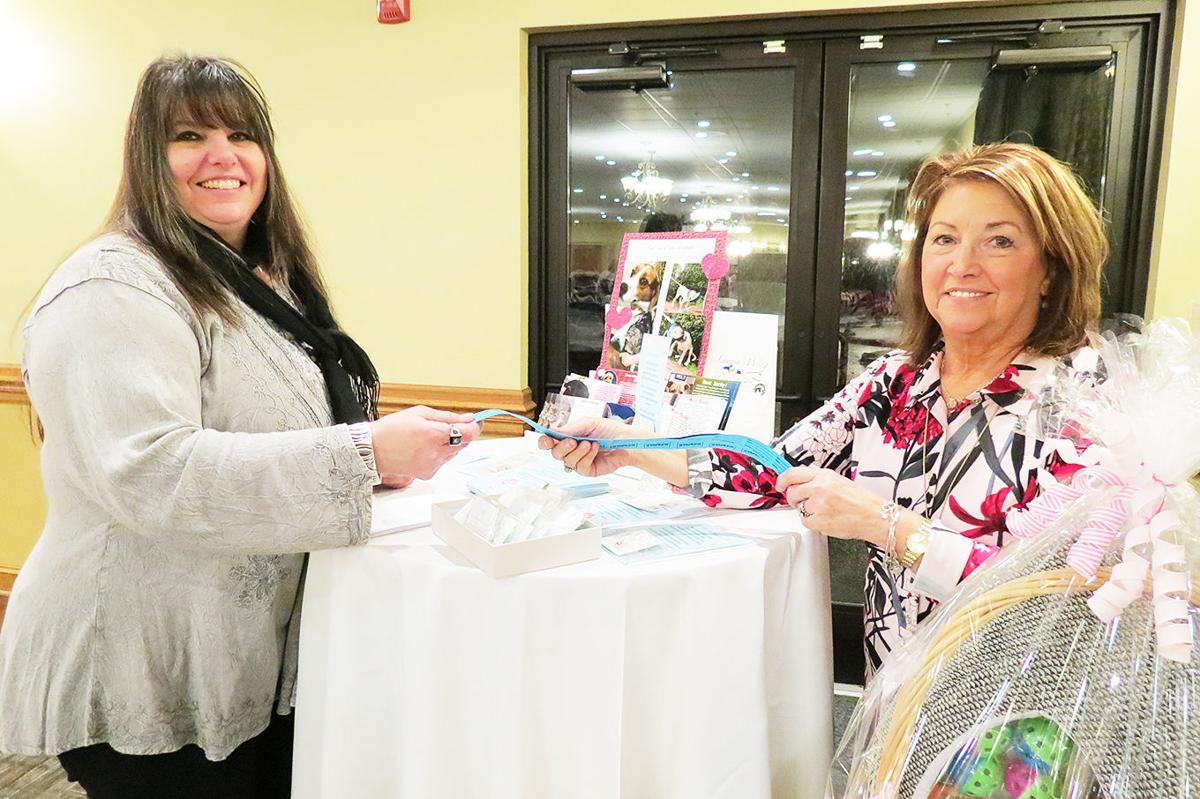 Malinda Sherid distributes tickets for items that she hopes to win in one of the auctions.

Lisa Marie Corcoran presented Karen Thompson Highlands with a bouquet of flowers and an engraved brick on behalf of AFA’s gratitude for the support that Highlands brings through a fund established in memory of her daughter.

Tabatha was a stray cat who had to have her eye removed, and another cat named Riviera was so injured that her leg had to be amputated. Marley came from West Virginia with a leg injury, and Liam was hit by a car. Maytor, who suffered gunshot wounds, had pins put in his back and his leg. Skylar was hit by a car, and Jasper was rescued from a hoarding situation and needed hernia repair surgery.

Their photos and stories were part of a slide show featured Saturday night at Action For Animals Humane Society’s 14th annual Love Is In the Air fundraiser at Rizzo’s in Crabtree.

“All of this is because of Lauren’s Wing,” said AFA board president Lisa Marie Corcoran of Unity Township, who co-chaired the event with board member Robin Grace of Ligonier.

The presentation was a surprise to Karen Thompson Highlands, founder of Lauren’s Wing, The Fund For Animal Care.

“We couldn’t do this without her,” Corcoran said.

Highlands founded Lauren’s Wing in memory of her daughter Lauren Thompson, who died in 2011 from injuries sustained in a vehicular crash. She loved animals from a very early age, and her mother wanted to do something for animals to honor her. The fund was established in 2013, and since then has helped 58 animals in need of emergency and specialty care.

Shelter manager and executive director LuAnn Hutcheson responds to emergency situations that the fund supports. Animals in need might be very ill or injured, and can be from local or regional areas, or out of state. Pittsburgh Aviation and Animal Rescue flew Maytor from West Virginia to Latrobe.

“I want to recognize and thank Karen for partnering with AFA to help these animals in need,” Corcoran said. “Due to the high expense of surgery, these animals would not have had a second chance without Lauren’s Wing. Our presentation highlighted the faces and stories behind the recipients, and I think it’s important to show our supporters where their donations go.”

Corcoran presented Highlands with a bouquet of flowers and an engraved paving brick for the sidewalk in front of AFA’s shelter in Derry Township.

“It’s an honor to partner with AFA,” Highlands said. “I get to see first-hand how they go the extra mile with the animals.”

She noted how much Lauren loved animals, and how at a very young age her daughter had a prayer that she said every night: “Dear Lord, please protect all creatures great and small that have no words.”

Corcoran thanked the people who attend the fundraisers and who in other ways support the shelter and Lauren’s Wing. AFA has an annual budget of $900,000 and lodges more than 150 animals on any given day. Revenue comes from donations, adoption fees, veterinary clinic services and monthly shot clinics. Fundraisers are crucial, too.

Malinda Sherid of Hempfield Township came with her husband, John. It was their first time at Love Is In The Air, but they have been supporting Lauren’s Wing for years. They previously held Second Chance Walks in memory of Sherid’s first husband, Fred, who died from a heart attack at a young age, and Sherid and Fred’s teenage daughter Kim, who died from injuries in a crash. The Sherids donated proceeds to Lauren’s Wing.

Sherid is Highlands’ sister-in-law, and the two women share not only the tragic losses of their loved ones, but also their love of animals.

Avonlea Gergley and her husband, Blaine, of Rostraver attended the event for the first time.

“I saw it advertised on Facebook, and since it’s around Valentine’s Day and around my birthday, I thought that we could do this, that instead of going out, we could give back.”

Lori Harr of Rector has four dogs that she got “from people who didn’t want them.” She became familiar with AFA through their low-cost spay and neuter clinics and their shot clinics.

“I love dogs and cats and all animals,” she said. “They give you unconditional love, and how can you not support the people who support them?”

AFA has a team of volunteers who perform many services that include cleaning kennels, walking the dogs, playing with the cats and in other ways helping the staff with the day-to-day operations. Some of the volunteers assist at different events.

Brandy Rudy of Unity Township volunteers at the shot clinics and the fundraisers.

“I like to do anything I can to help the animals,” she said. “I’ve made friendships here that I wouldn’t have if I didn’t volunteer. They are really good people who do whatever it takes to help.”

Corcoran invited supporters to visit the shelter even if they aren’t planning to adopt a pet.

“Stop by and play with the cats and meet the dogs,” she said. “You will see where each and every dollar helps.”

A number of sponsors underwrote the event and individuals and local businesses donated auction and raffle prizes. For information, visit afashelter.org and LaurensWing.org.