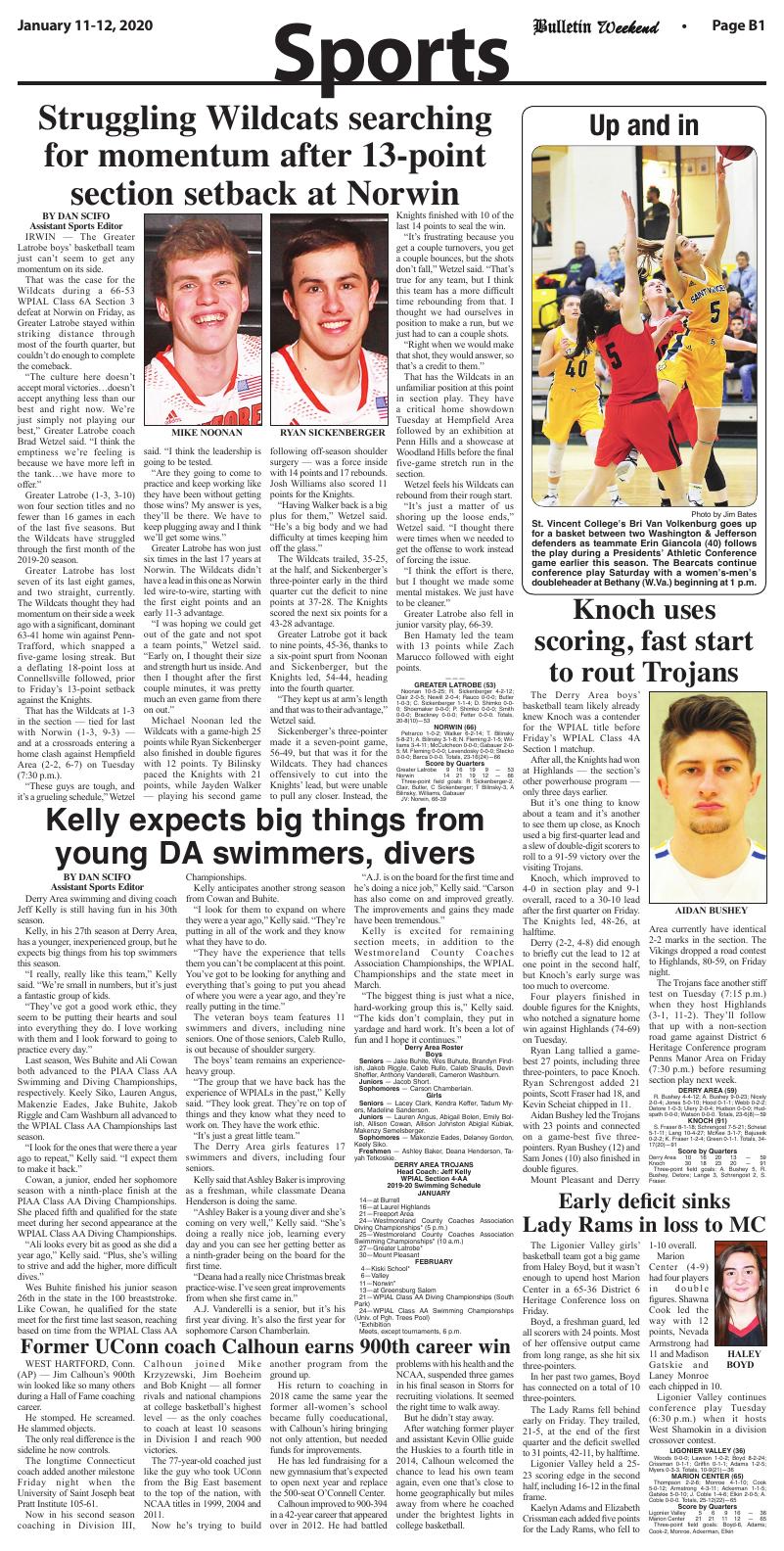 IRWIN — The Greater Latrobe boys’ basketball team just can’t seem to get any momentum on its side.

That was the case for the Wildcats during a 66-53 WPIAL Class 6A Section 3 defeat at Norwin on Friday, as Greater Latrobe stayed within striking distance through most of the fourth quarter, but couldn’t do enough to complete the comeback.

“The culture here doesn’t accept moral victories…doesn’t accept anything less than our best and right now. We’re just simply not playing our best,” Greater Latrobe coach Brad Wetzel said. “I think the emptiness we’re feeling is because we have more left in the tank…we have more to offer.”

Greater Latrobe (1-3, 3-10) won four section titles and no fewer than 16 games in each of the last five seasons. But the Wildcats have struggled through the first month of the 2019-20 season.

Greater Latrobe has lost seven of its last eight games, and two straight, currently. The Wildcats thought they had momentum on their side a week ago with a significant, dominant 63-41 home win against Penn-Trafford, which snapped a five-game losing streak. But a deflating 18-point loss at Connellsville followed, prior to Friday’s 13-point setback against the Knights.

“These guys are tough, and it’s a grueling schedule,” Wetzel said. “I think the leadership is going to be tested.

“Are they going to come to practice and keep working like they have been without getting those wins? My answer is yes, they’ll be there. We have to keep plugging away and I think we’ll get some wins.”

Greater Latrobe has won just six times in the last 17 years at Norwin. The Wildcats didn’t have a lead in this one as Norwin led wire-to-wire, starting with the first eight points and an early 11-3 advantage.

“I was hoping we could get out of the gate and not spot a team points,” Wetzel said. “Early on, I thought their size and strength hurt us inside. And then I thought after the first couple minutes, it was pretty much an even game from there on out.”

Michael Noonan led the Wildcats with a game-high 25 points while Ryan Sickenberger also finished in double figures with 12 points. Ty Bilinsky paced the Knights with 21 points, while Jayden Walker — playing his second game following off-season shoulder surgery — was a force inside with 14 points and 17 rebounds. Josh Williams also scored 11 points for the Knights.

“Having Walker back is a big plus for them,” Wetzel said. “He’s a big body and we had difficulty at times keeping him off the glass.”

The Wildcats trailed, 35-25, at the half, and Sickenberger’s three-pointer early in the third quarter cut the deficit to nine points at 37-28. The Knights scored the next six points for a 43-28 advantage.

Greater Latrobe got it back to nine points, 45-36, thanks to a six-point spurt from Noonan and Sickenberger, but the Knights led, 54-44, heading into the fourth quarter.

“They kept us at arm’s length and that was to their advantage,” Wetzel said.

Sickenberger’s three-pointer made it a seven-point game, 56-49, but that was it for the Wildcats. They had chances offensively to cut into the Knights’ lead, but were unable to pull any closer. Instead, the Knights finished with 10 of the last 14 points to seal the win.

“It’s frustrating because you get a couple turnovers, you get a couple bounces, but the shots don’t fall,” Wetzel said. “That’s true for any team, but I think this team has a more difficult time rebounding from that. I thought we had ourselves in position to make a run, but we just had to can a couple shots.

“Right when we would make that shot, they would answer, so that’s a credit to them.”

That has the Wildcats in an unfamiliar position at this point in section play. They have a critical home showdown Tuesday at Hempfield Area followed by an exhibition at Penn Hills and a showcase at Woodland Hills before the final five-game stretch run in the section.

Wetzel feels his Wildcats can rebound from their rough start.

“It’s just a matter of us shoring up the loose ends,” Wetzel said. “I thought there were times when we needed to get the offense to work instead of forcing the issue.

“I think the effort is there, but I thought we made some mental mistakes. We just have to be cleaner.”

Derry Area swimming and diving coach Jeff Kelly is still having fun in his 30th season.

Kelly, in his 27th season at Derry Area, has a younger, inexperienced group, but he expects big things from his top swimmers this season.

“I really, really like this team,” Kelly said. “We’re small in numbers, but it’s just a fantastic group of kids.

“They’ve got a good work ethic, they seem to be putting their hearts and soul into everything they do. I love working with them and I look forward to going to practice every day.”

“I look for the ones that were there a year ago to repeat,” Kelly said. “I expect them to make it back.”

“Ali looks every bit as good as she did a year ago,” Kelly said. “Plus, she’s willing to strive and add the higher, more difficult dives.”

Wes Buhite finished his junior season 26th in the state in the 100 breaststroke. Like Cowan, he qualified for the state meet for the first time last season, reaching based on time from the WPIAL Class AA Championships.

Kelly anticipates another strong season from Cowan and Buhite.

“I look for them to expand on where they were a year ago,” Kelly said. “They’re putting in all of the work and they know what they have to do.

“They have the experience that tells them you can’t be complacent at this point. You’ve got to be looking for anything and everything that’s going to put you ahead of where you were a year ago, and they’re really putting in the time.”

The veteran boys team features 11 swimmers and divers, including nine seniors. One of those seniors, Caleb Rullo, is out because of shoulder surgery.

“The group that we have back has the experience of WPIALs in the past,” Kelly said. “They look great. They’re on top of things and they know what they need to work on. They have the work ethic.

Kelly said that Ashley Baker is improving as a freshman, while classmate Deana Henderson is doing the same.

“Ashley Baker is a young diver and she’s coming on very well,” Kelly said. “She’s doing a really nice job, learning every day and you can see her getting better as a ninth-grader being on the board for the first time.

“Deana had a really nice Christmas break practice-wise. I’ve seen great improvements from when she first came in.”

A.J. Vanderelli is a senior, but it’s his first year diving. It’s also the first year for sophomore Carson Chamberlain.

“A.J. is on the board for the first time and he’s doing a nice job,” Kelly said. “Carson has also come on and improved greatly. The improvements and gains they made have been tremendous.”

Kelly is excited for remaining section meets, in addition to the Westmoreland County Coaches Association Championships, the WPIAL Championships and the state meet in March.

“The biggest thing is just what a nice, hard-working group this is,” Kelly said. “The kids don’t complain, they put in yardage and hard work. It’s been a lot of fun and I hope it continues.” 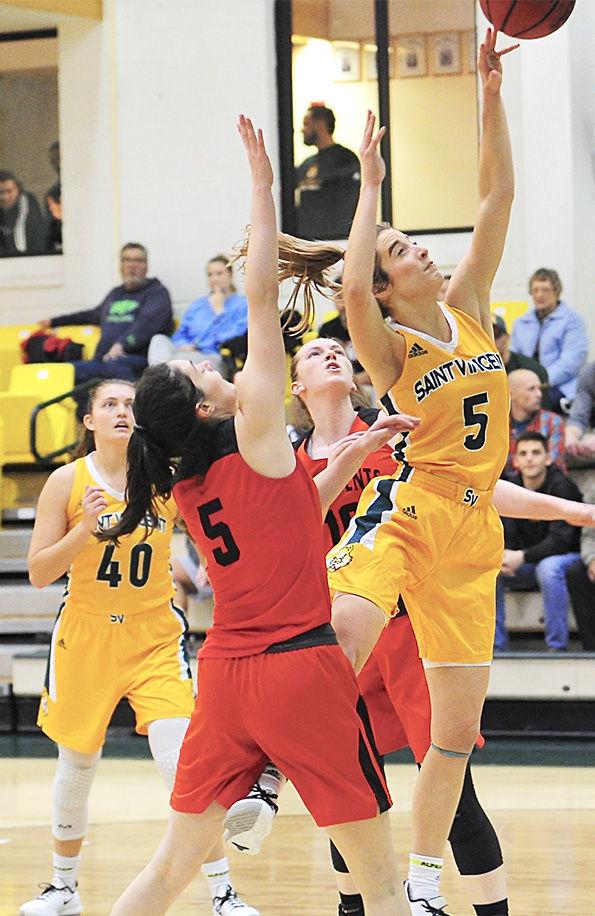 After all, the Knights had won at Highlands — the section’s other powerhouse program — only three days earlier.

But it’s one thing to know about a team and it’s another to see them up close, as Knoch used a big first-quarter lead and a slew of double-digit scorers to roll to a 91-59 victory over the visiting Trojans.

Derry (2-2, 4-8) did enough to briefly cut the lead to 12 at one point in the second half, but Knoch’s early surge was too much to overcome.

Four players finished in double figures for the Knights, who notched a signature home win against Highlands (74-69) on Tuesday.

Mount Pleasant and Derry Area currently have identical 2-2 marks in the section. The Vikings dropped a road contest to Highlands, 80-59, on Friday night.

The Trojans face another stiff test on Tuesday (7:15 p.m.) when they host Highlands (3-1, 11-2). They’ll follow that up with a non-section road game against District 6 Heritage Conference program Penns Manor Area on Friday (7:30 p.m.) before resuming section play next week.

The Ligonier Valley girls’ basketball team got a big game from Haley Boyd, but it wasn’t enough to upend host Marion Center in a 65-36 District 6 Heritage Conference loss on Friday.

Boyd, a freshman guard, led all scorers with 24 points. Most of her offensive output came from long range, as she hit six three-pointers.

In her past two games, Boyd has connected on a total of 10 three-pointers.

The Lady Rams fell behind early on Friday. They trailed, 21-5, at the end of the first quarter and the deficit swelled to 31 points, 42-11, by halftime.

Ligonier Valley held a 25-23 scoring edge in the second half, including 16-12 in the final frame.

Kaelyn Adams and Elizabeth Crissman each added five points for the Lady Rams, who fell to 1-10 overall.

Marion Center (4-9) had four players in double figures. Shawna Cook led the way with 12 points, Nevada Armstrong had 11 and Madison Gatskie and Laney Monroe each chipped in 10. 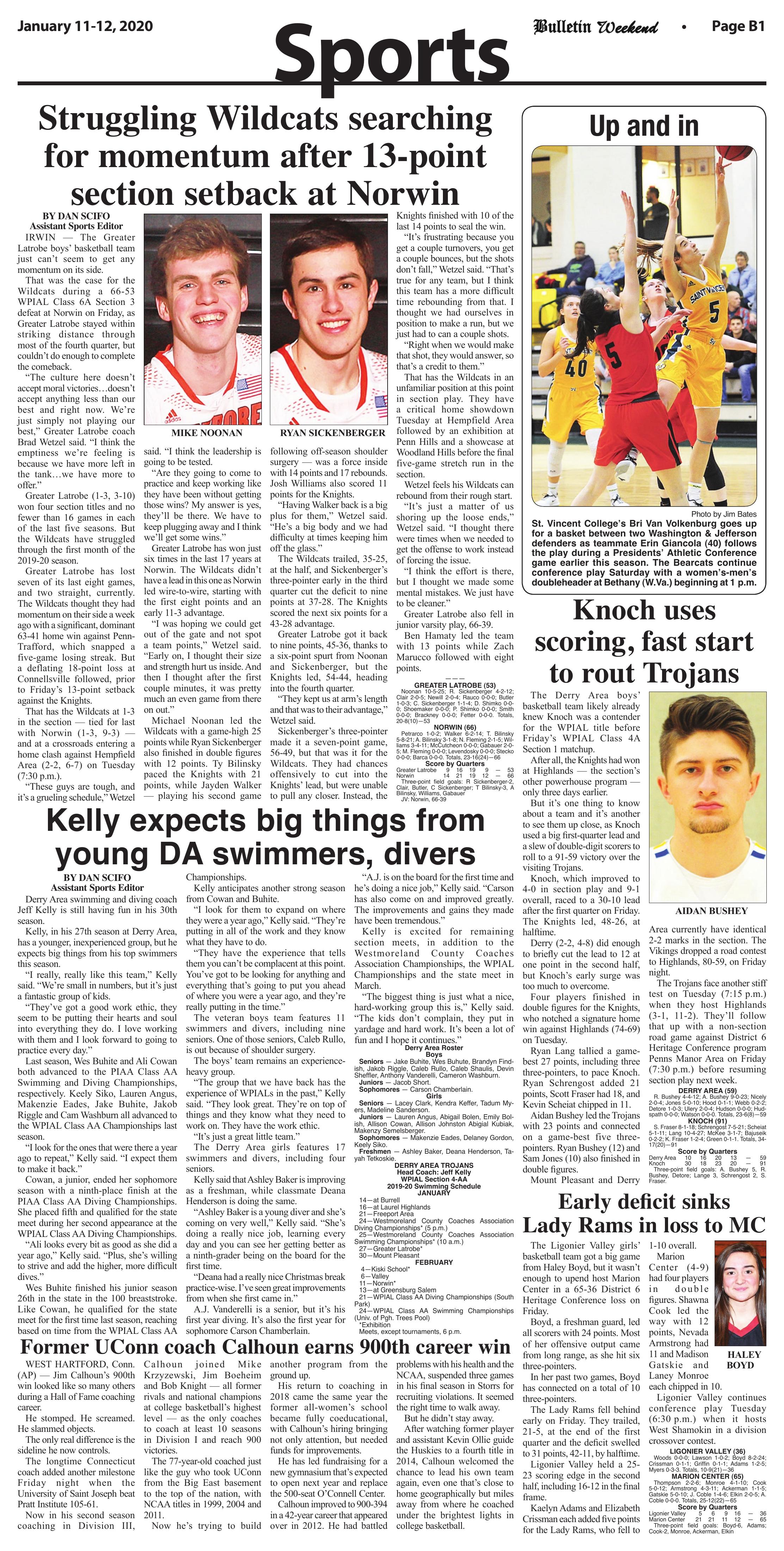