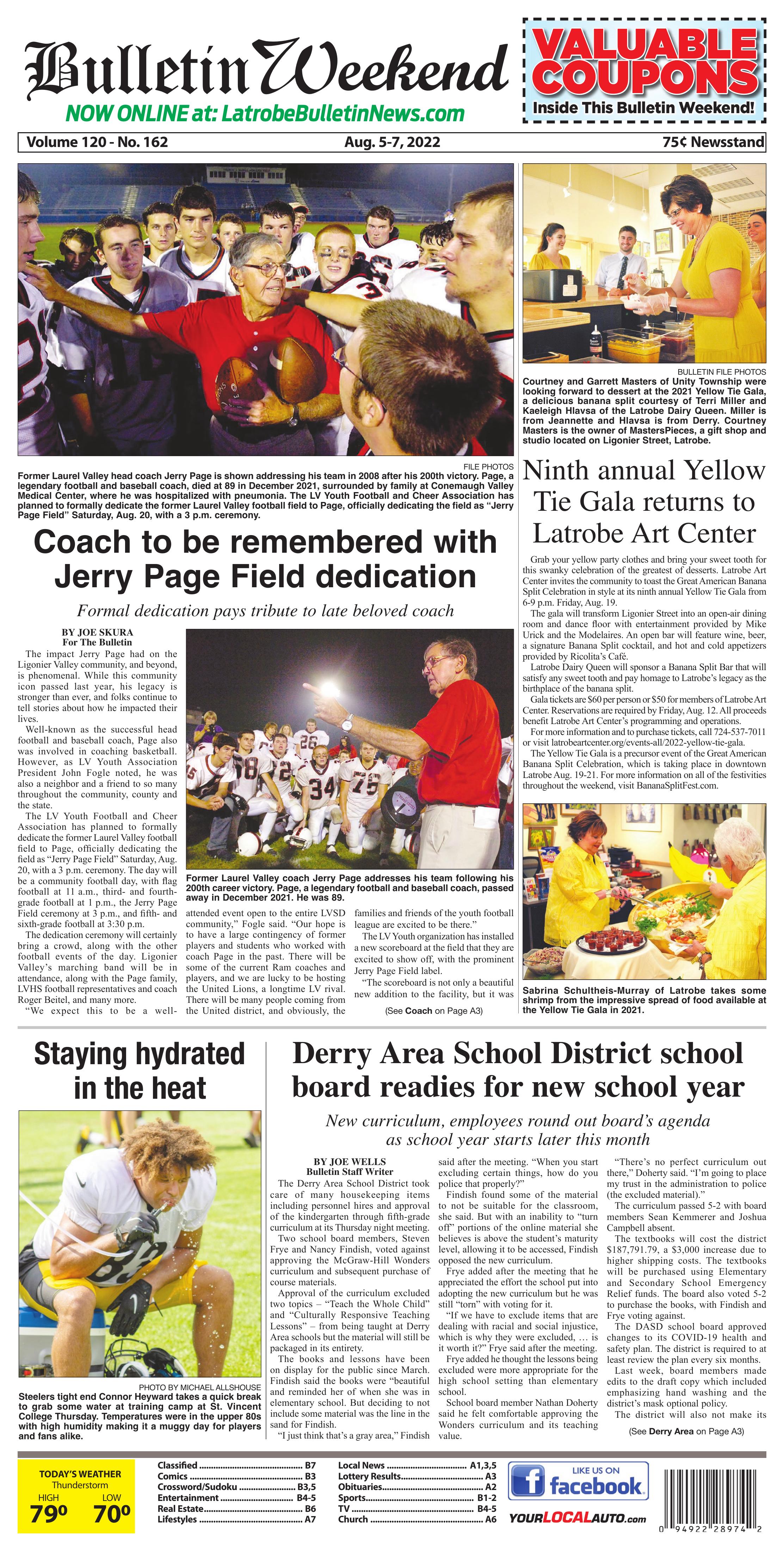 Former Laurel Valley head coach Jerry Page is shown addressing his team in 2008 after his 200th victory. Page, a legendary football and baseball coach, died at 89 in December 2021, surrounded by family at Conemaugh Valley Medical Center, where he was hospitalized with pneumonia. The LV Youth Football and Cheer Association has planned to formally dedicate the former Laurel Valley football field to Page, officially dedicating the field as “Jerry Page Field” Saturday, Aug. 20, with a 3 p.m. ceremony.

The impact Jerry Page had on the Ligonier Valley community, and beyond, is phenomenal. While this community icon passed last year, his legacy is stronger than ever, and folks continue to tell stories about how he impacted their lives.

Well-known as the successful head football and baseball coach, Page also was involved in coaching basketball. However, as LV Youth Association President John Fogle noted, he was also a neighbor and a friend to so many throughout the community, county and the state.

The dedication ceremony will certainly bring a crowd, along with the other football events of the day. Ligonier Valley’s marching band will be in attendance, along with the Page family, LVHS football representatives and coach Roger Beitel, and many more.

“We expect this to be a well-attended event open to the entire LVSD community,” Fogle said. “Our hope is to have a large contingency of former players and students who worked with coach Page in the past. There will be some of the current Ram coaches and players, and we are lucky to be hosting the United Lions, a longtime LV rival. There will be many people coming from the United district, and obviously, the families and friends of the youth football league are excited to be there.”

The LV Youth organization has installed a new scoreboard at the field that they are excited to show off, with the prominent Jerry Page Field label.

“The scoreboard is not only a beautiful new addition to the facility, but it was sorely needed,” Fogel said.

“Coach Page was an institution in our community for many generations of students and athletes,” Fogel said. “At Laurel Valley, he was a teacher, the head coach of football and baseball, and actively involved with the basketball team. While most people knew him for those titles, he was a neighbor and a friend to so many people. You could write a book about the stories from people who knew him. He demanded excellence from everyone he was teaching, but he also had a huge heart and truly cared about everyone he worked with.”

Fogle said Page cultivated a football program that was unrivaled for a small school. “His wins put him in the record books, but when you speak to former Rams, it was the culture that he cultivated and demanded that is remembered,” Fogle explained. “He was a father figure to a lot of students who came through the district. The success translated to the classroom, the field and in life. I think that a testament to him as a coach, and more importantly as a man, was the recognition he received when he passed away in December 2021. He was praised by every local media outlet and lauded by so many other coaches and sportswriters many years after he left the field. Not many area coaches get that kind of treatment.”

The organization has worked with the Page family to put together the Aug. 20 event. The naming of the field after Page became important to many soon after he passed.

“We have been so honored to work with the Page family,” Fogle said. “We are glad they will be in attendance to celebrate his life. While it is sad he is no longer with us, we thought a celebration of his life at a football field with his family, friends, former players and the current football community was a no-brainer.”

Fogle added thanks to the community and supporters of the program. “We can not thank the Ligonier Valley Endowment enough for the full funding of the scoreboard that is adorned with the Jerry Page Field name,” he said. “The Ligonier Valley Endowment provided the funding for desperately needed equipment for our facility that will be used by generations of kids in our district. We can’t put into words how wonderful this organization is and what they do for our community.”

“We also had the Ligonier Valley School District and board’s overwhelming support in naming the field after coach Page and installing the new scoreboard,” Fogle continued. “They unanimously approved both and were very happy with this project. This was just a complete community process that benefits the children in the school district and honors a legendary coach forever. How great is that?”

Jeff Page, the current voice of the Ligonier Valley Rams, said his father’s greatest legacy is the life lessons he taught his players through the sport of football and that his father would be humbled by this tribute. “To be honest, he’d get emotional about it,” Jeff said. “Mom is thrilled that he is being honored and remembered with this incredible gesture.”

Coach Beitel and the Ligonier Valley Rams will begin the day Aug. 20 hosting a 10 a.m. scrimmage with Berlin Brothersvalley at Weller Field before they attend the happenings at Jerry Page Field. Beitel and members of the Rams are honored to be part of the ceremony for Page.

The Derry Area School District took care of many housekeeping items including personnel hires and approval of the kindergarten through fifth-grade curriculum at its Thursday night meeting.

Approval of the curriculum excluded two topics – “Teach the Whole Child” and “Culturally Responsive Teaching Lessons” – from being taught at Derry Area schools but the material will still be packaged in its entirety.

The books and lessons have been on display for the public since March. Findish said the books were “beautiful and reminded her of when she was in elementary school. But deciding to not include some material was the line in the sand for Findish.

“I just think that’s a gray area,” Findish said after the meeting. “When you start excluding certain things, how do you police that properly?”

Findish found some of the material to not be suitable for the classroom, she said. But with an inability to “turn off” portions of the online material she believes is above the student’s maturity level, allowing it to be accessed, Findish opposed the new curriculum.

Frye added after the meeting that he appreciated the effort the school put into adopting the new curriculum but he was still “torn” with voting for it.

“If we have to exclude items that are dealing with racial and social injustice, which is why they were excluded, … is it worth it?” Frye said after the meeting.

Frye added he thought the lessons being excluded were more appropriate for the high school setting than elementary school.

“There’s no perfect curriculum out there,” Doherty said. “I’m going to place my trust in the administration to police (the excluded material).”

The curriculum passed 5-2 with board members Sean Kemmerer and Joshua Campbell absent.

The textbooks will cost the district $187,791.79, a $3,000 increase due to higher shipping costs. The textbooks will be purchased using Elementary and Secondary School Emergency Relief funds. The board also voted 5-2 to purchase the books, with Findish and Frye voting against.

The DASD school board approved changes to its COVID-19 health and safety plan. The district is required to at least review the plan every six months.

Last week, board members made edits to the draft copy which included emphasizing hand washing and the district’s mask optional policy.

The school board amended its agreement with Ligonier Valley Learning Center, Inc. for its PreK Counts Program, granting an additional $47,500 in funding. Superintendent Greg Ferencak said there are approximately 40 seats still available for the upcoming school year.

The price of tuition for Derry Area students attending cyber charter schools will increase again this year. Tuition will increase $751.51 per student this year for a total of $13,763.29. Students with special needs will cost the district $29,278.64 this year – an $830.98 increase from last year.

Cyber charter school tuition has increased for many area districts, including DASD, with reforms to pricing or funding not passing this year at the state Legislature.

The school board approved hiring The Garland Company, Inc. and Non-Destructive Surveys, Inc. to perform a roof scan of Grandview Elementary School. The survey will cost $1,500 and provide the school with an assessment of the roof’s condition, a maintenance plan and cost estimate for any repairs which may be needed.

The DASD school board also approved the following items:

The DASD will have one more meeting before students return to class. The school board will meet again 6:30 p.m. Aug. 25 at the high school audion. The first day of school is Aug. 29. 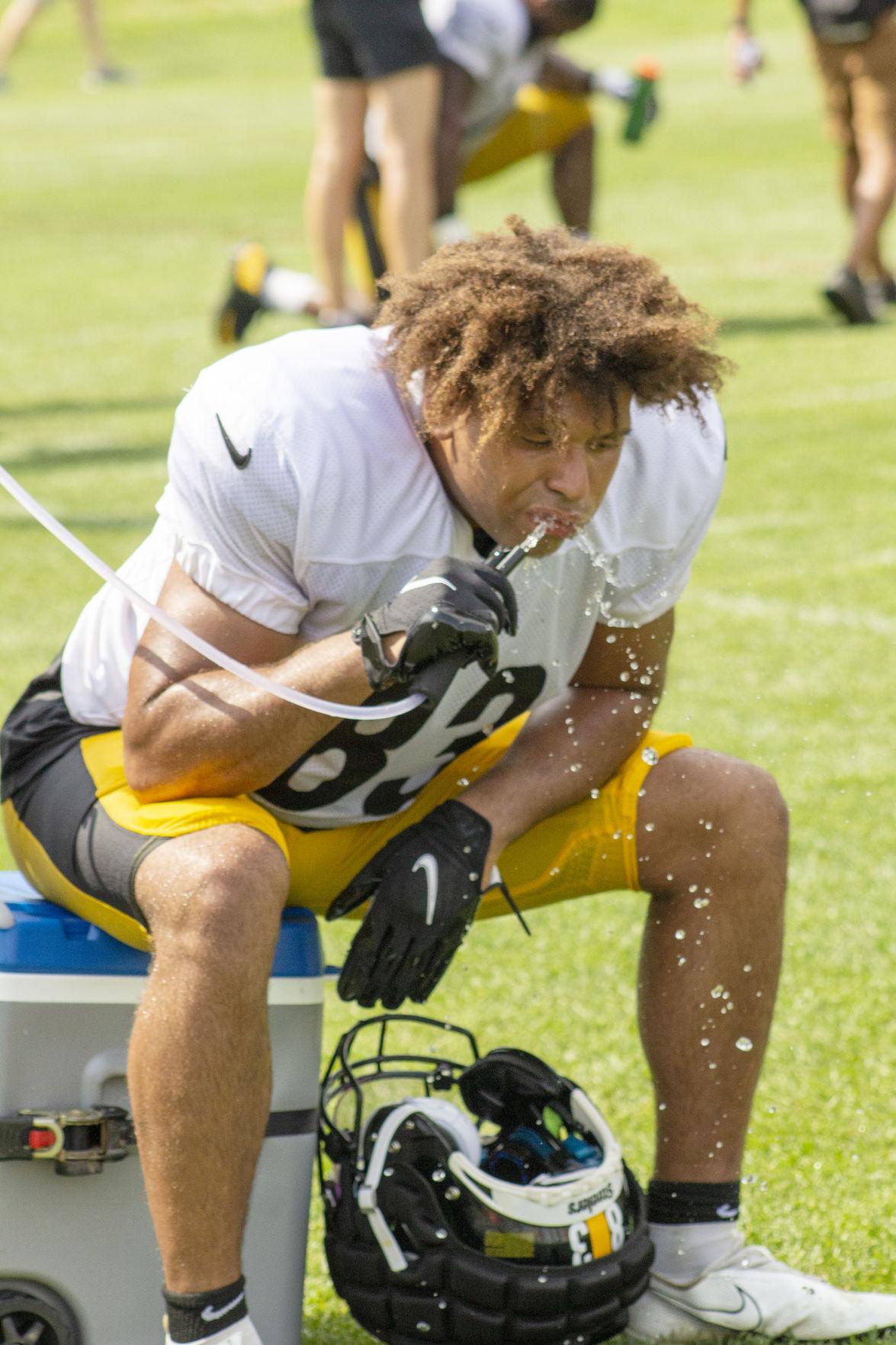 Steelers tight end Connor Heyward takes a quick break to grab some water at training camp at St. Vincent College Thursday. Temperatures were in the upper 80s with high humidity making it a muggy day for players and fans alike.

Sabrina Schultheis-Murray of Latrobe takes some shrimp from the impressive spread of food available at the Yellow Tie Gala in 2021.

Courtney and Garrett Masters of Unity Township were looking forward to dessert at the 2021 Yellow Tie Gala, a delicious banana split courtesy of Terri Miller and Kaeleigh Hlavsa of the Latrobe Dairy Queen. Miller is from Jeannette and Hlavsa is from Derry. Courtney Masters is the owner of MastersPieces, a gift shop and studio located on Ligonier Street, Latrobe.

Brian and Kathy Schmucker of Derry were looking dapper in their banana-colored attire last year at the Yellow Tie Gala.

Grab your yellow party clothes and bring your sweet tooth for this swanky celebration of the greatest of desserts. Latrobe Art Center invites the community to toast the Great American Banana Split Celebration in style at its ninth annual Yellow Tie Gala from 6-9 p.m. Friday, Aug. 19.

The gala will transform Ligonier Street into an open-air dining room and dance floor with entertainment provided by Mike Urick and the Modelaires. An open bar will feature wine, beer, a signature Banana Split cocktail, and hot and cold appetizers provided by Ricolita’s Café.

Latrobe Dairy Queen will sponsor a Banana Split Bar that will satisfy any sweet tooth and pay homage to Latrobe’s legacy as the birthplace of the banana split.

For more information and to purchase tickets, call 724-537-7011 or visit latrobeartcenter.org/events-all/2022-yellow-tie-gala.

The Yellow Tie Gala is a precursor event of the Great American Banana Split Celebration, which is taking place in downtown Latrobe Aug. 19-21. For more information on all of the festivities throughout the weekend, visit BananaSplitFest.com.