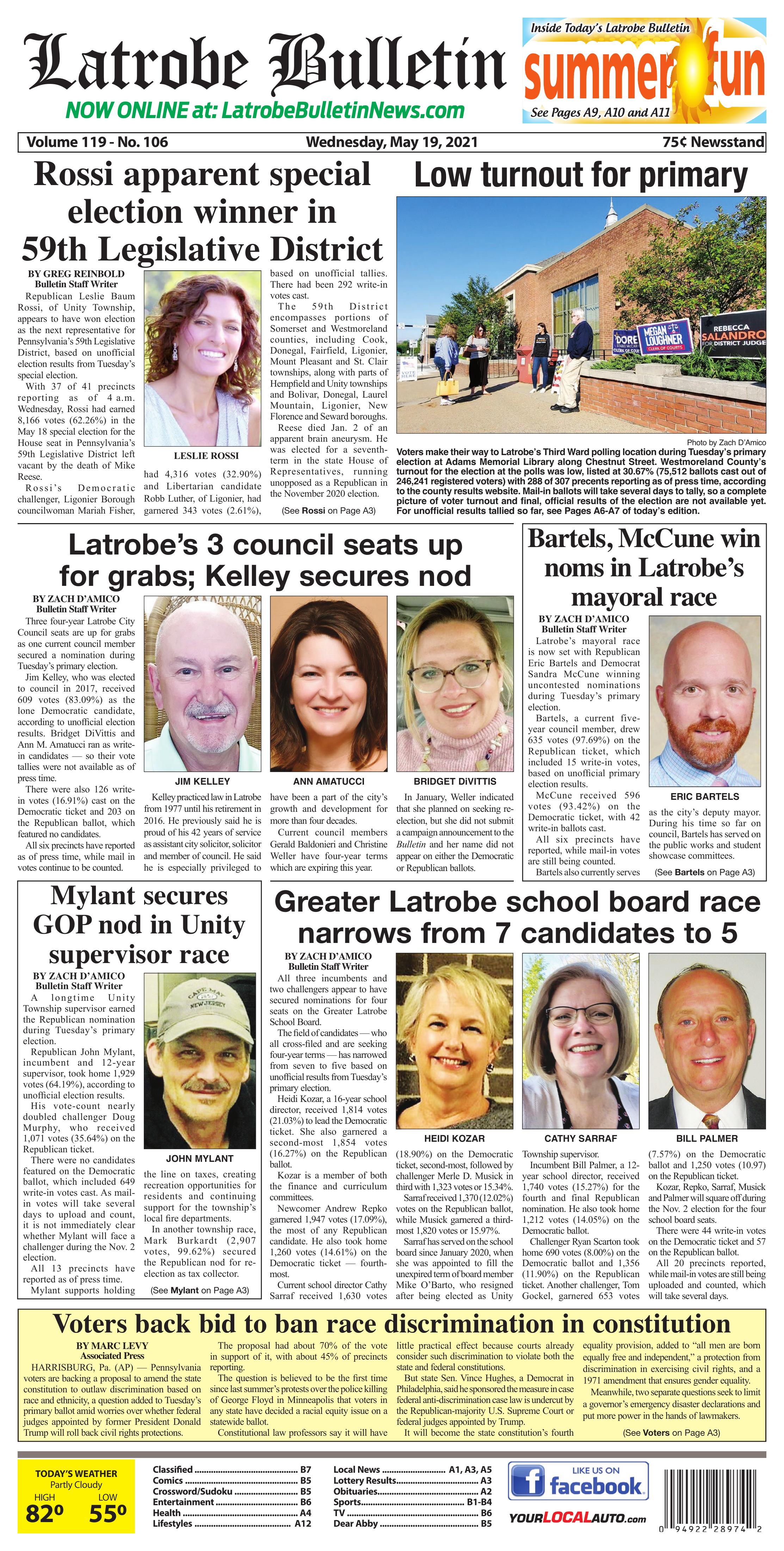 Republican Leslie Baum Rossi, of Unity Township, appears to have won election as the next representative for Pennsylvania’s 59th Legislative District, based on unofficial election results from Tuesday’s special election.

With 37 of 41 precincts reporting as of 4 a.m. Wednesday, Rossi had earned 8,166 votes (62.26%) in the May 18 special election for the House seat in Pennsylvania’s 59th Legislative District left vacant by the death of Mike Reese.

Rossi’s Democratic challenger, Ligonier Borough councilwoman Mariah Fisher, had 4,316 votes (32.90%) and Libertarian candidate Robb Luther, of Ligonier, had garnered 343 votes (2.61%), based on unofficial tallies. There had been 292 write-in votes cast.

Reese died Jan. 2 of an apparent brain aneurysm. He was elected for a seventh-term in the state House of Representatives, running unopposed as a Republican in the November 2020 election.

Rossi, 50, created the red-white-and-blue “Trump House” on Route 982 in Unity Township amid the former president’s 2016 campaign. She helped hundreds register to vote or change their party affiliation up through the 2020 election for which she was a GOP delegate for Trump.

“I believe having spent the amount of time I did on the ground with the voters, I have demonstrated not only my strong work ethic but that I will be the voice of the people as their needs for the district we live in, are my priority,” Rossi wrote in a statement following her party nomination.

Rossi, a mother of eight and business owner, said she is pro-life and a strong supporter of the Second Amendment.

“I love our state and it’s the place we call home. It’s up to us to continue on with our conservative movement and legislators must protect our rights according to the constitution.”

Three four-year Latrobe City Council seats are up for grabs as one current council member secured a nomination during Tuesday’s primary election.

Jim Kelley, who was elected to council in 2017, received 609 votes (83.09%) as the lone Democratic candidate, according to unofficial election results. Bridget DiVittis and Ann M. Amatucci ran as write-in candidates — so their vote tallies were not available as of press time.

There were also 126 write-in votes (16.91%) cast on the Democratic ticket and 203 on the Republican ballot, which featured no candidates.

All six precincts have reported as of press time, while mail in votes continue to be counted.

Kelley practiced law in Latrobe from 1977 until his retirement in 2016. He previously said he is proud of his 42 years of service as assistant city solicitor, solicitor and member of council. He said he is especially privileged to have been a part of the city’s growth and development for more than four decades.

Current council members Gerald Baldonieri and Christine Weller have four-year terms which are expiring this year.

In January, Weller indicated that she planned on seeking re-election, but she did not submit a campaign announcement to the Bulletin and her name did not appear on either the Democratic or Republican ballots.

All three incumbents and two challengers appear to have secured nominations for four seats on the Greater Latrobe School Board.

The field of candidates — who all cross-filed and are seeking four-year terms — has narrowed from seven to five based on unofficial results from Tuesday’s primary election.

Kozar is a member of both the finance and curriculum committees.

Sarraf has served on the school board since January 2020, when she was appointed to fill the unexpired term of board member Mike O’Barto, who resigned after being elected as Unity Township supervisor.

Kozar, Repko, Sarraf, Musick and Palmer will square off during the Nov. 2 election for the four school board seats.

There were 44 write-in votes on the Democratic ticket and 57 on the Republican ballot.

All 20 precincts reported, while mail-in votes are still being uploaded and counted, which will take several days.

There were no candidates featured on the Democratic ballot, which included 649 write-in votes cast. As mail-in votes will take several days to upload and count, it is not immediately clear whether Mylant will face a challenger during the Nov. 2 election.

All 13 precincts have reported as of press time.

In another township race, Mark Burkardt (2,907 votes, 99.62%) secured the Republican nod for re-election as tax collector.

Challenger David Vitula received 1,429 votes (90.39%), with an additional 152 write-in votes being cast on the Democratic ballot.

Burkardt is currently serving his ninth term as the township’s tax collector. 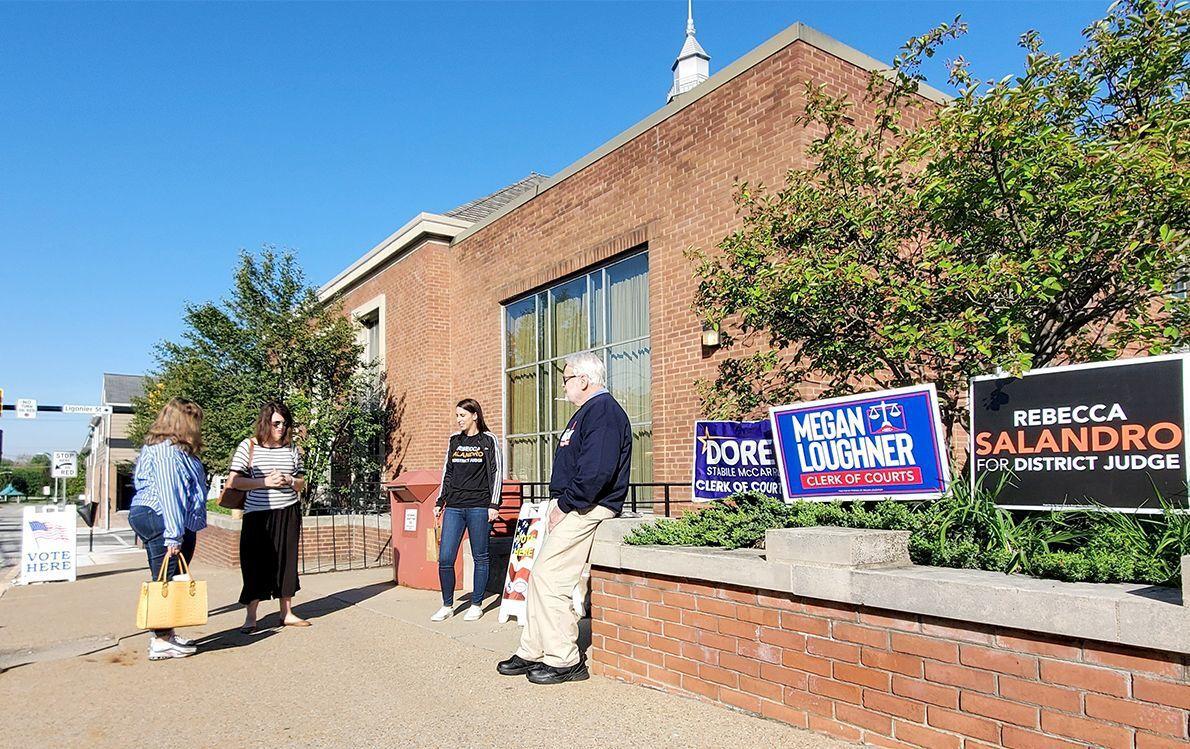 Voters make their way to Latrobe’s Third Ward polling location during Tuesday’s primary election at Adams Memorial Library along Chestnut Street. Westmoreland County’s turnout for the election at the polls was low, listed at 30.67% (75,512 ballots cast out of 246,241 registered voters) with 288 of 307 precents reporting as of press time, according to the county results website. Mail-in ballots will take several days to tally, so a complete picture of voter turnout and final, official results of the election are not available yet. For unofficial results tallied so far, see Pages A6-A7 of today’s edition.

All six precincts have reported, while mail-in votes are still being counted.

Bartels also currently serves as the city’s deputy mayor. During his time so far on council, Bartels has served on the public works and student showcase committees.

He also has served on the Adams Memorial Library board.

Latrobe’s current mayor, Rosie Wolford, is not seeking a third term. She has served eight years as mayor — two-terms — and an additional 10 years as a council member.

Bartels and McCune will face off during the Nov. 2 election.