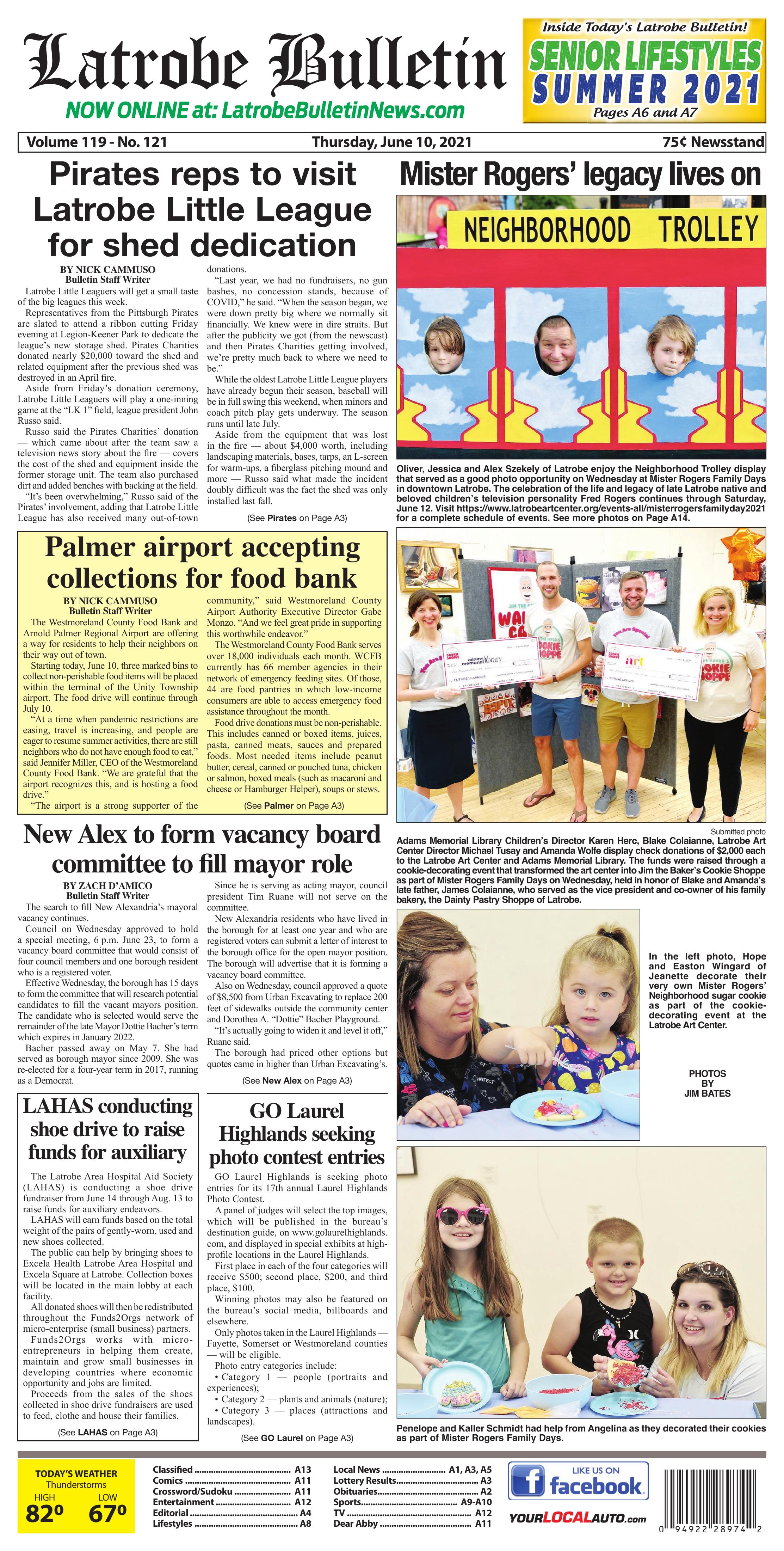 Latrobe Little Leaguers will get a small taste of the big leagues this week.

Representatives from the Pittsburgh Pirates are slated to attend a ribbon cutting Friday evening at Legion-Keener Park to dedicate the league’s new storage shed. Pirates Charities donated nearly $20,000 toward the shed and related equipment after the previous shed was destroyed in an April fire.

Russo said the Pirates Charities’ donation — which came about after the team saw a television news story about the fire — covers the cost of the shed and equipment inside the former storage unit. The team also purchased dirt and added benches with backing at the field.

“It’s been overwhelming,” Russo said of the Pirates’ involvement, adding that Latrobe Little League has also received many out-of-town donations.

“Last year, we had no fundraisers, no gun bashes, no concession stands, because of COVID,” he said. “When the season began, we were down pretty big where we normally sit financially. We knew were in dire straits. But after the publicity we got (from the newscast) and then Pirates Charities getting involved, we’re pretty much back to where we need to be.”

While the oldest Latrobe Little League players have already begun their season, baseball will be in full swing this weekend, when minors and coach pitch play gets underway. The season runs until late July.

Aside from the equipment that was lost in the fire — about $4,000 worth, including landscaping materials, bases, tarps, an L-screen for warm-ups, a fiberglass pitching mound and more — Russo said what made the incident doubly difficult was the fact the shed was only installed last fall.

“We just put everything in there the week before. Then we moved in it there and then a week later, it got burned down,” he said. “We were pretty upset and we put a lot of work into making it right for the kids.”

After the fire occurred in April, Latrobe Volunteer Fire Department responded and extinguished the blaze. Latrobe police said the storage shed utilized by Latrobe-GLSD Parks and Recreation and Latrobe Little League has been deemed a complete loss.

Latrobe police are continuing their investigation in regards to this act of vandalism. Anyone with information about this incident is asked to contact the Latrobe Police Department at 724-537-5526.

The Westmoreland County Food Bank and Arnold Palmer Regional Airport are offering a way for residents to help their neighbors on their way out of town.

Starting today, June 10, three marked bins to collect non-perishable food items will be placed within the terminal of the Unity Township airport. The food drive will continue through July 10.

“At a time when pandemic restrictions are easing, travel is increasing, and people are eager to resume summer activities, there are still neighbors who do not have enough food to eat,” said Jennifer Miller, CEO of the Westmoreland County Food Bank. “We are grateful that the airport recognizes this, and is hosting a food drive.”

“The airport is a strong supporter of the community,” said Westmoreland County Airport Authority Executive Director Gabe Monzo. “And we feel great pride in supporting this worthwhile endeavor.”

The Westmoreland County Food Bank serves over 18,000 individuals each month. WCFB currently has 66 member agencies in their network of emergency feeding sites. Of those, 44 are food pantries in which low-income consumers are able to access emergency food assistance throughout the month.

Donated foods must have original manufacturer’s label and be free of obvious defects or contamination, such as missing labels, popped tops or mold or rust on cans or bottles, or they cannot be redistributed.

“If every passenger moving through the airport during this time donated a non-perishable food item, the impact would be long lasting and a powerful step in addressing hunger in Westmoreland County,” Miller said.

Last year, the Food Bank distributed over 6.3 million pounds of food. Half of the food items come from the federal and state governments and the remaining 50% is generated through local donations and food drives.

For passengers who wish to help and cannot bring food items to the airport, a QR code will be posted with the bins to facilitate for monetary donations. By scanning the code with your smartphone, you will be directed to the donations page of the food bank website.

Council on Wednesday approved to hold a special meeting, 6 p.m. June 23, to form a vacancy board committee that would consist of four council members and one borough resident who is a registered voter.

Effective Wednesday, the borough has 15 days to form the committee that will research potential candidates to fill the vacant mayors position. The candidate who is selected would serve the remainder of the late Mayor Dottie Bacher’s term which expires in January 2022.

Bacher passed away on May 7. She had served as borough mayor since 2009. She was re-elected for a four-year term in 2017, running as a Democrat.

Since he is serving as acting mayor, council president Tim Ruane will not serve on the committee.

New Alexandria residents who have lived in the borough for at least one year and who are registered voters can submit a letter of interest to the borough office for the open mayor position. The borough will advertise that it is forming a vacancy board committee.

Also on Wednesday, council approved a quote of $8,500 from Urban Excavating to replace 200 feet of sidewalks outside the community center and Dorothea A. “Dottie” Bacher Playground.

“It’s actually going to widen it and level it off,” Ruane said.

The borough had priced other options but quotes came in higher than Urban Excavating’s.

Ruane also provided an update on the borough’s plans to resurface the tennis courts outside the community center. The borough has received all materials for the project — including windscreens and new nets for the tennis and basketball courts. The tennis court will also receive fresh paint with lines for pickleball.

“Weather is the only thing holding us up,” Ruane said.

“In terms of this project, we are focusing on the tennis courts,” he said.

Bilik, a district judge, lives next to the vacant building — which he says is an eyesore, potential arson hazard and hasn’t been occupied in more than 10 years. He said the ceiling is collapsing, gutters are falling off and black mold covers the outside of the building.

“Enough is enough,” he said. “The building is literally four feet from my house. It’s an exposure that I just don’t want anymore.”

Council said they are aware of the problem and are working to resolve it. Code enforcement officer Chuck Ferry said the property owner has been issued two notices of violation and has 30 days “bring it to code or start tearing it down.” After then, the borough will file a citation with the district magistrate.

In November, council approved updates to several ordinances, including one that made it easier for the borough to identify nuisance properties and levy fines.

“It will now give the authority much more ability to go in there and do something about it,” said council member Jennifer Graham.

Added Ruane: “It also gave the (code enforcement officer) more authority to be able to just visually see something without having to go inside the property.”

Borough officials said the county has a program to address blight that it will look into.

The fireworks and nuisance ordinances are available for review at the borough office or newalexpa.org.

Ferry said nine out of 10 property owners who have ben issued notices regarding high grass have addressed the matter. He also said three nuisance properties received notices of violation, including the aforementioned one on West Main Street.

A panel of judges will select the top images, which will be published in the bureau’s destination guide, on www.golaurelhighlands.com, and displayed in special exhibits at high-profile locations in the Laurel Highlands.

Winning photos may also be featured on the bureau’s social media, billboards and elsewhere.

Only photos taken in the Laurel Highlands — Fayette, Somerset or Westmoreland counties — will be eligible.

For complete details and to upload photos for consideration, please www.golaurelhighlands.com/about-us/photo-contest/ or call 724-238-5661.

The Latrobe Area Hospital Aid Society (LAHAS) is conducting a shoe drive fundraiser from June 14 through Aug. 13 to raise funds for auxiliary endeavors.

LAHAS will earn funds based on the total weight of the pairs of gently-worn, used and new shoes collected.

The public can help by bringing shoes to Excela Health Latrobe Area Hospital and Excela Square at Latrobe. Collection boxes will be located in the main lobby at each facility.

All donated shoes will then be redistributed throughout the Funds2Orgs network of micro-enterprise (small business) partners.

Funds2Orgs works with micro-entrepreneurs in helping them create, maintain and grow small businesses in developing countries where economic opportunity and jobs are limited.

Proceeds from the sales of the shoes collected in shoe drive fundraisers are used to feed, clothe and house their families.

In fact, one budding entrepreneur in Haiti even earned enough to send her son to law school.

“We are excited about our shoe drive,” said LAHAS event chair and incoming President Jan Mills. “Now is a great time to repurpose your gently worn, used and new shoes, raise funds for LAHAS, and help families in developing nations who need economic opportunities. It’s a win-win for everyone.” 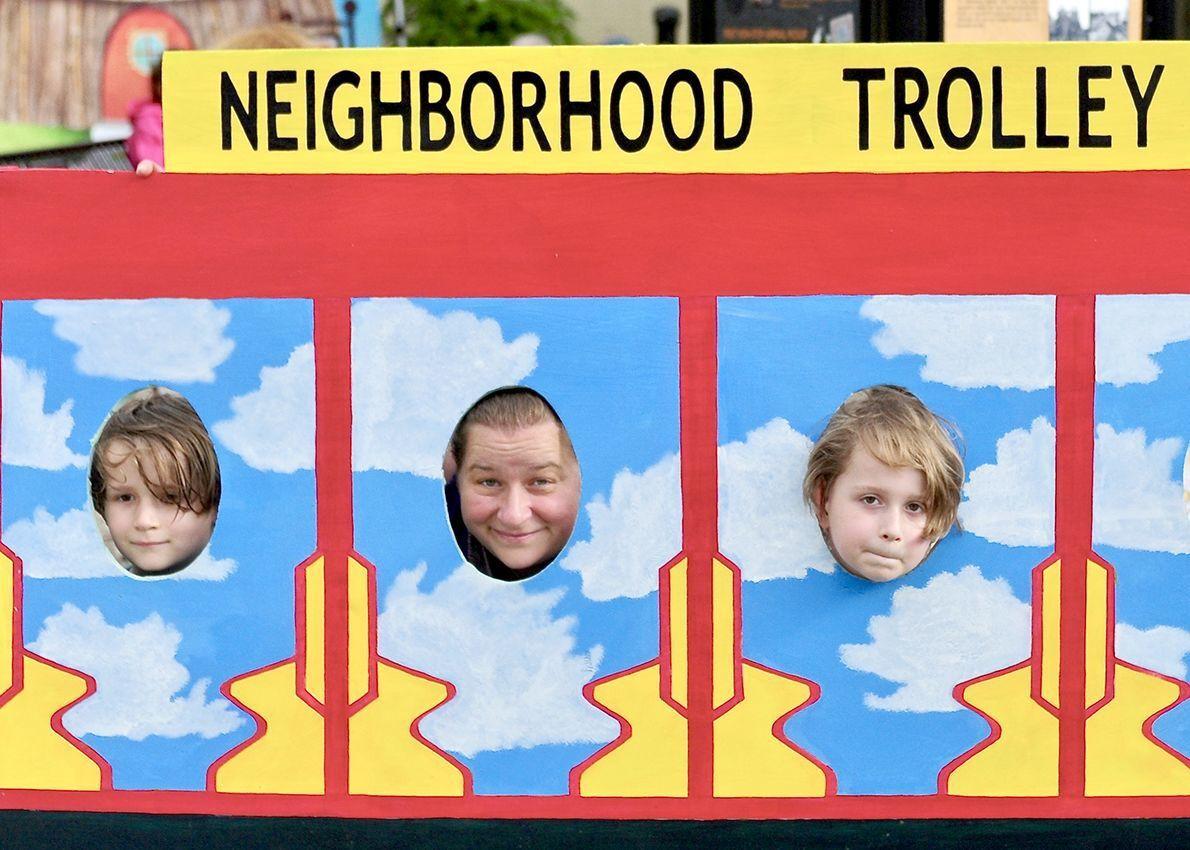 Oliver, Jessica and Alex Szekely of Latrobe enjoy the Neighborhood Trolley display that served as a good photo opportunity on Wednesday at Mister Rogers Family Days in downtown Latrobe. The celebration of the life and legacy of late Latrobe native and beloved children’s television personality Fred Rogers continues through Saturday, June 12. Visit https://www.latrobeartcenter.org/events-all/misterrogersfamilyday2021 for a complete schedule of events. See more photos on Page A14. 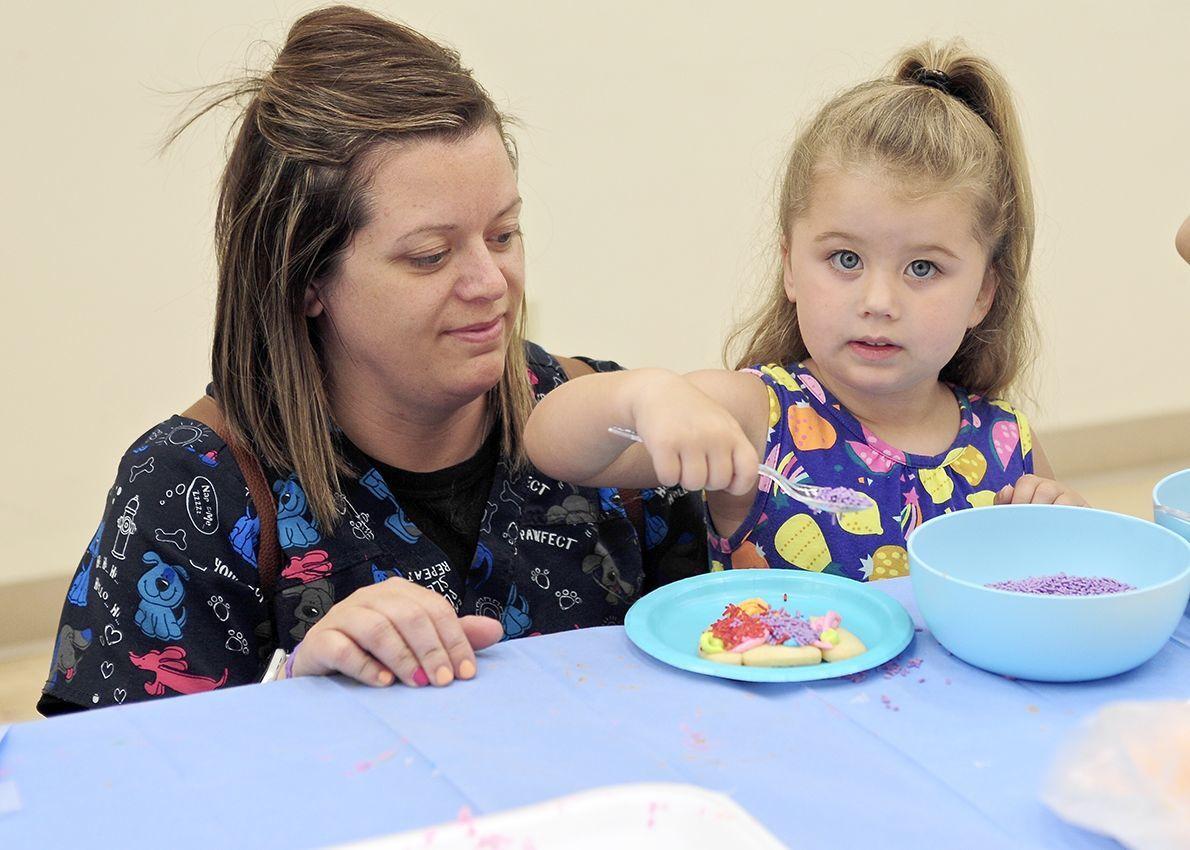 The Latrobe Art Center was transformed into Jim the Baker’s Cookie Shoppe where Hope and Easton Wingard of Jeanette decorate their very own Mister Rogers’ Neighborhood sugar cookie with Dainty Pastry Shoppe. 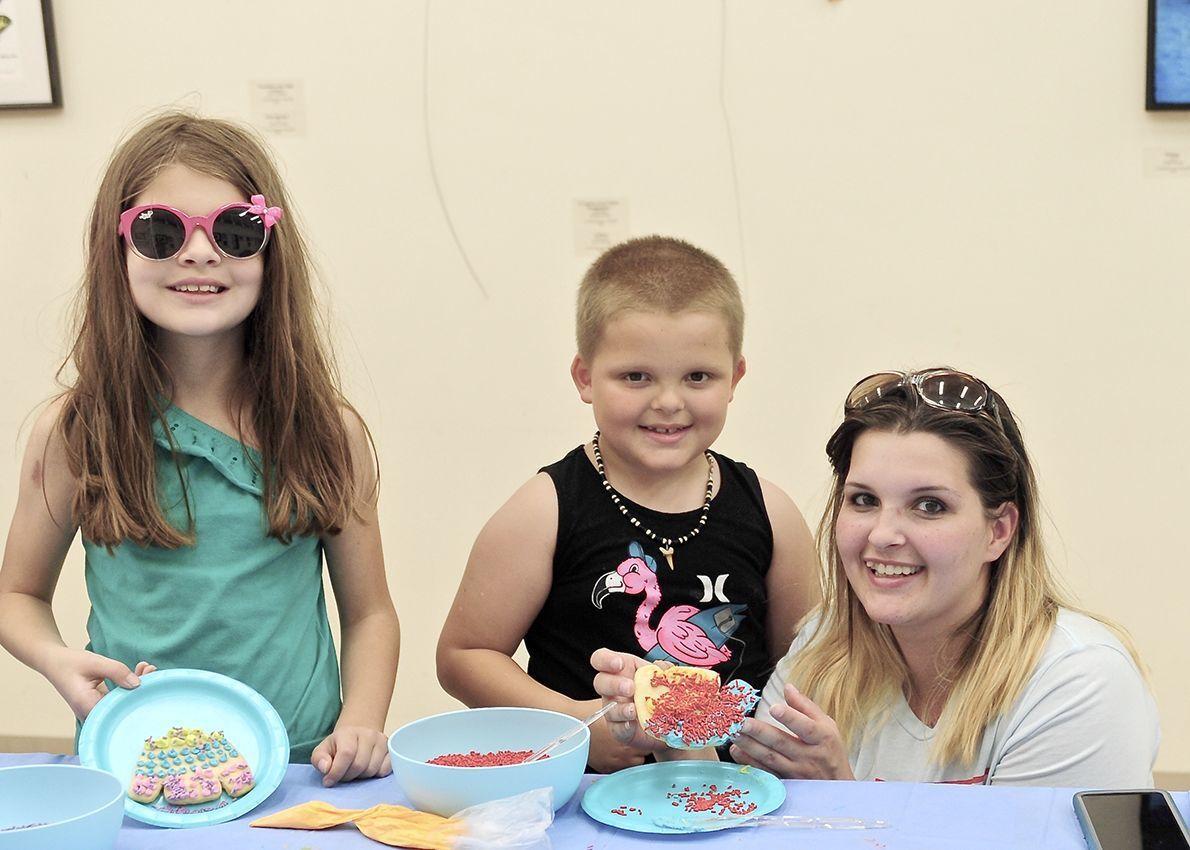 Penelope and Kaller Schmidt had help from Angelina as they decorated their cookies as part of Mister Rogers Family Days.