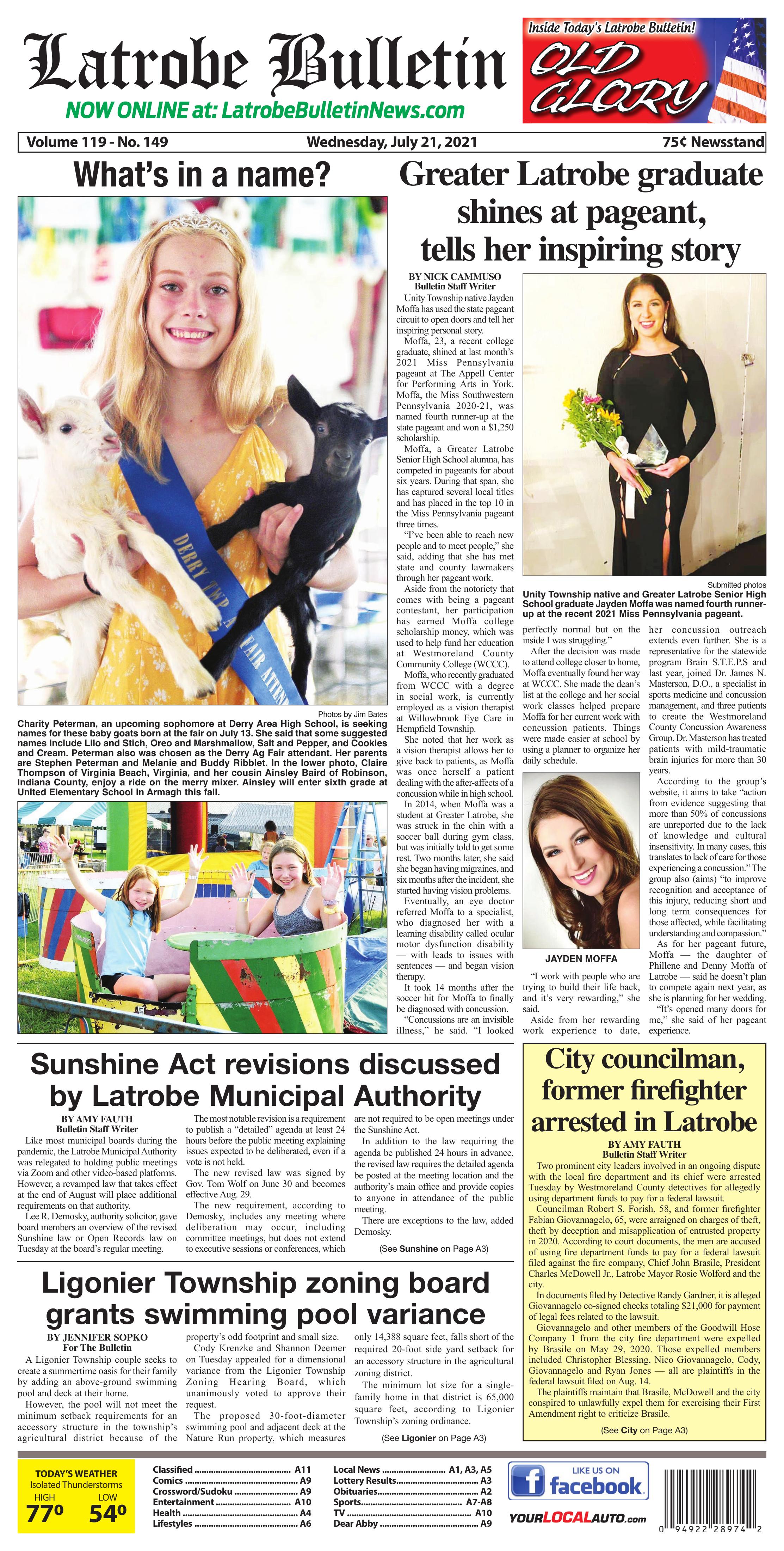 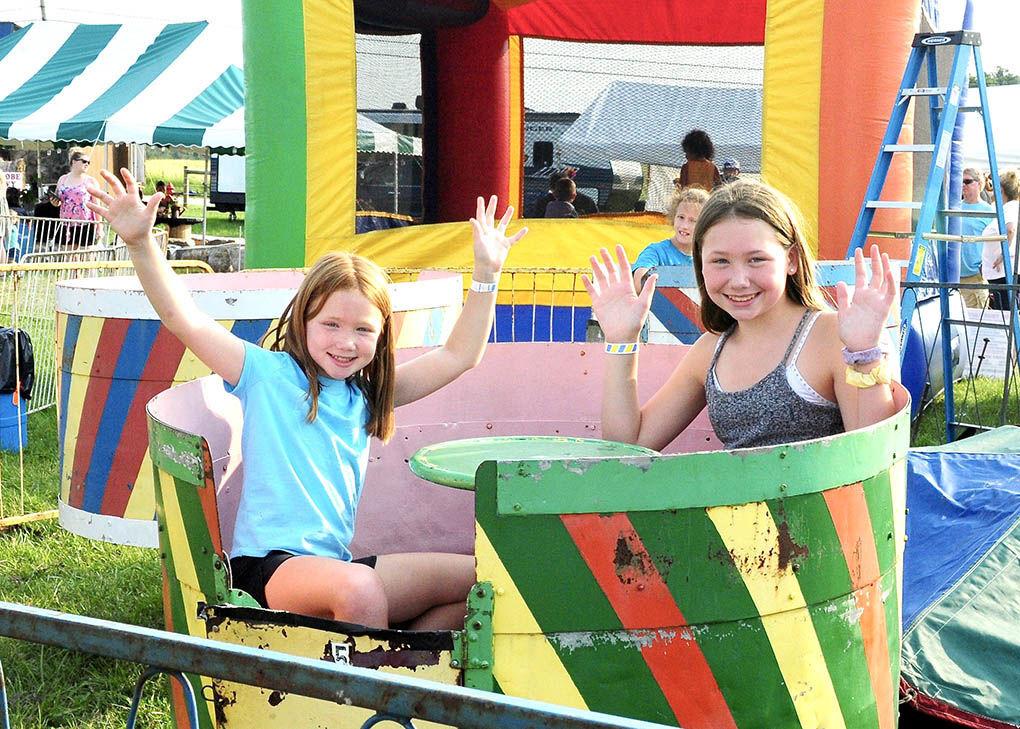 Like most municipal boards during the pandemic, the Latrobe Municipal Authority was relegated to holding public meetings via Zoom and other video-based platforms. However, a revamped law that takes effect at the end of August will place additional requirements on that authority.

Lee R. Demosky, authority solicitor, gave board members an overview of the revised Sunshine law or Open Records law on Tuesday at the board’s regular meeting.

The most notable revision is a requirement to publish a “detailed” agenda at least 24 hours before the public meeting explaining issues expected to be deliberated, even if a vote is not held.

The new revised law was signed by Gov. Tom Wolf on June 30 and becomes effective Aug. 29.

The new requirement, according to Demosky, includes any meeting where deliberation may occur, including committee meetings, but does not extend to executive sessions or conferences, which are not required to be open meetings under the Sunshine Act.

In addition to the law requiring the agenda be published 24 hours in advance, the revised law requires the detailed agenda be posted at the meeting location and the authority’s main office and provide copies to anyone in attendance of the public meeting.

There are exceptions to the law, added Demosky.

The authority is prohibited, under the new law, from taking action except in the following circumstances:

For matters added to the agenda, the board may take official action provided it publishes an amended agenda within one business day of when the agenda was changed.

LMA Manager Terri Hauser usually has board members email her any motions that need added to the agenda by Monday of the week before a meeting so she can complete the agenda and get them out to authority members. The LMA posts the agenda to their website in most cases ahead of time.

In other business, the board voted to award a contract of $569,965 to Kukurin Contracting Inc. of Export for the siphon chamber mechanically cleaned bar screen replacement. Although JP Environmental of Shamokin appeared to be the lowest bidder at $427,250, the company’s bid was eliminated after it was determined a mathematical error was made in the bid.

On the wastewater department side, board members approved bills from the capital additions fund of $10,789 for Gibson-Thomas and a total of $608,977.25 for several bills from the 2019 construction fund.

In other business, the authority board voted to contract with PNC Capital Marketing LLC to handle future bond issue refinancing work. The board also approved stipulation of settlements for two properties owned by the Harr family at $4,875 each.

A Ligonier Township couple seeks to create a summertime oasis for their family by adding an above-ground swimming pool and deck at their home.

However, the pool will not meet the minimum setback requirements for an accessory structure in the township’s agricultural district because of the property’s odd footprint and small size.

Cody Krenzke and Shannon Deemer on Tuesday appealed for a dimensional variance from the Ligonier Township Zoning Hearing Board, which unanimously voted to approve their request.

The proposed 30-foot-diameter swimming pool and adjacent deck at the Nature Run property, which measures only 14,388 square feet, falls short of the required 20-foot side yard setback for an accessory structure in the agricultural zoning district.

The minimum lot size for a single-family home in that district is 65,000 square feet, according to Ligonier Township’s zoning ordinance.

Like others in the neighborhood, the couple’s small, pie-shaped, non-conforming property is typical of those found in the township’s village district, as zoning and community development officer Jim Nieusma explained. The rear lot line tapers to just over 17 feet.

The proposed pool location behind the house and garage would leave about a 9-foot setback on each side.

The couple acquired the property in July 2017 and live there with their two sons. As a first-time home buyer, Krenzke said he was not aware of the township’s zoning requirements for a swimming pool, which he had already purchased before discussing the matter with Nieusma.

“I knew my yard was oddly-shaped, but I didn’t realize that would obstruct me from putting up a pool,” Krenzke testified. “But with there being no way for me to extend my yard to meet those setbacks, I really, really don’t have any other choice but to ask you guys for permission to grant me that setback variance at this point.”

Another obstacle is the property’s septic system and leach bed, also located behind the garage. The Pennsylvania Department of Environmental Protection (DEP) also requires a 10-foot setback from a leach bed, which pushes the swimming pool further toward the narrowest part of the property and forces the deck to be attached to that side.

Susan Ylvisaker and Ed Gordon own an adjacent lot, as well as a 47-acre farm located catty-corner to Krenzke and Deemer. There is an active construction road and future driveway running along the boundary line to the farm where frequent vehicle traffic is expected for the next three to four months.

Ylvisaker said while they do not want to deny the family the use of their pool, their primary concern is safety, given the nearby construction traffic.

Worried about having small kids less than 10 feet from the driveway, she requested that a fence be added if possible.

“We just don’t want to see any accidents. And right now, it’s been pretty busy with vehicles coming in and out,” Ylvisaker said.

The zoning hearing board voted 3-0 to approve the variance, with the conditions that the above-ground swimming pool is located no closer than nine feet from the property line and that Krenzke and Deemer follow all regulations for its construction, including the deck.

At 54 inches tall, the pool does not require a fence, but the deck must have a locking or removable set of stairs, Nieusma said.

Kurtz pointed out that the minimum side yard setback for a non-confirming property in all districts under the zoning ordinance is actually 10 feet, so the board in reality granted a one-foot setback for the swimming pool.

Board solicitor Mark Sorice explained that irregularly-shaped lots and those that predate Ligonier Township’s zoning ordinance, originally enacted in 1969, constitute hardships from which property owners may appeal to the township for relief.

Moffa, 23, a recent college graduate, shined at last month’s 2021 Miss Pennsylvania pageant at The Appell Center for Performing Arts in York. Moffa, the Miss Southwestern Pennsylvania 2020-21, was named fourth runner-up at the state pageant and won a $1,250 scholarship.

Moffa, a Greater Latrobe Senior High School alumna, has competed in pageants for about six years. During that span, she has captured several local titles and has placed in the top 10 in the Miss Pennsylvania pageant three times.

“I’ve been able to reach new people and to meet people,” she said, adding that she has met state and county lawmakers through her pageant work.

Aside from the notoriety that comes with being a pageant contestant, her participation has earned Moffa college scholarship money, which was used to help fund her education at Westmoreland County Community College (WCCC).

Moffa, who recently graduated from WCCC with a degree in social work, is currently employed as a vision therapist at Willowbrook Eye Care in Hempfield Township.

She noted that her work as a vision therapist allows her to give back to patients, as Moffa was once herself a patient dealing with the after-affects of a concussion while in high school.

In 2014, when Moffa was a student at Greater Latrobe, she was struck in the chin with a soccer ball during gym class, but was initially told to get some rest. Two months later, she said she began having migraines, and six months after the incident, she started having vision problems.

Eventually, an eye doctor referred Moffa to a specialist, who diagnosed her with a learning disability called ocular motor dysfunction disability — with leads to issues with sentences — and began vision therapy.

It took 14 months after the soccer hit for Moffa to finally be diagnosed with concussion.

“Concussions are an invisible illness,” he said. “I looked perfectly normal but on the inside I was struggling.”

After the decision was made to attend college closer to home, Moffa eventually found her way at WCCC. She made the dean’s list at the college and her social work classes helped prepare Moffa for her current work with concussion patients. Things were made easier at school by using a planner to organize her daily schedule.

“I work with people who are trying to build their life back, and it’s very rewarding,” she said.

Aside from her rewarding work experience to date, her concussion outreach extends even further. She is a representative for the statewide program Brain S.T.E.P.S and last year, joined Dr. James N. Masterson, D.O., a specialist in sports medicine and concussion management, and three patients to create the Westmoreland County Concussion Awareness Group. Dr. Masterson has treated patients with mild-traumatic brain injuries for more than 30 years.

According to the group’s website, it aims to take “action from evidence suggesting that more than 50% of concussions are unreported due to the lack of knowledge and cultural insensitivity. In many cases, this translates to lack of care for those experiencing a concussion.” The group also (aims) “to improve recognition and acceptance of this injury, reducing short and long term consequences for those affected, while facilitating understanding and compassion.”

As for her pageant future, Moffa — the daughter of Phillene and Denny Moffa of Latrobe — said he doesn’t plan to compete again next year, as she is planning for her wedding.

“It’s opened many doors for me,” she said of her pageant experience.

Two prominent city leaders involved in an ongoing dispute with the local fire department and its chief were arrested Tuesday by Westmoreland County detectives for allegedly using department funds to pay for a federal lawsuit.

Councilman Robert S. Forish, 58, and former firefighter Fabian Giovannagelo, 65, were arraigned on charges of theft, theft by deception and misapplication of entrusted property in 2020. According to court documents, the men are accused of using fire department funds to pay for a federal lawsuit filed against the fire company, Chief John Brasile, President Charles McDowell Jr., Latrobe Mayor Rosie Wolford and the city.

In documents filed by Detective Randy Gardner, it is alleged Giovannagelo co-signed checks totaling $21,000 for payment of legal fees related to the lawsuit.

Giovannagelo and other members of the Goodwill Hose Company 1 from the city fire department were expelled by Brasile on May 29, 2020. Those expelled members included Christopher Blessing, Nico Giovannagelo, Cody, Giovannagelo and Ryan Jones — all are plaintiffs in the federal lawsuit filed on Aug. 14.

The plaintiffs maintain that Brasile, McDowell and the city conspired to unlawfully expel them for exercising their First Amendment right to criticize Brasile.

Gardner alleges Fabian co-signed a $5,500 check from the Goodwill Hose Co. account on May 30, 2020, to retain attorney Frederick E. Charles of Allentown to represent them in the federal suit. Forish, who was treasurer of the fire company at the time, was reportedly the other signer of the check.

Documents were provided to Gardner from Charles during the course of the investigation of the checks, according to Gardner.

According to the criminal complaint, Gardner reviewed months worth of minutes from fire company meetings and found no evidence of actions taken to authorize payments to Charles.

Forish and Fabian were released on $25,000 unsecured bond each after the arraignment Tuesday before Senior District Judge Joseph A. Cannoni of Somerset County at the office of Magisterial District Judge Michael Mahady in Unity Township.

The case was referred to Westmoreland County detectives by Latrobe police, who were the first agency to receive the complaint due to potential conflicts of interest.

Preliminary hearings for both men are scheduled Aug. 2.