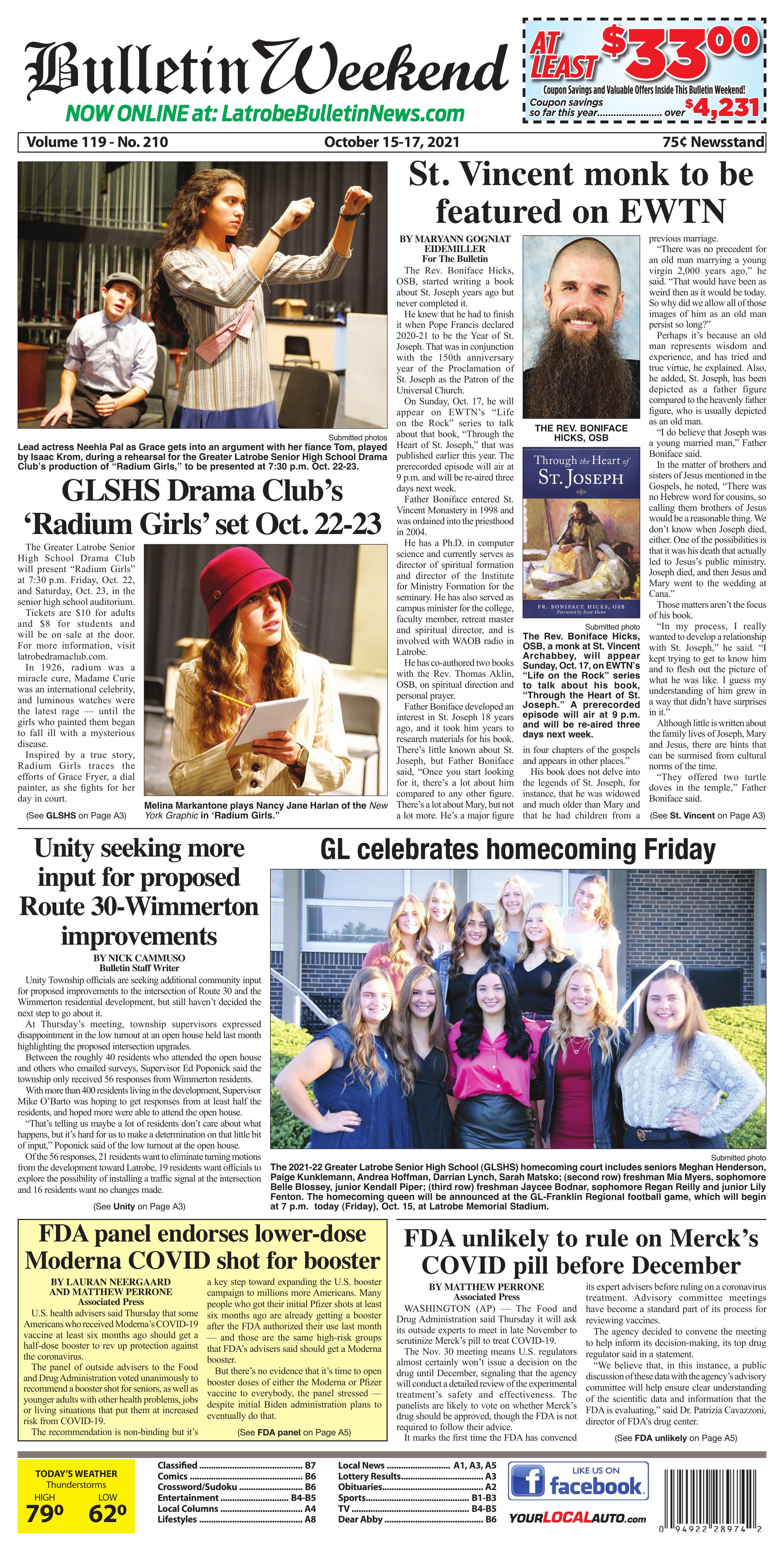 Lead actress Neehla Pal as Grace gets into an argument with her fiance Tom, played by Isaac Krom, during a rehearsal for the Greater Latrobe Senior High School Drama Club’s production of “Radium Girls,” to be presented at 7:30 p.m. Oct. 22-23.

Tickets are $10 for adults and $8 for students and will be on sale at the door. For more information, visit latrobedramaclub.com.

In 1926, radium was a miracle cure, Madame Curie was an international celebrity, and luminous watches were the latest rage — until the girls who painted them began to fall ill with a mysterious disease.

Inspired by a true story, Radium Girls traces the efforts of Grace Fryer, a dial painter, as she fights for her day in court.

Her chief adversary is her former employer, Arthur Roeder, an idealistic man who cannot bring himself to believe that the same element that shrinks tumors could have anything to do with the terrifying rash of illnesses among his employees.

As the case goes on, however, Grace finds herself battling not just with the U.S. Radium Corporation, but with her own family and friends, who fear that her campaign for justice will backfire.

Written with warmth and humor, Radium Girls is a fast-moving, highly theatrical ensemble piece. Called a “powerful” and “engrossing” drama by critics, Radium Girls offers a wry, unflinching look at the peculiarly American obsessions with health, wealth and the commercialization of science. 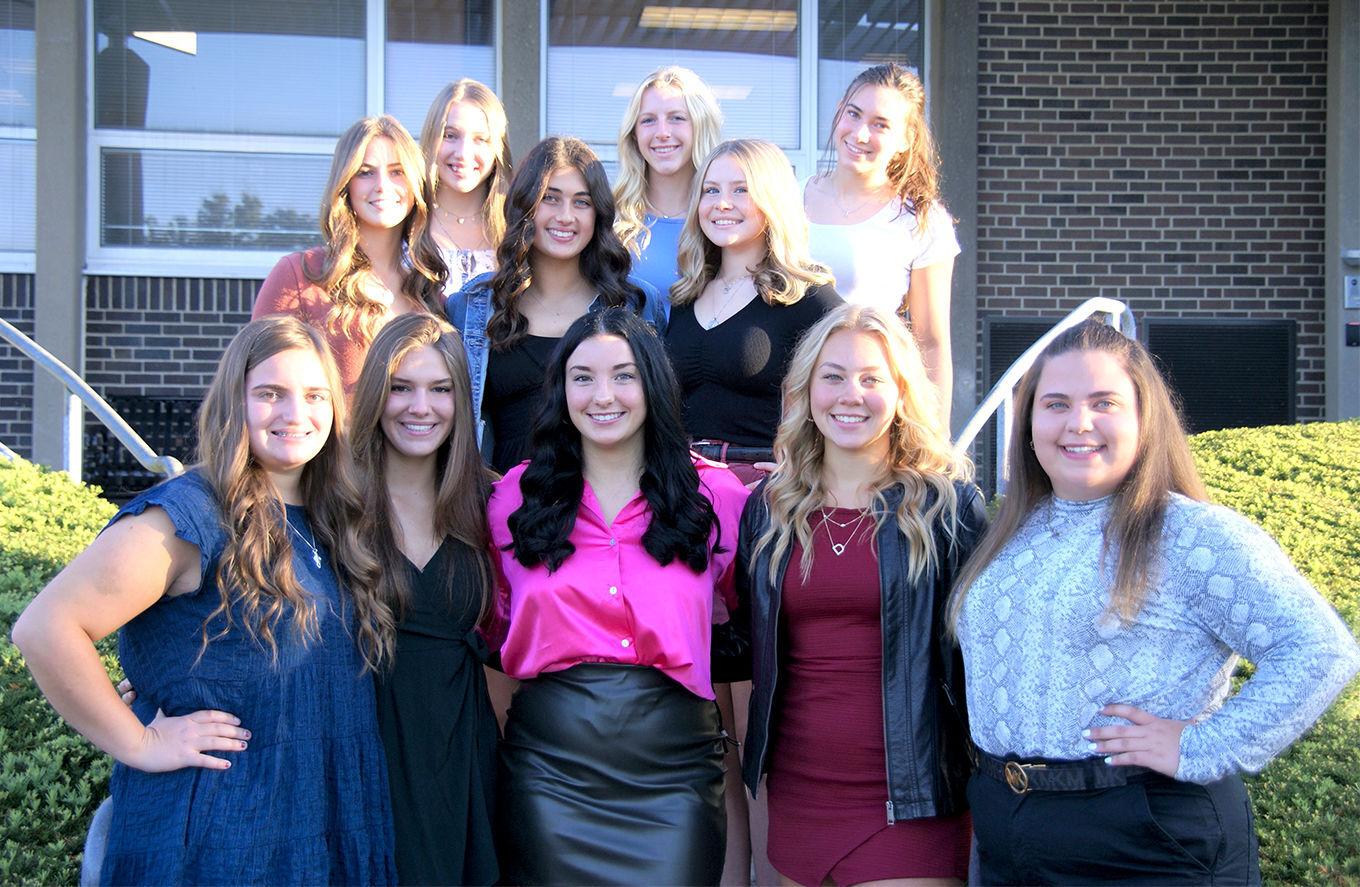 Unity Township officials are seeking additional community input for proposed improvements to the intersection of Route 30 and the Wimmerton residential development, but still haven’t decided the next step to go about it.

Between the roughly 40 residents who attended the open house and others who emailed surveys, Supervisor Ed Poponick said the township only received 56 responses from Wimmerton residents.

With more than 400 residents living in the development, Supervisor Mike O’Barto was hoping to get responses from at least half the residents, and hoped more were able to attend the open house.

“That’s telling us maybe a lot of residents don’t care about what happens, but it’s hard for us to make a determination on that little bit of input,” Poponick said of the low turnout at the open house.

Of the 56 responses, 21 residents want to eliminate turning motions from the development toward Latrobe, 19 residents want officials to explore the possibility of installing a traffic signal at the intersection and 16 residents want no changes made.

Township officials haven’t made any decisions on how to potentially garner more community input.

“The three of us will sit down and talk about it, and go from there,” Poponick said.

Last month’s open house was provided as a public service and did not include involvement from the Pennsylvania Department of Transportation (PennDOT).

Township officials had previously looked into adding a traffic signal at the intersection, engineer Dan Schmitt of Gibson-Thomas has said, but officials were not in favor of it, citing costs and maintenance need to operate a traffic light.

If improvements are made, Schmitt said previously that motorists traveling on Route 30 East toward Wimmerton will still have the option of making the left turn from the highway into the development. But he noted that “it’s our intention that if anybody wants to go to Latrobe (from Wimmerton), they will go down past the Green Meadows nursing home (via Brouwers Drive) and go out at St. Vincent Lake.”

Schmitt said the yield sign going out of the Wimmerton development will still be in place if roadway improvements are made at the site.

Schmitt has said that the township hasn’t received grant funding for intersection improvements and hasn’t made a decision on whether a project will occur. He said last month that officials may not know where they stand in regard to grant funding until next spring.

If the township receives funding and moves forward with improvement plans, the project would be paid in full through the ARLE grant. If the municipality fails to receive funding, Schmitt said previously it could exploring making improvements through a previously approved township bond issue.

In other business Thursday, supervisors approved:

The Rev. Boniface Hicks, OSB, a monk at St. Vincent Archabbey, will appear Sunday, Oct. 17, on EWTN’s “Life on the Rock” series to talk about his book, “Through the Heart of St. Joseph.” A prerecorded episode will air at 9 p.m. and will be re-aired three days next week.

The Rev. Boniface Hicks, OSB, started writing a book about St. Joseph years ago but never completed it.

He knew that he had to finish it when Pope Francis declared 2020-21 to be the Year of St. Joseph. That was in conjunction with the 150th anniversary year of the Proclamation of St. Joseph as the Patron of the Universal Church.

On Sunday, Oct. 17, he will appear on EWTN’s “Life on the Rock” series to talk about that book, “Through the Heart of St. Joseph,” that was published earlier this year. The prerecorded episode will air at 9 p.m. and will be re-aired three days next week.

Father Boniface entered St. Vincent Monastery in 1998 and was ordained into the priesthood in 2004.

He has a Ph.D. in computer science and currently serves as director of spiritual formation and director of the Institute for Ministry Formation for the seminary. He has also served as campus minister for the college, faculty member, retreat master and spiritual director, and is involved with WAOB radio in Latrobe.

He has co-authored two books with the Rev. Thomas Aklin, OSB, on spiritual direction and personal prayer.

Father Boniface developed an interest in St. Joseph 18 years ago, and it took him years to research materials for his book. There’s little known about St. Joseph, but Father Boniface said, “Once you start looking for it, there’s a lot about him compared to any other figure. There’s a lot about Mary, but not a lot more. He’s a major figure in four chapters of the gospels and appears in other places.”

His book does not delve into the legends of St. Joseph, for instance, that he was widowed and much older than Mary and that he had children from a previous marriage.

“There was no precedent for an old man marrying a young virgin 2,000 years ago,” he said. “That would have been as weird then as it would be today. So why did we allow all of those images of him as an old man persist so long?”

Perhaps it’s because an old man represents wisdom and experience, and has tried and true virtue, he explained. Also, he added, St. Joseph, has been depicted as a father figure compared to the heavenly father figure, who is usually depicted as an old man.

“I do believe that Joseph was a young married man,” Father Boniface said.

In the matter of brothers and sisters of Jesus mentioned in the Gospels, he noted, “There was no Hebrew word for cousins, so calling them brothers of Jesus would be a reasonable thing. We don’t know when Joseph died, either. One of the possibilities is that it was his death that actually led to Jesus’s public ministry. Joseph died, and then Jesus and Mary went to the wedding at Cana.”

Those matters aren’t the focus of his book.

“In my process, I really wanted to develop a relationship with St. Joseph,” he said. “I kept trying to get to know him and to flesh out the picture of what he was like. I guess my understanding of him grew in a way that didn’t have surprises in it.”

Although little is written about the family lives of Joseph, Mary and Jesus, there are hints that can be surmised from cultural norms of the time.

“That was an offering of the poor. So they were not destitute and they were not rich. Then when Jesus declares himself, they ask, ‘Who is this? Isn’t this the carpenter’s son?’ That was a surprise to them that Jesus had anything to offer. That leads to their lives being ordinary. It was in that ordinariness that Joseph took on the responsibility to teach Jesus to do the will of the father.”

In the book, he writes: “When Joseph asked Jesus to do his chores and complete certain tasks necessary for their carpentry projects, when he asked him for a cup of cold water, or when they went together to visit a sick neighbor, in each case, they were doing the will of the Father.”

He further noted that the Benedictine charism of ora et labora, or work and prayer, is in the spirit of St. Joseph, and was the model for the sanctification of ordinary daily life.

The book presents five pathways to meet St. Joseph. Two are to look at him as a protector, as he was for Mary and Jesus, or as a father because, Father Hicks wrote, “We are all brothers and sisters of Jesus.”

“In two other pathways, to become like him we can become silent or we can become hidden,” he said. “Then in one of the pathways we choose, he becomes the comfort of the afflicted.”

The book cites the courage of St. Joseph to carry out the will of God through accepting his role with Mary and Jesus, and in fleeing to Egypt to save his family. He becomes a role model for navigating through “life’s inevitable nights.” The author writes, too, about St. Joseph’s surrender to God’s plan and how to become humble and obedient like he was.

Those are some of the things that lead to the chapter on what Father Boniface calls the Joseph Option. Through that, he said, can come a powerful influence to become a leaven for renewal of culture and society, and live in a way to help others to encounter their faith “through the heart of St. Joseph.”

The shows can also be viewed online at www.ewtn.com/tv/shows/life-on-the-rock.