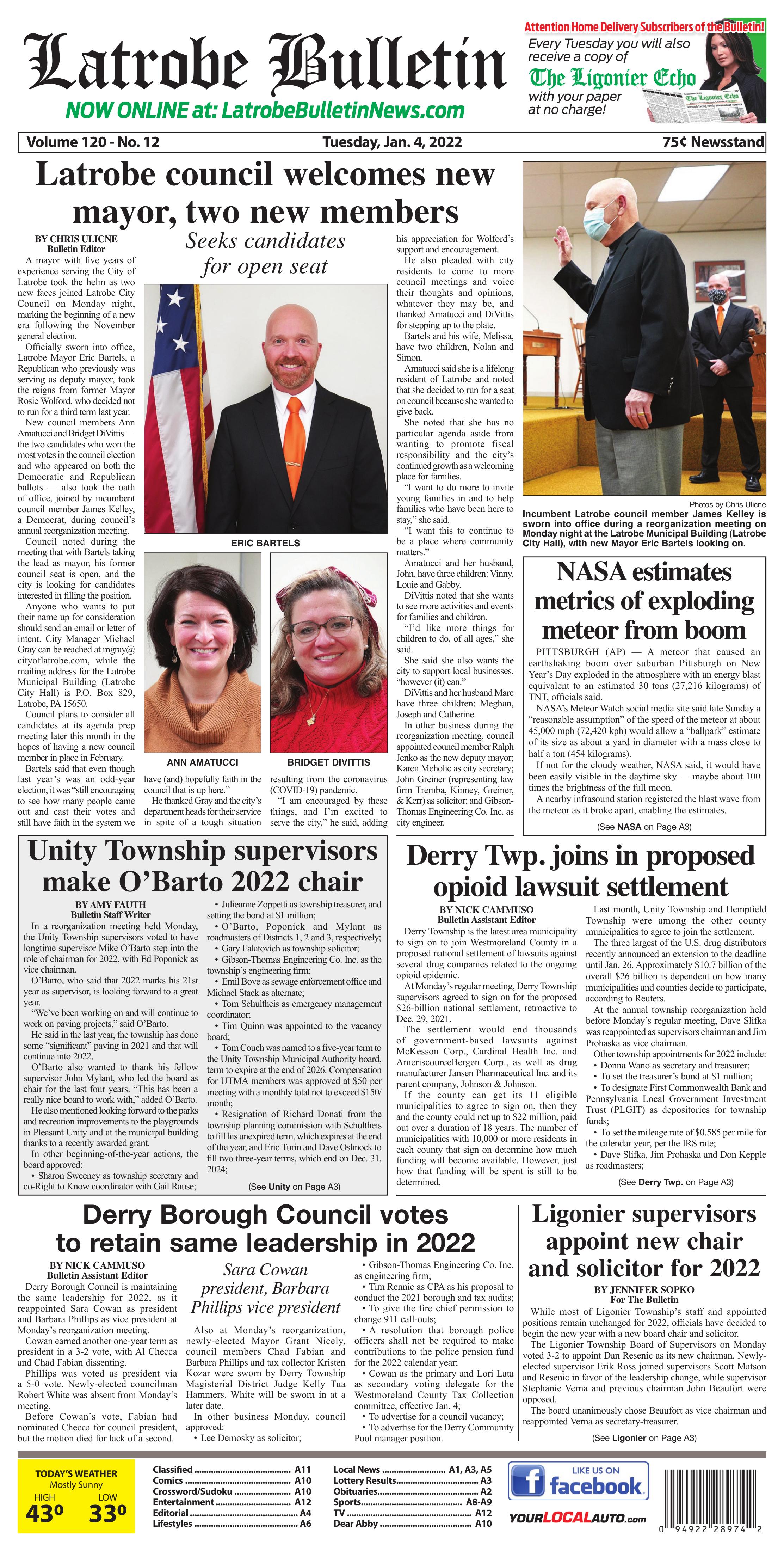 A mayor with five years of experience serving the City of Latrobe took the helm as two new faces joined Latrobe City Council on Monday night, marking the beginning of a new era following the November general election.

Officially sworn into office, Latrobe Mayor Eric Bartels, a Republican who previously was serving as deputy mayor, took the reigns from former Mayor Rosie Wolford, who decided not to run for a third term last year.

New council members Ann Amatucci and Bridget DiVittis — the two candidates who won the most votes in the council election and who appeared on both the Democratic and Republican ballots — also took the oath of office, joined by incumbent council member James Kelley, a Democrat, during council’s annual reorganization meeting.

Council noted during the meeting that with Bartels taking the lead as mayor, his former council seat is open, and the city is looking for candidates interested in filling the position.

Anyone who wants to put their name up for consideration should send an email or letter of intent. City Manager Michael Gray can be reached at mgray@cityoflatrobe.com, while the mailing address for the Latrobe Municipal Building (Latrobe City Hall) is P.O. Box 829, Latrobe, PA 15650.

Council plans to consider all candidates at its agenda prep meeting later this month in the hopes of having a new council member in place in February.

Bartels said that even though last year’s was an odd-year election, it was “still encouraging to see how many people came out and cast their votes and still have faith in the system we have (and) hopefully faith in the council that is up here.”

He thanked Gray and the city’s department heads for their service in spite of a tough situation resulting from the coronavirus (COVID-19) pandemic.

“I am encouraged by these things, and I’m excited to serve the city,” he said, adding his appreciation for Wolford’s support and encouragement.

He also pleaded with city residents to come to more council meetings and voice their thoughts and opinions, whatever they may be, and thanked Amatucci and DiVittis for stepping up to the plate.

Bartels and his wife, Melissa, have two children, Nolan and Simon.

Amatucci said she is a lifelong resident of Latrobe and noted that she decided to run for a seat on council because she wanted to give back.

She noted that she has no particular agenda aside from wanting to promote fiscal responsibility and the city’s continued growth as a welcoming place for families.

“I want to do more to invite young families in and to help families who have been here to stay,” she said.

“I want this to continue to be a place where community matters.”

Amatucci and her husband, John, have three children: Vinny, Louie and Gabby.

DiVittis noted that she wants to see more activities and events for families and children.

“I’d like more things for children to do, of all ages,” she said.

She said she also wants the city to support local businesses, “however (it) can.”

DiVittis and her husband Marc have three children: Meghan, Joseph and Catherine.

In a reorganization meeting held Monday, the Unity Township supervisors voted to have longtime supervisor Mike O’Barto step into the role of chairman for 2022, with Ed Poponick as vice chairman.

O’Barto, who said that 2022 marks his 21st year as supervisor, is looking forward to a great year.

“We’ve been working on and will continue to work on paving projects,” said O’Barto.

He said in the last year, the township has done some “significant” paving in 2021 and that will continue into 2022.

O’Barto also wanted to thank his fellow supervisor John Mylant, who led the board as chair for the last four years. “This has been a really nice board to work with,” added O’Barto.

He also mentioned looking forward to the parks and recreation improvements to the playgrounds in Pleasant Unity and at the municipal building thanks to a recently awarded grant.

In other beginning-of-the-year actions, the board approved:

They also named the three township supervisors as delegates for the state convention and Poponick as the official voting member. Mileage rate for travel to the convention was set at 58.5 cents per mile.

Bonds for the office staff were also set at $100,000 per staff member. The supervisors also decided to set benefits for non-union employees the same as for union employees.

Derry Borough Council is maintaining the same leadership for 2022, as it reappointed Sara Cowan as president and Barbara Phillips as vice president at Monday’s reorganization meeting.

Cowan earned another one-year term as president in a 3-2 vote, with Al Checca and Chad Fabian dissenting.

Phillips was voted as president via a 5-0 vote. Newly-elected councilman Robert White was absent from Monday’s meeting.

Before Cowan’s vote, Fabian had nominated Checca for council president, but the motion died for lack of a second.

In other business Monday, council approved:

Derry Township is the latest area municipality to sign on to join Westmoreland County in a proposed national settlement of lawsuits against several drug companies related to the ongoing opioid epidemic.

At Monday’s regular meeting, Derry Township supervisors agreed to sign on for the proposed $26-billion national settlement, retroactive to Dec. 29, 2021.

If the county can get its 11 eligible municipalities to agree to sign on, then they and the county could net up to $22 million, paid out over a duration of 18 years. The number of municipalities with 10,000 or more residents in each county that sign on determine how much funding will become available. However, just how that funding will be spent is still to be determined.

Last month, Unity Township and Hempfield Township were among the other county municipalities to agree to join the settlement.

The three largest of the U.S. drug distributors recently announced an extension to the deadline until Jan. 26. Approximately $10.7 billion of the overall $26 billion is dependent on how many municipalities and counties decide to participate, according to Reuters.

At the annual township reorganization held before Monday’s regular meeting, Dave Slifka was reappointed as supervisors chairman and Jim Prohaska as vice chairman.

Other township appointments for 2022 include:

At last month’s meeting, the supervisors approved a $4,614,428 final budget without a tax increase.

The budget is about $1.15 million more than the 2021 spending plan. The township’s current millage rate is 3.0 mills.

Supervisors added that Christmas “Tree-cycling” is available at the township municipal building, 5321 Route 982, through Jan. 31 (open drop off). Officials also reminded residents to remove vehicles and portable basketball hoops off the roads, and to not throw snow onto township rights of way.

While most of Ligonier Township’s staff and appointed positions remain unchanged for 2022, officials have decided to begin the new year with a new board chair and solicitor.

The Ligonier Township Board of Supervisors on Monday voted 3-2 to appoint Dan Resenic as its new chairman. Newly-elected supervisor Erik Ross joined supervisors Scott Matson and Resenic in favor of the leadership change, while supervisor Stephanie Verna and previous chairman John Beaufort were opposed.

The board unanimously chose Beaufort as vice chairman and reappointed Verna as secretary-treasurer.

“I look forward to a productive, cooperative and amicable 2022,” Resenic said at the close of the board’s reorganization meeting.

Hudock, who also serves as solicitor for the Ligonier Township Municipal Authority (LTMA), will earn the same $125 hourly rate.

The supervisors retained Ben Faas and Jake Bolby of The EADS Group as the township’s engineers with a $123-$133 contracted hourly rate and a $125 flat meeting rate. Mike D’Arrigo stays as sewage enforcement officer with Apex Engineering as alternate.

Other reappointments included Susan McBroom and Judy Ridgeway to new five-year terms on the township’s planning commission and recreation board, respectively, both expiring at the end of 2026. Linda McDowell will also begin a new four-year term on the zoning hearing board, ending Dec. 31, 2025.

A five-year term remains vacant on the zoning hearing board.

All planning commission and zoning hearing board members will be compensated $30 per meeting. The supervisors will receive annual stipends of $2,500 — to be paid on a quarterly basis — which is the maximum amount allowed under Pennsylvania’s Second Class Township code and approved by Ligonier Township’s three elected auditors.

One of the auditor seats — a six-year term — is also empty. The supervisors hope to gauge interest in the position for discussion at their next meeting.

Chris Light was reappointed for another five-year term on the LTMA board through Dec. 31, 2026. Rick Penrod was appointed chairman of the vacancy board while John Rhodes will continue as chairman for the township’s Agricultural Security Program, along with Lewis Thomas and Alan Smith.

Approved financial services include Berkheimer as collector of Ligonier Township’s Act 511 taxes plus wages and local services taxes, and Wessel & Company as the township’s certified public accountant for the 2021 audit.

The board also set the treasurer’s bond at $600,000 and authorized the following signers for the township’s financial accounts this year: supervisors Beaufort, Verna, Ross and Resenic, plus township manager Terry Carcella. Caldwell as finance officer can view and discuss the accounts.

Verna and Carcella will remain as the chief administrative officers of Ligonier Township’s non-uniformed pension plan for 2022.

Resenic also called for a brief executive session to discuss personnel before the board began its slew of annual appointments.

The township’s other boards will also meet at regularly scheduled days and times, with the planning commission at 7 p.m. on the fourth Thursday and the zoning hearing board at 7 p.m. on the third Tuesday of each month.