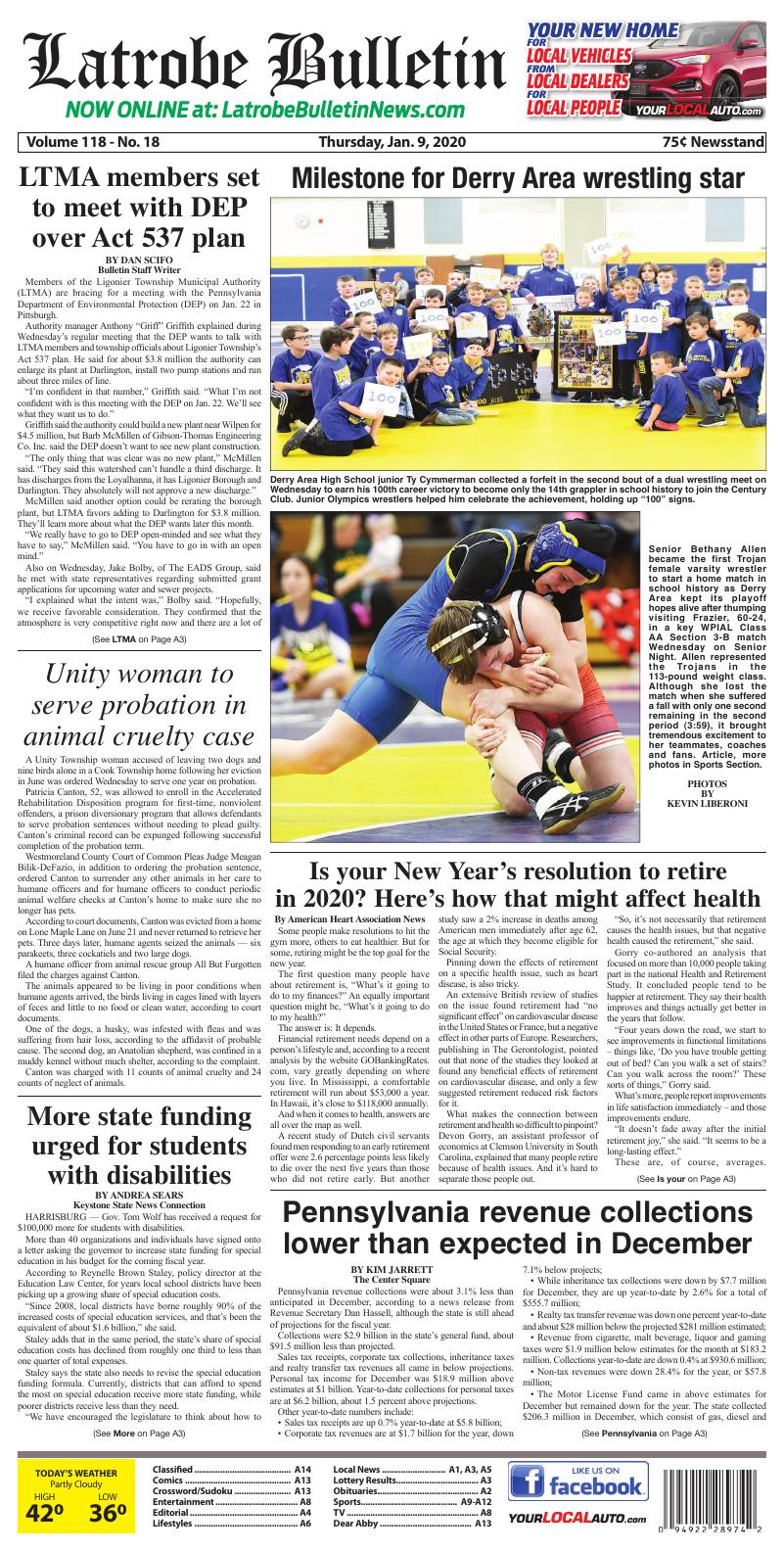 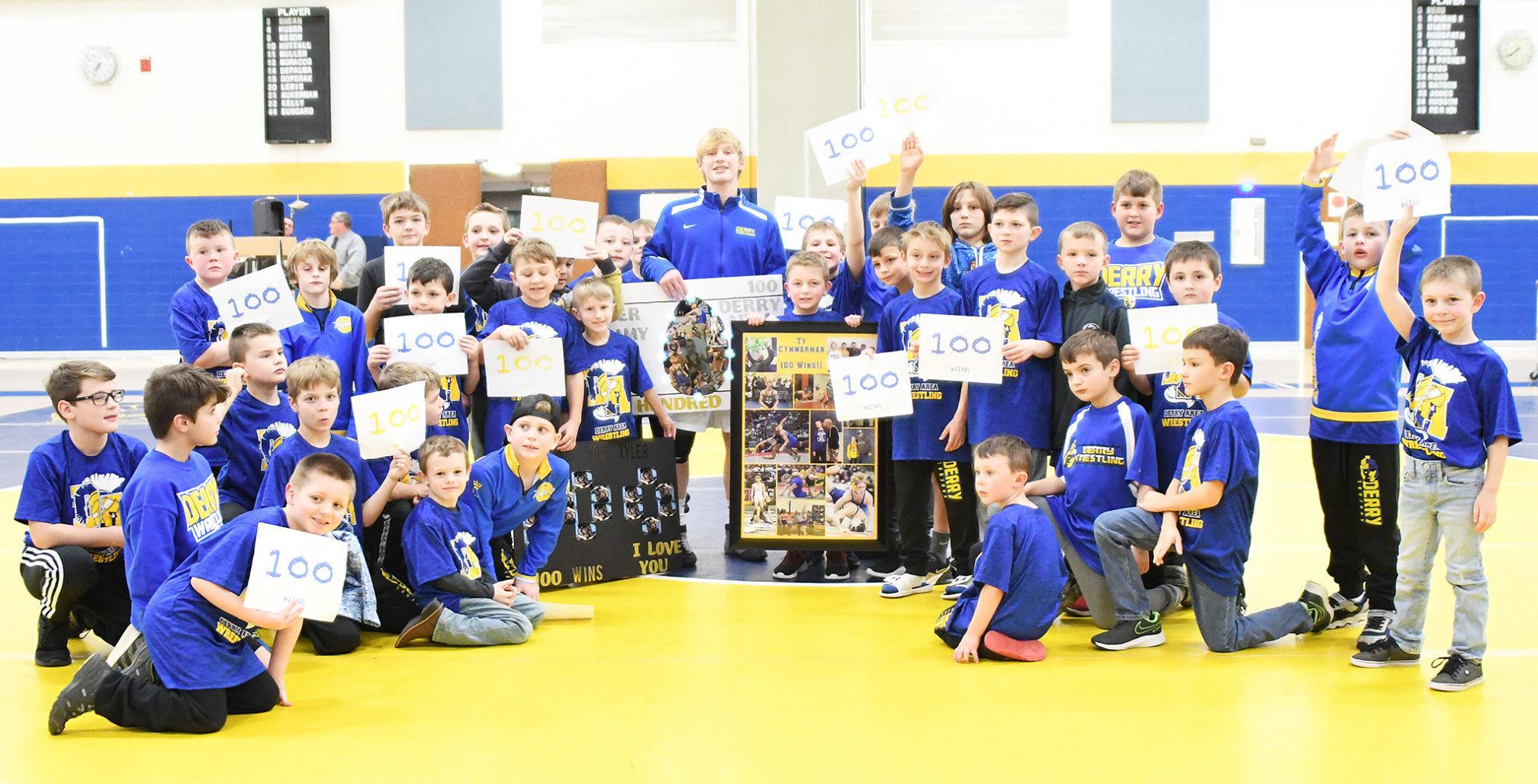 Derry Area High School junior Ty Cymmerman collected a forfeit in the second bout of a dual wrestling meet on Wednesday to earn his 100th career victory to become only the 14th grappler in school history to join the Century Club. Junior Olympics wrestlers helped him celebrate the achievement, holding up “100” signs. 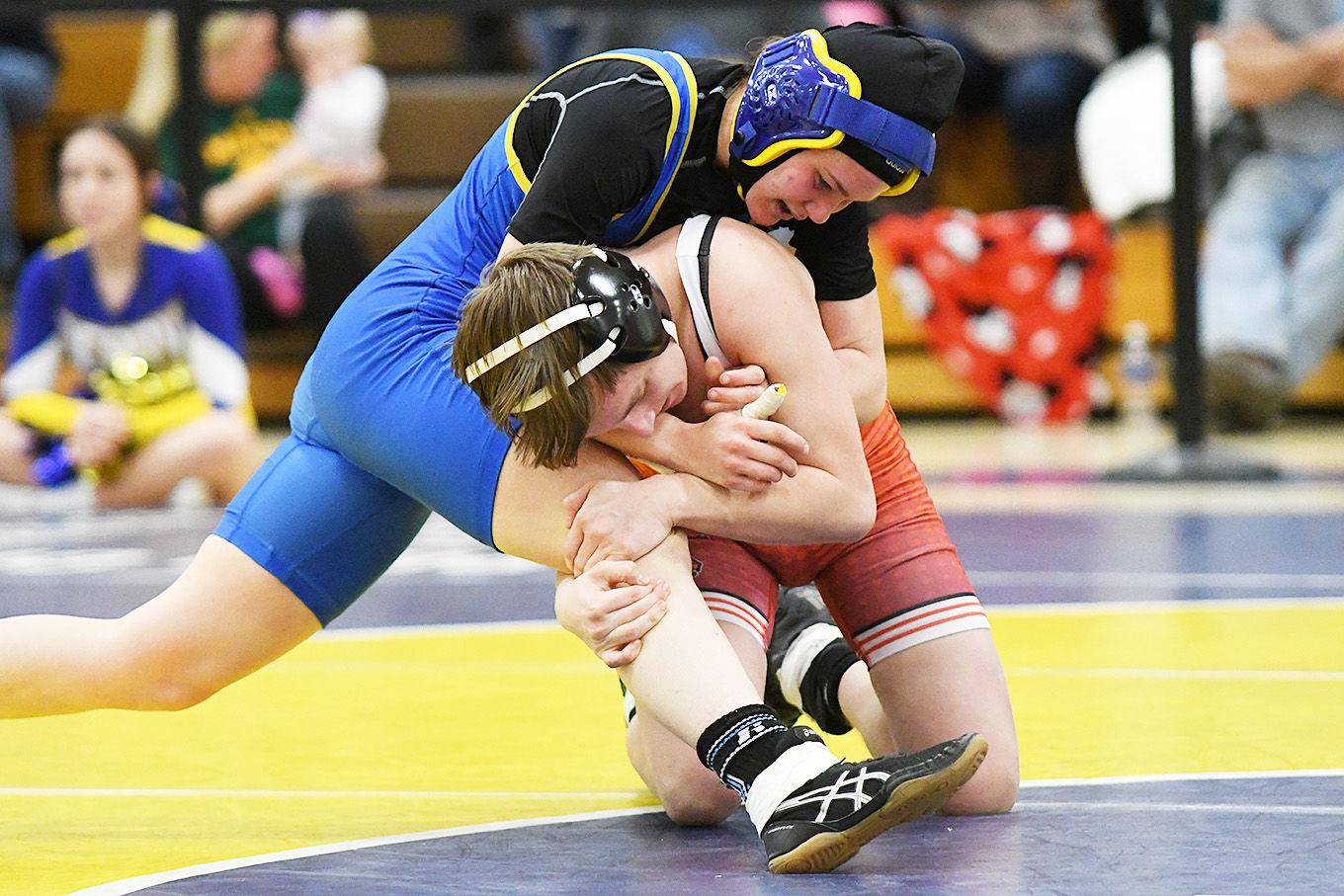 Senior Bethany Allen became the first Trojan female varsity wrestler to start a home match in school history as Derry Area kept its playoff hopes alive after thumping visiting Frazier, 60-24, in a key WPIAL Class AA Section 3-B match Wednesday on Senior Night. Allen represented the Trojans in the 113-pound weight class. Although she lost the match when she suffered a fall with only one second remaining in the second period (3:59), it brought tremendous excitement to her teammates, coaches and fans. Article, more photos in Sports Section.

Pennsylvania revenue collections were about 3.1% less than anticipated in December, according to a news release from Revenue Secretary Dan Hassell, although the state is still ahead of projections for the fiscal year.

Collections were $2.9 billion in the state’s general fund, about $91.5 million less than projected.

Sales tax receipts, corporate tax collections, inheritance taxes and realty transfer tax revenues all came in below projections. Personal tax income for December was $18.9 million above estimates at $1 billion. Year-to-date collections for personal taxes are at $6.2 billion, about 1.5 percent above projections.

Other year-to-date numbers include:

The state’s Independent Fiscal Office noted a variety of trends affecting Pennsylvania revenue, including that personal income growth had slowed to its lowest rate since the fourth quarter of 2017.

Members of the Ligonier Township Municipal Authority (LTMA) are bracing for a meeting with the Pennsylvania Department of Environmental Protection (DEP) on Jan. 22 in Pittsburgh.

Authority manager Anthony “Griff” Griffith explained during Wednesday’s regular meeting that the DEP wants to talk with LTMA members and township officials about Ligonier Township’s Act 537 plan. He said for about $3.8 million the authority can enlarge its plant at Darlington, install two pump stations and run about three miles of line.

“I’m confident in that number,” Griffith said. “What I’m not confident with is this meeting with the DEP on Jan. 22. We’ll see what they want us to do.”

“The only thing that was clear was no new plant,” McMillen said. “They said this watershed can’t handle a third discharge. It has discharges from the Loyalhanna, it has Ligonier Borough and Darlington. They absolutely will not approve a new discharge.”

McMillen said another option could be rerating the borough plant, but LTMA favors adding to Darlington for $3.8 million. They’ll learn more about what the DEP wants later this month.

“We really have to go to DEP open-minded and see what they have to say,” McMillen said. “You have to go in with an open mind.”

Also on Wednesday, Jake Bolby, of The EADS Group, said he met with state representatives regarding submitted grant applications for upcoming water and sewer projects.

“I explained what the intent was,” Bolby said. “Hopefully, we receive favorable consideration. They confirmed that the atmosphere is very competitive right now and there are a lot of applications in.

“It’s competitive, but you can’t get grant money without making an application.”

The authority is seeking grant funding through the H2OPA and PA Small Water & Sewage grant programs. The Small Water & Sewer grant awards between $30,000 and $500,000 and requires a local match of 15% while the H2OPA program is for larger projects — from $500,000 up to $20 million. It requires applicants to provide a 50% match.

The board is seeking $2 million in H2OPA grant funding to replace water lines and meters that are approaching the end of their useful life and submitting an application for funding from the PA Small Water & Sewage grant program for the replacement of pumps at a pump station near the Park Plan area of the township.

Bolby also said a project along Trout Ave. was submitted for Community Development Block Grant (CDBG) funding and it appears as if the application was successful.

“It’s a conditional award at this point,” Bolby said. “They’re confident and they say they believe this project is going to be approved. It met all criteria. They’re expecting within a couple weeks to get an official letter.”

The authority also asked to resubmit its annual 2020 budget. Griffith said the budget is in the negative because of a budgeted figure for a new utility truck.

Also at the meeting, the LTMA board voted Bruce Kemerer as chairman and Chris Light as vice chairman. Members voted Beaufort as secretary and Bill Stablein as treasurer.

Authority members also welcomed Daniel Resenic and thanked Glenn Kalp for his service. They thanked Kalp for 24 years of service and planned to purchase a plaque and signed certificate of appreciation. Members also discussed possibly naming a portion of the reservoir after Kalp for his two-decade-plus tenure of service.

A Unity Township woman accused of leaving two dogs and nine birds alone in a Cook Township home following her eviction in June was ordered Wednesday to serve one year on probation.

Patricia Canton, 52, was allowed to enroll in the Accelerated Rehabilitation Disposition program for first-time, nonviolent offenders, a prison diversionary program that allows defendants to serve probation sentences without needing to plead guilty. Canton’s criminal record can be expunged following successful completion of the probation term.

Westmoreland County Court of Common Pleas Judge Meagan Bilik-DeFazio, in addition to ordering the probation sentence, ordered Canton to surrender any other animals in her care to humane officers and for humane officers to conduct periodic animal welfare checks at Canton’s home to make sure she no longer has pets.

According to court documents, Canton was evicted from a home on Lone Maple Lane on June 21 and never returned to retrieve her pets. Three days later, humane agents seized the animals — six parakeets, three cockatiels and two large dogs.

A humane officer from animal rescue group All But Furgotten filed the charges against Canton.

The animals appeared to be living in poor conditions when humane agents arrived, the birds living in cages lined with layers of feces and little to no food or clean water, according to court documents.

One of the dogs, a husky, was infested with fleas and was suffering from hair loss, according to the affidavit of probable cause. The second dog, an Anatolian shepherd, was confined in a muddy kennel without much shelter, according to the complaint.

Canton was charged with 11 counts of animal cruelty and 24 counts of neglect of animals.

HARRISBURG — Gov. Tom Wolf has received a request for $100,000 more for students with disabilities.

More than 40 organizations and individuals have signed onto a letter asking the governor to increase state funding for special education in his budget for the coming fiscal year.

According to Reynelle Brown Staley, policy director at the Education Law Center, for years local school districts have been picking up a growing share of special education costs.

“Since 2008, local districts have borne roughly 90% of the increased costs of special education services, and that’s been the equivalent of about $1.6 billion,” she said.

Staley adds that in the same period, the state’s share of special education costs has declined from roughly one third to less than one quarter of total expenses.

“We have encouraged the legislature to think about how to ensure that those funds that they are allocating are directed to the districts and to the students with the greatest needs,” she said.

Education advocates also are urging lawmakers to close the gap in basic education funding that has grown to almost $4 billion.

Staley says the bottom line is Pennsylvania needs to invest more to ensure that the state’s 270,000 students with disabilities are getting the education services they are legally entitled to receive. 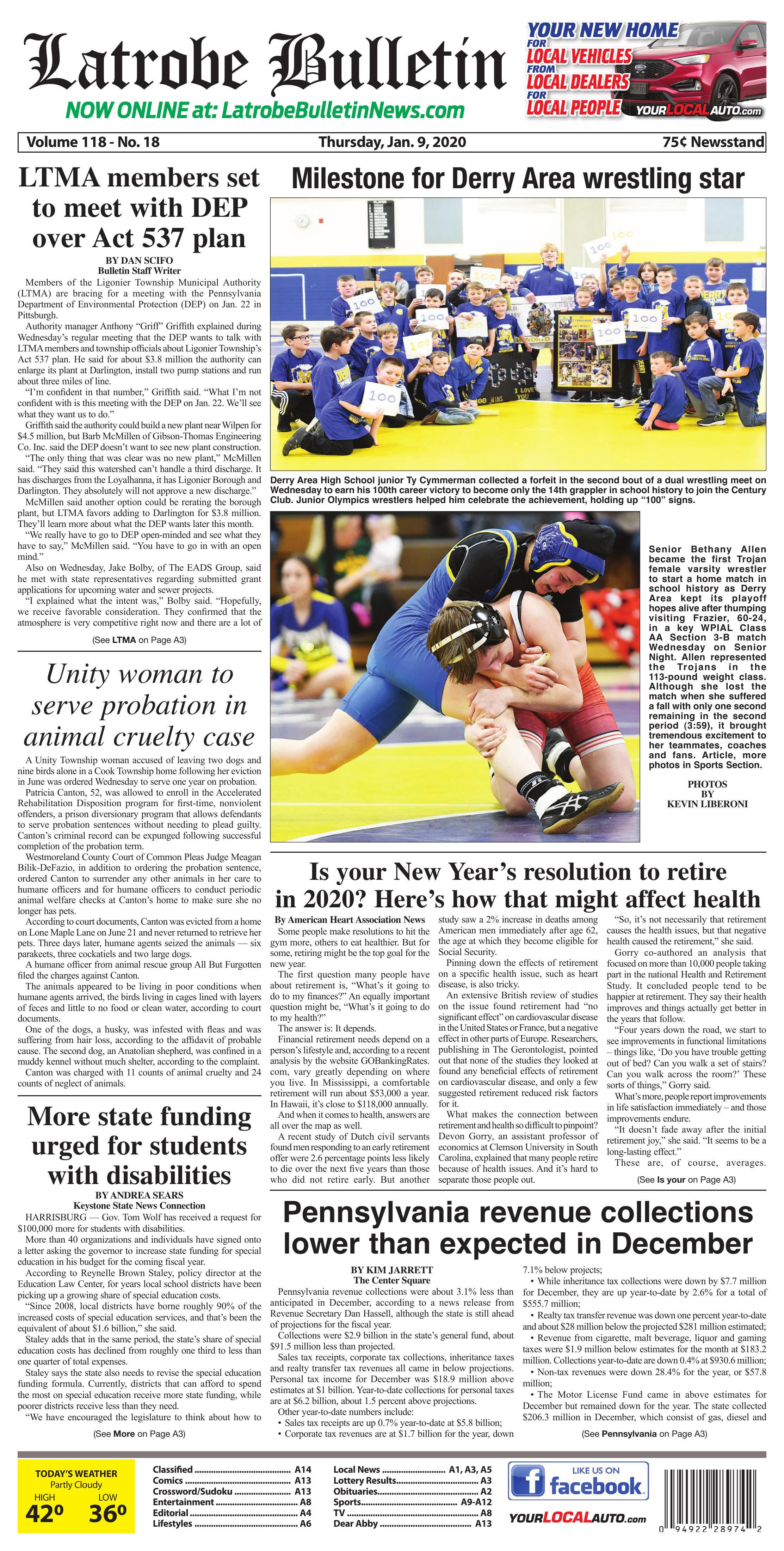