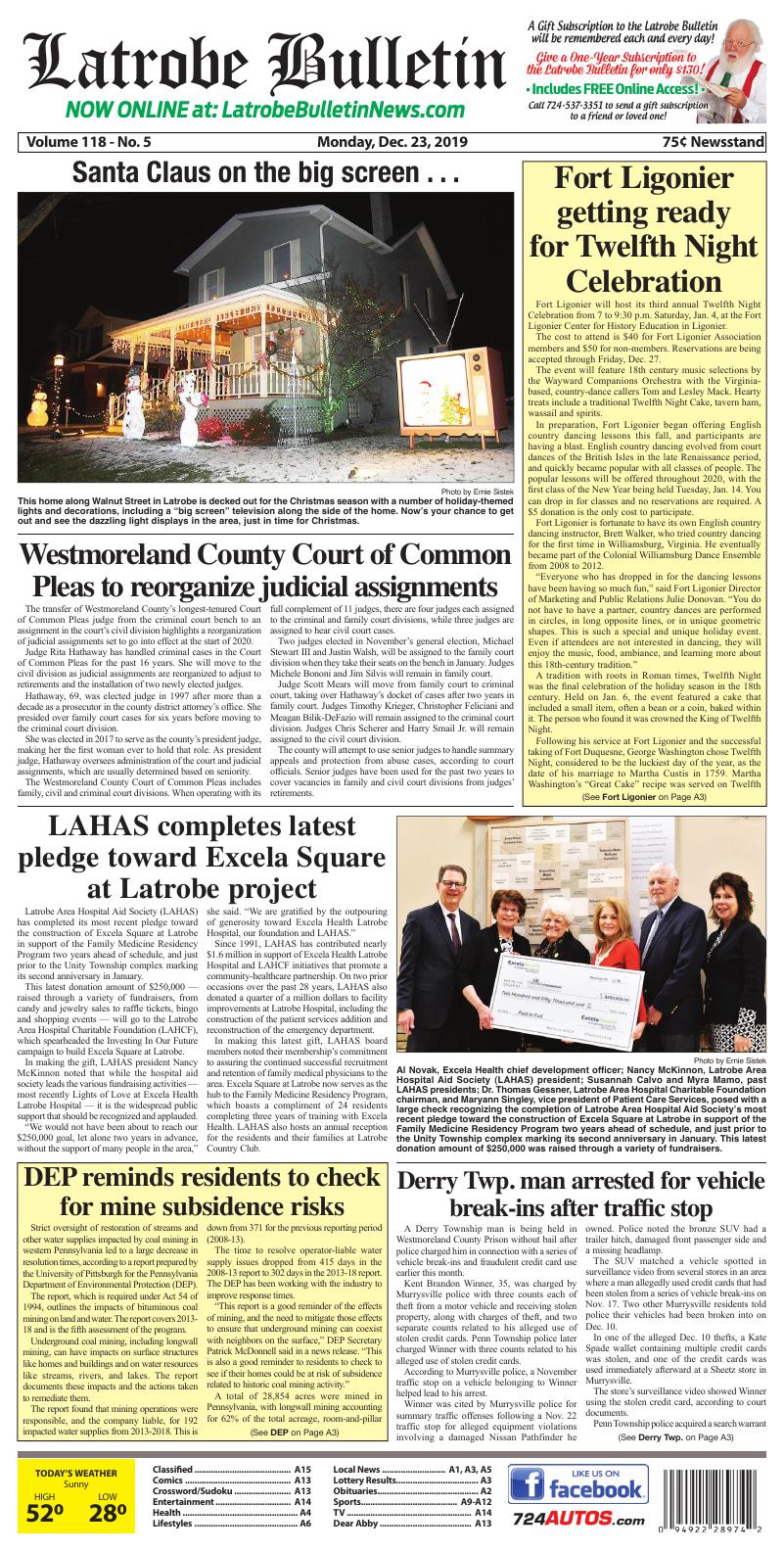 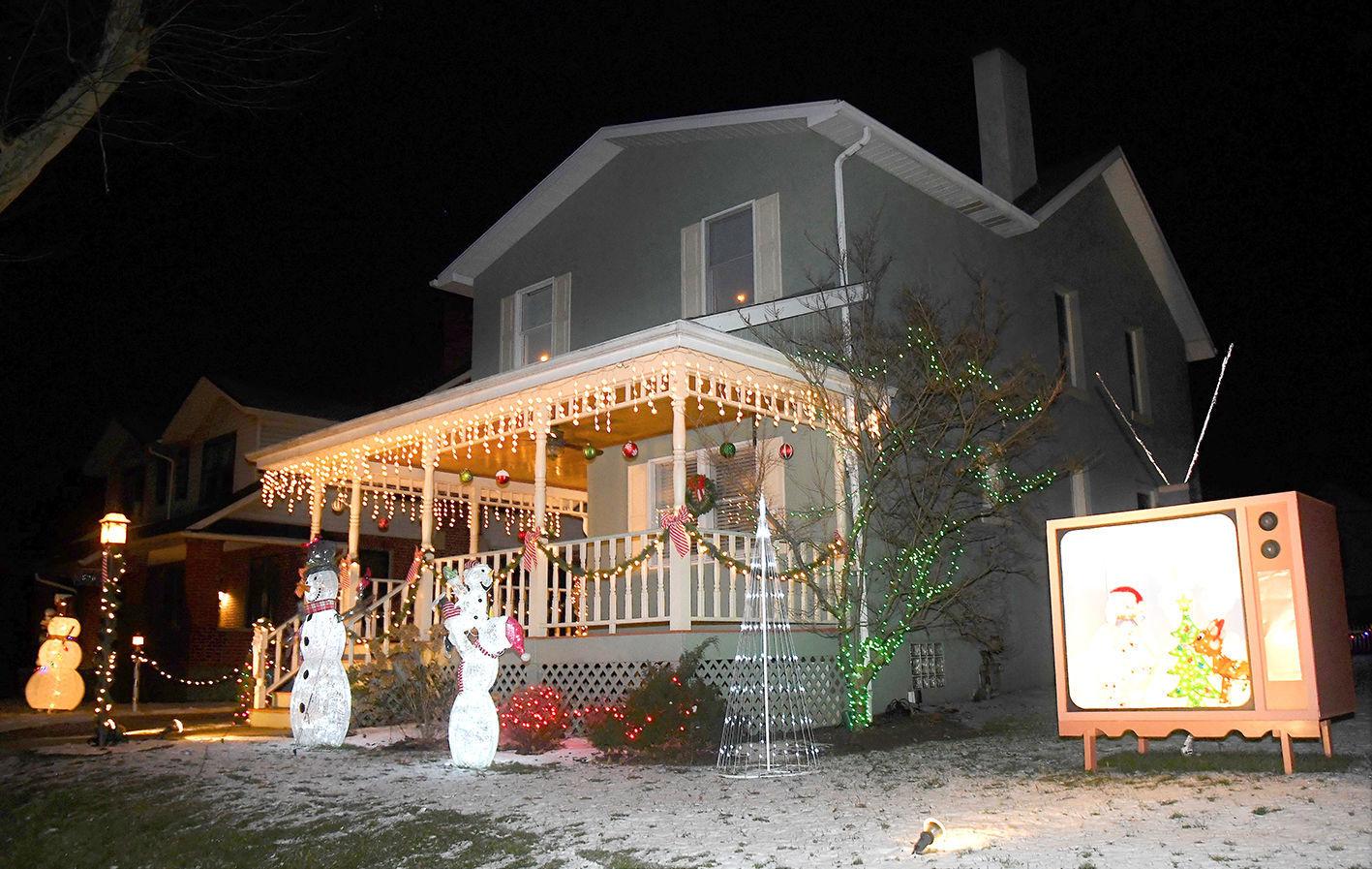 This home along Walnut Street in Latrobe is decked out for the Christmas season with a number of holiday-themed lights and decorations, including a “big screen” television along the side of the home. Now’s your chance to get out and see the dazzling light displays in the area, just in time for Christmas.

The transfer of Westmoreland County’s longest-tenured Court of Common Pleas judge from the criminal court bench to an assignment in the court’s civil division highlights a reorganization of judicial assignments set to go into effect at the start of 2020.

Judge Rita Hathaway has handled criminal cases in the Court of Common Pleas for the past 16 years. She will move to the civil division as judicial assignments are reorganized to adjust to retirements and the installation of two newly elected judges.

Hathaway, 69, was elected judge in 1997 after more than a decade as a prosecutor in the county district attorney’s office. She presided over family court cases for six years before moving to the criminal court division.

She was elected in 2017 to serve as the county’s president judge, making her the first woman ever to hold that role. As president judge, Hathaway oversees administration of the court and judicial assignments, which are usually determined based on seniority.

The Westmoreland County Court of Common Pleas includes family, civil and criminal court divisions. When operating with its full complement of 11 judges, there are four judges each assigned to the criminal and family court divisions, while three judges are assigned to hear civil court cases.

Two judges elected in November’s general election, Michael Stewart III and Justin Walsh, will be assigned to the family court division when they take their seats on the bench in January. Judges Michele Bononi and Jim Silvis will remain in family court.

The county will attempt to use senior judges to handle summary appeals and protection from abuse cases, according to court officials. Senior judges have been used for the past two years to cover vacancies in family and civil court divisions from judges’ retirements.

Latrobe Area Hospital Aid Society (LAHAS) has completed its most recent pledge toward the construction of Excela Square at Latrobe in support of the Family Medicine Residency Program two years ahead of schedule, and just prior to the Unity Township complex marking its second anniversary in January.

This latest donation amount of $250,000 — raised through a variety of fundraisers, from candy and jewelry sales to raffle tickets, bingo and shopping events — will go to the Latrobe Area Hospital Charitable Foundation (LAHCF), which spearheaded the Investing In Our Future campaign to build Excela Square at Latrobe.

In making the gift, LAHAS president Nancy McKinnon noted that while the hospital aid society leads the various fundraising activities — most recently Lights of Love at Excela Health Latrobe Hospital — it is the widespread public support that should be recognized and applauded.

“We would not have been about to reach our $250,000 goal, let alone two years in advance, without the support of many people in the area,” she said. “We are gratified by the outpouring of generosity toward Excela Health Latrobe Hospital, our foundation and LAHAS.”

Since 1991, LAHAS has contributed nearly $1.6 million in support of Excela Health Latrobe Hospital and LAHCF initiatives that promote a community-healthcare partnership. On two prior occasions over the past 28 years, LAHAS also donated a quarter of a million dollars to facility improvements at Latrobe Hospital, including the construction of the patient services addition and reconstruction of the emergency department.

In making this latest gift, LAHAS board members noted their membership’s commitment to assuring the continued successful recruitment and retention of family medical physicians to the area. Excela Square at Latrobe now serves as the hub to the Family Medicine Residency Program, which boasts a compliment of 24 residents completing three years of training with Excela Health. LAHAS also hosts an annual reception for the residents and their families at Latrobe Country Club.

Strict oversight of restoration of streams and other water supplies impacted by coal mining in western Pennsylvania led to a large decrease in resolution times, according to a report prepared by the University of Pittsburgh for the Pennsylvania Department of Environmental Protection (DEP).

The report, which is required under Act 54 of 1994, outlines the impacts of bituminous coal mining on land and water. The report covers 2013-18 and is the fifth assessment of the program.

Underground coal mining, including longwall mining, can have impacts on surface structures like homes and buildings and on water resources like streams, rivers, and lakes. The report documents these impacts and the actions taken to remediate them.

The report found that mining operations were responsible, and the company liable, for 192 impacted water supplies from 2013-2018. This is down from 371 for the previous reporting period (2008-13).

The time to resolve operator-liable water supply issues dropped from 415 days in the 2008-13 report to 302 days in the 2013-18 report. The DEP has been working with the industry to improve response times.

“This report is a good reminder of the effects of mining, and the need to mitigate those effects to ensure that underground mining can coexist with neighbors on the surface,” DEP Secretary Patrick McDonnell said in a news release. “This is also a good reminder to residents to check to see if their homes could be at risk of subsidence related to historic coal mining activity.”

A total of 28,854 acres were mined in Pennsylvania, with longwall mining accounting for 62% of the total acreage, room-and-pillar mining 29% and pillar recovery 9%. This reflects a 7% decrease from the previous five-year reporting period, even though more mines are in operation.

Cracked foundations, collapsed walls and even homes sinking into the ground are all possible impacts of underground mine subsidence, which is not typically covered by homeowner’s insurance policies. A subsidence event can occur at any time and cause sudden, significant damage, often exceeding $100,000 or total loss of the structure. Mine subsidence occurs when the ground above an old or abandoned mine cavity collapses.

DEP administers low-cost mine subsidence insurance (MSI) coverage through the Commonwealth of Pennsylvania. The average policy of $160,000 costs about $7 per month, and senior citizens are eligible for discounted rates.

The 2013-2018 Act 54 Coal Mining Report and more on Mine Subsidence Insurance, including a Risk Assessment Tool, can be found on the DEP website at www.dep.pa.gov.

Fort Ligonier will host its third annual Twelfth Night Celebration from 7 to 9:30 p.m. Saturday, Jan. 4, at the Fort Ligonier Center for History Education in Ligonier.

The cost to attend is $40 for Fort Ligonier Association members and $50 for non-members. Reservations are being accepted through Friday, Dec. 27.

In preparation, Fort Ligonier began offering English country dancing lessons this fall, and participants are having a blast. English country dancing evolved from court dances of the British Isles in the late Renaissance period, and quickly became popular with all classes of people. The popular lessons will be offered throughout 2020, with the first class of the New Year being held Tuesday, Jan. 14. You can drop in for classes and no reservations are required. A $5 donation is the only cost to participate.

Fort Ligonier is fortunate to have its own English country dancing instructor, Brett Walker, who tried country dancing for the first time in Williamsburg, Virginia. He eventually became part of the Colonial Williamsburg Dance Ensemble from 2008 to 2012.

“Everyone who has dropped in for the dancing lessons have been having so much fun,” said Fort Ligonier Director of Marketing and Public Relations Julie Donovan. “You do not have to have a partner, country dances are performed in circles, in long opposite lines, or in unique geometric shapes. This is such a special and unique holiday event. Even if attendees are not interested in dancing, they will enjoy the music, food, ambiance, and learning more about this 18th-century tradition.”

A tradition with roots in Roman times, Twelfth Night was the final celebration of the holiday season in the 18th century. Held on Jan. 6, the event featured a cake that included a small item, often a bean or a coin, baked within it. The person who found it was crowned the King of Twelfth Night.

Following his service at Fort Ligonier and the successful taking of Fort Duquesne, George Washington chose Twelfth Night, considered to be the luckiest day of the year, as the date of his marriage to Martha Custis in 1759. Martha Washington’s “Great Cake” recipe was served on Twelfth Night at Mount Vernon and included 40 eggs, four pounds each of sugar and butter, five pounds each of flour and dried fruit, and copious amounts of wine and brandy. Fort Ligonier’s Director of History and Collections Dr. Erica I. Nuckles spends several days creating Martha’s cake for Fort Ligonier’s Twelfth Night Celebration.

Attire for the event is your finest 18th-century clothing or 21st-century cocktail attire. For more information on Fort Ligonier’s Twelfth Night Celebration, visit fortligonier.org or call 724-238-9701.

A Derry Township man is being held in Westmoreland County Prison without bail after police charged him in connection with a series of vehicle break-ins and fraudulent credit card use earlier this month.

According to Murrysville police, a November traffic stop on a vehicle belonging to Winner helped lead to his arrest.

Winner was cited by Murrysville police for summary traffic offenses following a Nov. 22 traffic stop for alleged equipment violations involving a damaged Nissan Pathfinder he owned. Police noted the bronze SUV had a trailer hitch, damaged front passenger side and a missing headlamp.

The SUV matched a vehicle spotted in surveillance video from several stores in an area where a man allegedly used credit cards that had been stolen from a series of vehicle break-ins on Nov. 17. Two other Murrysville residents told police their vehicles had been broken into on Dec. 10.

Penn Township police Detective Brad Buchsbaum wrote in court documents that during the search, Winner’s girlfriend told investigators that he had committed the vehicle break-ins and used the stolen credit cards. Police found a stolen .38-caliber handgun while searching the home, as well as a guitar and case that had been reported stolen from a vehicle in Baldwin Township.

Winner was arraigned Dec. 12 on the initial charge of unauthorized use of an access device, Dec. 17 on the remaining Murrysville charges and Dec. 19 on the Penn Township charges. 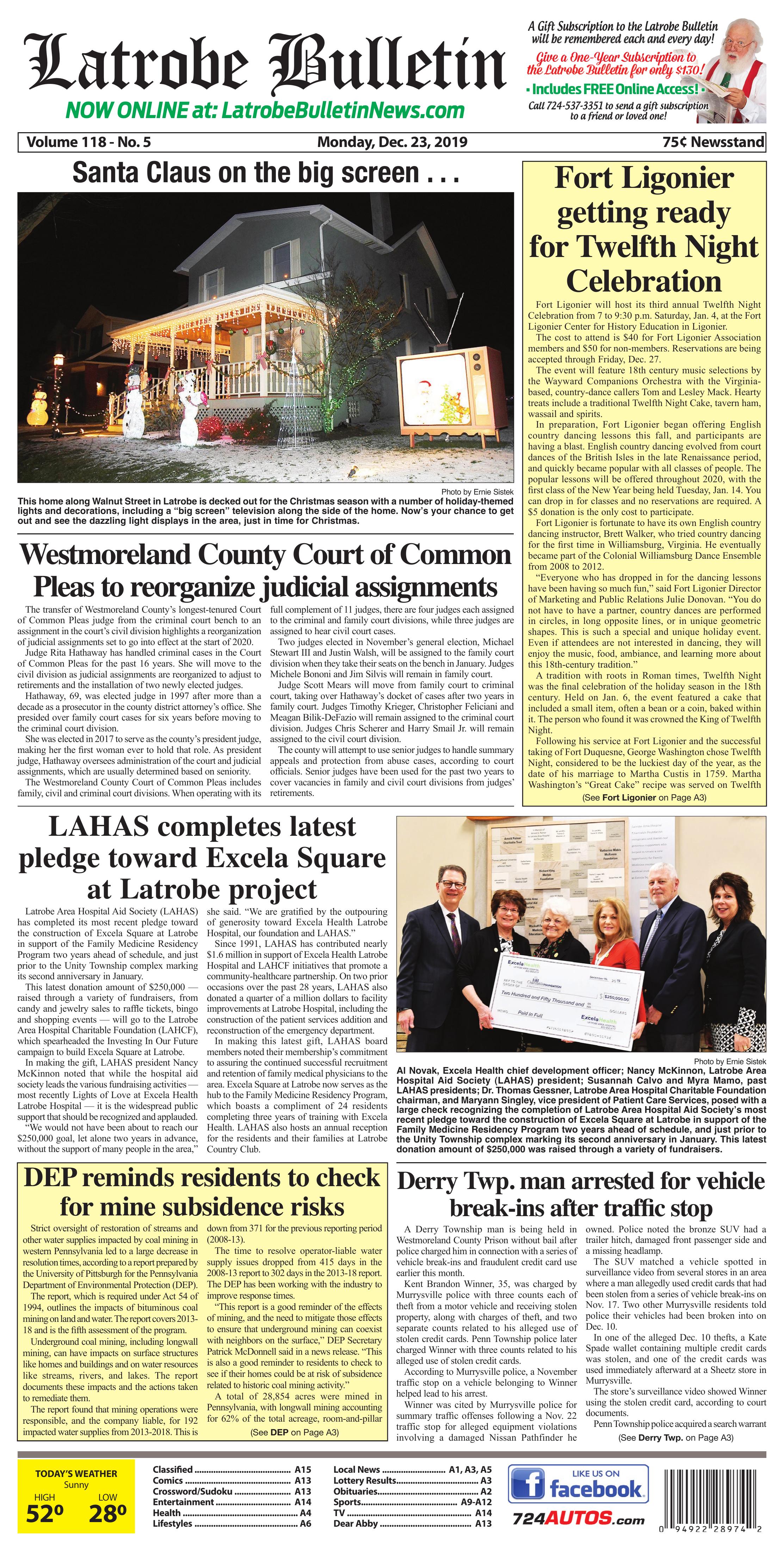