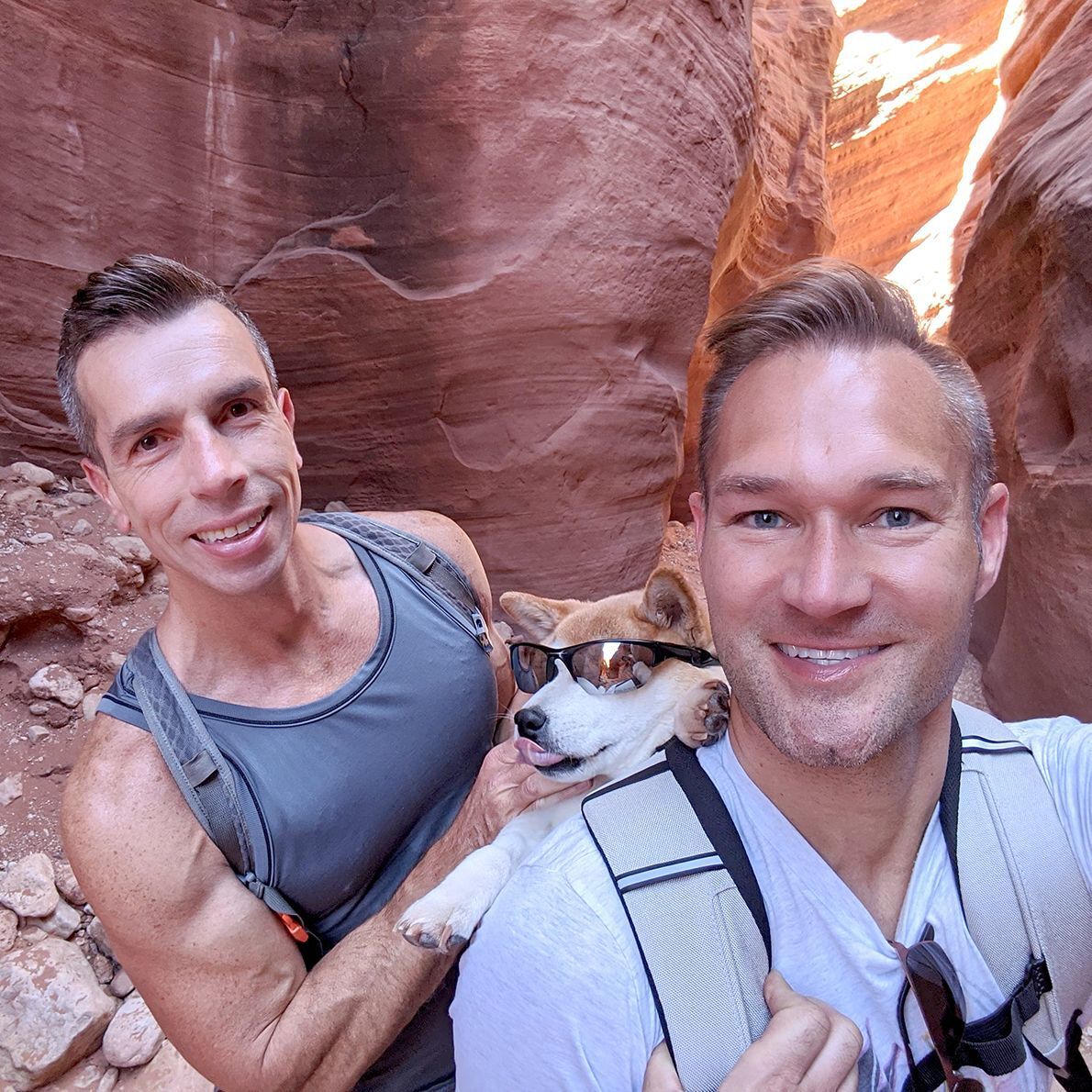 Ricardo Lima and Jeff Ramsey, a Derry native, take a selfie with their dog, Crush. 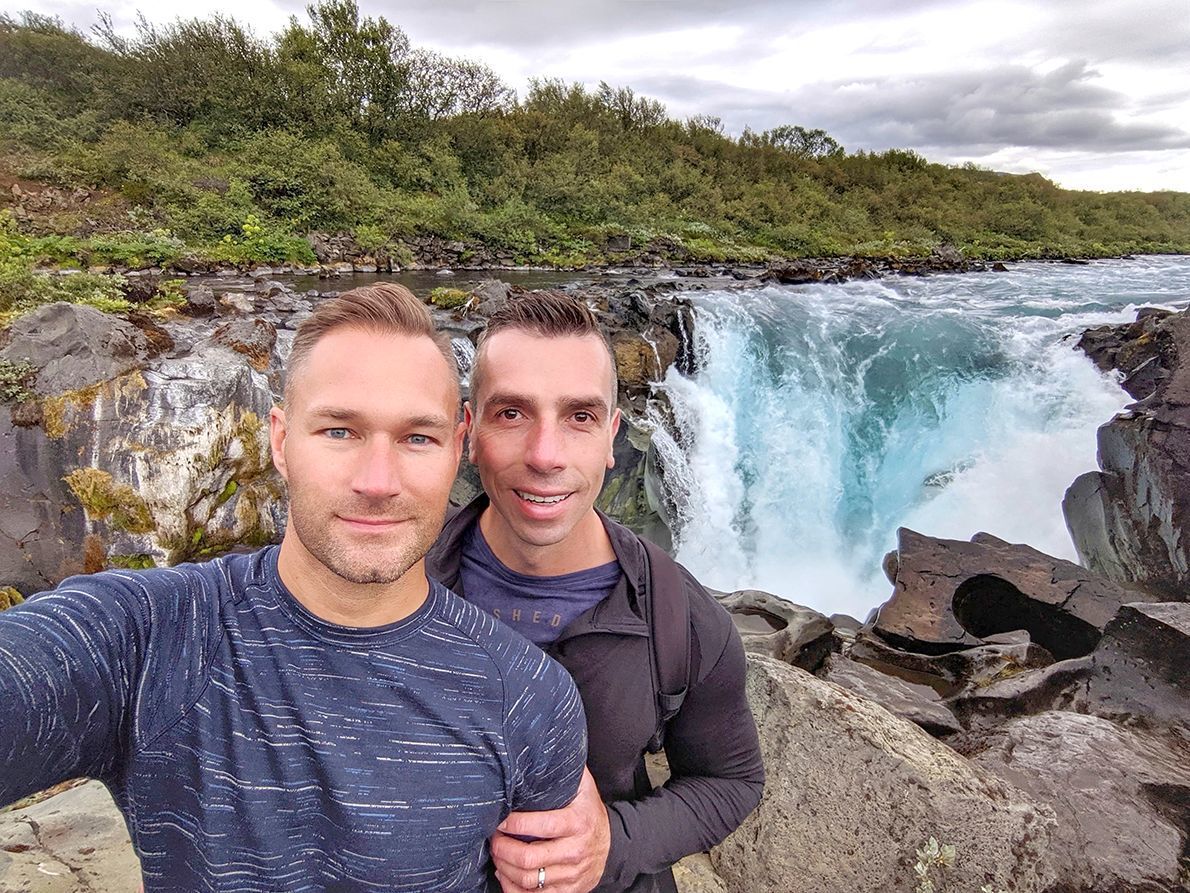 Jeff Ramsey, a Derry native, and Ricardo Lima (right) live in California where they participated in Pfizer's COVID-19 vaccine trial at Diablo Clinical Research, Inc., in Walnut Creek, California, not far from where the couple lives.

Ricardo Lima and Jeff Ramsey, a Derry native, take a selfie with their dog, Crush.

Jeff Ramsey, a Derry native, and Ricardo Lima (right) live in California where they participated in Pfizer's COVID-19 vaccine trial at Diablo Clinical Research, Inc., in Walnut Creek, California, not far from where the couple lives.

Jeff Ramsey didn’t hesitate to sign up when Pfizer Inc. put out a call for volunteers for a clinical trial for the newly developed COVID-19 vaccine.

There was also another reason. He and his husband Ricardo Lima like to travel, and getting the vaccine early on would put them a few steps ahead when more travel opportunities open up.

Ramsey, 43, who lives in San Francisco, is the son of Carol Ramsey of Derry and is a 1995 graduate of Derry Area High School. He works in information technology, met Lima on a business trip and stayed in California.

“When we started the trial, we were already six months into sheltering in place, and we were looking for anything to return to normal for ourselves and for everyone,” he told the Bulletin in a phone interview from the West Coast.

Pfizer, which has global headquarters in New York City, was conducting nationwide trials to “study the safety, tolerability, immunogenicity and efficacy of RNA vaccine candidates against COVID-19 in healthy individuals,” according to their website. One of the locations was at Diablo Clinical Research, Inc., in Walnut Creek, California, not far from where the couple lives.

“There were some who were skeptical, and at the time it wasn’t quite clear to people that the vaccine that they are administering doesn’t contain the actual virus,” Ramsey said. “Rather, it has the body create antibodies to protect it from the virus.”

Lima made first contact with the research clinic in September. Ramsey followed a couple of days later. Volunteers had to be cleared through blood screenings and physical exams that included a test for COVID-19 that was given at each visit. Qualified candidates entered a double blind study. That is, they did not know if they received the vaccine or a placebo.

“As it turned out, Ricardo received the placebo and I had the actual vaccine,” Ramsey said about the two injections that they each received in October.

They suspected that early on because Lima did not experience any side effects from the second dose. But the day after his second dose, Ramsey had a short bout of mild fever and body aching.

“We didn’t know for sure, though, about Ricardo because he could have just not had a reaction if it was the actual vaccine,” Ramsey said.

They went on their own to another doctor to have antibody tests that verified what they suspected.

“Now since that part of the trial is officially over, they unblinded the study,” Ramsey said. Now they know for sure.

Lima will be inoculated with the vaccine at his upcoming six-month checkup.

Ramsey plans to remain in the study for two years. During that time he will have blood drawn every six months to check the level of antibodies that still exist. That part of the study is to investigate the long-term effect of the vaccine. He also answers a short questionnaire every week.

“It was definitely fascinating to be part of the clinical trials,” he said. “It moved very quickly and I think that had some people scared. But it was done methodically and I am very comfortable with how things are going. I think that people should not be afraid of the vaccine, and should consider what they are doing for other people. You are preventing yourself from being a spreader of the virus, and you will be protecting your loved ones. I think everyone just needs to consider doing their part. The sooner we get this under control, the sooner people can return to a normal life.”