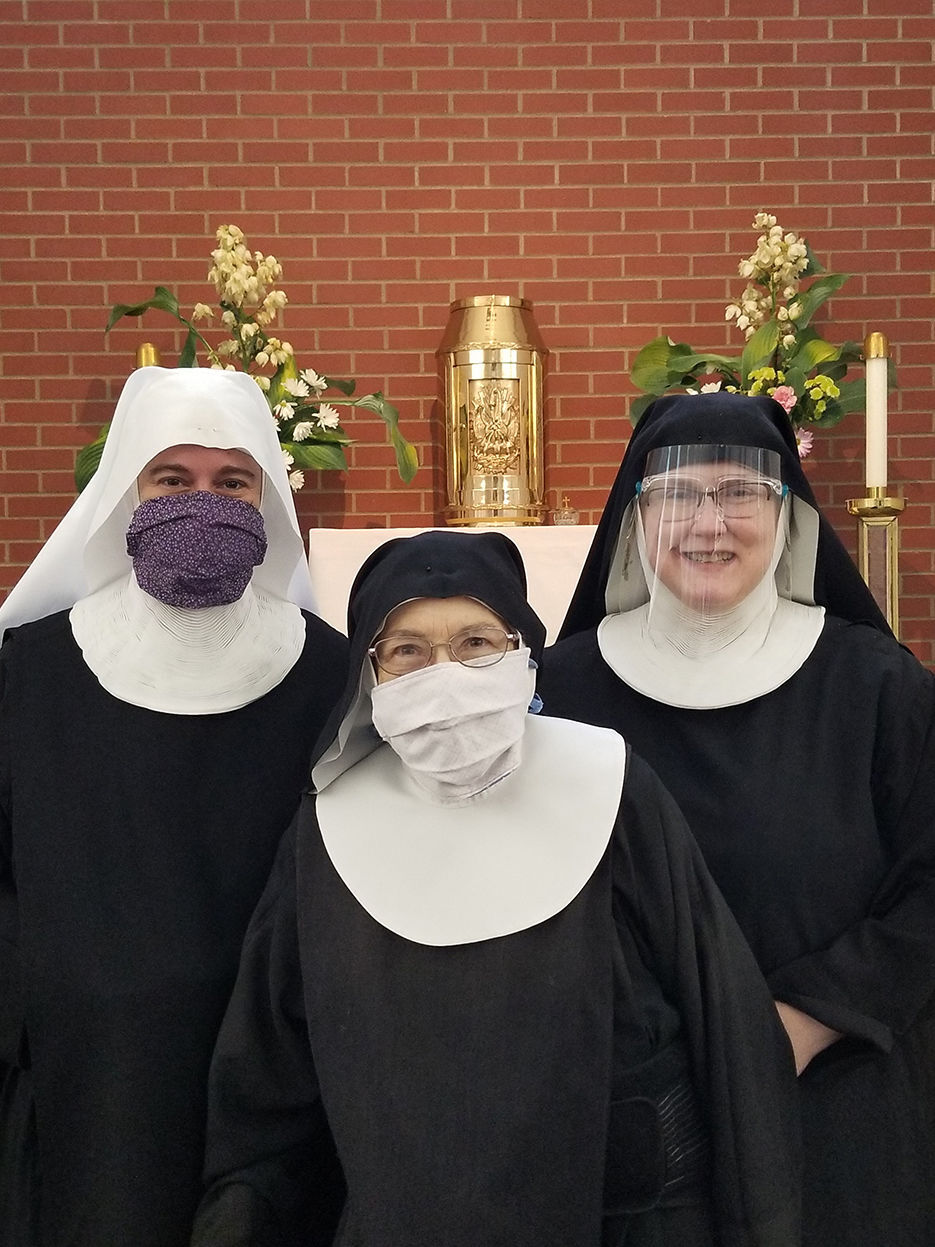 Sister Audrey Jensen, novice, Sister Petra Littlejohn, OSB, and Sister Maria Johanna Uhlott, OSB, are among the cloistered nuns at Sisters of St. Benedict of St. Emma Monastery in Hempfield Township who have adjusted to the COVID-19 pandemic’s restrictions. 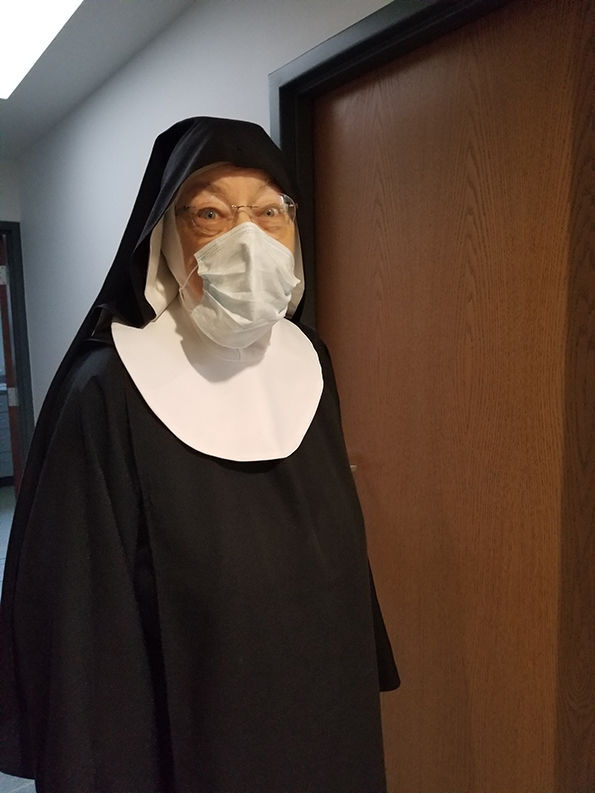 Sister Margoretta Judy OSB is among the cloistered nuns at Sisters of St. Benedict of St. Emma Monastery in Hempfield Township who have adjusted to the COVID-19 pandemic's restrictions.

Sister Audrey Jensen, novice, Sister Petra Littlejohn, OSB, and Sister Maria Johanna Uhlott, OSB, are among the cloistered nuns at Sisters of St. Benedict of St. Emma Monastery in Hempfield Township who have adjusted to the COVID-19 pandemic’s restrictions.

Sister Margoretta Judy OSB is among the cloistered nuns at Sisters of St. Benedict of St. Emma Monastery in Hempfield Township who have adjusted to the COVID-19 pandemic's restrictions.

St. Benedict of Nursia in the Sixth Century founded communities of monks in Italy, and as their leader he wrote extensively about how the men, and later the women, should conduct themselves in all aspects of community life.

Among other directives in what became known as The Rule of St. Benedict, the Benedictines are to pray and work, and to always observe that all guests who present themselves are to be welcomed as Christ.

The Benedictines are known for that hospitality. But with people staying home and practicing social distancing because of COVID-19, the Sisters of St. Benedict of St. Emma Monastery have not seen many guests since March.

It’s business as usual for the religious parts of the lives of the cloistered nuns who seldom leave the community in Hempfield north of Greensburg.

“We are basically the same center of monastic life that we have been for 100 years,” said Mother Mary Anne Noll, OSB, the prioress. “We always get up at the same time, and we have always thought that it was essential that we are at our posts praying for the church and the world.”

What’s changed for them is that the shutdown and slowdown cut off sales in their two gift shops that temporarily closed, and caused them to cancel popular fundraisers and retreats that are an essential part of supporting the community. The annual flea market brings in nearly $30,000, the annual dinner raises $20,000, and the quarterly book sales raise thousands of dollars each time they’re held. They also had to cancel scheduled retreats and other group activities, and stop welcoming guests at their Robertshaw Country House Bed and Breakfast.

Daily Mass came to a halt to protect the nuns and also the priests who came from St. Vincent Archabbey where many monks are elderly and could be at risk. The nuns were able to have communion with consecrated hosts that they already had, and they continued their community prayers throughout the day. Outsiders in the past frequently attended the Masses and liturgy of the hours, but they were not permitted to do so during the shutdown.

When Audrey Jensen became a novice with the community (making her number six), her brother and his fiancée were the only outsiders permitted to attend.

Volunteers stayed away, except for doing yard work and other outside chores, and the nuns suspended collecting books and flea market items for their sales. People stopped knocking on the doors for someone to talk to, or to ask for food or for prayers.

Instead, they have been calling or writing letters.

“People find themselves in terrible situations and ask us for prayers,” Mother Mary Anne said. “They have terrible illnesses in their families, every kind of cancer. People are in desperate straits because they lost their jobs. Then there’s such a terrible amount of abuse that goes on. People write to us and tell us their stories. It’s so personal it’s like they are sitting on the living room couch.”

It works both ways.

Some call to check on the nuns to see how they’re doing. Others drop off things, like the woman who rang the doorbell and left little figures of nuns because, she later told them, “Jesus wants you to smile.”

Other people send donations equal to what they would have spent anyway at the cancelled flea market, book sale or annual dinner.

The nuns have done their best to fill in the gaps. During Holy Week, they wove palms and sent them out to friends of the community. The Rev. Boniface Hicks, OSB, from St. Vincent Archabbey livestreamed a day of reflection.

They turned to the internet and television for Mass and other spiritual experiences.

“On Sundays, we watched Mass online with Bishop Malesic, and then during Holy Week, we went to Mass with Pittsburgh’s Bishop Zubic,” Mother Mary Anne said. “On Good Friday, we went to the Vatican, and on Holy Saturday night, we went to a very old cathedral in the Archdiocese of Philadelphia. We had very special permission to have Mass here, just for us, on Easter Sunday.”

Things are picking up. Masses and smaller retreats are being scheduled in accordance with group and distancing guidelines, and the annual golf outing in August will feature a tailgate party instead of an indoor sit-down meal. The shops will be opening, and the nuns and volunteers are hoping that events can be rescheduled.

Mother Mary Anne has seen people changing because of the pandemic.

People are lonely, she noted, and are realizing the importance of coming together as a group, including to share their faith. They are also looking more seriously at their own mortality.

“People have died before, and people die every day, but for the first time for a lot of people, death has become real. It has reminded them that they are mortal,” she said. “And it’s un-American to have something that we can’t fix.”

People have shared with her that they really don’t want to go back to where they were before when they worried about getting their nails or hair done, or going to restaurants and sports events. Many found a more prayerful and reflective life in their solitude, and a greater appreciation for what they have.

“Being impacted by the COVID-19 pandemic in various ways makes us nuns members of the human race and gives us a hint of what other people face and how it changes,” Mother Mary Ann said. “Otherwise, people would think that faith is a life insurance policy against life. Bad things do happen to good people. Look at Jesus.”

Benedictine nuns survived the bubonic plague, she added, and one of their founding sisters from Germany lost her parents and an infant sister in the 1918 flu pandemic.

“As far as how we are doing, we are a monastery and we lived through this God only knows how many time before, and we’ll live through it again,” Mother Mary Anne said. “It’s not the end of the world.”